EXCLUSIVE EXCERPT: “I created Shanna to be a very intelligent woman.” 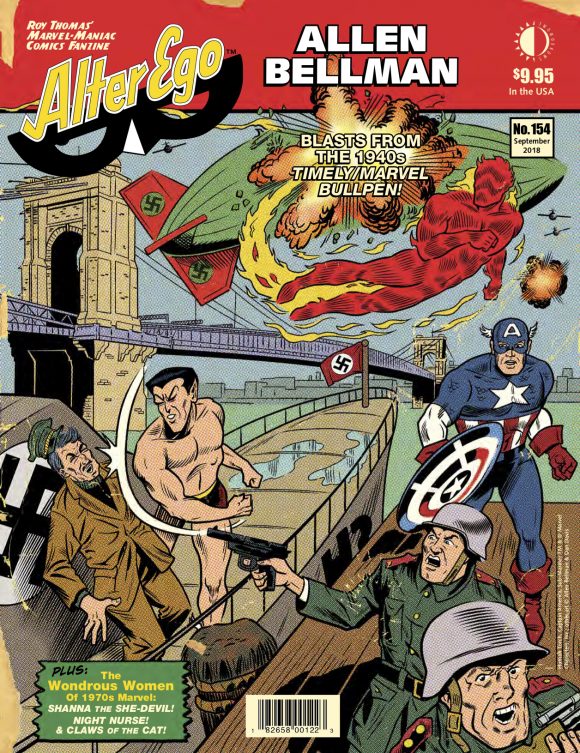 Alter Ego #154, out now from TwoMorrows, covers a lot of ground, from an interview with Golden Age stalwart Allen Bellman, to another excerpt from John Broome’s memoir, to a series of profiles on Marvel’s women creators and characters of the early ’70s.

Check out the table contents: In one of the profiles — by writer Richard Arndt — former comics scribe Carole Seuling, the ex of late comics-biz pioneer Phil Seuling, discusses her claim to Marvel fame: the creation of Shanna the She-Devil.

(The interview begins with a discussion of Carole’s early years in comics before segueing into Shanna. — DG)

Carole Seuling: The way I got involved in writing Shanna the She-Devil was that Roy Thomas and my husband and I were very good friends. I still visit Roy when I go down to Florida and back. I still see him twice a year. He’s on my route! We talk about the old days. So Stan Lee had this idea that he wanted more female heroes in the Marvel Universe, and he wanted them written by women. So Roy kind of drafted me for it. I enjoyed it very much.

Richard Arndt: Of all the female super-heroes that they did—and to be honest, they didn’t do a tremendous number of them—they did three or four, but Shanna’s lasted the longest.

Seuling: She’s been doing guest shots for many years. I understand the super-villain I created for her book, the Mandrill, has lasted a long time as well. …

Arndt: She had a few more solo adventures in the black-&-white magazine Savage Tales, and then she started teaming up with Ka-Zar.

Seuling: They got married and had a child, right?

Arndt: I believe so. Those were some good stories, but I haven’t seen much of the new material that she may have appeared in…. 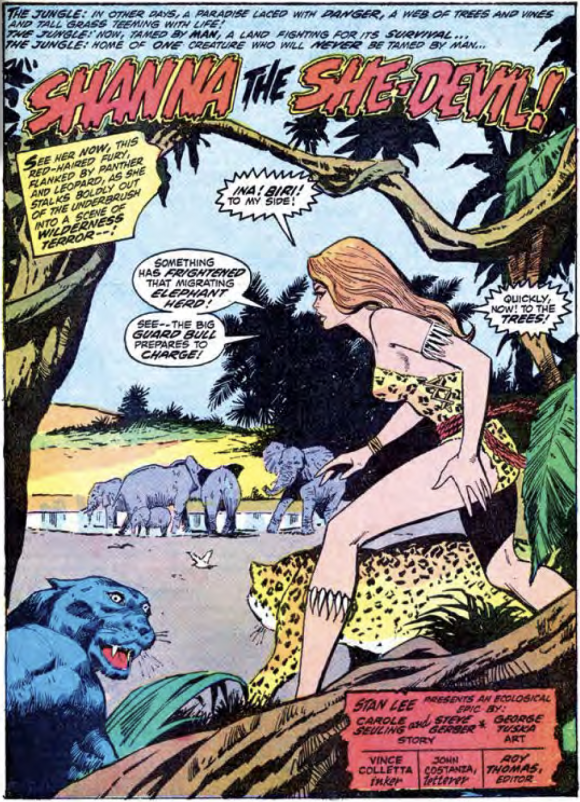 Splash page from Shanna the She-Devil #1. Scan by Barry Pearl.

Seuling: I took the work on Shanna seriously, though. Stan Lee said, “Write for college freshmen,” and that’s what I tried to do. That was the reading level and interest level we were supposed to be aiming at. This was in 1972. So I did exactly that.

Arndt: Did you create the character completely yourself?

Seuling: I did. Steve Gerber, who did some of the dialogue, had no part in the creation of that character. He provided additional dialogue on the first and fourth issues because Marvel thought my dialogue was a little sparse. I thought the pictures should tell a major part of the story.

Arndt: That was the style, back then. Marvel tended to, I think, overwrite dialogue a lot. That was their style at the time, based on Stan Lee’s scripts when he wrote the bulk of the books. It was their company and it certainly was successful for them.

Seuling: I got very angry when I saw Steve Gerber listed as co-creator on a couple of websites. I sent them some angry e-mails.

Arndt: I’m not certain he ever claimed that himself. In the original comics he’s only listed as co-scripter.

Seuling: Before he died, he denied it. But once it’s out there, on numerous websites, it’s awful hard to get it corrected. I wanted to give Shanna a very different background from the earlier character, Sheena, Queen of the Jungle. I can’t even remember what her background story was. 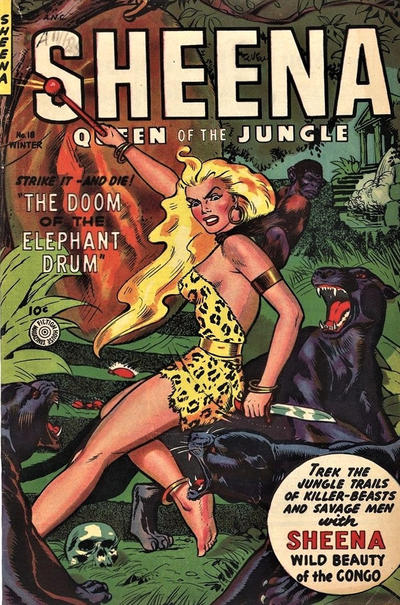 Arndt: There were tons of jungle princesses back in the day in the comics— Nyoka and Jann and Sheena. So many more.

Seuling: Stan wanted a tougher, modernized version of Sheena, one who would be more edgy. That’s why I had her leopards eat somebody in one of the issues. Or kill him, anyways. I got some nasty letters about that. It was the 1970s, for God’s sake! Get over it. [Laughs] Mind you, she wasn’t a jungle queen. She was a biologist and animal behaviorist who went back to Africa with the offspring of a leopard that she’d been caring for at an unnamed zoo. The mother leopard was killed by a sniper who went through the zoo killing all the animals, and only the cubs survived.

Arndt: Where did she get her costume, then? It seems a little odd for a woman who cares for leopards to be wearing a leopard-skin bikini. I don’t believe that I read the first issue when it came out. I know I read #2 and #3.

Seuling: It was explained in the first issue that it was the pelt of the cubs’ mother. She wanted to return the cubs to their natural environment, and I guess she wasn’t going to wear the pelt as a jacket or something! [Laughs] Not in Africa, anyway. Too hot! Of course, Marvel also wanted to sell comics, so the leopard-skin bikini was picked because she wasn’t going to be wearing any onesies either! [Laughs] I think Jim Steranko did the cover for the first issue. Arndt: He did the covers for the first two issues. John Buscema and John Romita did those for issues #3 and #4.

(NOTE: Actually, the two beasts appear to still be hyenas on the cover of Shanna #2, so maybe Steranko refused to do any redrawing and Marvel decided what the hell. — RA.)

I do have some of the original art from Shanna in the form of stats. I started teaching while I was writing the book and I couldn’t go into Manhattan anymore and make the story conferences. I ended up not being able to do both well. So Marvel and I just decided that I wouldn’t do it anymore.

Arndt: You wrote the first four issues, and there was only one more issue after that.

Seuling: I actually wrote the first three, and the fourth issue I plotted. Gerber wrote the dialogue for the fourth issue. I created the Mandrill, though. Gerber created a female villain named Nekra. I don’t think I made up Nekra, but I had the Mandrill. I still have my copies of that. Believe it or not, I save everything. I’m a packrat. I plotted and sent in the outline for Issue #4. They didn’t send me any artwork back on that issue, though, because I was off the book and Gerber was doing the scripting. Shanna the She-Devil #4 (June 1973), from the plot by Carole Seuling. Script by Steve Gerber, pencils by Ross Andru, inks by Vince Colletta. Scan by Barry Pearl.

I created Shanna to be a very intelligent woman. She was an Olympic contender, in gymnastics, I believe. It depresses me, even after all these years, that the most one of those issues goes for is a couple of dollars. [Laughs]

RA: She was a good character, though. She wasn’t stupid. Even when you weren’t writing her, she remained a smart, intelligent woman. She wasn’t a handmaiden-type gal.

Seuling: I put in dialogue from the Minoan Linear B language for one of the issues, and she understood it. That was in #3. I was worried that Marvel was going to make me take it out because it was so obscure, but they left it. I enjoyed putting that into the comic. It was probably the first and probably the last time the Minoan Linear B language was in a comic! [Laughs]

I got my idea for the second issue from the National Geographic, which had an article about people using sailboats with wheels on the sand dunes in the Sahara. I also killed somebody else in one of the issues, but that time it was with elephants. It was in a long shot, though. That guy killed by the elephants was actually based on a person that I really didn’t like, and I let everybody know that that’s who that character was supposed to be. That’s one of the privileges of writers, I guess. [Laughs]