SCUM AND VILLAINY! Dig These 13 Beautiful Bits of BOSSK Bounty

I first saw him in stills, then read about him in the movie novelization.

Then, I finally saw him on the silver screen, big as alien life, in The Empire Strikes Back.

There he stood on the bridge of the Super Star Destroyer Executor, a fearsome bounty hunter, called in for the challenging task by none other than Darth Vader himself.

I knew he could get the job done. Everything about him made that abundantly clear. He was dressed for success, and though he was surrounded by others of his ilk, I knew he’d be the one to grab the prize.

I’ve never forgotten that day, that moment I saw the future of Star Wars, and of my own interests. I followed him faithfully from then on, and my life has been richer for it.

His name is not Boba Fett. 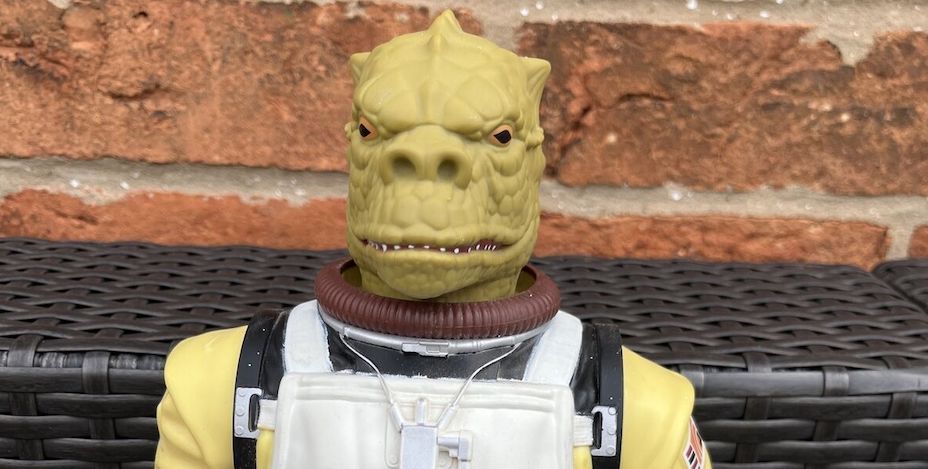 This story is true. All of it. That big lizard guy has loomed large in my Star Wars fandom for over 40 years now, and I’ve gathered a fair share of Bossk bounty in that time. And I’m thrilled to be able to share my 13 favorite bits with you.

One of the things that immediately drew me to Bossk was his look (and yeah, discovering years later his outfit was reclaimed whole cloth from a Dr. Who episode only made his story even cooler), and just like Boba Fett, he was the kind of ancillary Star Wars figure you could imprint with your own ideas of who he was and what he did. We’ve found out a lot about Bossk over the decades through comics and novels and shows, but he’s still a source of fun and imagination for me. He’s the Trandoshan with the Mostest, you see.

Okay, here’s the bounty in no particular order — enjoy!

OG Kenner 1980 Figure. It all begins here, right? He’s a little cartoony, but still so cool. Mighty Mugg. I really loved Mighty Muggs, sort of the precursor to Funko Pops. Bossk was honored in 2008 as a Target exclusive. 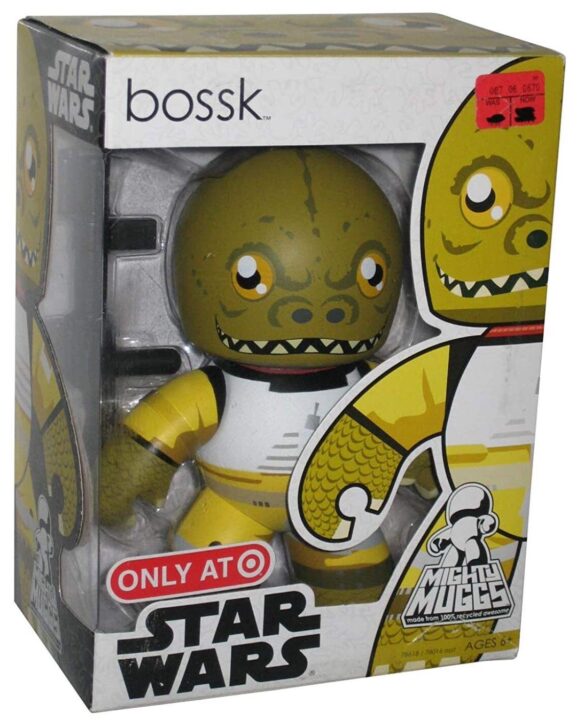 Hot Wheels. I’m a big fan of all the Star Wars Hot Wheels cars they did, and I think Bossk’s 2014 edition is a great mechanical interpretation… even if he did have to share a two-pack with that other guy. 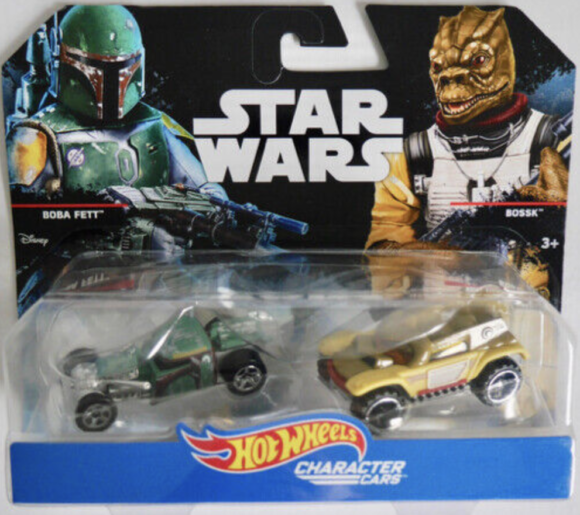 Jakks 18” Figure. Probably one of my most favorite Bossk items. I stumbled upon it back in 2015 in a Toys “R” Us, and later found out he was not an easy one to find in the wild.

Star Wars #33. I’m also a fan of John Tyler Christopher’s “action figure” Marvel variant covers, and his 2018 Bossk edition is no exception to that. 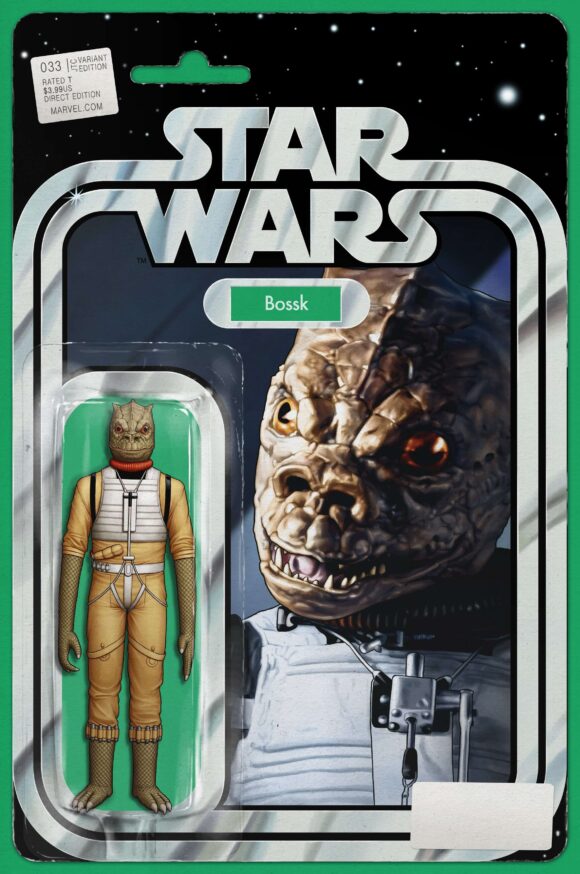 Galoob Mini-Head. Back in 1998, Pizza Hut and Galoob teamed up to produce several Star Wars mini-playsets to be sold as promos in the restaurants. There’s a tiny little figure of Bossk inside. 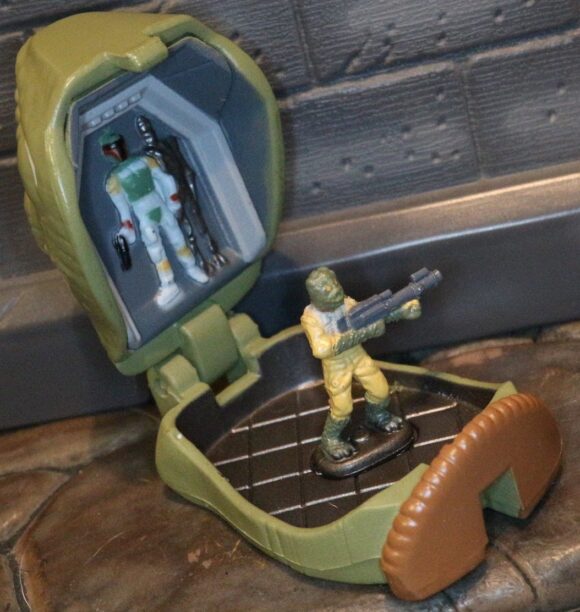 GeekiTiki Mug. Bossk’s mug made its debut at the 2019 San Diego Comic-Con. Funny how so many Bossk collectibles are not mass-market items, or easy to find.

Buffalo Games 500-Piece Puzzle. Yes, yes; Bossk has to share the jigsaw spotlight with all those other crumbums, but he’s there and he’s lookin’ cool standing next to the Sith Lord. Funko Hikari Figure. I’m to understand this is based on the Japanese sofubi figures. Regardless, I love it. Bossk seems to really fit this style of toy. 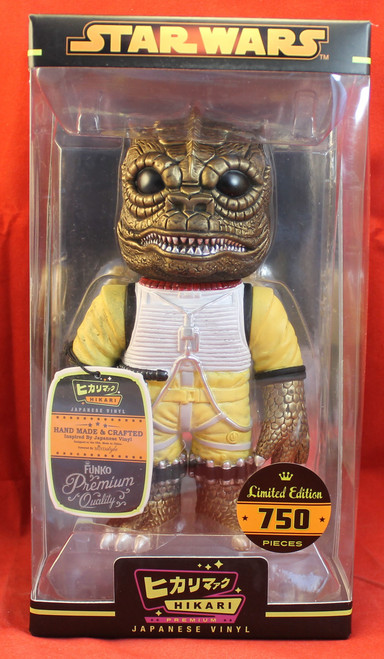 Hallmark Ornament. Hallmark released its Bossk ornament in 2011, and it quickly became one of my big favorites due to its amazing sculpting. I love having the big lizard lug on my tree every Christmas. 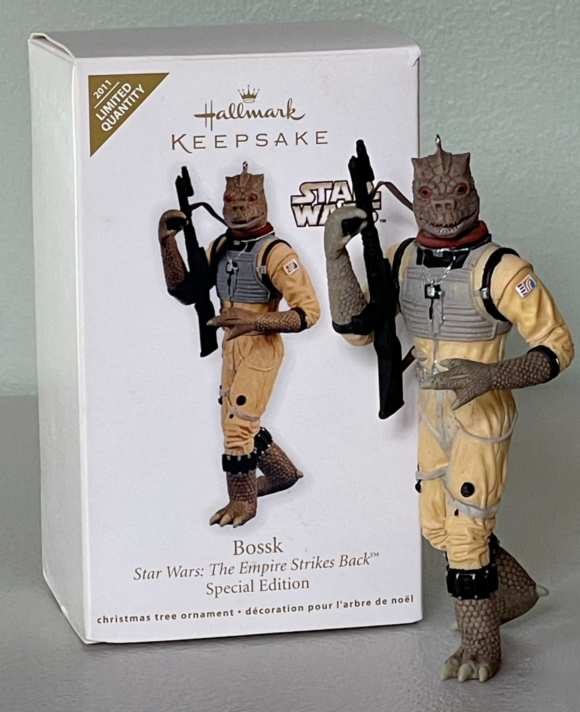 Pez Dispenser. Funko again, this time from 2018. Would you take candy from this guy? 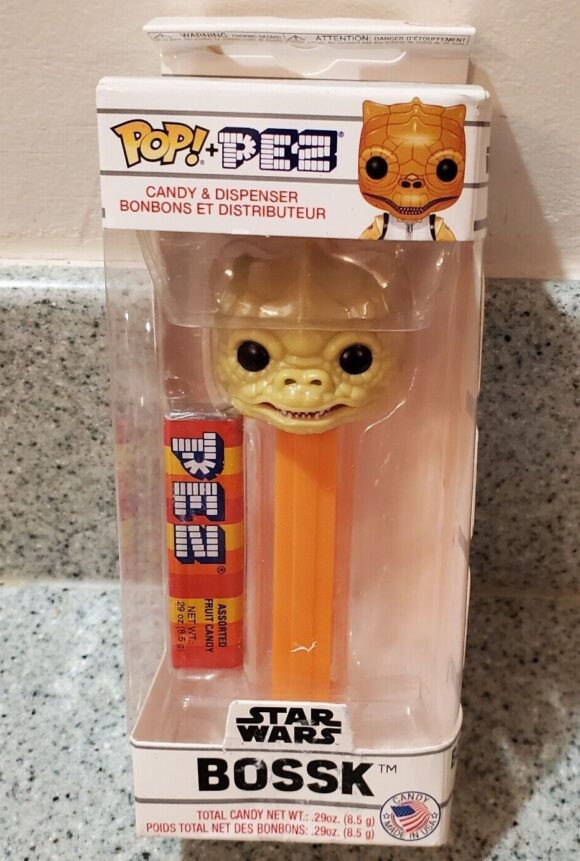 Applause Cake Topper. The company made a lot of different Star Wars cake decorations in the 1990s, but this one, obviously, is the best. Sometimes the best things come in the smallest packages. 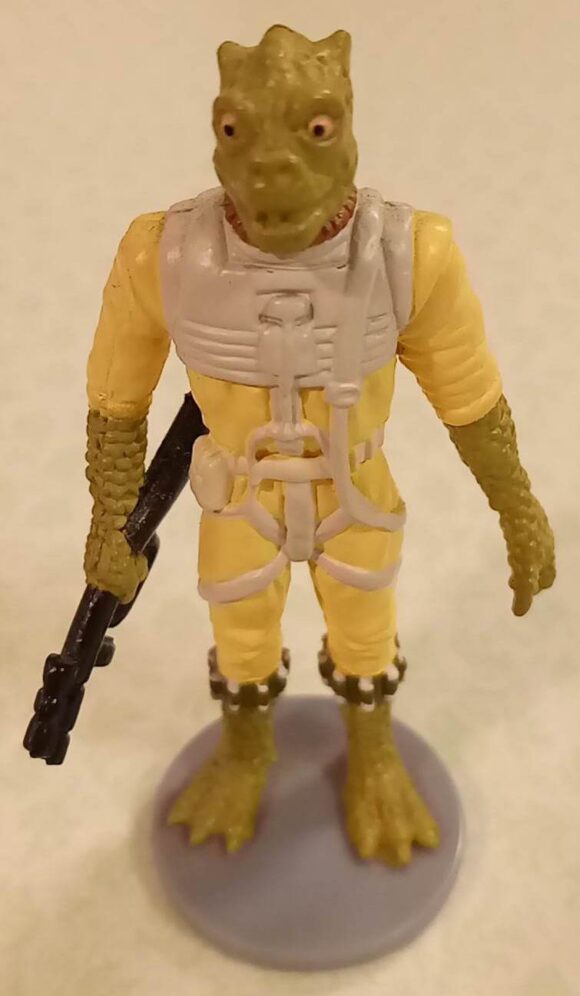 Gentle Giant Mini-Bust. I really dug these mini-busts from the Gentle Giant people, and the pose on the 2005 Bossk edition is to die for. Ahem. 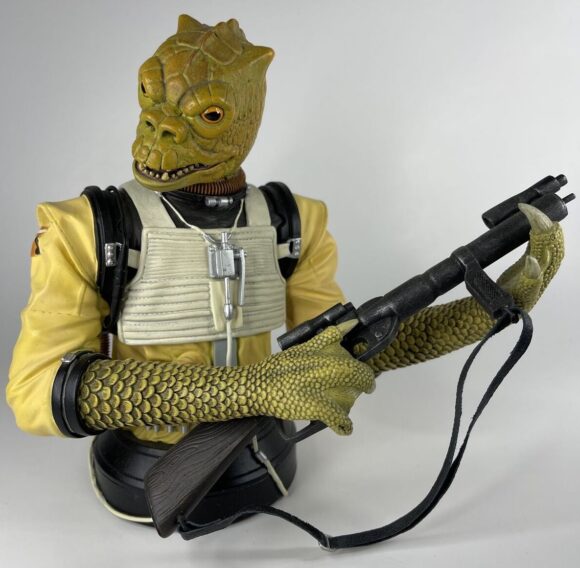