ROGUE ONE: Half A Classic

Now that I’ve had the chance to see Rogue One: A Star Wars Story twice in two days, I feel like I can truly judge the film for what it is. For those of you who haven’t seen it yet, rest assured that this initial part of the review is spoiler free. When you get to the picture of local jerks Dr. Evazan and Walrus Man, don’t go any further, because below that there will be highly detailed spoilers. OK? OK!

Rogue One: A Star Wars Story is a study in duality. The film exists as two distinct parts; the first half is unfocused, confusing, and relatively uninvolving. The second half is laser-focused, assured, and utterly captivating. It simultaneously plays it safe while also being gutsy enough to sidle up alongside one of the great cinematic achievements of all time and beg for comparison. 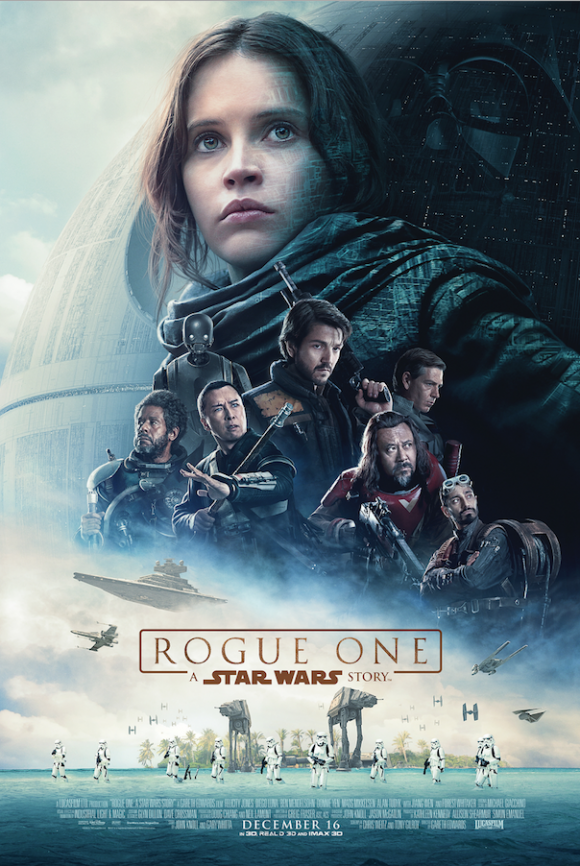 The mission, as everyone knows, is for the team known as Rogue One (led by Jyn Erso, played by Felicity Jones, and Cassian Andor, played by Diego Luna) to steal the plans for the Empire’s new mega-weapon the Death Star and deliver them to the Rebellion. Erso and Andor are assisted by a reprogrammed Imperial droid called K-2SO (voiced by Alan Tudyk), escaped pilot Bodhi Rook (Riz Ahmed), Force True Believer and blind swordsman Chirrut Imwe (Donnie Yen), and his best pal/protector Baze Malbus (Wen Jiang).

All of the actors deliver solid performances, with Tudyk and Yen being particular standouts. Unfortunately, the film takes an extraordinarily long time actually getting them on their mission. Instead, they travel from planet to planet, in search of Jyn’s adopted father Saw Gerrera (Forest Whitaker), who then directs them to Jyn’s real father, and unwilling builder of the Death Star, Galen Erso (Mads Mikkelssen).

For the life of me, I cannot figure out why Whitaker’s character is in this film at all. At the screenplay stage, it should have been recognized that you could lift him from the plot completely and, with just a few tweaks, deliver a streamlined, easier-to-follow adventure. By the time the team finds the elder Erso, the film is almost half over. 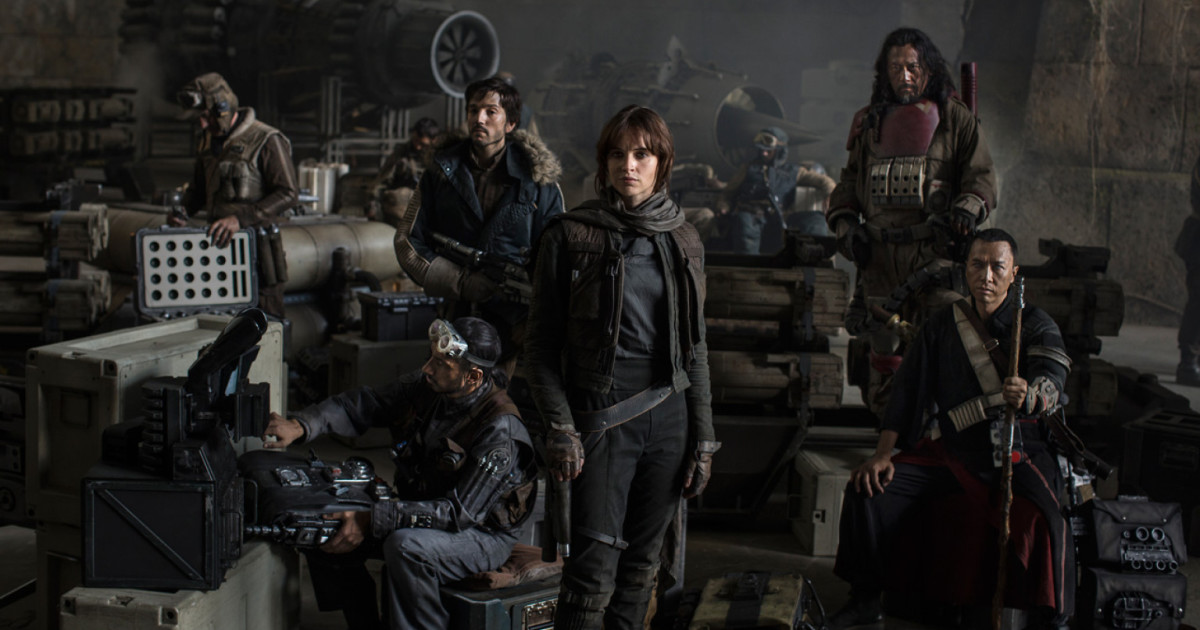 Luckily, it’s that this point that Rogue One really flies into hyperspace. The assault on the Imperial base is put together in a we-know-we’re-doomed, Dirty Dozen-style, with each member of the team responsible for one part of the overall goal. In the middle of all this, the battle expands to encompass the Empire and the Rebellion, and we’re treated to a series of splendid battle scenes, culminating in a full-frontal, direct assault by Darth Vader, one of the character’s finest cinematic moments.

The film then has the guts to bring us right up to the moment where Star Wars so famously began, and it crackles with excitement. It takes real courage to fly this close to the sun. But after we watch Jyn, Cassian, and the rest sacrifice what they do to get us here, it feels earned. By the time we arrive at the final shot, Rogue One: A Star Wars Story delivers on the promise of giving us a fun, exciting story that breathes the same air the classic trilogy did, with some interesting new details that help deepen a story that we all know so well. 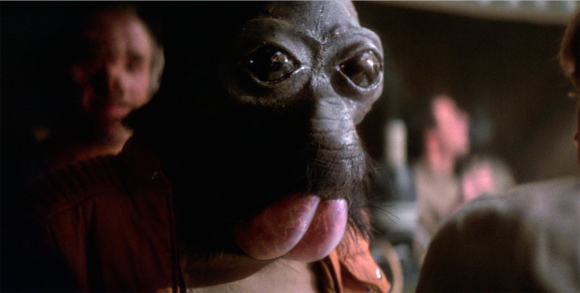 All night, now it’s time to get to the nitty-gritty: Like Luke Skywalker at that cave on Dagobah, use caution before you proceed.

As I referred to above, I think Rogue One takes entirely too long to kick into gear. Felicity Jones as Jyn Erso is a reluctant warrior, and Diego Luna plays Cassian Andor as a bitter, serious fighter. Alan Tudyk earns some laughs as K-2SO, but for the most part our two leads are mopey and closed-off emotionally. Neither actor seems to be having a whole lot of fun, and while I appreciate this film was aiming to be more of a war film than previous installments, there just isn’t a whole lot of zip to the story. We follow the story as it goes from one CGI world to the next, none of them leaving much of an impression (remember how distinct Hoth, Dagobah and Bespin were?).

Ben Mendelsohn as baddie Orson Krennic acquits himself well, presenting a rounded portrait of a truly sick individual (when looking at the destruction the Death Star has wrought, he declares it “beautiful”). Unlike some of the cartooniness we saw on display in The Force Awakens, Krennic seems like a real person, a man with a job to do but lacking any sort of moral center.

The filmmakers make the bold decision to have him interact with someone who isn’t really there—namely, Grand Moff Tarkin, played by the legendary Peter Cushing despite the fact Cushing died decades ago. Computer technology being what it is, they were able to “build” a performance out of another actor (Guy Henry) and recreated footage of Cushing.

I did not know this going in, and when I first saw it I was shocked. My second thought was, “This looks fake,” but even after two viewings I can’t decide if it actually looks fake or if my brain just won’t let me forget that Cushing is no longer with us. After the first screening, I consulted someone who didn’t know about Cushing, to see if anything seemed amiss to them. They didn’t realize the trickery on screen, so I guess the gamble mostly worked.

While I assumed going in that none of our heroes were going to survive the mission –otherwise, where the hell were they during the first three films? — most of their final scenes did pack varying degrees of an emotional wallop. K-2SO’s self-sacrifice turns what could have just been comic relief into something touching, and the final scene on the beach with Jyn and Cassian is definitely upsetting, as they watch utter destruction head their way. I’m old enough to remember the TV movie The Day After, about people trying to survive after a nuclear war, and the similarities were chilling. Getting a scene like this in a major, multi-billion-dollar film franchise produced by Disney takes an act of creative integrity that is worth commending.

Speaking of things to commend, Rogue One gives us a (no pun intended) killer sequence featuring Darth Vader, one fully worthy of the character. As the Rebel fighters flee at the sight of him, Vader proceeds to cut through them like a hot knife through butter. It’s a horror movie scene set inside a sci-fi movie, and, even though I knew the outcome, my pulse quickened in anticipation as the Rebels tried to stave off the Dark Lord of the Sith long enough to get the Death Star plans in the hands of the right person. 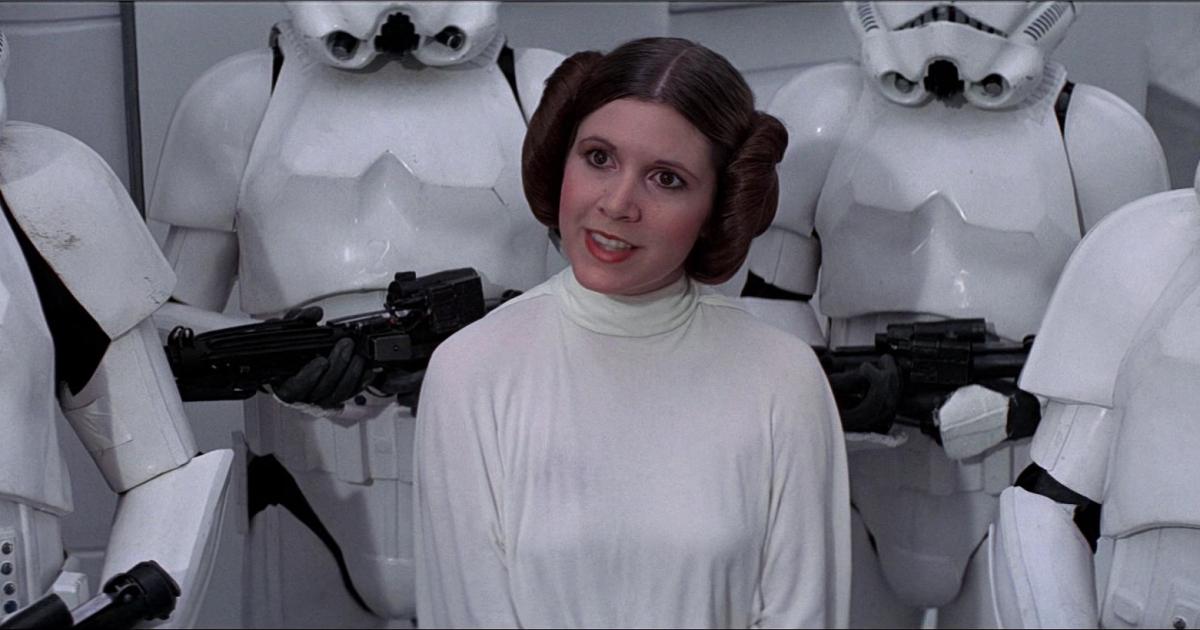 That right person, of course, is Princess Leia, who occupies the film’s final shot. Digitally created so we are seeing Carrie Fisher as she looked in 1977, the technology once again gets us very, very close to being flawless, but not quite all the way there. I’m wondering if there wasn’t a better way to end the film (maybe a silhouette accompanied by a new VO from Fisher would have done the trick?), but I admire director Gareth Edwards’ going for broke, as the film literally stops just moments before Star Wars begins. This is akin to having a new movie take place in Rick’s Café, or telling the story of the guy who gave little Charles Foster Kane his sled: you’re potentially messing with film history, so you need to do it right.

Rogue One is never going to supplant Star Wars in anyone’s mind, but it does add enough context and flavor to the classic story that it’s worth the trip. I love the idea that the Death Star’s main architect designed it on purpose with a fatal flaw, as a form of revenge. We get to see the Rebellion, pre-Luke Skywalker, kicking some serious ass, which gives the group more dignity and agency—turns out they weren’t all just sitting around waiting for some whiny farm boy to come save their bacon. We finally see some female Rebel pilots. We get some fun cameos (as ever, Dr. Evazan is a jerk), some new ships, and lots of new Stormtroopers. 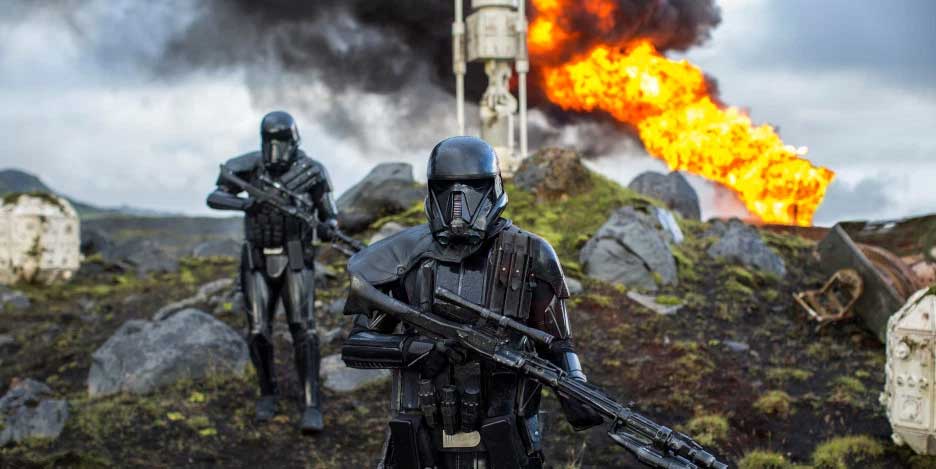 Now that there is more money available for Star Wars movies than George Lucas ever imagined, we’re getting a chance to see the natural evolution of some of his core ideas, and for anyone who worships this world, that’s a lot of fun to behold. Edwards even cribs a few shots right out of Star Wars, some nice Easter eggs for the mega fans (raises hand).

So while I think Rogue One is a flawed film, seriously so, it has moments of greatness worthy of the Star Wars name. I do hope that Disney realizes that we don’t need these standalone movies to stitch themselves to the classic films—I don’t want the Han Solo film, for instance, to end with Alden Ehrenreich walking into the Mos Eisley cantina. Just tell a story in this world, that will be enough.

Disney has labeled this film “an experiment”, so what do you do with experiments? You learn from them and try something different next time. And if they do that, and do it even better, then we’ll all want to make return trips to the galaxy far, far away.

Rob Kelly is a writer/artist/comics and film historian. He is the co-host of The Fire and Water Podcast (and the host of its sister show, The Film and Water Podcast), the co-creator and writer of the award-winning webcomic Ace Kilroy, and the creator of the book Hey Kids, Comics!: True-Life Tales From the Spinner Rack. He’s working a spec script called IG-88 is Enough.

You can his REEL RETRO CINEMA columns here — including one on a little movie called Star Wars.