Rock Out to BE MY BATGIRL!

Home » BATMAN'S HOT-LINE » Rock Out to BE MY BATGIRL!

We even bring you music for BATGIRL WEEK! And an interview with Clashing Plaid‘s Anthony Porter on the greatest song I’ve ever heard!

I am a sucker for songs about superheroes, but they have to be good. So imagine my Batglee earlier this year when I happened upon Clashing Plaid‘s Be My Batgirl. I found it through a video put together by the Batgirl Access Channel on Facebook.

Now, here’s the thing: On my left biceps I have a big tattoo of Social Distortion‘s dancing skeleton. On my right is a big, black bat. In essence, Philly-based Clashing Plaid combines the two and has a rocking number that hit me right in between — a Batarang to my heart.

Haven’t heard it yet? Check out the video here, then check out our MIGHTY Q&A with Clashing Plaid’s Anthony Porter and Paul from the Batgirl Access Channel below!

Dan Greenfield: What’s the Secret Origin of the song?

Anthony Porter: The ‘secret origin’!! Love that!! It’s a “garage-y” song, dedicated to Batgirl, particularly Yvonne Craig! But not so specific that you can’t apply it to any of the Batgirls, or even to the hot rockabllly gal you know.

What was Yvonne Craig’s reaction?

Yvonne’s reaction was fantastic, and a dream come true for us!!! The song, and just as importantly, the video made by Batgirl Access Channel, was featured on her website. She said the song and video were “simply wonderful”.

How were you first introduced to Batman ’66?

I grew up watching the ’66 Batman in reruns, like everybody our age! I love that show.

Anything with Batgirl, but I love the episodes with Green Hornet and Kato, Otto Preminger as Mr. Freeze (Wild!!), I just love watching.

Do you play this as your encore? Opener?

We’ve currently been playing it as the opener. There are some live videos of it on YouTube, and a great acoustic version where the crowd sings along. (Be My Batgirl at Wooley’s).

Are you guys into comics at all or was this kind of an out of left-field thing for you?

I loved comics as a kid, and read a lot of comics during the ’90s, when my brother was working at a comic shop. I love the superhero movies.

I also talked to Paul at the Batgirl Access Channel about his involvement in the video.

“I received a Facebook friend request and message from the band’s lead vocalist, Anthony Porter, requesting that I make a music video using their Batgirl song,” he said. “He told me that he got to know my page through some of my Batgirl music videos that I’ve posted on my YouTube channel. So I took up his request and the video was put together.

“Sometime around October 2013, Anthony did a radio show and mentioned the Batgirl music video on the program, and it made me quite happy. You can listen to the radio talk show on their webpage. Since its quite long and covered a lot of topics, the Batgirl song starts at around the 4:00 mark and the talk starts right after it at around the 7:00 mark — mentioning a bit of Yvonne Craig and the classic Batman show.”

Here’s a second video of the song, and if you want to buy the track — like I did — the info is below!

Clashing Plaid is Anthony Porter (vocals and guitars), Andy Watts (guitars and guitars), Kenny Leso (bass and vocals) and John Vouras (drums). Dalee Thomas is the drummer on the recording of Be My Batgirl that appears on the All In CD.

All In, as well as the Penny Collection CD, are available on iTunes and CD Baby. 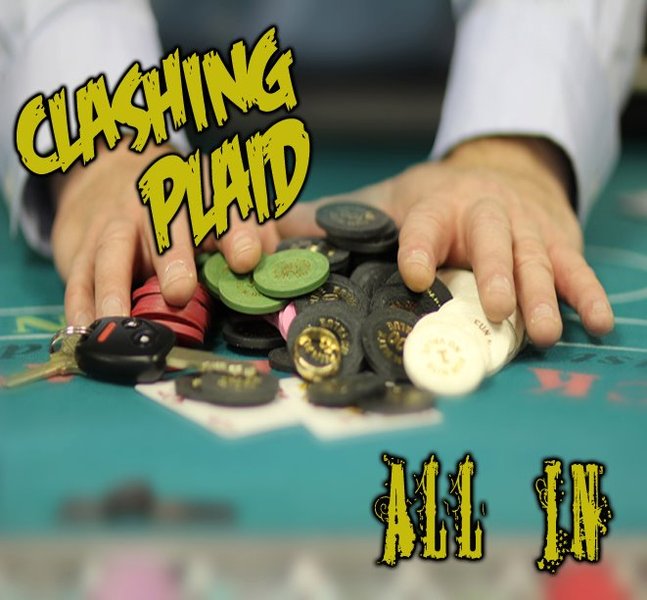