Review: UNCANNY AVENGERS #1 is a Blast

From the ashes of Axis, we have the Uncanny Avengers, a fascinating mix of classic Avengers and X-characters. 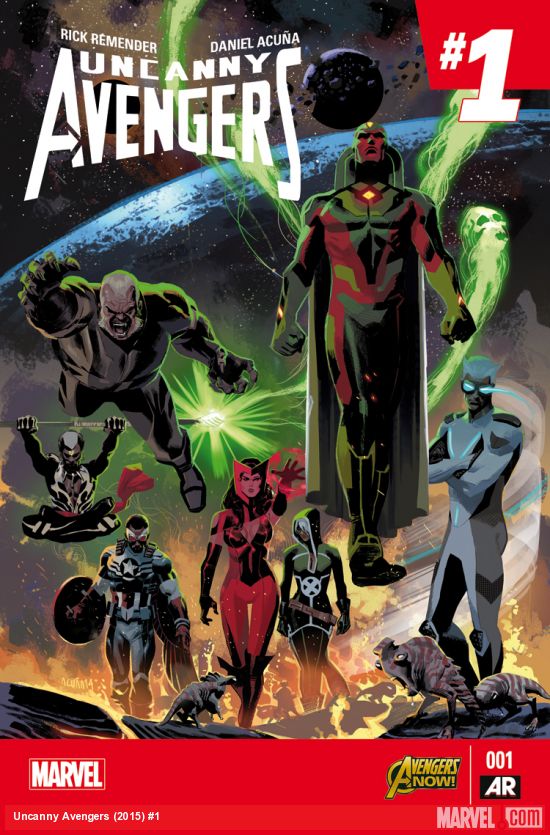 If Axis was a muddled mess, this book is mainstream Remender at his best, telling a big, sweeping, cosmic story, using a team with a nice balance of conflicting personalities and complementary powers. This is the place to go for the next chapter in the stories of upcoming film stars Quicksilver, Scarlet Witch and the Vision. Remender finds a reason for each character to be present and appears to understand each player’s motivations. He continues to write a fascinating Rogue and the additions of Captain America Sam Wilson and Brother Voodoo are a blast. (The inclusion of an inverted Sabretooth is intriguing but sadly, Remender has him talk like a ’90s parody.) The plot is only hinted at as the new team must journey to the High Evolutionary’s Counter Earth with the parentage of Wanda and Pietro seeming to be a key point in the adventure. But the fun that Remender has with the characters is worth the cover price. And Daniel Acuna draws the heck out of the thing, giving a sleek feel to Marvel’s latest Avengers/X-Men team up.