A look at Justin Jordan and Kyle Strahm’s new series, “The Spread,” from Image.

I am a sucker for horror stories, and in particular the post-apocalyptic, sci-fi types, the stories about new worlds rising from the ashes of lost ones.  Books, movies, television, comics, I just eat it up. So when I first heard at last year’s New York Comic Con that Justin Jordan was writing a new original series, “The Spread,” that he was dubbing as a cross between Carpenter’s The Thing and Kazuo Kolke’s “Lone Wolf and Cub,” I was excited, giddy even, one of the series that I have been eagerly waiting to hit the stands.  After reading the first issue, I can only say that I am looking forward to many more. 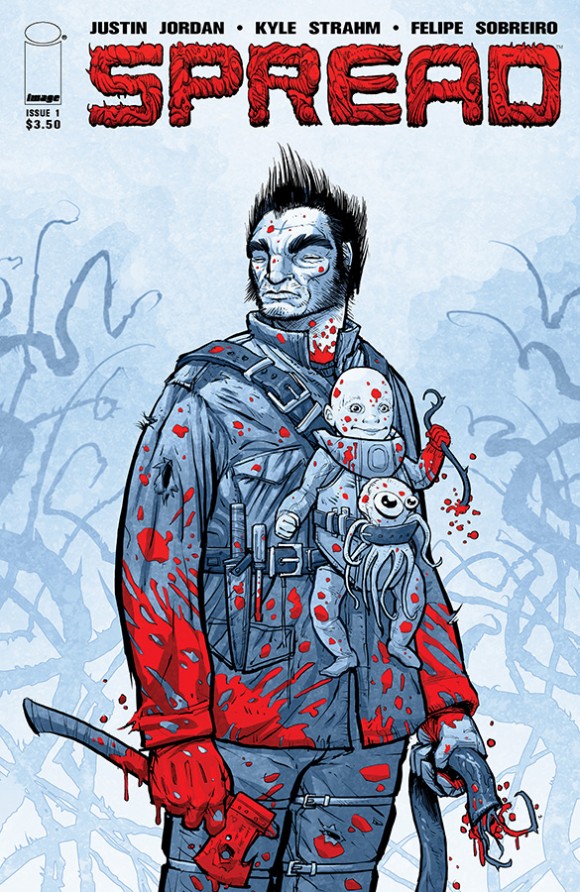 If you don’t know Justin Jordan, he is the writer behind the excellent six-part series, “The Strange Talent of Luther Strode,” and its follow-up, “The Legend of Luther Strode,” which has been one of my favorite series over the past few years. Strode was an incredibly gory epic about a teenager who becomes imbued with extreme strength after taking a campy, at-home body-building course found in the back of a magazine, but at a cost, as he begins to see the human body as a piece of meat, carnal and disposable, until becoming a sort of well-intentioned Michael Myers (fun fact:  Michael Myers’ sister was named Laurie Strode). But what I think was lost on so many readers, or more likely potential readers who were scared off by the persistent red of the series, was that among the scenes of serious carnage, Jordan managed to tell what was a very tender story about a boy who had lost a lot and lost even more, and to seemingly effortlessly grow the principle characters, despite near-constant action.

“The Spread” is a return to these horror/sci-fi roots; it stylistically has a very similar feel to Strode – the art is striking, the colors are bold, and Jordan’s right is persistently engaging – but the series is much more ambitious and tells a much bigger and more complex story, offering a broader view of a fully-conceived world rather than merely reinterpreting the existing one through the eyes of a teenager. The story opens in a snowy wasteland, some corner of the Earth that was quarantined off after it became besieged by a creature known as the Spread, a hive-mind monster that is a visceral mess of teeth and horns and tentacles that has spread like a virus across the landscape, occupying the land that it has laid waste to. The Spread is vicious and violent, capable of taking down passing planes or infecting the bodies of humans, turning them into lumbering zombie-like creatures.  While the book leaves ambiguity as to the Spread’s origins, it is hinted that it came from beneath the earth, an ancient creature that had lain dormant until someone dug too far, too deep, and it awoke.

The world created is a desolate one – there are no sign of established infrastructure or society, save for a band of bandits and passing reference to other individuals whom may have a more empathetic view on the reconstruction of society.  The pivots of the series are a man named No – a self-reliant figure with benevolent intentions – and a baby, the sole survivor of a mysterious airplane crash, mysterious not so much for the cause of the crash – the Spread plucked the plane from the sky – but from its mere existence, as a plane had not been seen in the quarantined areas for years.  The story is narrated by the baby, Hope, looking back on her early life with No, and maybe that is where so much of the opening issue’s strength comes from – it is a character driven story with a minimal cast, with the promise of a focus on the principal protagonist and their interaction with the world around them, without the inevitable loss of identity that comes from a large ensemble cast.  In the end, though the world is bleak, Hope’s narration highlights that the story is more about recreation than it is the apocalypse itself, looking at happens after the world collapses, about human reaction and the areas that we occupy, how society is reestablished, and what that even means.

Of course, maybe one of Jordan’s most impressive talents is his innate knack for finding impeccably talented co-creators with styles that not only match his vision and tenor for a series, but who are capable of carrying the story and building its characters subtly, through Jordan’s often sparse words. In Luther Strode, Jordan relied on Tradd Moore’s wild yet tight pencils to form brutally visceral and detailed images, while in “Dead Body Road,” Jordan paired with Matteo Scalera, whose rough painted style complemented the gritty crime drama perfectly. Here, Kyle Strahm takes on penciling duties (with Strode alum Felipe Sobreiro returning on color duty), and he offers a style that manages to embrace both the feeling of isolation in this devastated world, while highlighting its primeval horror. The close commune and trust between the artist and writer is immediately apparent, as Jordan’s script is tight and succinct, leaving Strahm’s art to fill in the gaps, which he does exquisitely across broad panels and splash pages, giving heavy credence to the older aphorism, “show, don’t tell.”

If it isn’t apparent, I enjoyed the opening issue . It may not be for everyone — as always, Jordan’s work is bloody — but for fans of horror or sci-fi or anyone who loves a good post-apocalyptic tale, “The Spread” should be an addition to the monthly pull list.