It’s a cosmically enhanced blast! So says our Marc Buxton! 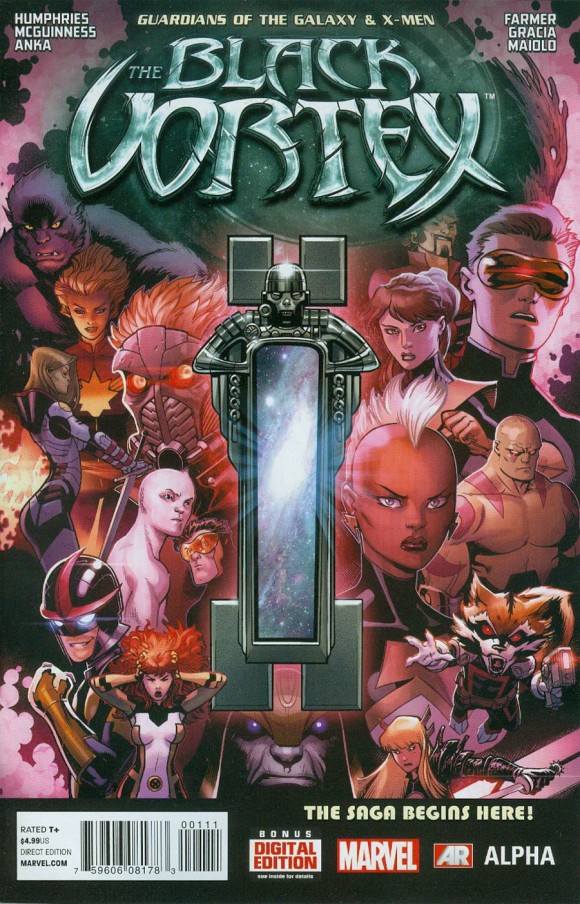 It was just over six months ago when theater-goers became hooked on a feeling and now Marvel presents the very first crossover featuring the Guardians of the Galaxy. In this mash-up, everyone’s favorite group of space misfits must team up with the All-New X-Men to retrieve the Black Vortex, a cosmically empowered mirror that grants whoever looks in it enhanced powers. No new ground is broken here plot-wise, it’s pretty much a standard space MacGuffin hunt, but writer Sam Humphries has a blast with his extended cast and so will fans of either team. It’s basically Peter Quill’s evil father finds the mirror, Star-Lord and Kitty Pryde (and it’s always a delight to see them together) steal the mirror, and the X-Men and remaining Guardians arrive to help protect the mirror. It’s a plot that could have been pedestrian but it bursts with life and energy. After such gloomy crossovers like Axis being the Marvel standard of late, it was refreshing to read one that is actually breezy and fun but still has consequences. The Black Vortex should make for a good story engine and the creative cast — a large group that also includes artist Ed McGuinness — has a chance to play with their characters’ power levels. This first part of Black Vortex matches the tonality of the film while telling a story only a comic can tell. I look forward to more.