A look into the eyes of the latest villain to get the Batman: The Animated Series action-figure treatment.

I know that seems like a small thing to get hung up over but it goes to the artist’s intent. Neal Adams created Ra’s al Ghul’s look and made a conscious choice not to give him eyebrows. 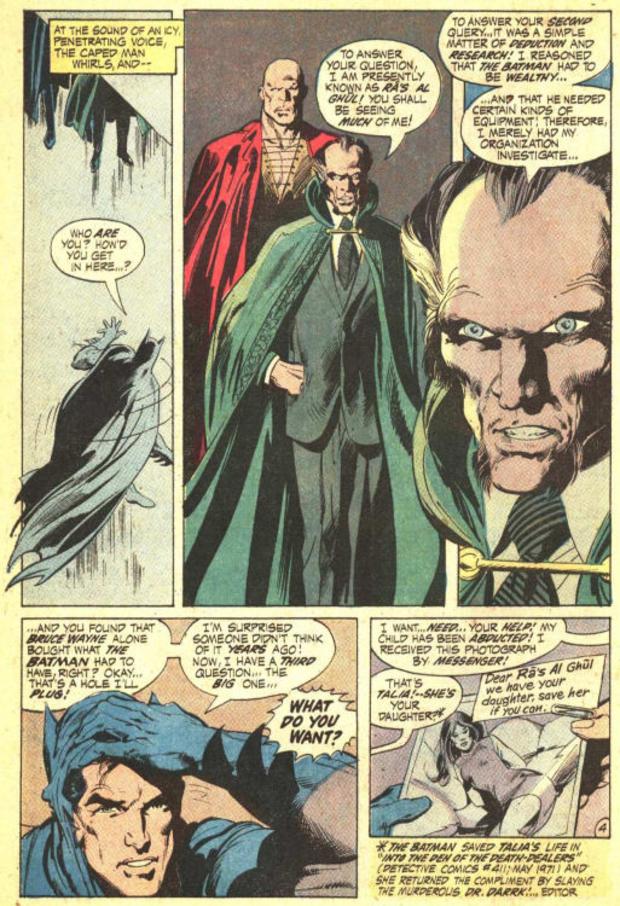 But in the intervening decades, artists have misunderstood the shadowing around Ra’s pronounced brow and now it’s all too common to see the Demon’s Head portrayed with these big, bushy eyebrows — which only take away from part of what made him so interesting in the first place.

So when I saw DC Collectibles’ new Ra’s al Ghul figure, I went right to his forehead, and… 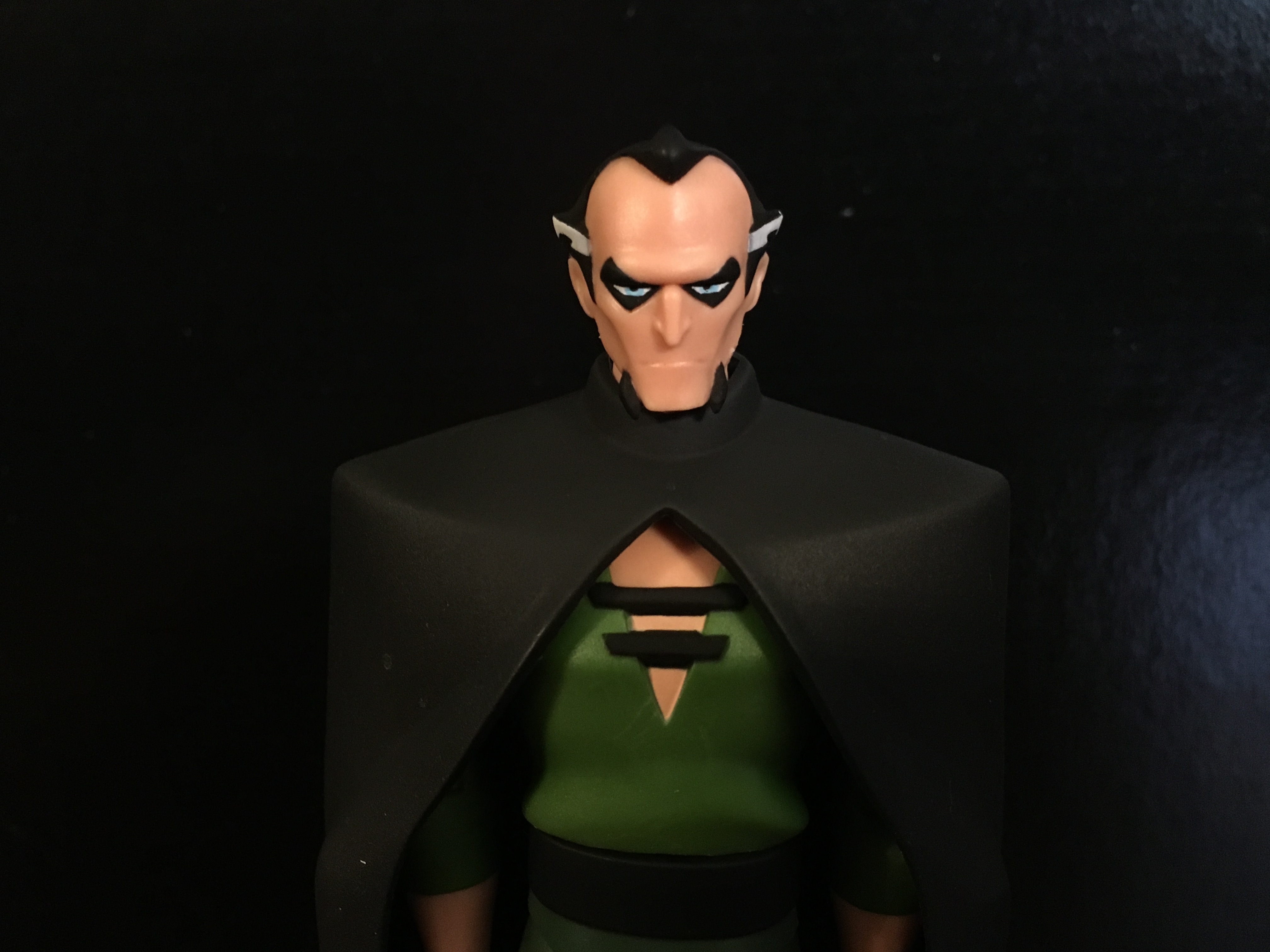 We have a winner!

It’s close, but I’d vote that the black that flares up and away from the brow is supposed to be dramatic shadowing.

Now of course the toy designers were following the character model from Bruce Timm’s Batman: The Animated Series, but it could have been lost in translation. It wasn’t — and so DC Collectibles has gotten it right.

Beyond his face, though, this is a winning figure and one of the best of the entire line. Ra’s stands tall and broad in his laced top and flowing cape. 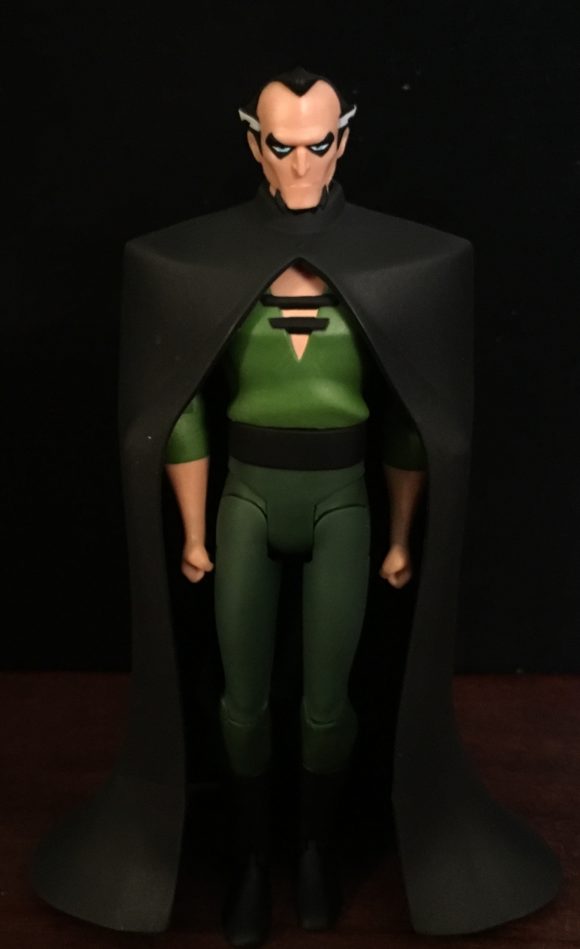 He comes with his jackal helmet — from the episode “The Demon’s Quest,” based on the classic, original Ra’s saga by Denny O’Neil and Adams — and the requisite change of hands. (The helmet is actually an interchangeable head, so it “fits” perfectly.) 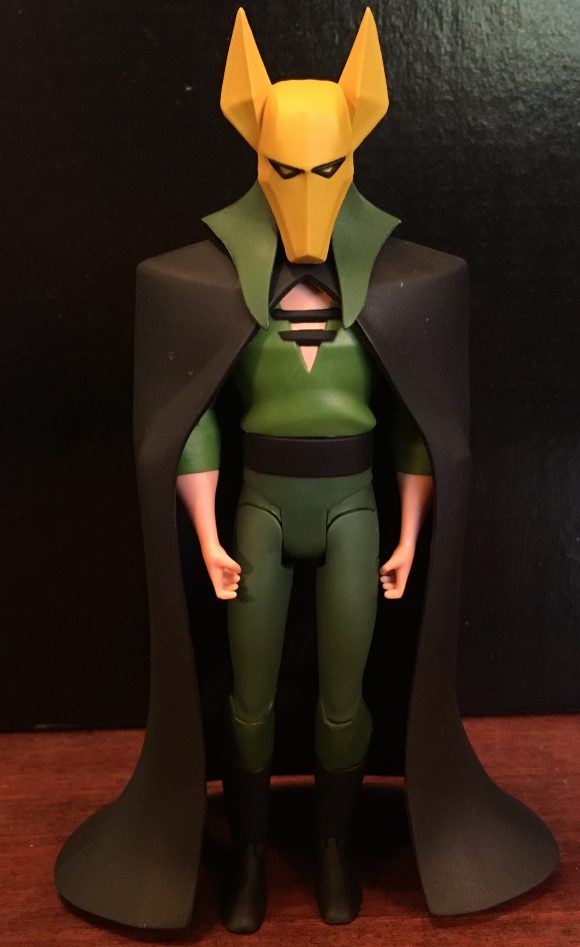 You can also remove his cloak. 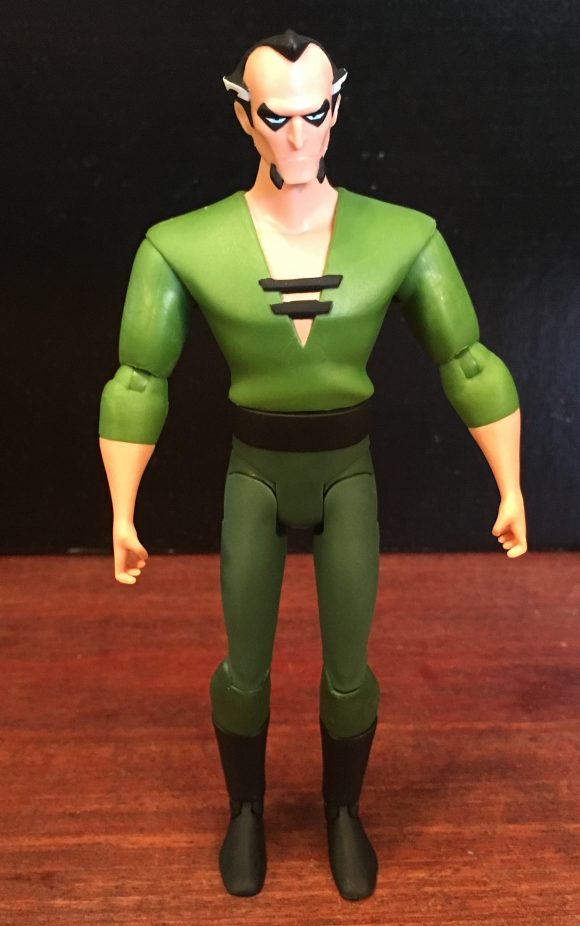 I do wish he came with a sword. Even better would be if you could also take off his shirt for Desert Sword-Fighting Action. 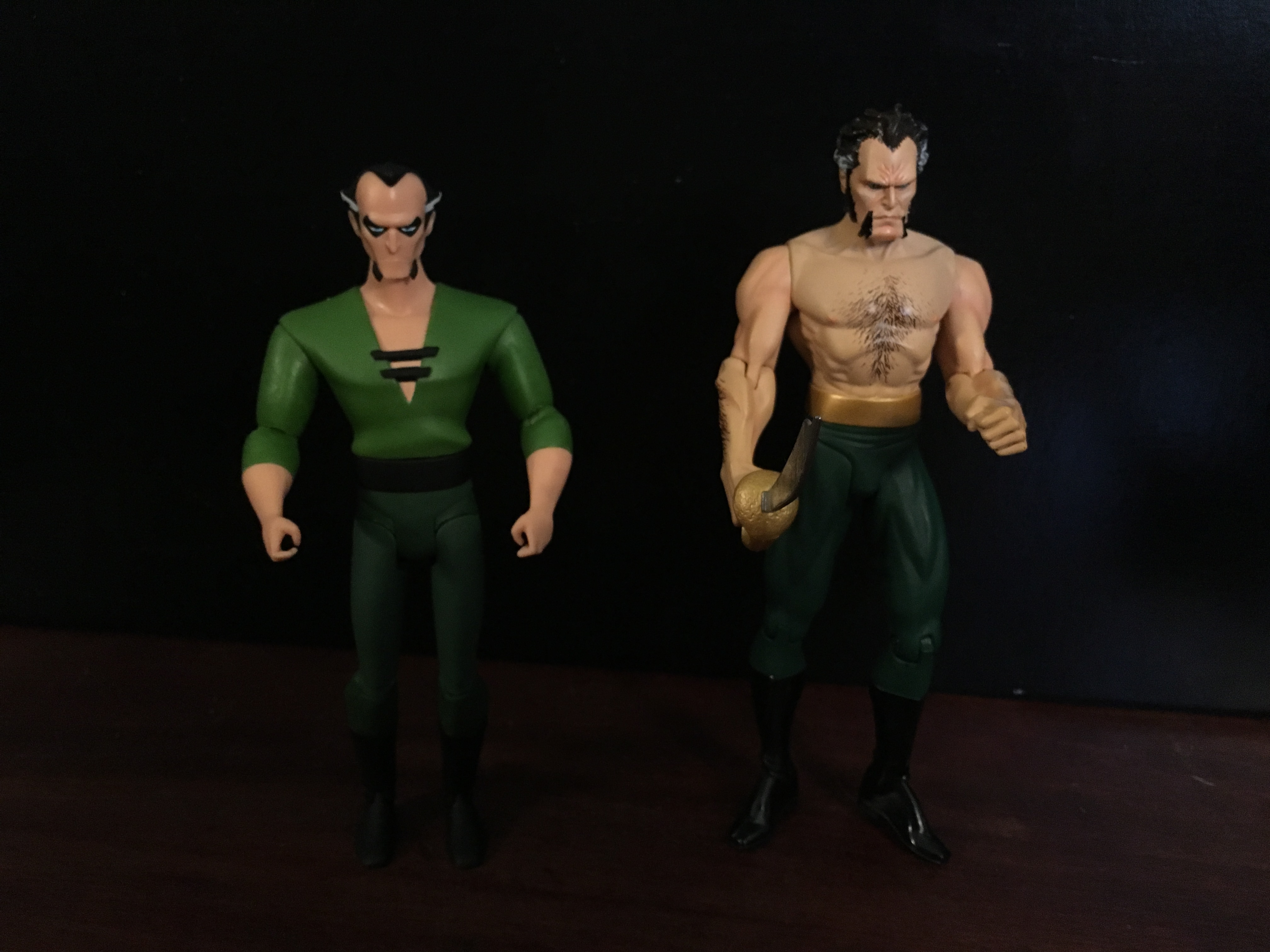 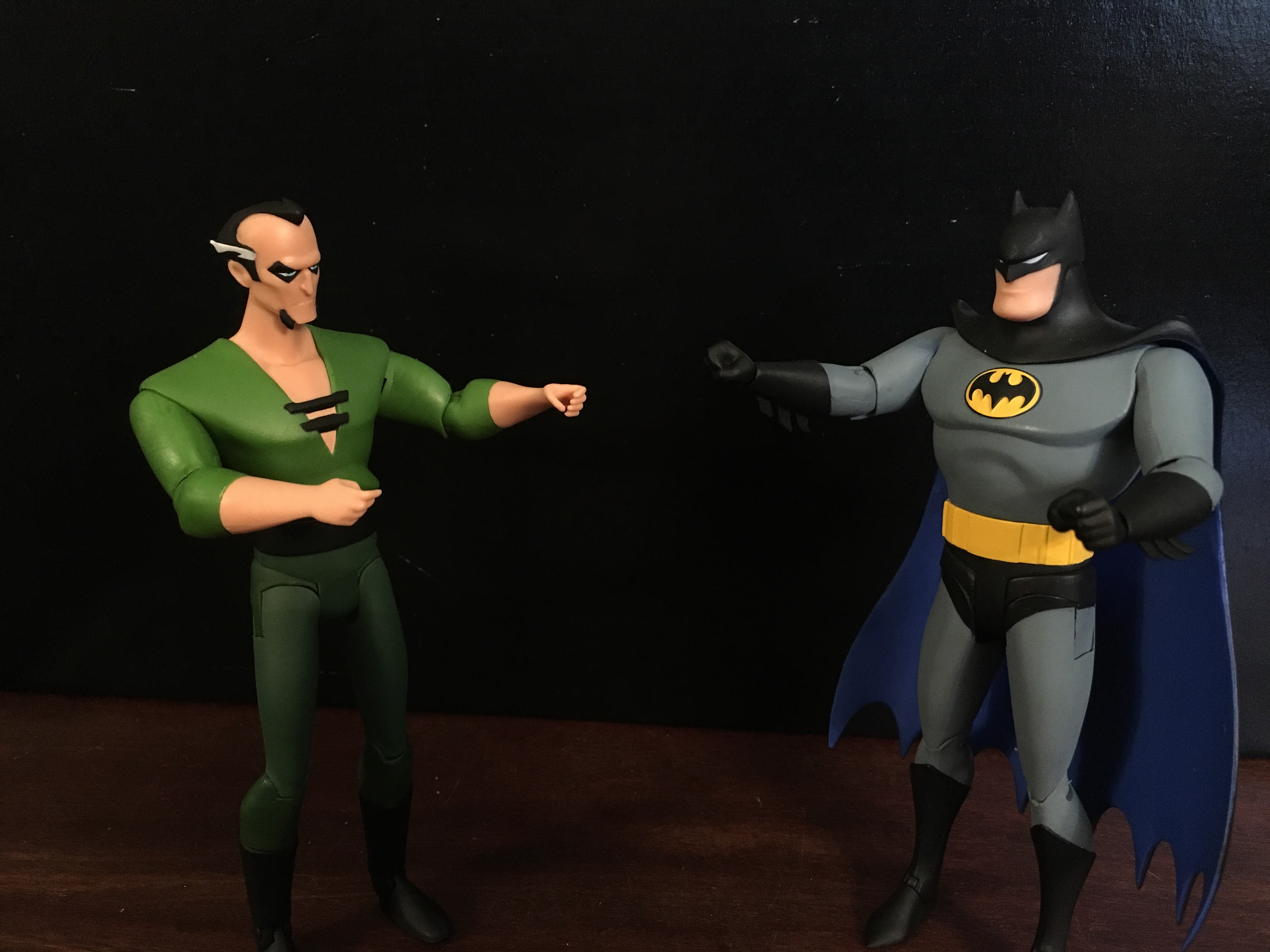 Ra’s will cost you about $25 (list price, so shop around) and comes in a wave with Commissioner Gordon and Zatanna. All three are on sale now.