REVIEW: Motorcycle Catwoman is as Good as it Gets

Home » ACTION FIGURES & MERCH » REVIEW: Motorcycle Catwoman is as Good as it Gets

Last year, I pledged my devotion to Chainsaw Wonder Woman. This year, it’s Motorcycle Catwoman, which is one of the best and biggest-ticket items of the season. It’s also an official HOLIDAY HOT PICK!

Mere words cannot express just how great she is. When I first glimpsed her last winter, I declared her the winner of Toy Fair. Now that’s she’s zoomed onto my shelf, thanks to DC Collectibles, I feel a song coming on: 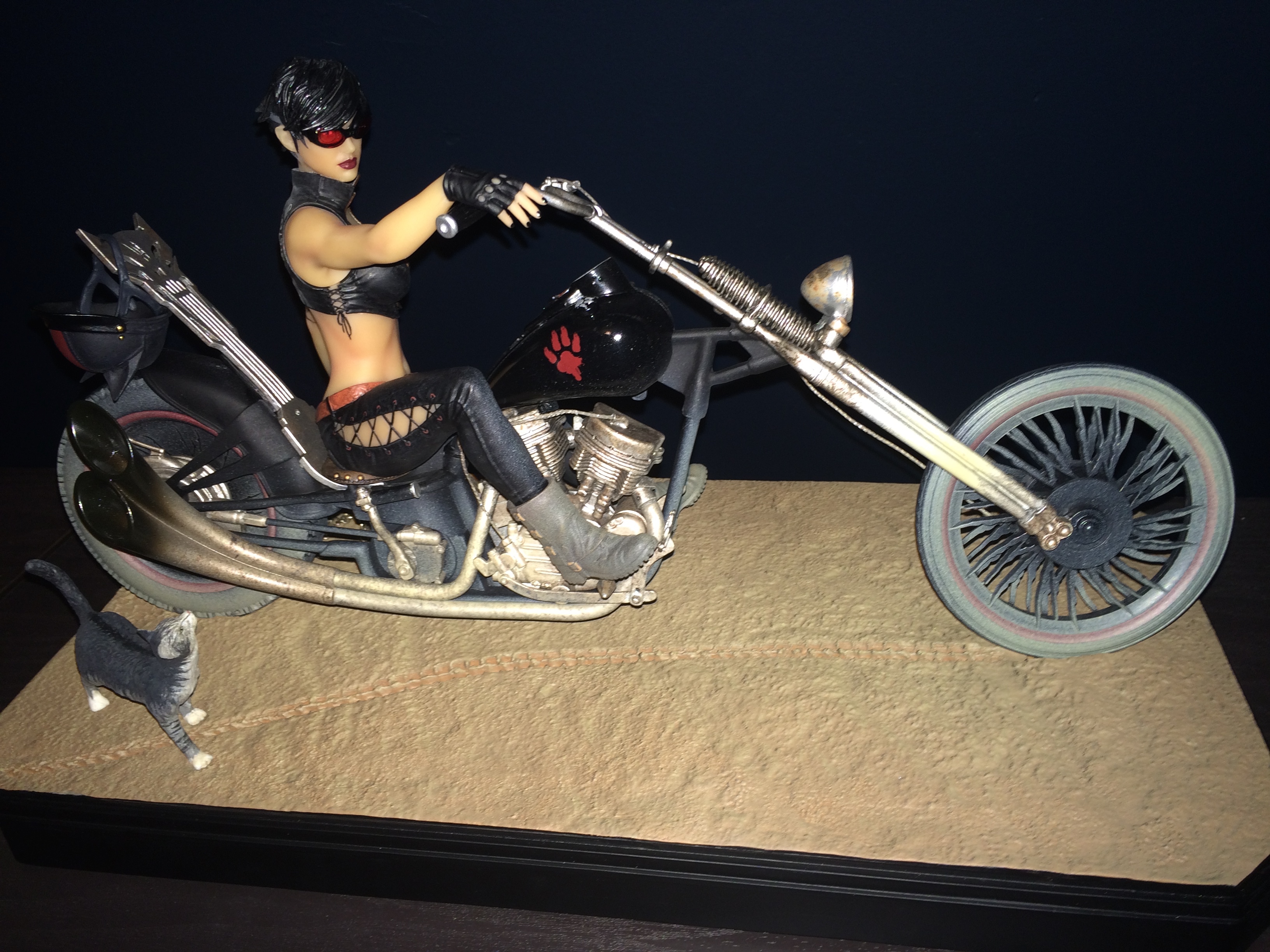 In the day we sweat it out on the streets of a runaway Gotham dream
At night we ride past the Wayne Mansion in suicide machines
Sprung from cages like Arkham Asylum,
Chrome wheeled, fuel injected,and steppin’ out over the line

Selina, this town rips the bones from your back
It’s a death trap, it’s a suicide rap
We gotta get out while we’re young
`Cause tramps like us, baby we were born to runnnnnnnn

I don’t even like Springsteen — Motorcycle Catwoman, look what you’ve done to me! 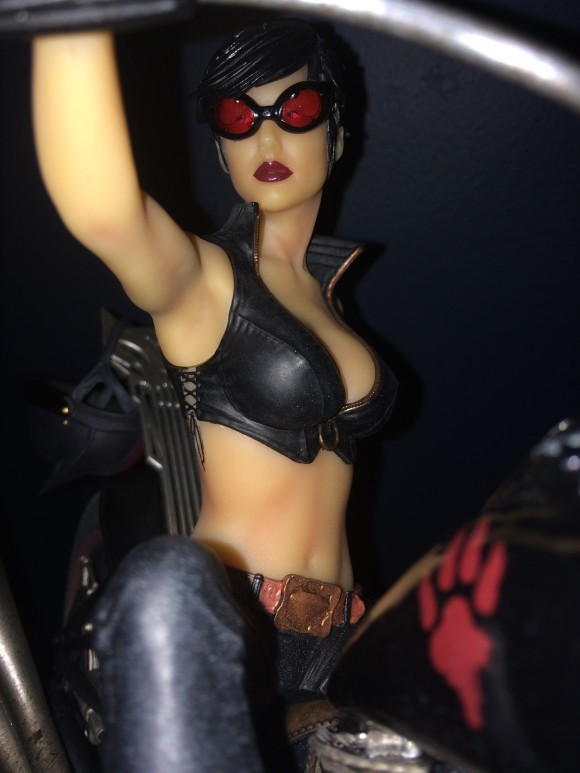 Dustin Nguyen designed this dazzling statue, which reimagines Selina Kyle as something out of a Social Distortion-fueled fever dream: Officially she’s called Gotham City Garage Catwoman, the first in what’s planned to be a series of Bat-bombshells on badass vehicles. To me, she will forever be Motorcycle Catwoman. She’s about $350 and worth every shiny, pilfered penny. 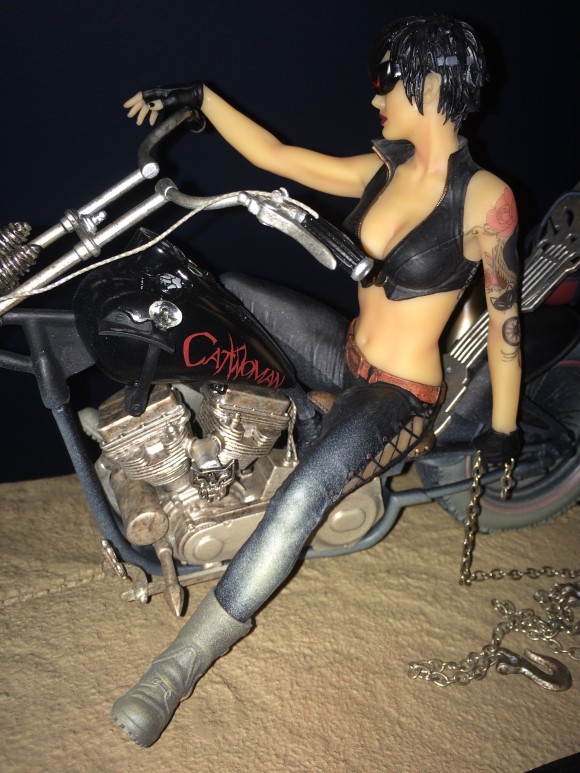 The statue boasts gorgeous craftsmanship and design: Check out the detail on the engine, her outfit and biker boots. There’s a pet tabby, cat ornamentation on the back and a cat-eared helmet because of course. She doesn’t even sport her traditional whip: No, Selina — Miss Kyle, if you’re nasty — has traded it in for chains. Her sculpt? By Gentle Giant. Her tat? By Adam B. Forman of L.A. Ink.

I ask, “Whose motorcycle is this?” And she responds, “It’s not a motorcycle. It’s a chopper, baby.” 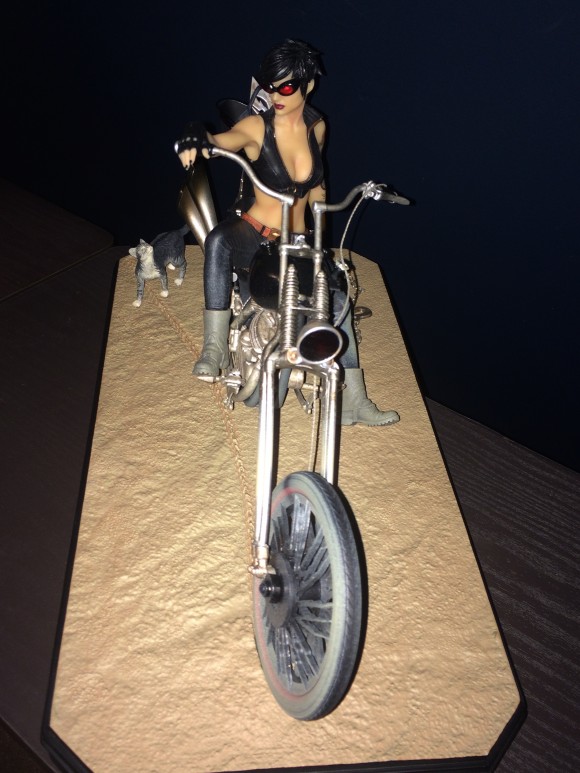 Take me with you Selina, on a dusty road out West! Let’s leave this ugly city behind!

‘Cause tramps like us, baby we were born to runnnnnnnn 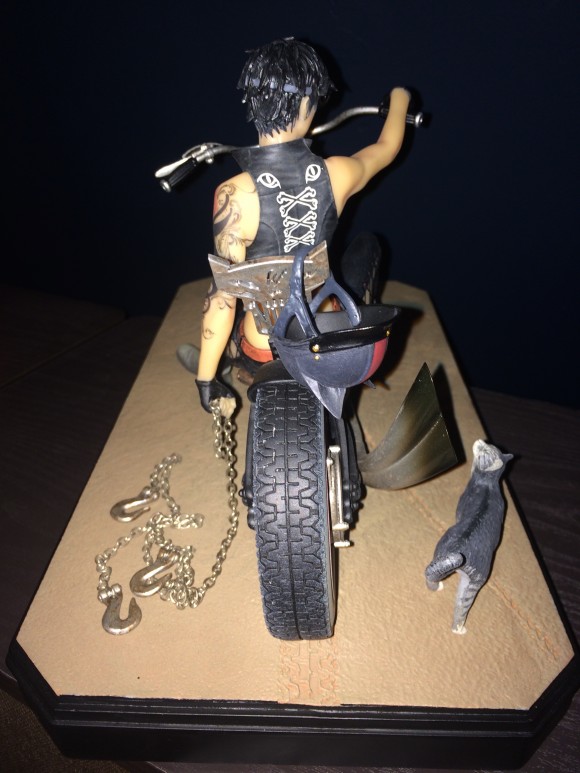