We don’t run a lot of single-issue reviews but every once in awhile there’s a book that deserves a look, for good or bad. In this case, it’s Justice League 3000 #1, which is, for all intents and purposes, supposed to replace the decades-running Legion of Super-Heroes as DC’s super-team of the future. Teacher-by-day/blogger-by-night Marc Buxton gives out the grade … 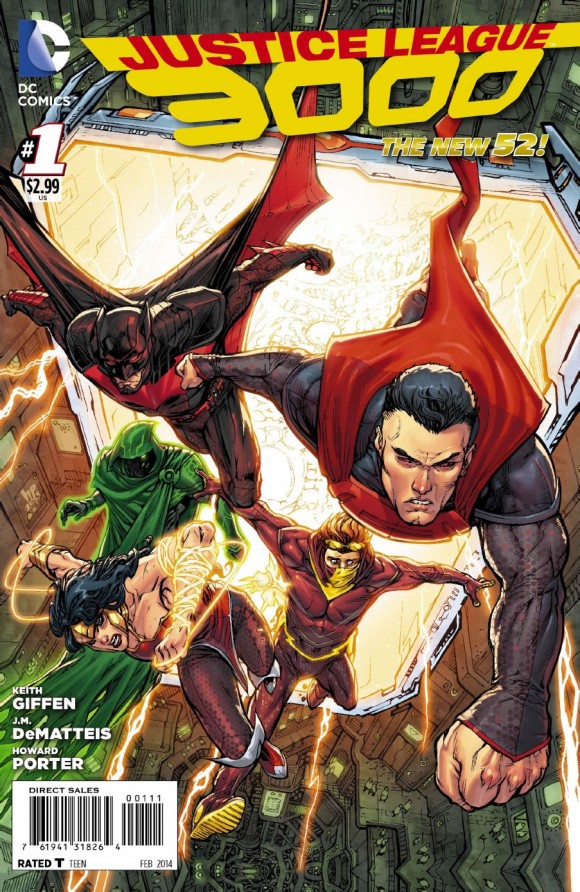 Standing on its own, this book is a worthy experiment, an exercise in world-building a future for the new DC Universe. It seems, in the confusing, throw-it-against-a-wall-and-see-what-sticks methodology of the New 52, that the Legion of Super-Heroes now exist in some sort of alternate universe or something, so the future DC Universe has yet to be built. Justice League 3000 is the first brick of that future.

But it’s a problematic brick, with a misty, unclear dystopian future with some kind of alien threat that humanity needs to deal with. It all isn’t very clear, and everything may come into focus in a future issue, but this isn’t a review of a future issue, it’s a review of the first issue, an issue that is confusing and amorphous in detail. Writers Keith Giffen and J.M. DeMatteis — who produced the legendary, vaudevillian Justice League International of the 1980s — usually make the proceedings more fun, but the whole issue felt like playing catch-up. I couldn’t tell you who the new League was fighting, and it wasn’t a whole lot of fun watching them do it.

The book cannot stand on its own in the face of the legacy of the Legion. Perhaps fans should let it, but this book is meant to scratch an itch that the Legion used to salve. The Legion was full of hope, and DC gets credit for shaking things up from that utopian vision, but this future world seems snarky and mean.

It seems the Justice League 3000 was built by twins working for the Cadmus Project, I think, named Terry and Teri. Terri and Terry are sarcastically known as the Wonder Twins, something I enjoyed immensely (see, there’s that sense of fun), and they design the League to take down some sort of alien threat. It is not clear if the League are clones, robots, transformed humans, or what, but they seem to know each other and they, mostly, seem to hate each other.

Maybe it’s just me, but I kind of wanted to see a future Justice League, not a future parody of the Justice League. Superman is a swarmy jerk, Batman an arrogant control freak, Wonder Woman an aggressive, shrill ‘roided up Amazon, the Flash a burnt-out speed addict, and Green Lantern a disgraced symbol. Heroes with imperfections are always welcome, heroes with no relatable personalities or likeable aspects are not.

The Howard Porter art is very well designed, bold and futuristic looking. The book will stand out as an art success, but the whole thing seemed like it tried too hard to be modern, with heroes who do not get along, who question their own purpose. It appears to hold a hard-to-justify contempt for super-hero archetypes and symbolism.

With Giffen and DeMatteis having the cachet that should earn the trust of any fan, Justice League 3000 should be a fine addition to the New 52. Yet, it would be nice if the Legion were replaced with something a bit less overwrought and a lot more hopeful — and if the future DCU were a little brighter.