Instead of the BATBOOK OF THE WEEK, I’m picking the BATSWAG OF THE WEEK…

I’m accustomed to waiting for Two-Face figures, I suppose. I always wanted a Mego Two-Face as a kid, though it wasn’t until Toy Biz gave it a shot with its cheap, smaller-scale figure released as part of the Batman ’89 merchandising extravaganza that I got my hands on any Harvey Dent swag. 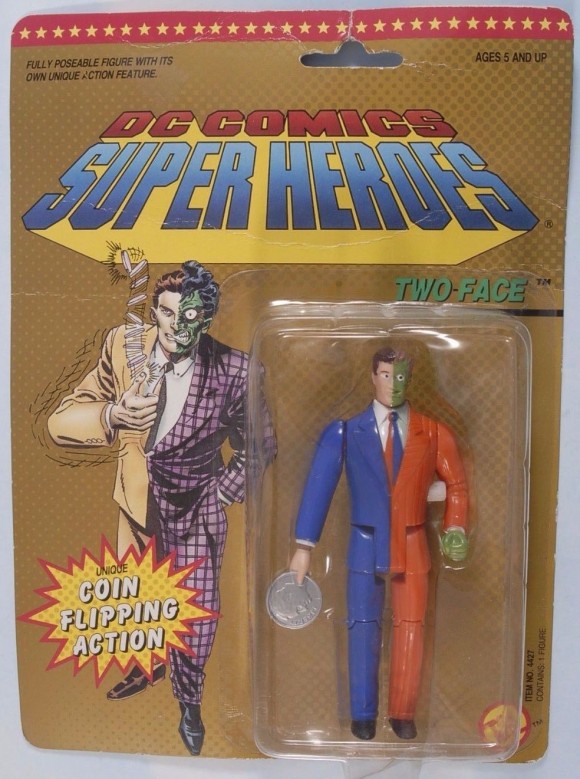 Somebody’s trying to unload this on eBay.

So I suppose it was only fitting that the Greg Capullo Designer Series Two-Face figure from DC Collectibles would be delayed by a year or so, hitting shelves way after it was first solicited.

The whereabouts of the figure was something of a minor obsession of mine. I’m hardly a completist anymore but the Capullo 7-inch-scale line is my favorite from DCC and I wanted, as they, to “collect ’em all,” even if Two-Face has barely been seen in the Capullo-Scott Snyder run on Batman. The delay was evidently related to the problems with the plastic DCC was using and I actually gave up on it ever coming out — especially when it seemed like the company was moving on and soliciting non-Batman characters in the series.

Finally, it started hitting shelves last week, at the standard SRP of $24.95. 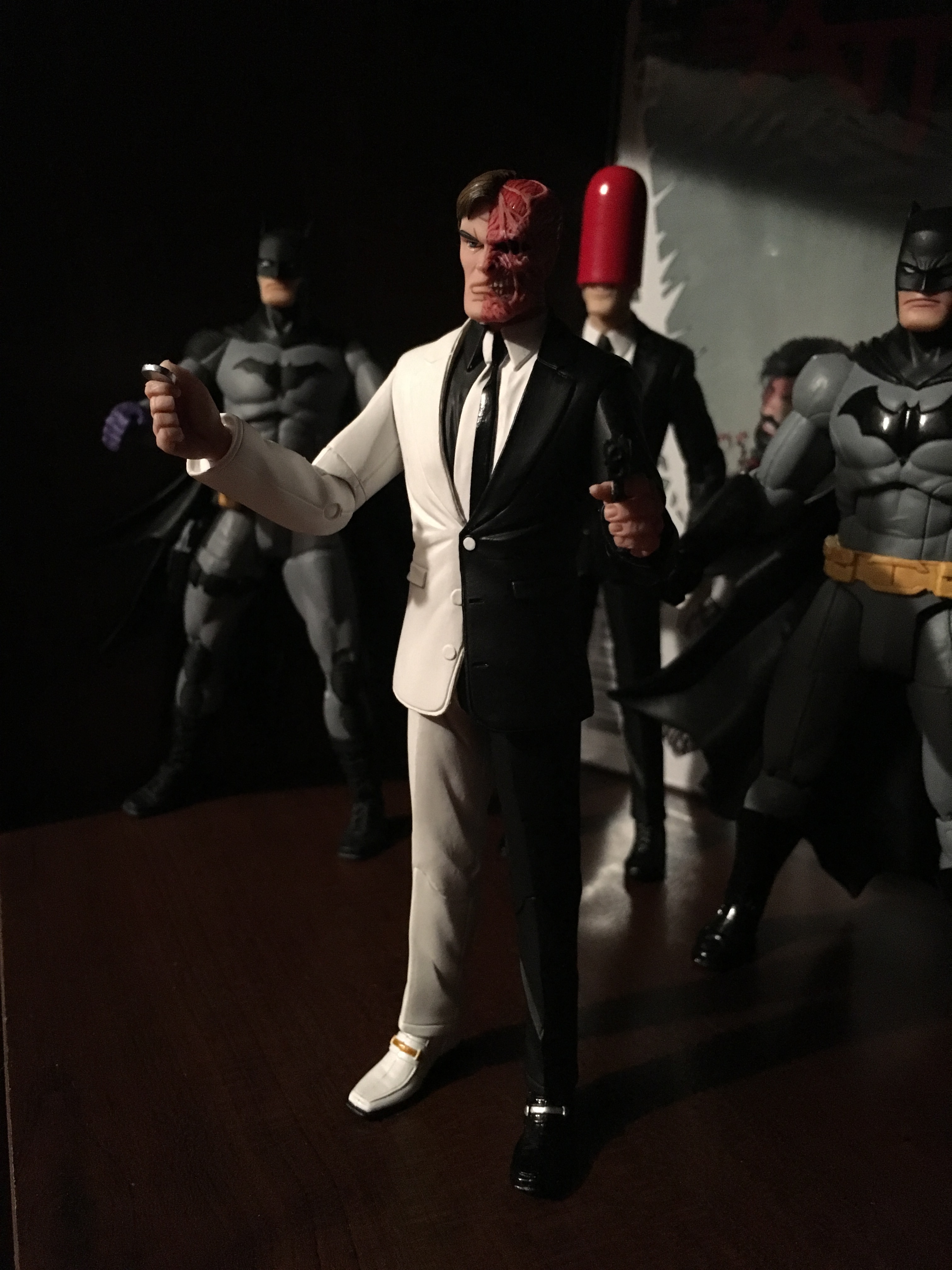 Capullo went with the now-typical black-and-white suit, which I’m tired of, but hey, what are you gonna do? Tomayto/tomahto.

What’s really important here is the facial sculpt. It’s horrifying. A good kind of horrifying. Two-Face should be repellent — and Capullo’s design here is exactly that. I don’t know why it never really occurred to me that Harvey Dent should have lost his left eye in the acid attack that changed his life, but damn if it doesn’t make all the sense in the world. 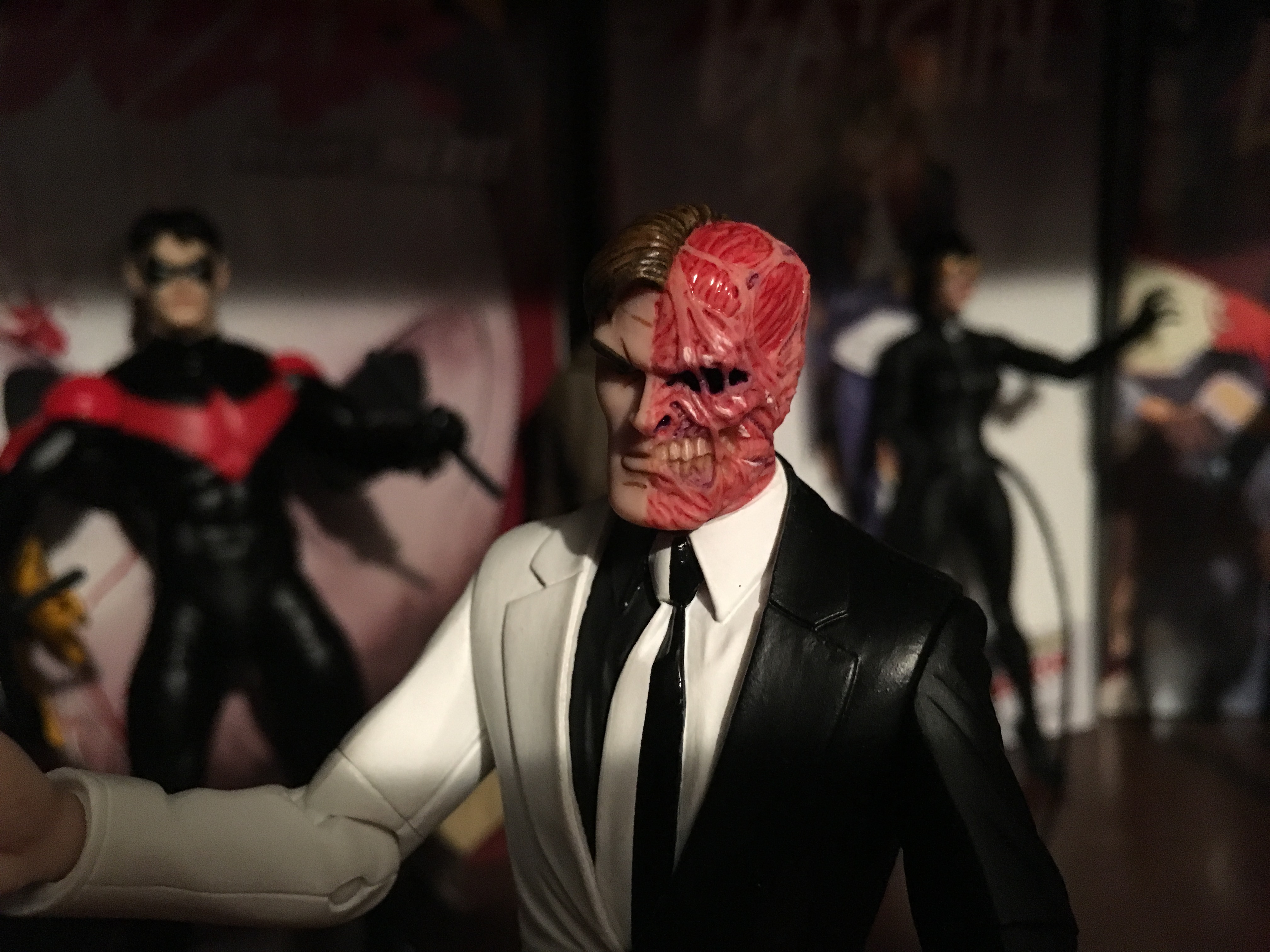 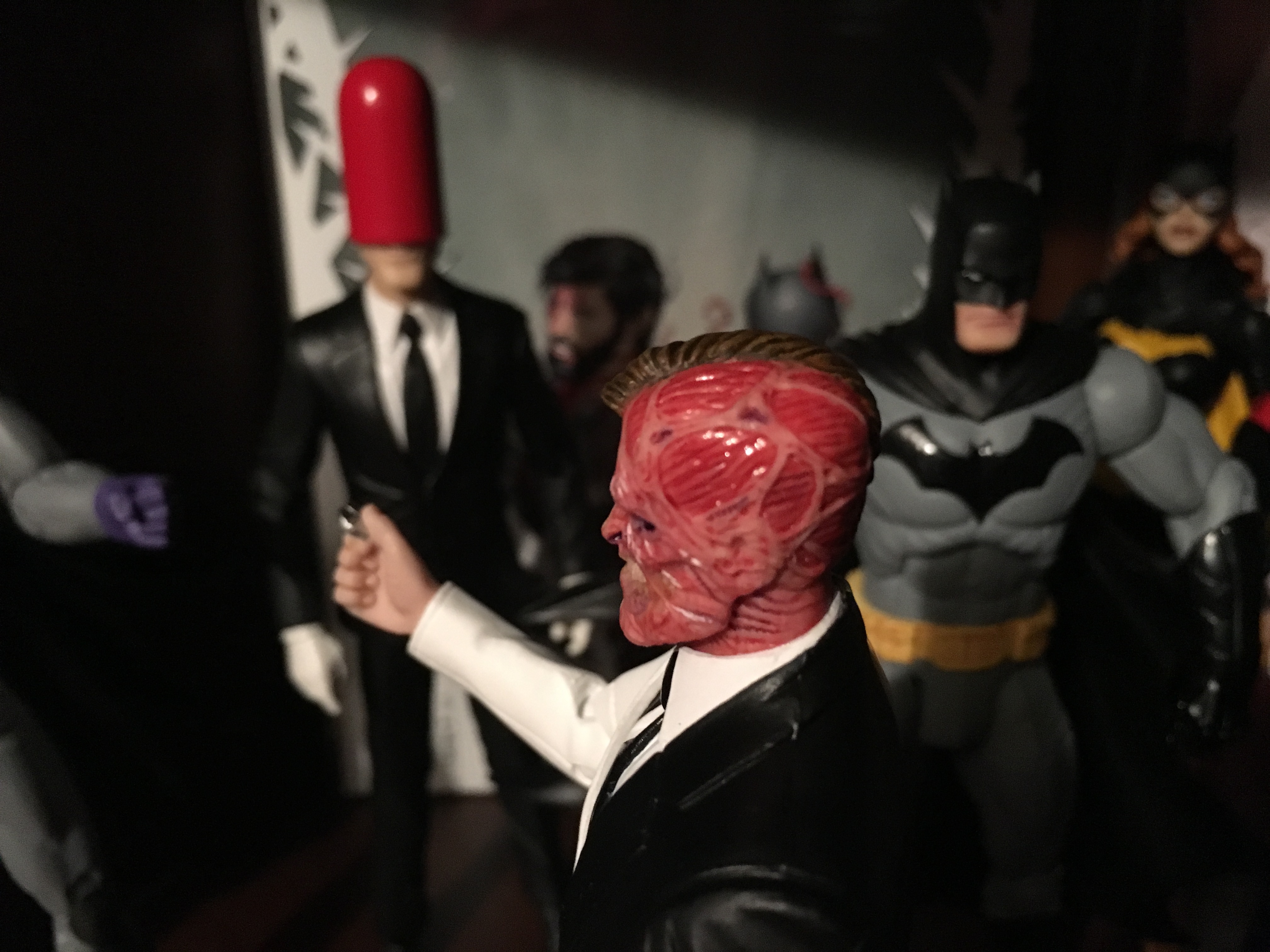 Seriously, that is nasty.

Two-Face should be the kind of guy whose henchmen would get nervous just being in his presence. His face should be so scary that people wouldn’t know which side to look at when talking to him. And if you pick wrong, maybe he pulls out that coin. 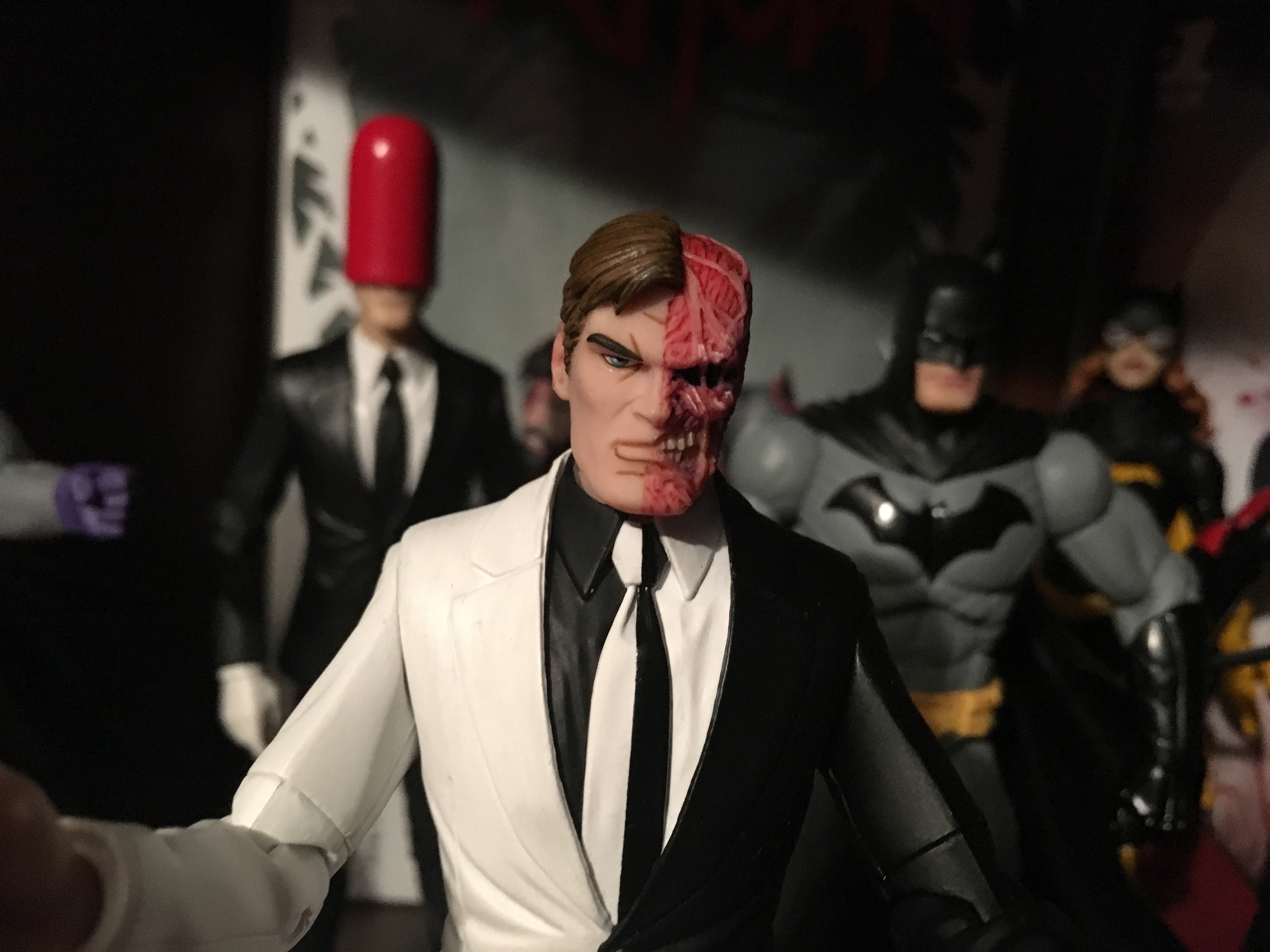 Speaking of the coin, Two-Face’s is molded into his hand, so it’s ever-present. On one side, I like having a separate coin, but the flip side is you then have to keep track of a really tiny accessory. A molded coin wins the toss, I guess. The figure, fittingly, comes with two handguns, except he can only hold one at a time. Always good to have two of everything, though — right, Harvey?

One last thing: I dig the shoes. I especially like the gaudy, gold trim on the white shoe, the “clean side” shoe. 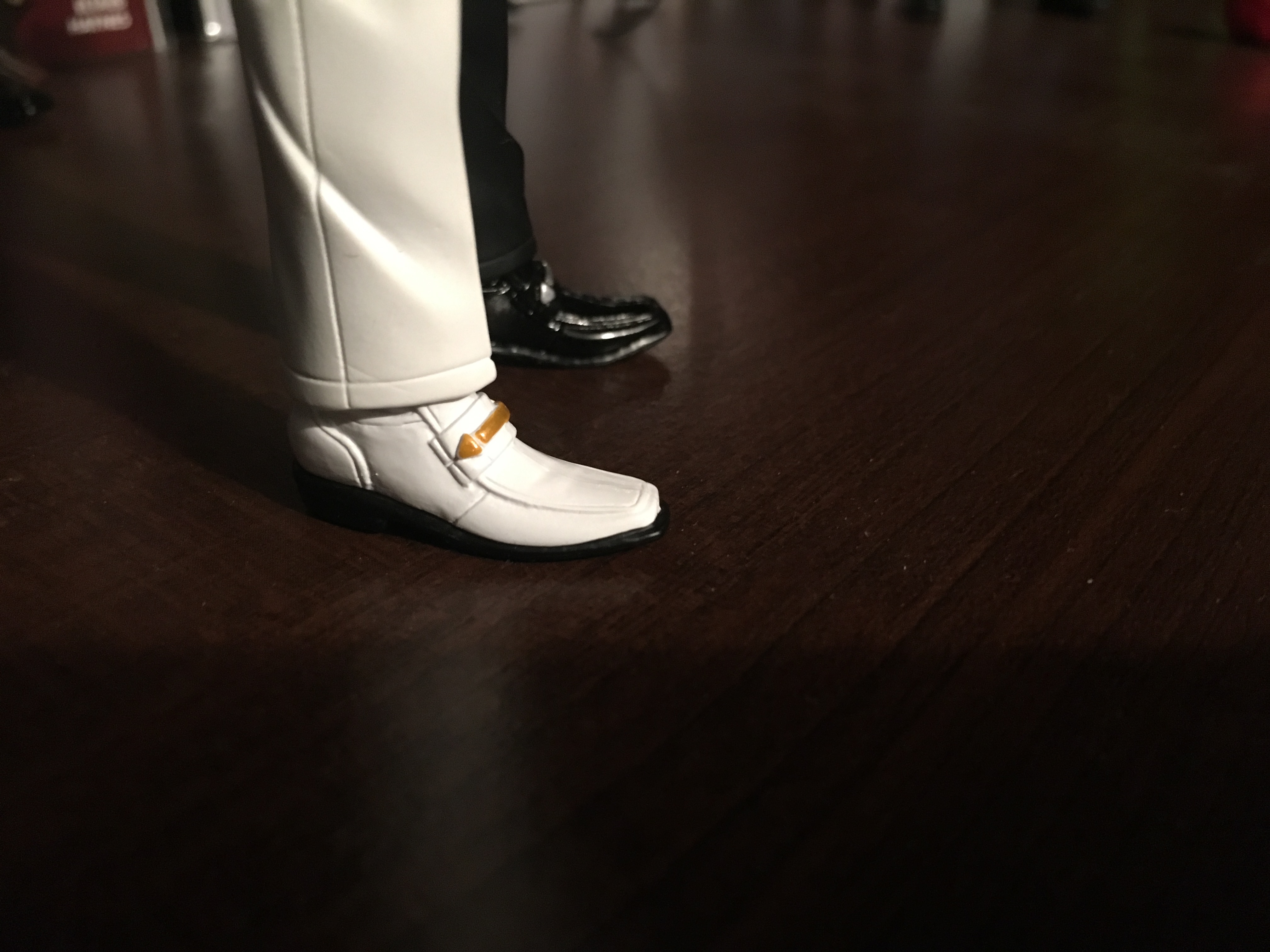 It doesn’t say narcissistic, crusading DA as much as it does flamboyant gangster … like Scarface.

ALSO ON THE BATSHELVES THIS WEEK: Batman and Robin Eternal #13 keeps the wheels turning, along with Batman: Europa #3. Justice League #47 is out this week, too.