13 PHOTOS: The headquarters for your soul…

To mix Bat-metaphors, there have been all sorts of wonderful toys released since the Batman ’66 merch deal was nailed down several years ago.

We’ve gotten high-, middle- and low-end action figures, playsets, statues, props, publications and gear — you name it — from a variety of companies. I’ve written about most of it at one point or another and it’s been a real joy.

So I can tell you with little hesitation that the one item that tops them all just came out this week — Factory Entertainment’s 1:50-scale replica of the 1966 Batcave. 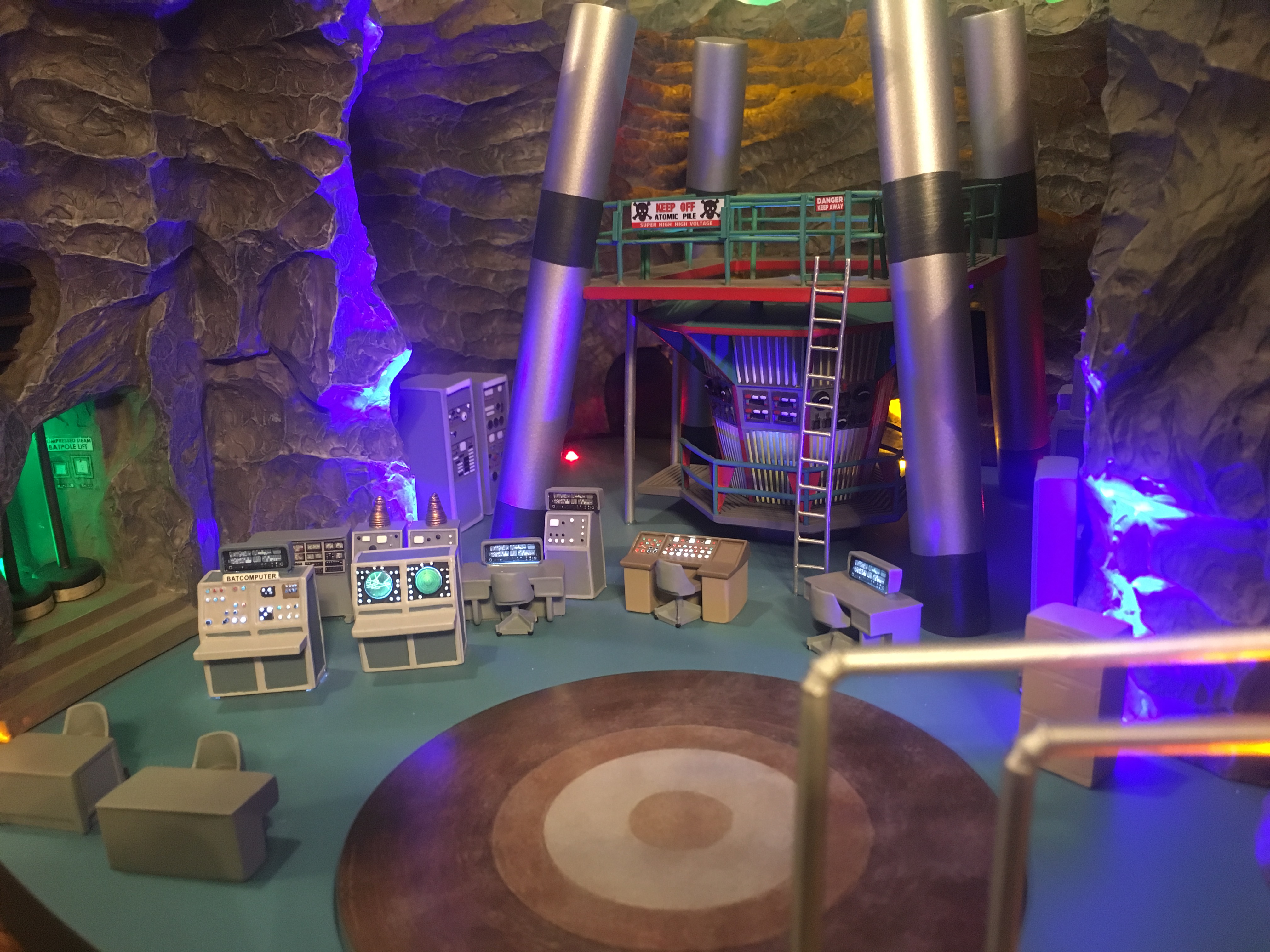 This is, simply put, an extraordinary work of vision and craftsmanship and particularly startling to see up close.

Now, before I go any further, I have to acknowledge a bit of bias. We’ve been chronicling the creation of this model for nearly two years, since shortly after the initial prototype debuted at San Diego Comic-Con, and have even helped the project along with reader feedback and other input. (Click here for our full range of stories, including behind-the-scenes galleries, a video tour, etc.)

But none of that alters the impact of the final product, which is a stunning replica of the most recognizable version of Batman’s headquarters. 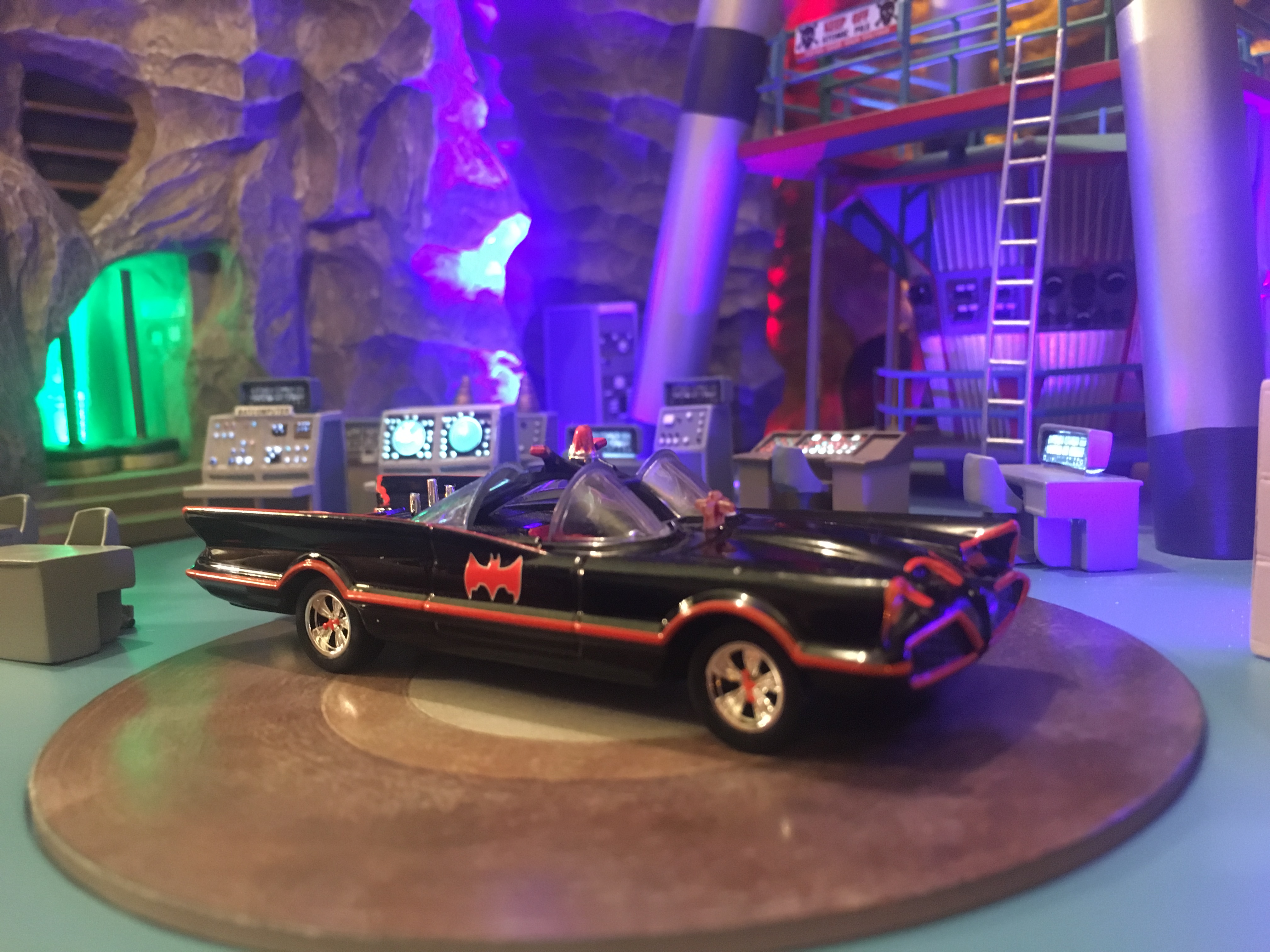 I don’t know about you, but my first Batcave was made from a shoebox and crayons and it was based 100 percent by what I saw on television. I graduated to the Mego Batcave, which will forever remain my all-time favorite toy.

But Factory Entertainment – in particular creative director Barry Eldridge and sculptor Kyle Millard — has taken all that childlike wonder and inspiration and built a headquarters for your soul. When you sit before their Batcave, with all its lights glowing, it tunnels into that part of you that still believes in the fantastic, allowing you to visit that secret haven you always wished were beneath your home, stately or not.

This kind of emotional impact, however, can only be achieved by commitment to first-rate workmanship and dedication to minute detail: 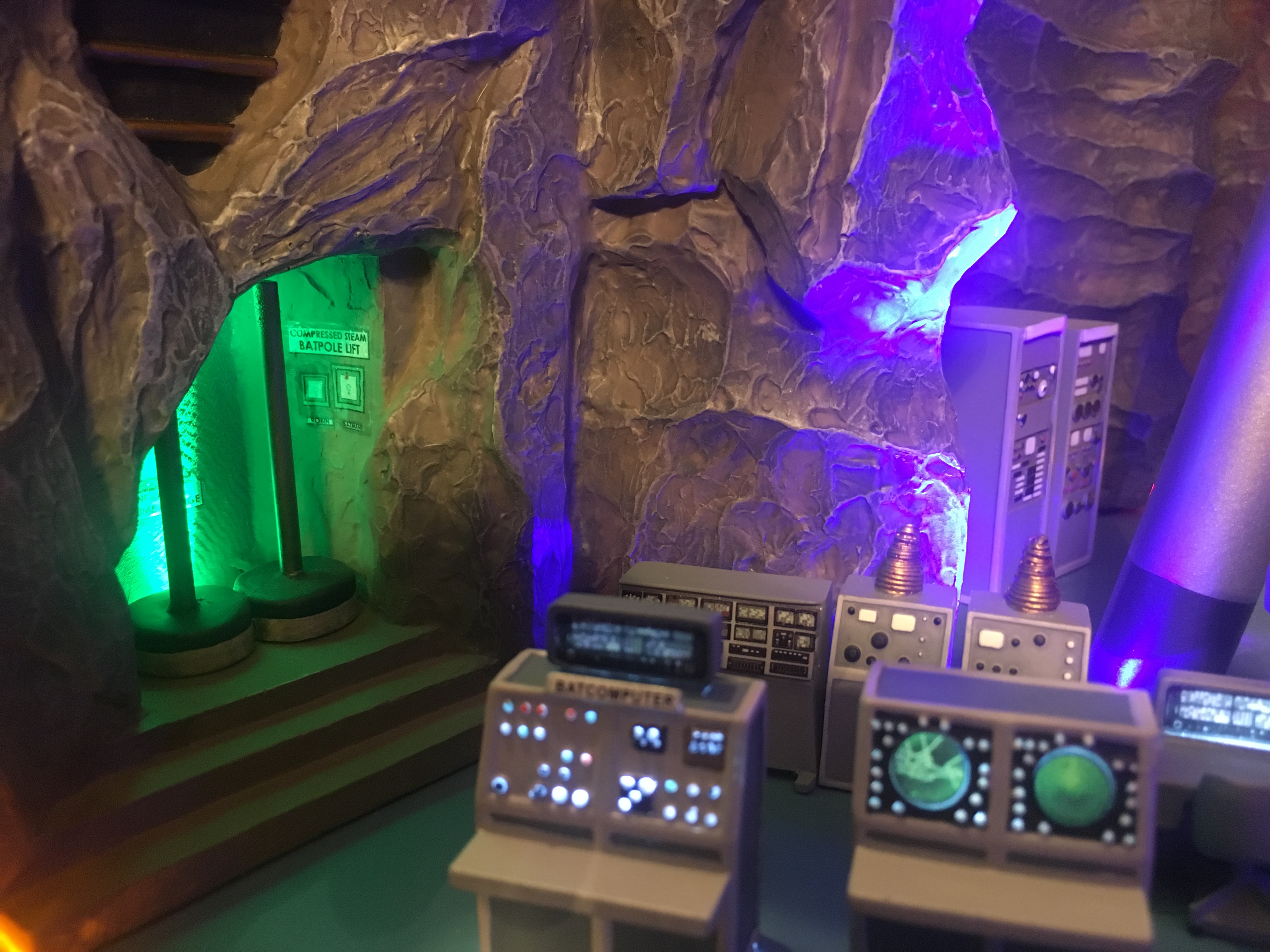 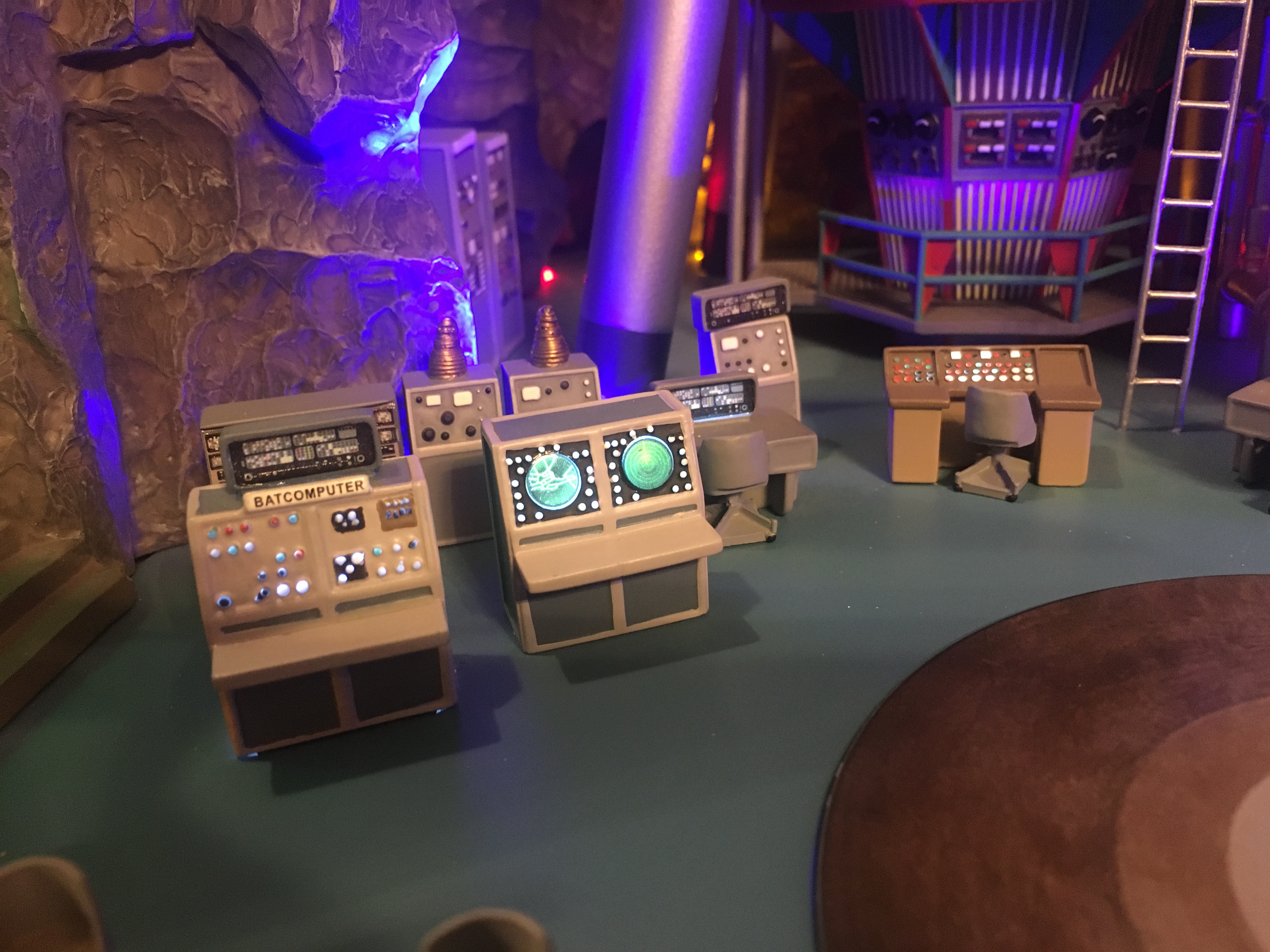 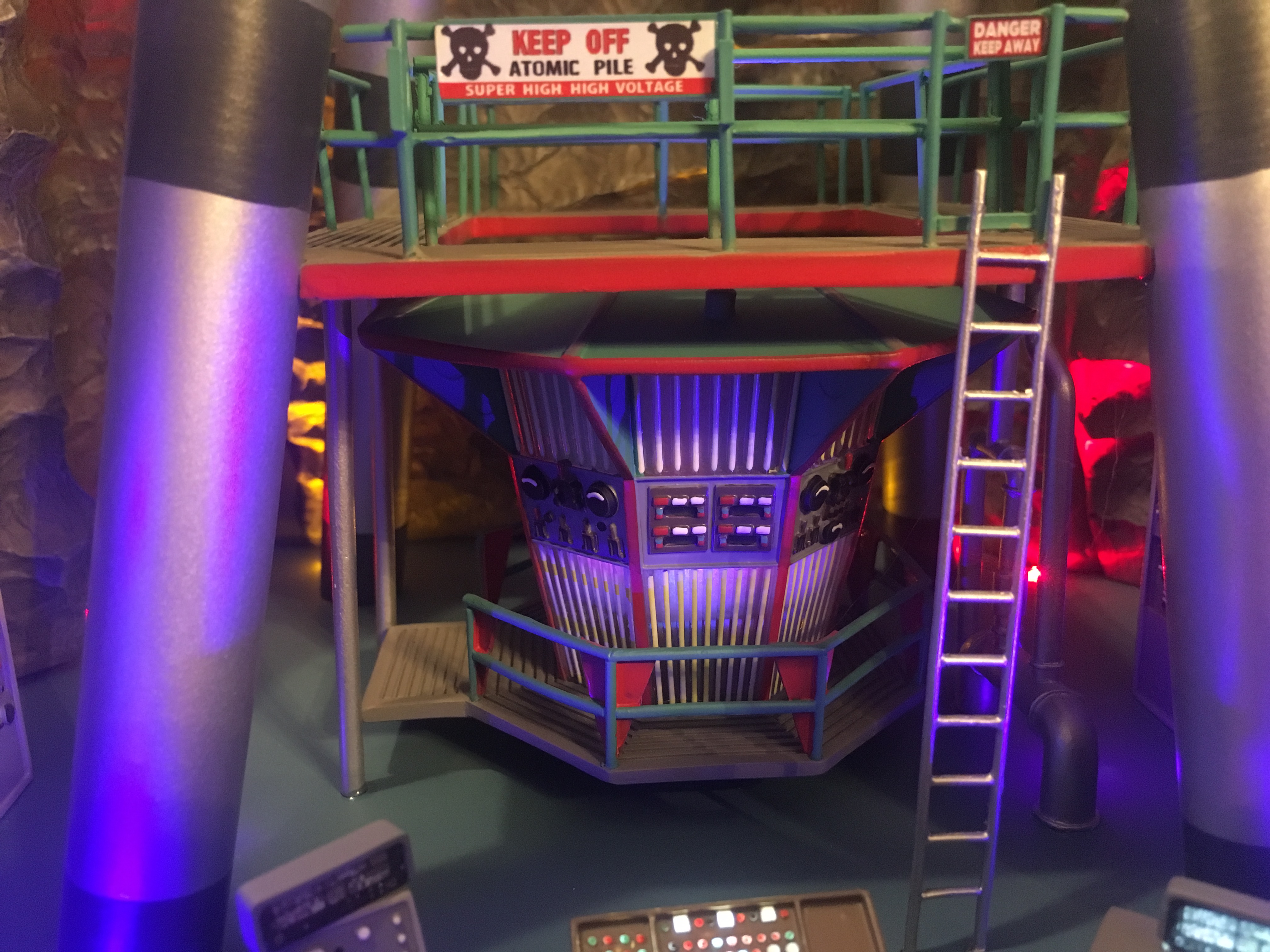 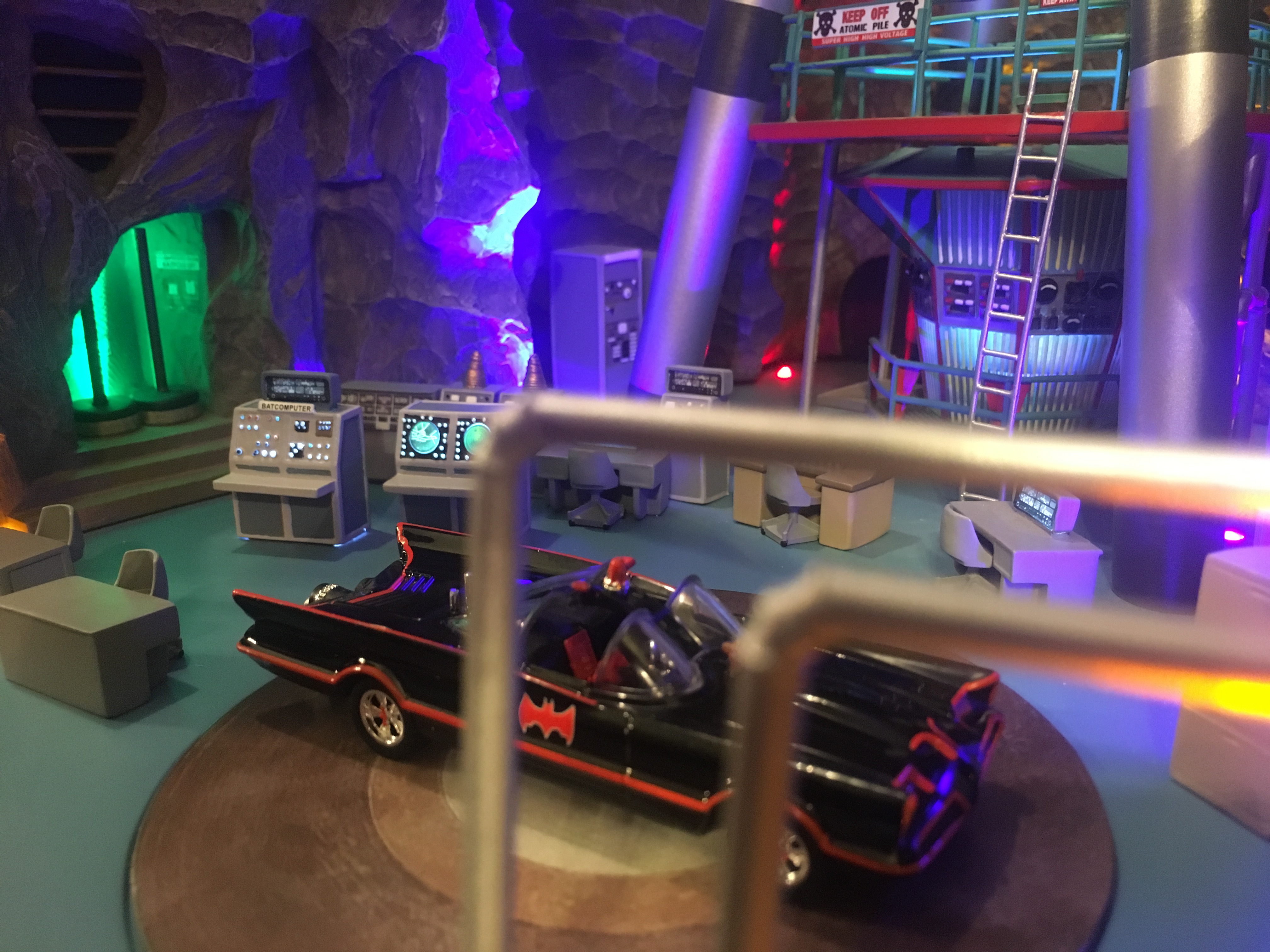 Here are the nuts and bolts, in case you’ve not been following along: The Batcave is 18” x 14” x 9” and about 20 pounds of polyresin, PVC and plastic. There are two sets of lighting schemes that can be used alone or together. One circuit handles the atmospheric lighting, including the atomic pile — which features a rotating light pattern — while the other covers the Bat-equipment. (It’s powered by six AAA batteries but includes a cord should you prefer to plug it into the wall.)

The lighting scheme in particular adds a dimension that aligns with what the show’s set designers accomplished. The DayGlo colors were most obvious in the characters’ outfits and the villains’ lairs but the Batcave set benefited substantially by the hues employed on the “stone” walls. The effect was subtle, yet essential to the Batcave’s ambience, and the best decision Factory made was to listen to fans and go all in by wiring its model. 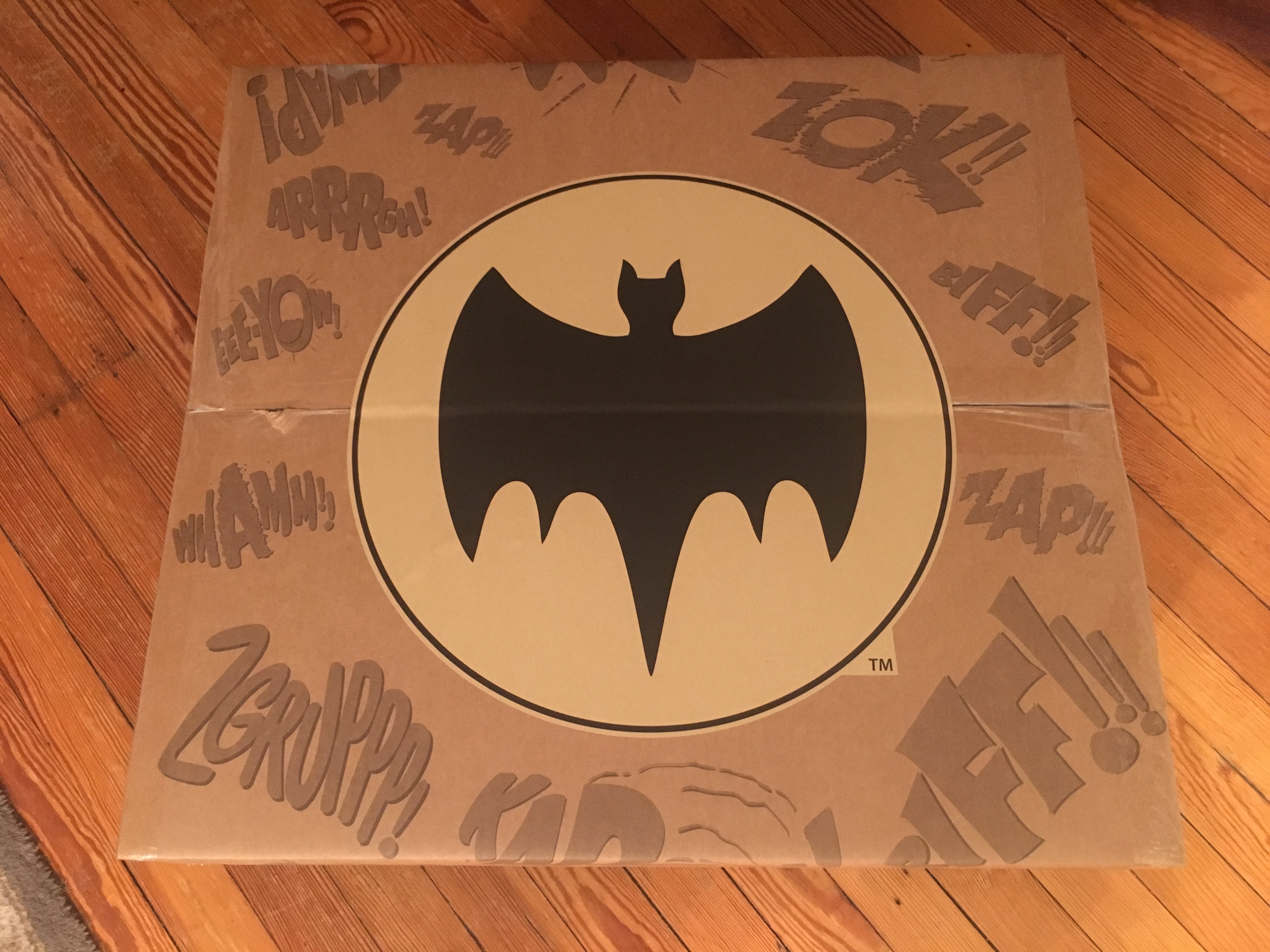 It comes in a box sealed with a huge Batsignal sticker… 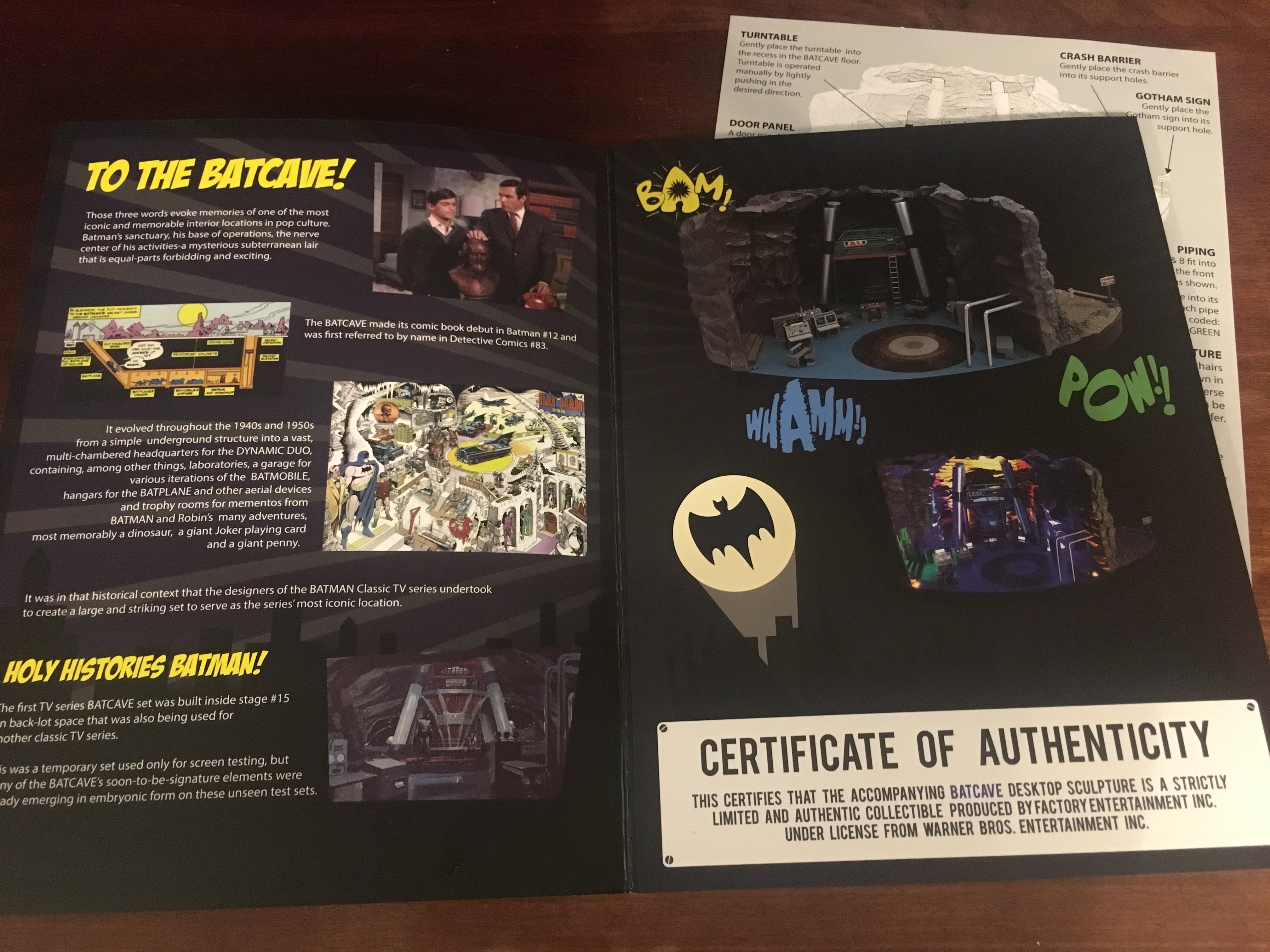 … and an informational booklet that doubles as a certificate of authenticity. (There’s also instructions, natch.)

Now comes the downside, and there’s no getting around it: This is an expensive item, one of the priciest of all modern Batman ’66 items: It lists for $799. That price has given rise to some complaints that particular items were not included, most notably a Batmobile or miniature figures.

To me, it’s inevitable that a level of exactitude would be sacrificed in the name of practicality. In some cases, it’s because of scale. In others, it’s because of licensing issues: Factory isn’t allowed to produce Batmobiles or figures. Plus, the Batcave itself was always changing, depending on plot necessities and camera angles.

In the end, it’s quibbling because this is not just unlike anything we’ve ever seen come to market, it’s something none of us ever expected to see, up until just a few years ago.

And what’s important is what is there – not what isn’t: The Batcomputer and other crime-fighting apparatus blink on and off on separate circuits, giving the illusion that the consoles are independent from the others. Furniture and equipment can be moved in whatever arrangements you wish. The manually controlled Batmobile turntable moves smoothly under your finger. The Batcave’s entrance is hidden by a moveable boulder. There’s the Gotham City 14 Miles sign. The effect is not merely charming. It’s entrancing.

If you ever played as a child with that shoebox Batcave, this is what you were imagining.

Because this is an astonishing replica of a place we all wanted to visit and never leave unless there was a clue to solve, a criminal to catch — an adventure that would never end. The Batcave is on sale now. There are only 250 and they’re mostly sold out. You can still order one directly from Factory — click here — and yes, they take payment plans. You should also ask your comics shop if they plan on carrying it or you can try your favorite online retailer.

— For the complete FACTORY ENTERTAINMENT 1966 BATCAVE Index of stories and features: Click here.

— For our EXCLUSIVE video tour of the production model: Click here.