Out of the mists of a bygone age ride Robert E. Howard’s greatest heroes. And by a bygone age I mean the 1970s.

These pieces of toy nostalgia are brought to you by the modern gurus of all things Mego, Figures Toy Company, who are currently in the midst of reproducing and adding to the pantheon of dolls first made so many years ago.

Back in the day, Mego, as part of their Marvel line of World’s Greatest Super Heroes, produced a Conan the Barbarian figure. Now, FTC brings back the classic Mego Conan — along with some of his sword-and-sandal brethren, the great Howard creations, King Kull and Solomon Kane. 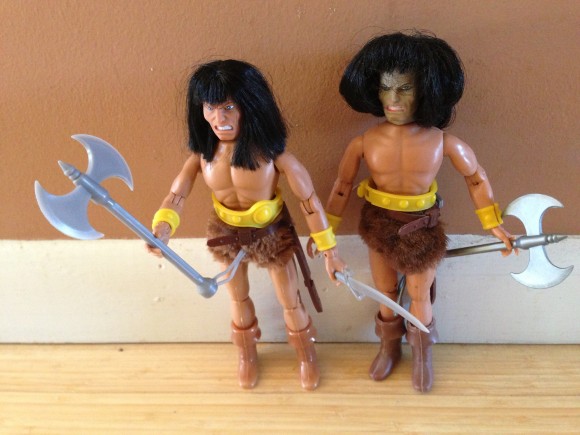 I compared the new Conan side by side with the original doll to show you the differences 40 years can make. On the left you can see the new version and on the right is my zombie-faced, Gene Simmons-haired ’70s doll.

FTC reproduced the sparse accessories that came with the originals: From ax to sword to fur loin cloth to gladiator belt to sword belt to boots to gauntlets, it’s all there. The new toy’s remolded body seems a bit skinnier, so Conan looks a little sickly next to the original doll, but the Mego aesthetic is certainly there. And the new toy’s hair is vastly improved, giving the figure a real John Buscema look. 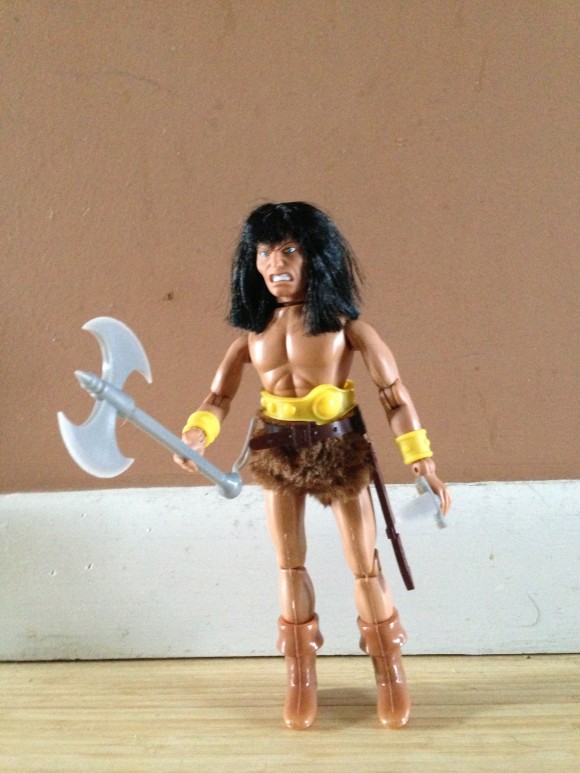 The accessories are solid but won’t break easily or bend out of shape. The way the neck attaches to the body makes the figure look slightly decapitated, something I hope the designers of these toys deal with before they produce the next shirtless figure. Conan holds his weapons nicely and the paint apps are perfect. The figure can use some adjustments but all in all, Conan is a fitting tribute to his beloved Mego ancestor. 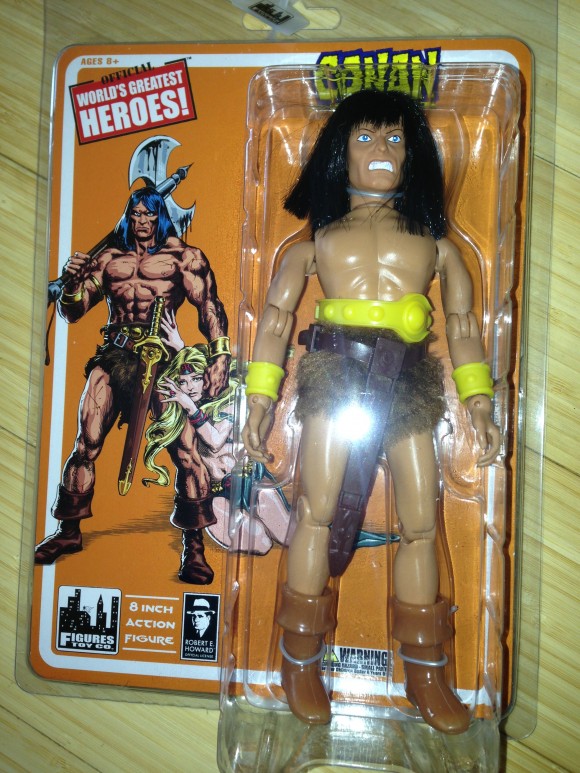 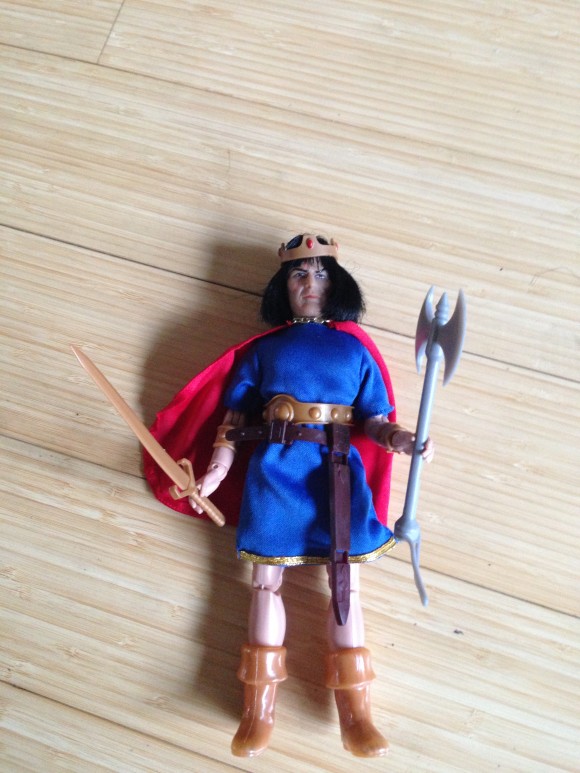 King Kull is a figure that this Megohead and old-school Marvel fan can’t quite believe exists — a character from the same Marvel-Mego era as Conan. Kull uses the Conan accessories, all of them, with a recolored brown sword. It’s the clothes that make this figure something truly special — his tunic, red cape, and crown are pulled right out of a Bronze Age comic. 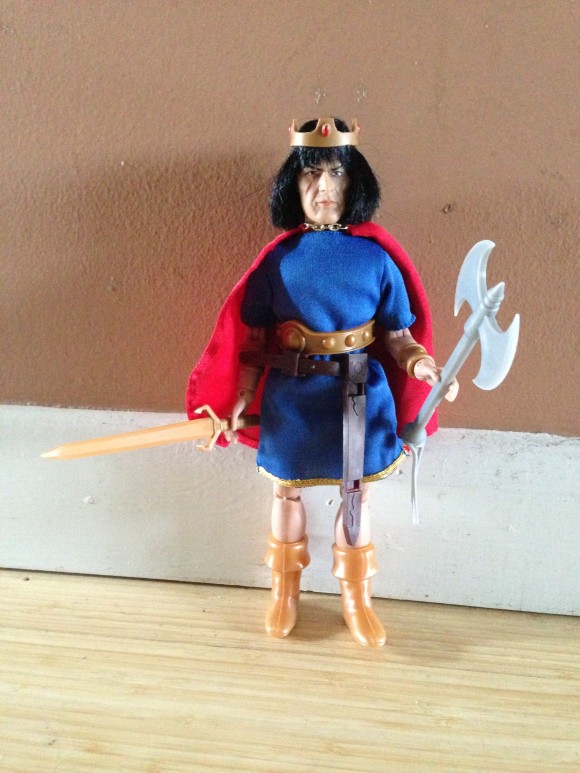 Covering the seams on the body eliminates the problems that hurt Conan. But like Conan’s, Kull’s hair is well rooted and lustrous, perfectly framing his well sculpted face. The slight scar on his cragged face is reminiscent of old-time G.I. Joes. The crown is a rubbery material and fits perfectly on Kull’s head. Like all the new Megos, these figures stand solidly. 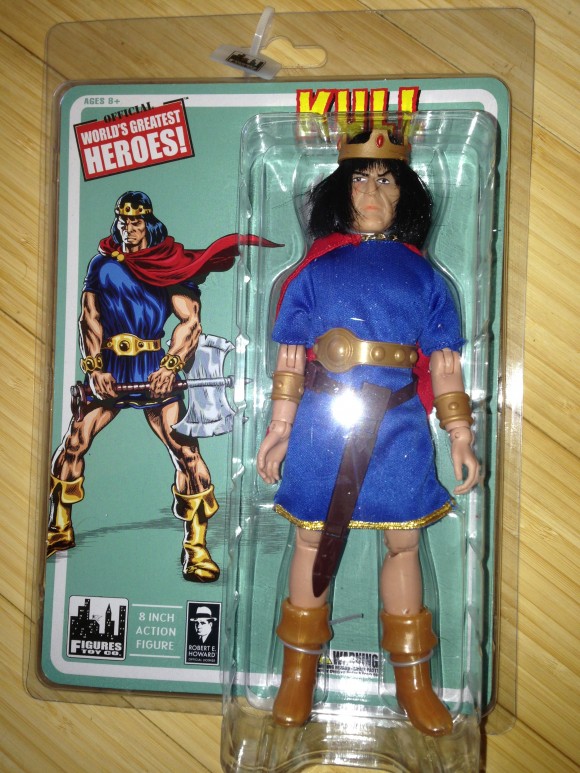 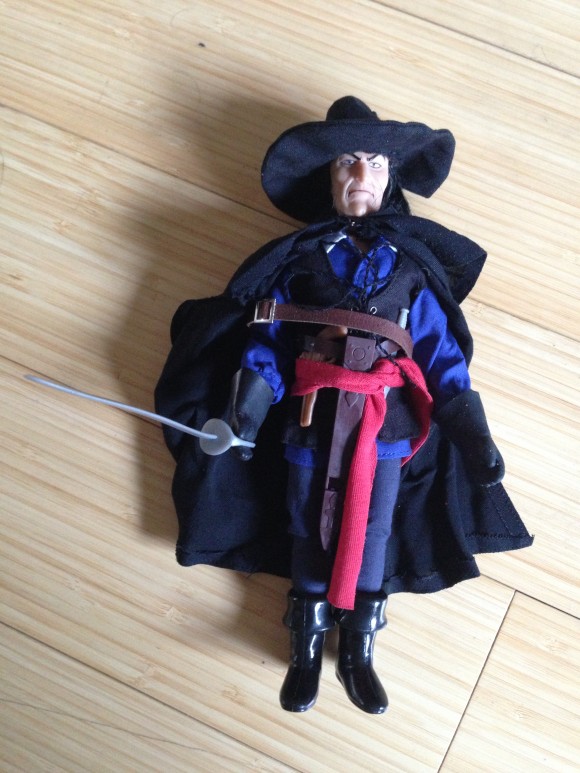 Another figure I never dreamed would actually get made.

For some reason, the head sculpt on Kane seems way too large. The facial sculpt nicely evokes a classic Peter Cushing feel, but the head looks like it should be on a 12-inch G.I. Joe-like body. The oblong head is off-putting but not the accessories and clothes. The hat is gorgeous and perfectly fits on Kane’s head even with the thick, rooted hair. The head looks better with the hat and the figure displays very nicely out of the package.

Kane’s weapons are not reproductions of Conan‘s but originally sculpted pieces. He comes with a pistol, a rapier, a sword belt, a knife, a sash, boots (rubbery), and gloves (rubbery). The sash holds all the weapons in place, in a nice piece of toy engineering. 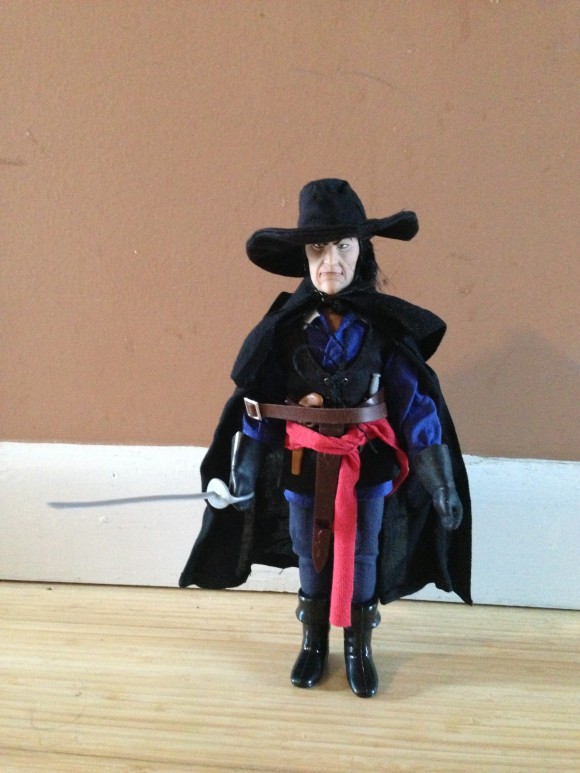 The cape is thick and again offsets the figure’s too-big head. The vest piece breaks up the outfit well — and it looks like this monster slayer could pull a weapon out of any fold of this elaborate get-up. 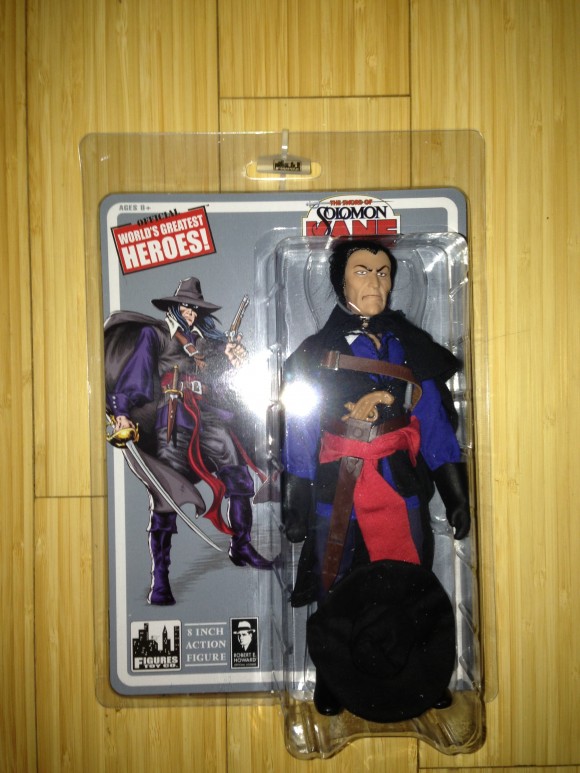 As for the packaging, we have the usual Figures Toy Company resealable clamshell, with elaborate artwork on the card, including the classic Marvel logos. They run about $30 each, depending on where you get them.