The Lurid Misfire That Was 1984’s SHEENA, QUEEN OF THE JUNGLE

Home » COMICS HISTORY » The Lurid Misfire That Was 1984’s SHEENA, QUEEN OF THE JUNGLE

Sheena, Queen of the Jungle, a co-creation of the legendary Will Eisner and Jerry Iger, debuted in a 1937 British comic book and then moved to American shores a year later, in Jumbo Comics #1 (cover dated Sept. 1938—making this her 80th anniversary year).

Massively popular from the start, Sheena would receive her own series in spring of 1942, making her the first female comic-book hero to headline her own title (beating DC’s Wonder Woman by a few months). Sheena continued to be a comic-book star well into the late 1950s, then jumped into live action with a syndicated TV series that ran for one season in 1955-56. 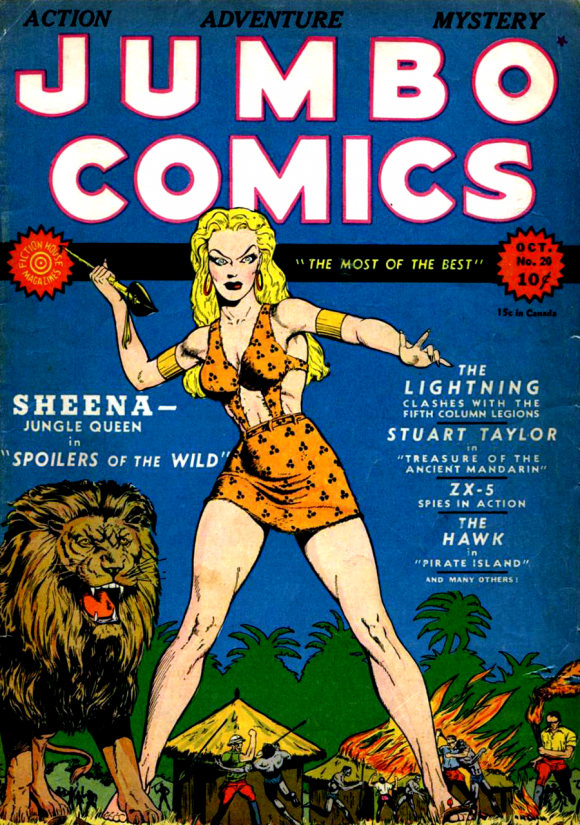 Unlike her fellow jungle hero Tarzan, who has never truly gone away, Sheena pretty much laid dormant for a few decades as an ongoing concern (though she was mentioned in 1970s songs by the Ramones and Bruce Springsteen, proving she left an impression on a lot of young boys).

Documentary filmmaker Paul Aratow got the idea to make a Sheena movie in the 1970s, and in quick succession had a deal with Universal Pictures with the idea it would star Raquel Welch. But then, as happens with a lot of movies, the momentum seemed to stall, and by the time Sheena, Queen of the Jungle was finally put into production in 1984, it was quite a different movie than the one intended.

Gone was Welch, as was the script by David Newman (who worked on the screenplay for 1978’s Superman). Now with director John Guillermin (The Towering Inferno, 1976’s King Kong) at the helm, Lorenzo Semple Jr. was brought in to write, which was an indication of the kind of film Guillermin intended to make. After all, you don’t hire the guy who helped craft the campy tone of Batman ’66 and 1980’s Flash Gordon unless you’re going for a lighter tone. 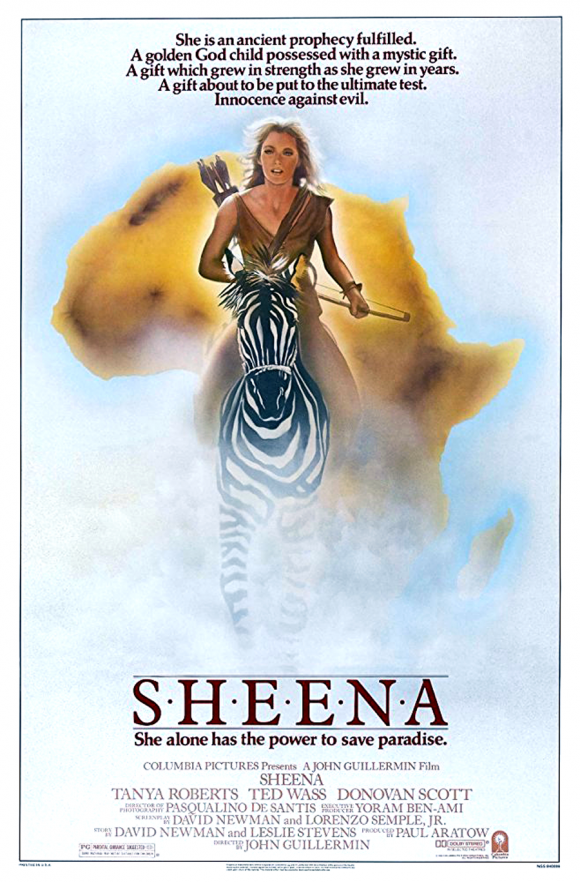 Guillermin cast former Charlie’s Angel (and future Bond Girl) Tanya Roberts in the lead role, and TV actor Ted Wass as Vic Casey, a reporter who plays Lois Lane to Sheena’s Superman. Sheena, Queen of the Jungle opens in the past, with geologists Philip and Betsy Ames investigating supposed “healing powers” that emanate from the sacred Gudjara Mountain.

When the Ameses are killed in a cave-in, their young daughter Janet is adopted by the local tribe, which believes she is a child of gods. Renamed Sheena, the young girl grows up and develops speed, stamina, strength, agility, as well as the ability to telepathically communicate with the animal kingdom.

In present day, Vic Casey and his cameraman Fletch Agronsky (Donovan Scott) are in the nation of Tigora to do a piece on a former football player, but they stumble into a much bigger story when Tigora’s king is assassinated and Sheena’s shaman is framed for it. Vic and Fletch make their way to a prison compound to interview the shaman, and are shocked to see the comely Sheena (riding a painted horse DBA a zebra) arrive to rescue her, accompanied by an elephant and a chimpanzee, who seem to be following Sheena’s commands.

The man behind the assassination plot, Prince Otwani (Trevor Thomas), hires a team of mercenaries named the Black Berets to murder the Tigoran people so the land will be ripe for strip-mining. Vic teams with Sheena to try and stop the mercenaries and put an end to the royal coup by Otwani. At one point Sheena is kidnapped by Otwani and Countess Zanda (France Zobda), but escapes by telepathically commanding a flock of flamingos to attack the helicopter she and Zanda are in, leading to Zanda falling to her death.

Later, Vic saves Sheena’s life by crashing into Otwani’s vehicle as it is about to hit her, leaving him with horrible burns. Sheena uses the land’s restorative powers to heal Vic, and eventually the two fall in love. Vic initially wants to stay with Sheena, but realizes if the outside world gets word of Sheena and her miraculous home, corporations will arrive and destroy it (as the usually do). After a romantic interlude, Vic takes a flight home, listening to a recording Sheena made for him declaring her love. Sheena watches the plane depart, and then rides her zebra Marika to celebrate her victory over evil. The End.

Sheena, Queen of the Jungle was a flop upon release and savaged by critics, quickly gaining a reputation as one of the great busts of the 1980s. I remember seeing it on cable when I was a kid, and watching it again for this article reminded me how confused this movie is: It tries to be a sort of kid-friendly Raiders of the Lost Ark/Tarzan hybrid, but the two extended nude scenes of Sheena bathing seem to indicate a different audience entirely (and how, exactly, is this movie rated PG?). Guillermin and Semple never find a consistent tone and stick with it.

The other main problem is the two leads. Nothing against Ms. Roberts, but she’s not much of an actress and putting the whole film on her shoulders is simply too much for her to handle (while Raquel Welch was no Katherine Hepburn, she at least had an undeniable movie-star charisma that helped her carry a number of B-level genre classics). Sheena’s dialogue is stiff and dull, and Roberts isn’t able to convey anything deeper or more interesting. Anyone who can survive—thrive, even—in the harsh African terrain must be pretty sharp and resourceful, but as portrayed Sheena seems almost like a bystander in the events happening around her. Never once does it seem like Sheena is truly queen of the jungle.

Not helping is Ted Wass, who for some reason Hollywood thought was the Next Big Thing (he headlined the awful Curse of the Pink Panther in 1983, trying to replace Peter Sellers in the franchise. Gadzooks.) Wass’ Vic Casey isn’t funny or charming, and it’s not plausible for a moment that Sheena would fall for him. There’s a cringe-worthy moment at the end of the film when Sheena and Vic are about to have sex, and he picks her up and she swoons like a new bride crossing the threshold. Sheesh.

There are bits and pieces here that hint at the better movie that could have been made, like when the Black Berets are hunting Vic, and Sheena saves his life by hiding him up a tree. Sheena dangles upside down while commanding Vic to be quiet, making for a nice visual reminder of how at home she is out in the wild. Also cool is a brief POV tracking shot of a car peering through its broken windshield as it drives through a phalanx of the armed mercenaries.

The idea that Tigora has to be kept hidden from the rest of the “civilized” world lest it be despoiled would, of course, be used to greater effect in this year’s Black Panther (come to think of it, a Panther/Sheena team-up comic would be pretty cool). But these good moments are brief, buried deep within Sheena’s almost 2-hour(!) runtime. Maybe if Guillermin—who was in the death throes of his career (he followed this film up with the even worse King Kong Lives)—had chosen a different screenwriter, and leading woman, and leading man… 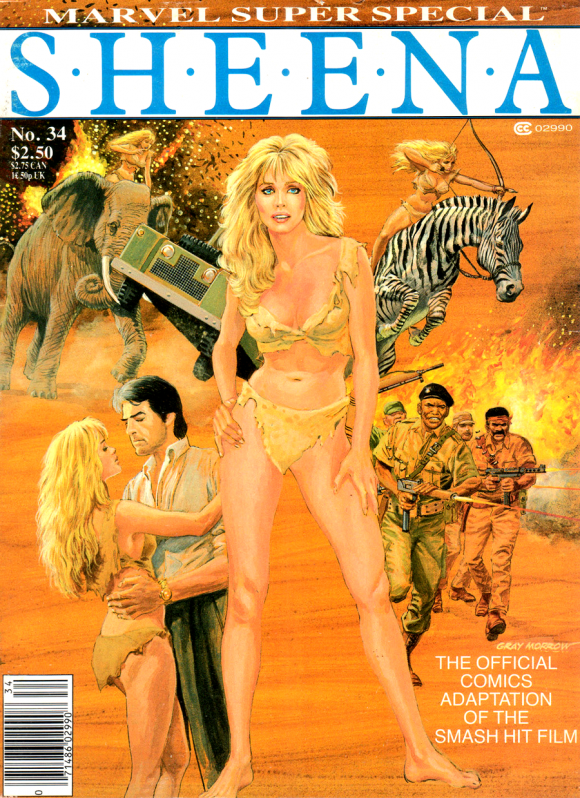 Of course, we don’t have to fully imagine a better version of Sheena, Queen of the Jungle, since one exists in the form of Marvel Super Special #34, an adaptation of the movie by Cary Burkett and the great Gray Morrow. The story, which runs 46 pages, doesn’t suffer from Roberts’ stiff line-readings and cuts some of the Vic Casey stuff. It also, of course, eliminates the two nude scenes, but Morrow was such a master at drawing beautiful—yet anatomically possible—women that the thrill teenage boys got from reading a Sheena comic is still very much intact. This Sheena actually looks comfortable commanding her animal friends, swinging through the jungle on vines, and wielding her bow and arrow like a half-nude Green Arrow (when she’s not making like Aquaman). Heck, Morrow even makes the flamingo attack scene not look quite so silly as it does in the film. 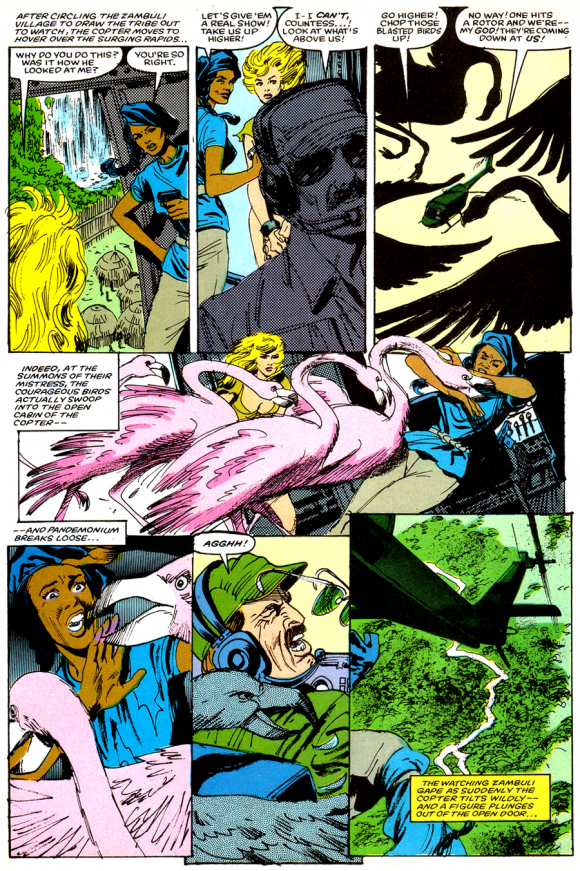 The special also includes extensive behind-the-scenes material on the making of the film, making sure to feature a few full-page shots of Roberts’ physique, which is impressive (if not in line with the kind of muscular body Sheena would actually have). While no classic, the Marvel Super Special is a passable adventure story, reminding readers why Sheena was such a big comic-book star at one time. 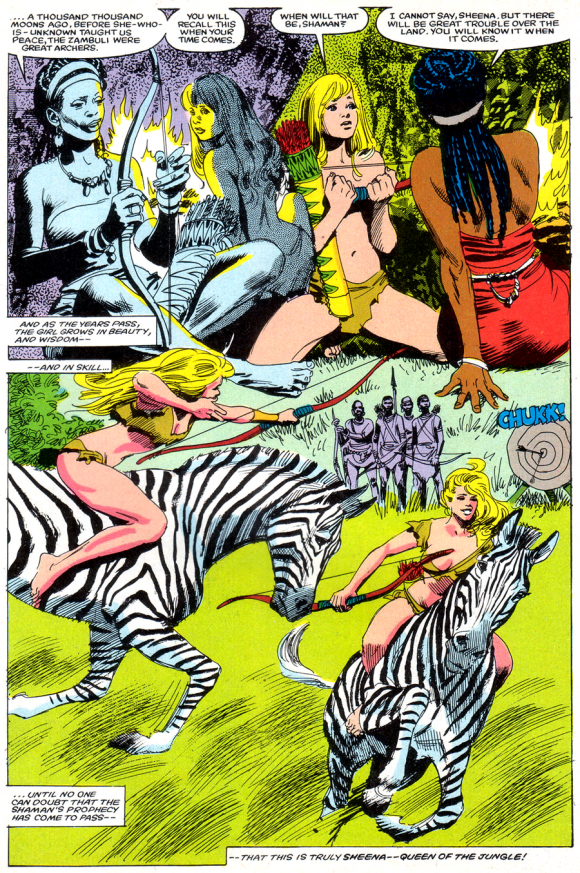 Despite Superman’s massive success in 1978, Hollywood in the 1980s still didn’t quite trust that comic-book movies could be anything more than exercises in light adventure and camp humor (oh, and two long nude scenes). Sheena, Queen of the Jungle is competently shot and clearly had some money behind it, but probably should have been produced in the 1970s, when producer Aratow first had the idea. He genuinely thought there was a market for a superhero adventure film starring a female hero that little girls could look up to, and of course he was right. Elements of both Wonder Woman and Black Panther are in Sheena, Queen of the Jungle, but unfortunately the end result is not a movie worthy of being mentioned in the same sentence as those two films — even though I just did.