Forget A Christmas Story — the holiday movie you gotta watch over and over is Tales From the Crypt. Um. What? 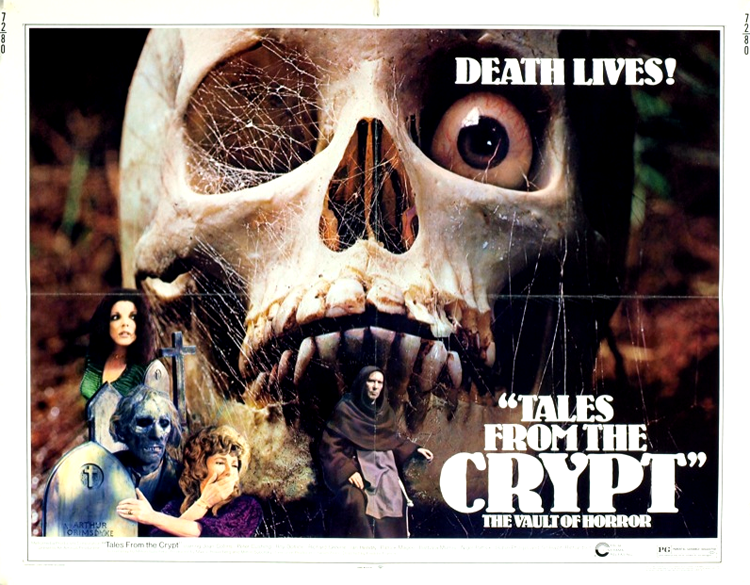 Now that it’s officially Christmas Week, let me paint you a picture: It’s snowing outside, the wind is howling. There’s a warm fire roaring. Popcorn is popping, while a bowl of eggnog sits on the counter, untouched, because it’s disgusting. You settle on the couch with your Significant Other to watch a classic holiday movie.

Yes, Tales From the Crypt—the 1972 British anthology film that adapts five classic EC Comics stories, pulled from the pages of Crypt, The Vault of Horror, and The Haunt of Fear, surrounded by a wraparound story that features legendary thespian Ralph Richardson as the Crypt Keeper in all but name.

After an intro that finds five seemingly disconnected tourists lost inside a spooky chamber with the aforementioned Crypt Keeper, Tales From the Crypt kicks off with what is one EC’s most famous, iconic stories: “…And All Through The House” (from The Vault of Horror #35). We find the beautiful Joanne Clayton (Joan Collins) and see that on Christmas Eve, she has hacked her husband to death, to cash in his insurance policy. Her young daughter calls from upstairs, but Joanne tells her to stay in bed—after all, Santa is coming! What Joanne doesn’t know is, Santa is coming—in the form of an escaped homicidal maniac, dressed as ol’ St. Nick. The killer shows up outside, but Joanne is afraid to call the police, lest her crime be discovered. 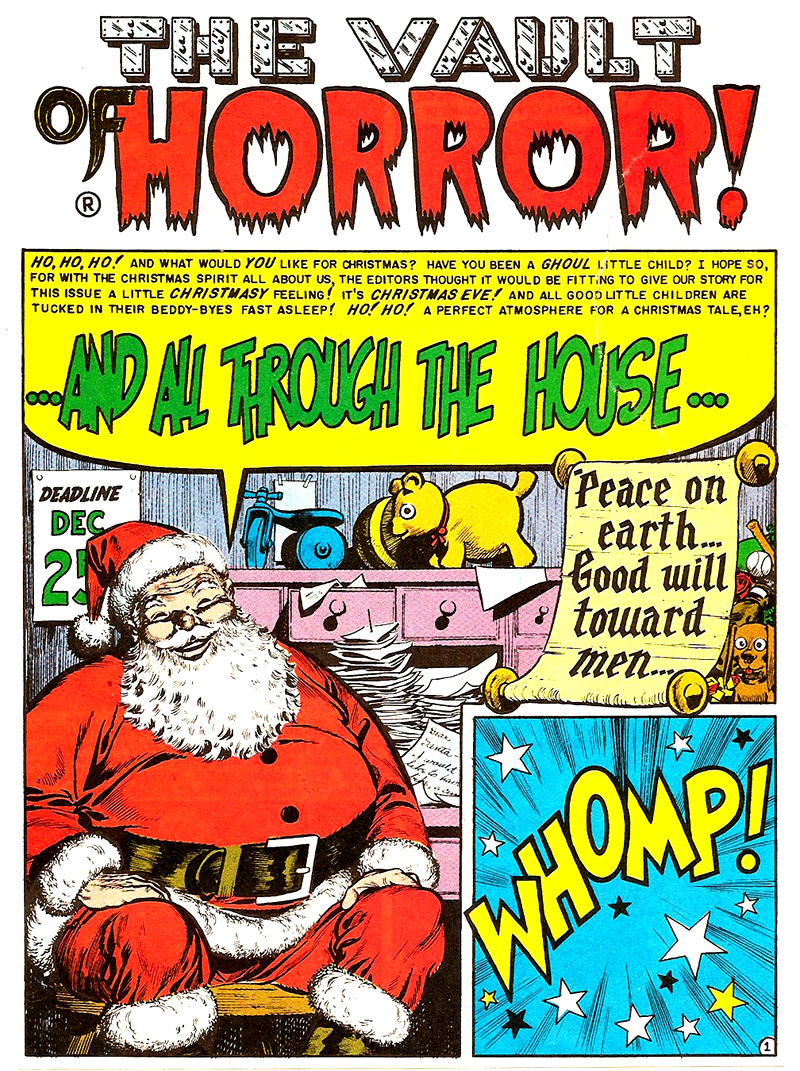 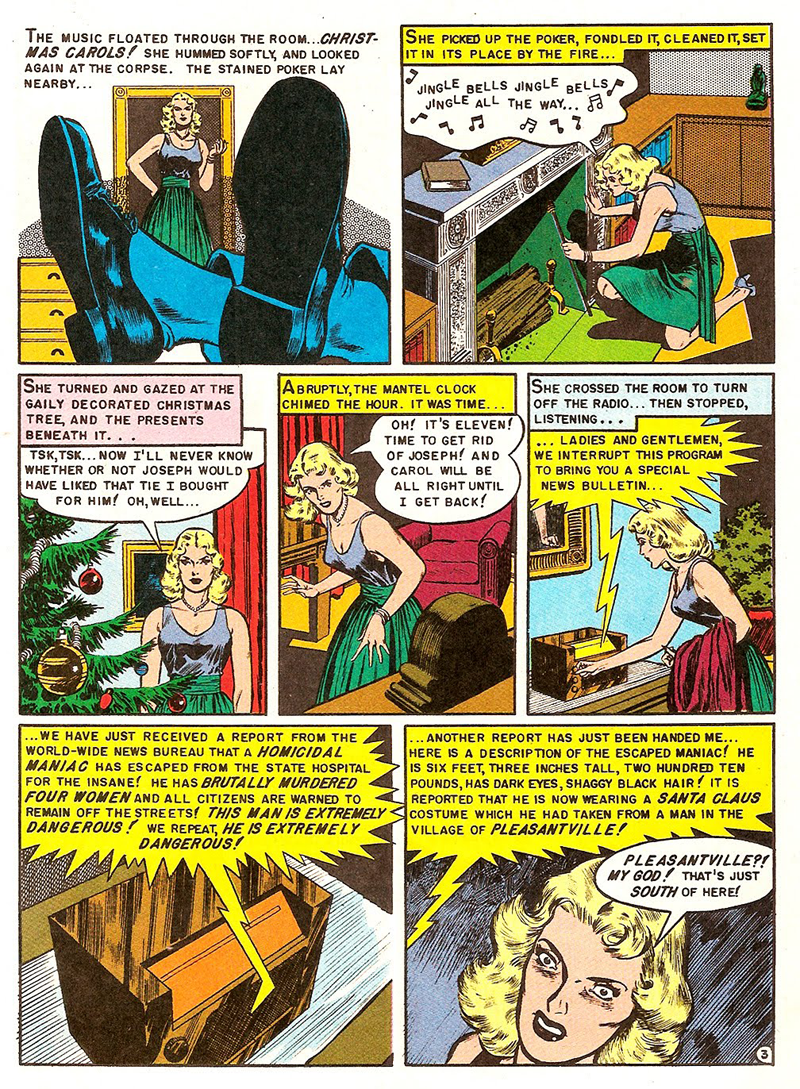 “House” is a pretty faithful and effective adaptation of the original story illustrated by the legendary Johnny Craig. The murder itself is inventively staged, and Collins looks ravishing, even while dragging her husband’s dead body through the house. The only place it goes wrong is when it adds an extra scene not in the original story, a mistake director Robert Zemeckis would not repeat when he used it in an early episode of HBO’s Tales From the Crypt TV series. The ending—which I will not spoil—to all three versions leaves a question dangling that was probably too awful to contemplate, even for the twisted minds of EC.

Crypt features no less than four additional stories, starring the other strangers who find themselves face-to-face with the Crypt Keeper: “Reflection of Death” (from Tales From the Crypt #23), about a guy who runs out on his family to be with his mistress. Soon after he gets in a fatal car accident…or does he? That’s followed by “Poetic Justice” (from The Haunt of Fear #12), starring the legendary Peter Cushing as a kindly old man named Arthur Grimsdyke who becomes the target of two vicious neighbors who want to drive him from their town, lest he drag down property values (oh, the horror!). For those only familiar with Cushing as Hammer’s Van Helsing or Alderaan Real Estate Developer Grand Moff Tarkin, his sweet, sad role here is quite a change of pace. He brings real pathos to a quickly sketched part as poor old Grimsdyke suffers one act of cruelty after another. 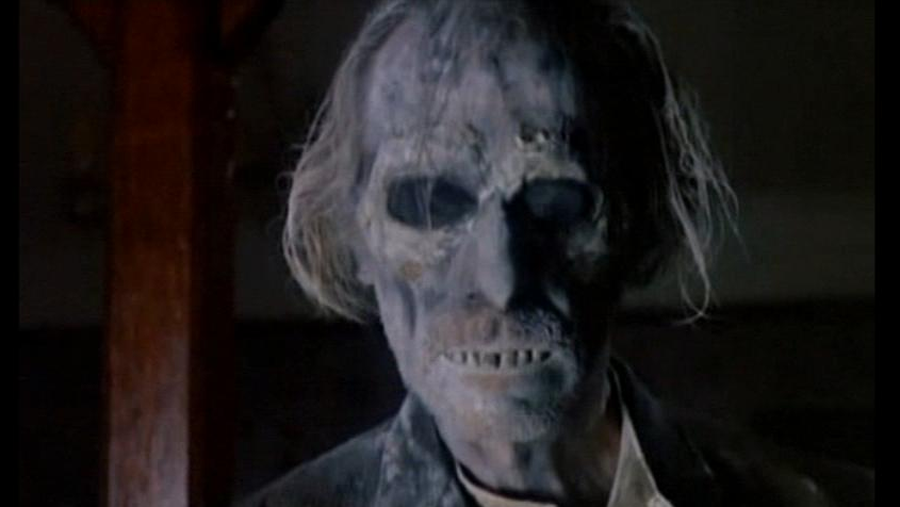 The fourth story, “Wish You Were Here” (from The Haunt of Fear #22) is a variation on the classic “The Monkey’s Paw”, where a couple discover a Chinese figurine that supposedly grants three wishes. It features, among other things, a motorcycle-driving Grim Reaper and a female lead character that learns the hard way that the devil is in the details (literally). The fifth and final tale, “Blind Alleys” (from Tales From the Crypt #46) is about the new administrator of a home for the blind, who uses his newfound position to put the screws to his patients, all for a few bucks. After they can stand no more, this group of blind men and women turn the tables on him, throwing the man into a death trap that wins points just for sheer inventiveness. 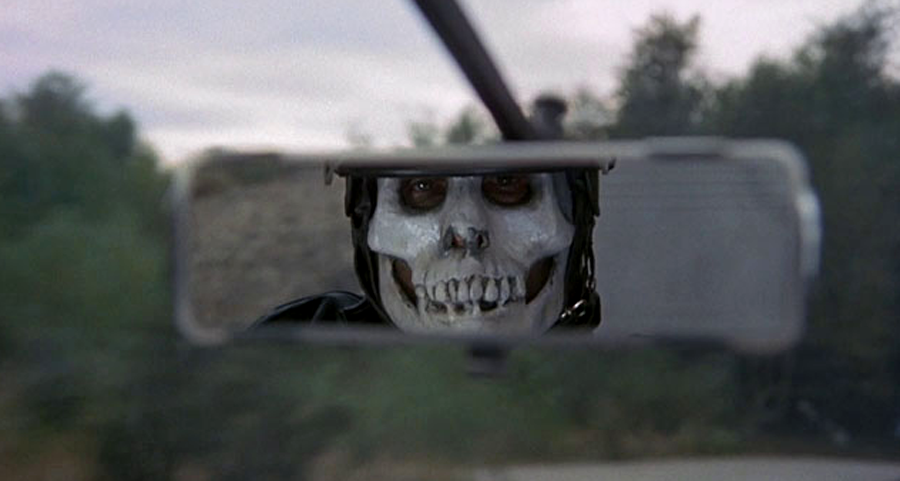 All five subjects seem utterly baffled by the creepy old guy’s stories. It’s then he reveals why they are all there, and the film wraps up in a quietly creepy—yet also baffling—manner. Tales From the Crypt the movie reinforces one of the themes so prevalent in the original comics–namely, if you’re bad, you’re gonna get it in the end. And while we’re still talking horror here, I found that when I first saw this film as a teenager (Crypt was one of the initial films I found when video stores started popping up in the early 1980s, and its comic book roots drove me right to it), it was reassuring in its way—all I had to do to stay out of Hell was not murder or abuse anyone so bad they kill themselves. That’s a can-do! 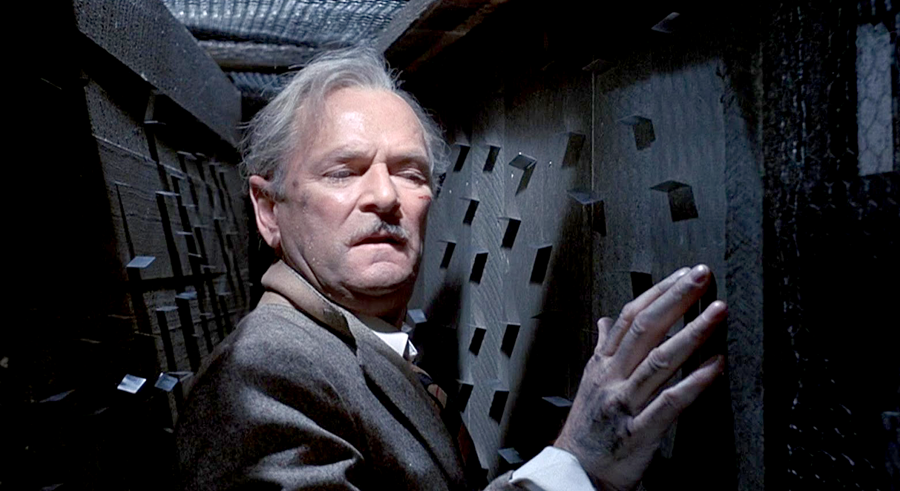 As is the case with most anthologies, Tales From the Crypt is hit and miss in varying degrees. “…And All Through The House” is tense and fun, a great example of the EC staff’s ghoulish sense of humor. The second story is probably the weakest, with the film rebounding with the third and fourth segments and tapering off a bit at the end. With five stories plus a wraparound in just 92 minutes, there’s a not a lot of downtime or subtlety—another trait right out of the original comics.

Tales From the Crypt was successful enough to inspire a side-quel, Vault of Horror. There was also a tie-in Crypt novel, which appears as a prop in the later film. Both movies have been released on DVD and, as you might imagine, make a killer (heh) double-feature around Halloween…or better yet, Christmas.

Decorate the tree, throw the eggnog out, and put Tales From the Crypt in your DVD player. Just make sure all your windows are locked.

Rob Kelly is a writer/artist/comics and film historian. He is the co-host of The Fire and Water Podcast (and the host of its sister show, The Film and Water Podcast), the co-creator and writer of the award-winning webcomic Ace Kilroy, and the creator of the book Hey Kids, Comics!: True-Life Tales From the Spinner Rack. His favorite Christmas present remains the Kenner Star Wars Death Star playset. You can read more of his REEL RETRO CINEMA columns here.