A Long Time Ago in a Licensing Galaxy Far, Far Away…

Like many kids my age in 1977, after I saw Star Wars my life was dedicated entirely to one thing: more Star Wars. Whether it was through toys, books, or even the (gulp) Holiday Special, anything that carried that now-iconic logo was enough for me: Mom, Dad, it’s Star Wars—gimme!

One area where Star Wars overlapped with an obsession already in place, of course, was in the world of comic books. As we know, Marvel acquired the rights to adapt the movie in the Mighty Marvel manner (“Lo, the Moons of Yavin!”) and turned it into a six-issue series that then kept going with new stories.

The six adaptation comics were such a hit that Marvel passed up no chance to reprint them: they went back for second printings for the standard edition, packaged them together in plastic bags as “Comic Paks,” did three treasury editions, plus a paperback book (there might even be a version carved on stone tablets, I’m still checking eBay). 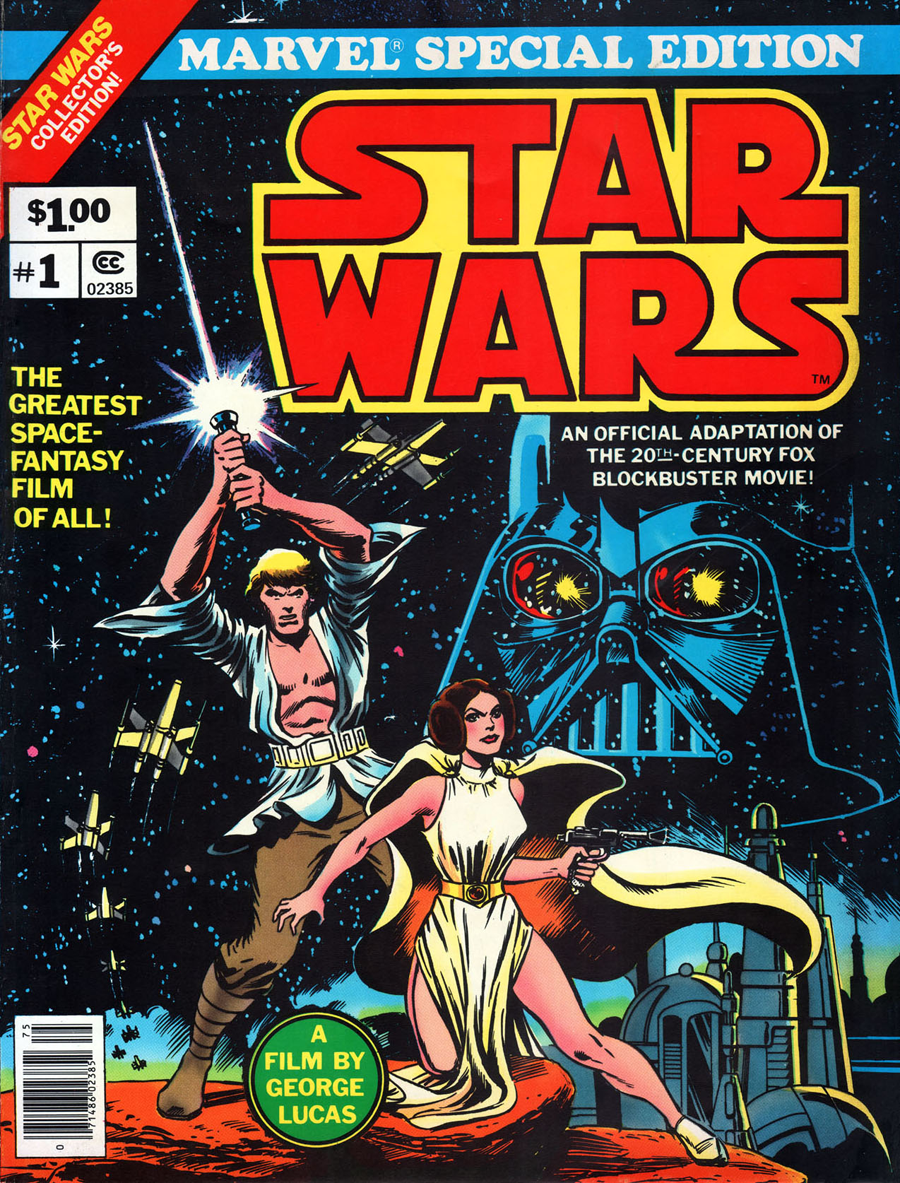 I, of course, bought those first issues of Star Wars as soon as I could get my hands on them. For those too young to remember, licensing was a very different affair than it is today. Nowadays licensors receive officially approved stock art of the various characters and logos for use on products, so everything has a uniform look and feel: If you own a property as valuable as Star Wars, you don’t want some cheapjack-looking version of Darth Vader drawn by Phil in Marketing next to your trademarked logo. You want it to look official.

And that brings us back to the comic-book adaptation. As was the style of the time, the creators of the comic (writer Roy Thomas and artist Howard Chaykin in this case) had only the screenplay and maybe a few stills to work from, since the film was still being shot as work on the comic commenced. As a kid of the 1970s, it made my head hurt that there were moments that bore little to no resemblance to the film I saw over and over (and over), but I just had to roll with the punches. With another chapter in the saga about to be written with Rogue One: A Star Wars Story, let’s go way, way back and take a look at some of the more Marvelous diversions from that galaxy far, far away… 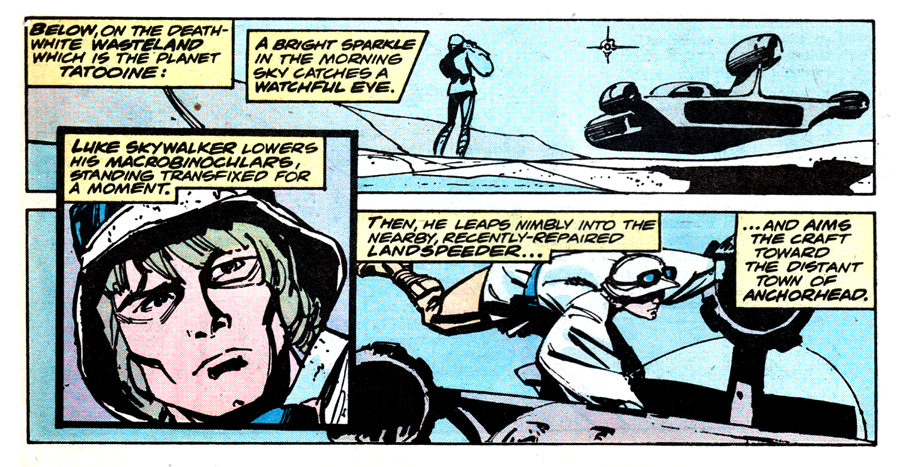 It doesn’t take long—Page 2, in fact—before Marvel’s Star Wars starts diverting from the movie. Here, we meet Luke Skywalker almost right away, as he watches the capture of Princess Leia’s ship by the Empire from his home planet. He hops into his land speeder and takes off. We’re back with Luke on Tatooine just a few pages later, where we meet his gearhead pals Biggs, Camie and Fixer. It’s Tatooinian Graffiti! Biggs and Luke have a heart-to-heart a few pages later, making the references to him that remained in the film (“Biggs is right, I’ll never get out of here!”) a lot more understandable. 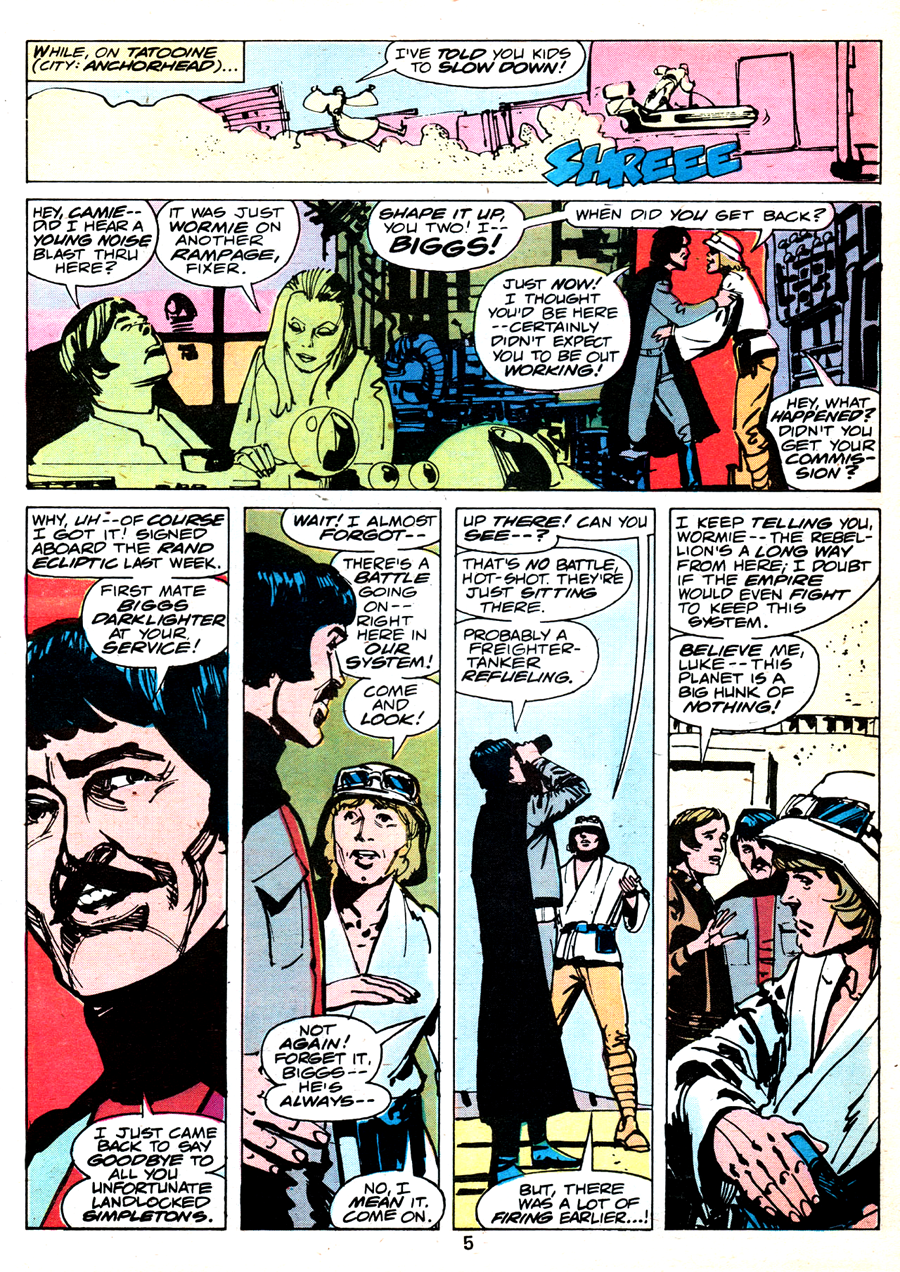 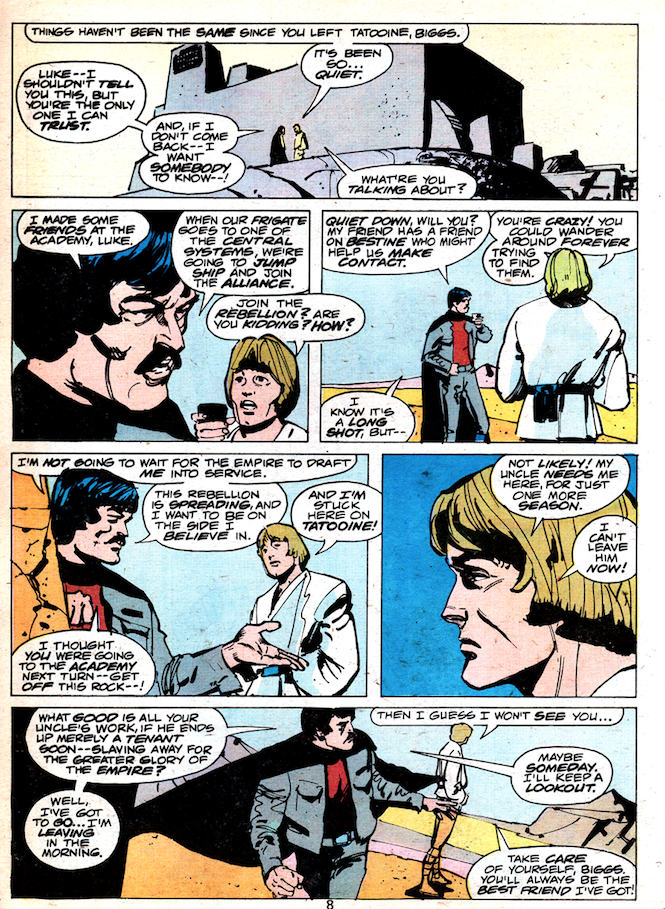 Sometimes the changes weren’t so glaring. When Princess Leia is about to be tortured by Pops Vader, the Big Floating Bowling Ball of Pain has been replaced by a more prosaic-looking green droid. Where’s that action figure? 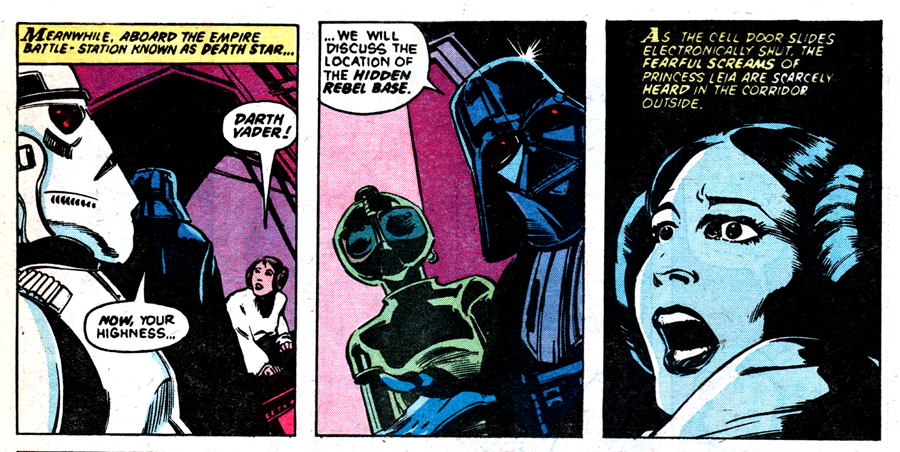 The biggest, most noticeable change, of course, takes place in Mos Eisley, when a mutton-chopped, green-skinned Jabba the Hutt accosts Han Solo. This Jabba would go on to make a second appearance in Marvel’s Star Wars series (Issue #28), in a story titled Whatever Happened to Jabba The Hutt? Indeed! 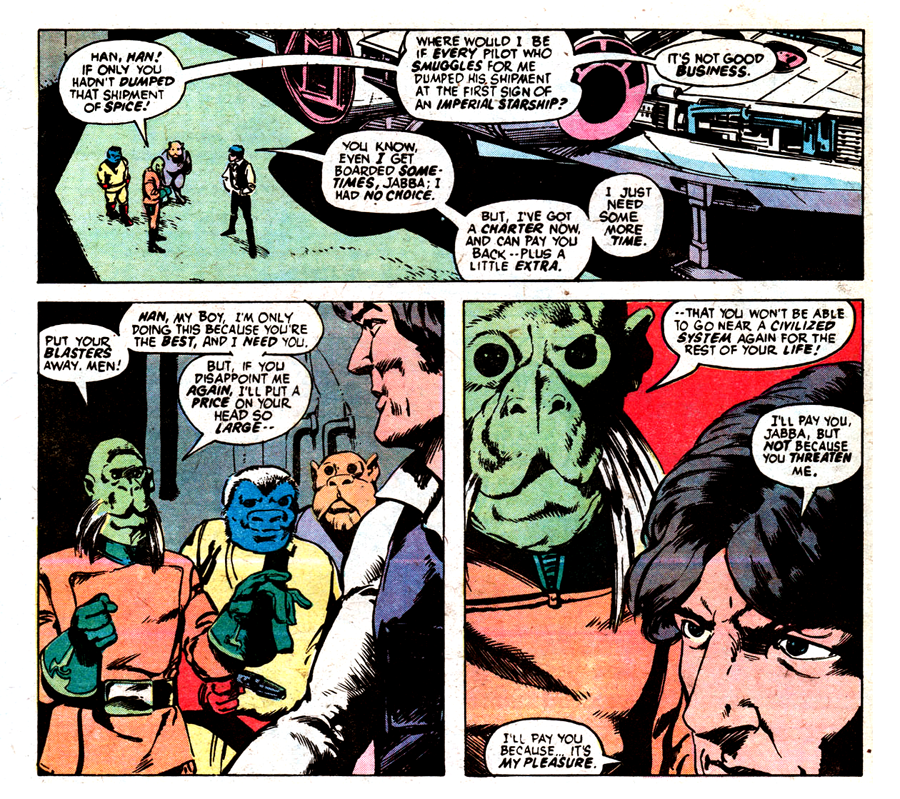 One of the things a screenplay-to-film comparison gives us is how absurdly trivial some of the alterations can be. When Luke and company are trapped in the Death Star trash compactor, we get a big fat close-up of the ID# that he barks to C3PO—and yet the number is different! I guess 366117891 just didn’t seem “spacey” enough?

Sometimes, even when there’s no change in dialogue or action, just how the events are portrayed can make a huge difference. In the film, Leia’s kiss to Luke before they swing across the chasm is clearly ceremonial—as she says, “for luck.” But when it came time to convey that moment in the comic, the future siblings’ closed eyes tell a different, slightly more romantic story.

Another major instance of this is when Vader and Ben Kenobi have their lightsaber duel. Even as a wee tyke, I understood by Ben’s actions that he was, for whatever reason, sacrificing himself intentionally. But in the comic, it looks a bit like Vader was one with the knockout. Zzrakk! 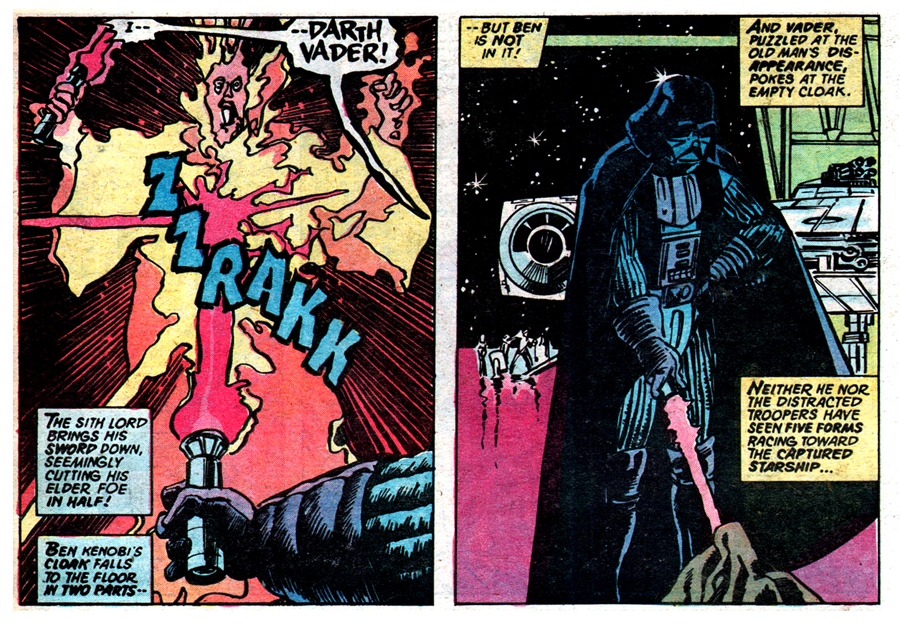 Luke and Leia share another kiss (plus a meaningful hand hold) just before the former climbs aboard his X-Wing during the final assault on the Death Star. Biggs makes a return appearance (complete with editor’s note—Rascally Rob) as well, suggesting that George Lucas decided to get to the action as fast as possible and not slow the finale down with a lot of character stuff. But after two unprompted smooches, one can hardly blame Luke for thinking his sister was totally into him. 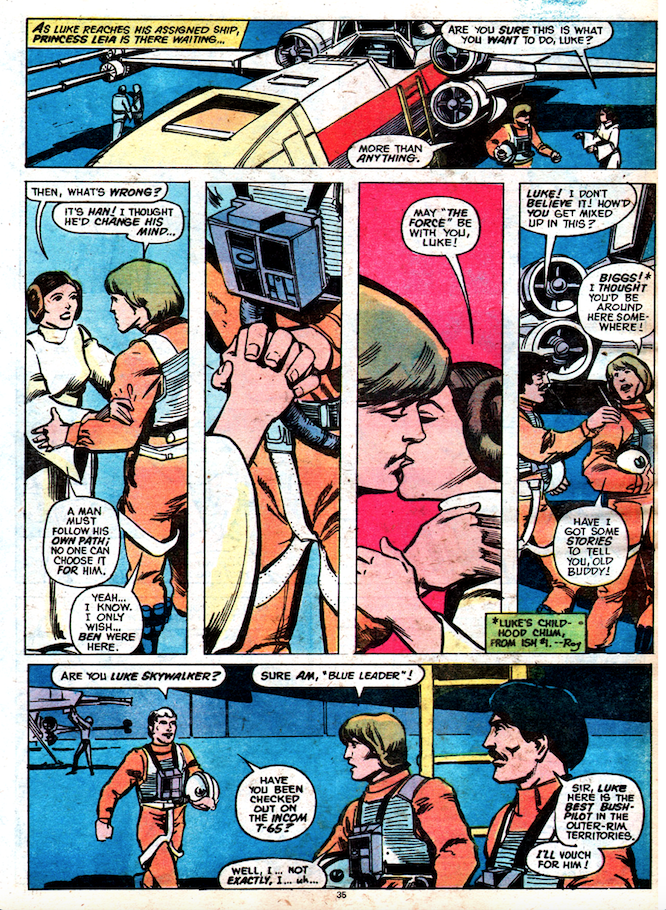 Finally, after the Death Star has been destroyed and Chewbacca is denied the medal due him, we get one last moment never hinted at in the finished film: Luke’s sense that Ben Kenobi is somehow present, observing the festivities. 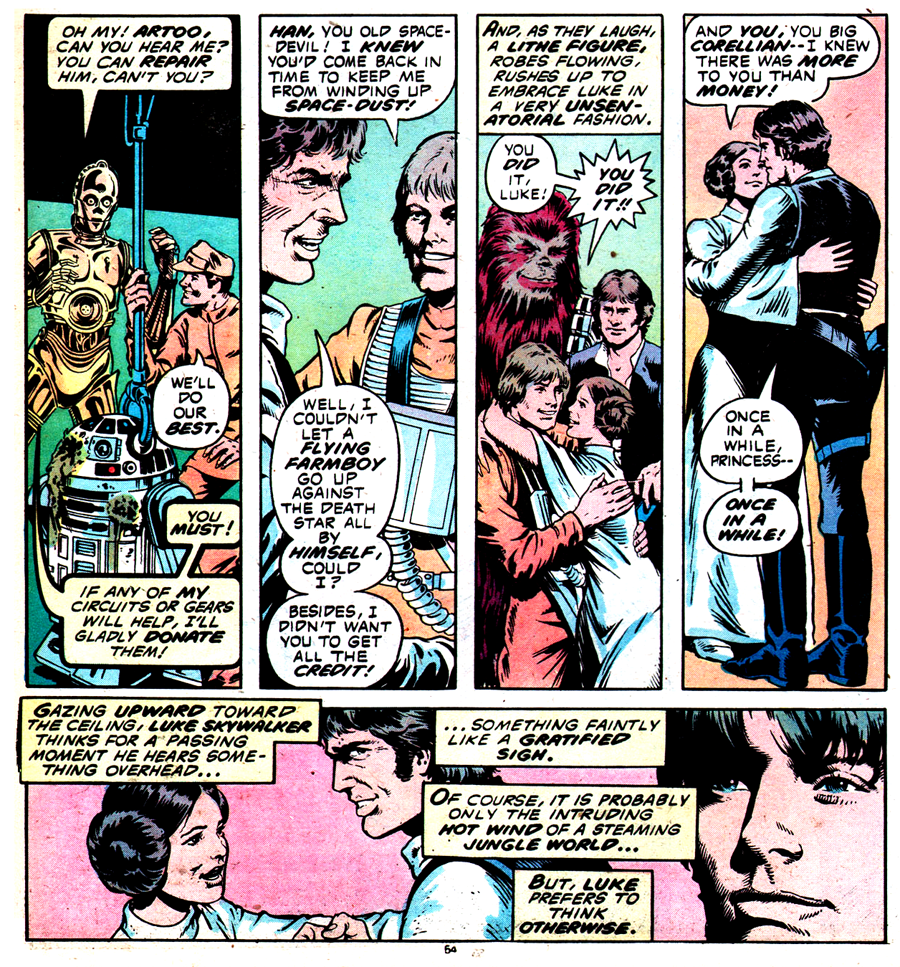 I certainly (new) hope that this list of discrepancies between Star Wars the film and Star Wars the comic is taken in the spirit it is intended—not as criticism, or mocking, but as a fun celebration of just how big this universe is. Sure, these changes were baffling to my young mind, but I ate up every little new or different morsel, no matter how inconsequential, when it came to Star Wars.

Even when it conflicted with what I saw in the film, it helped expand the universe in my mind, making it bigger, weirder, more interesting. I was one of millions who kept their personal Star Wars flame alive thanks to Marvel and its continuing, post-movie adventures of Luke, Leia, Han and the rest, and I wouldn’t trade a single moment—no matter how baffling—for all the blue milk in the world.

Rob Kelly is a writer/artist/comics and film historian. He is the co-host of The Fire and Water Podcast (and the host of its sister show, The Film and Water Podcast), the co-creator and writer of the award-winning webcomic Ace Kilroy, and the creator of the book Hey Kids, Comics!: True-Life Tales From the Spinner Rack. He wouldn’t trade his Doctor Strange Marvel Treasury Edition for anything. He wants a mutton-chopped, green-skinned Jabba the Hutt action figure for Christmas.