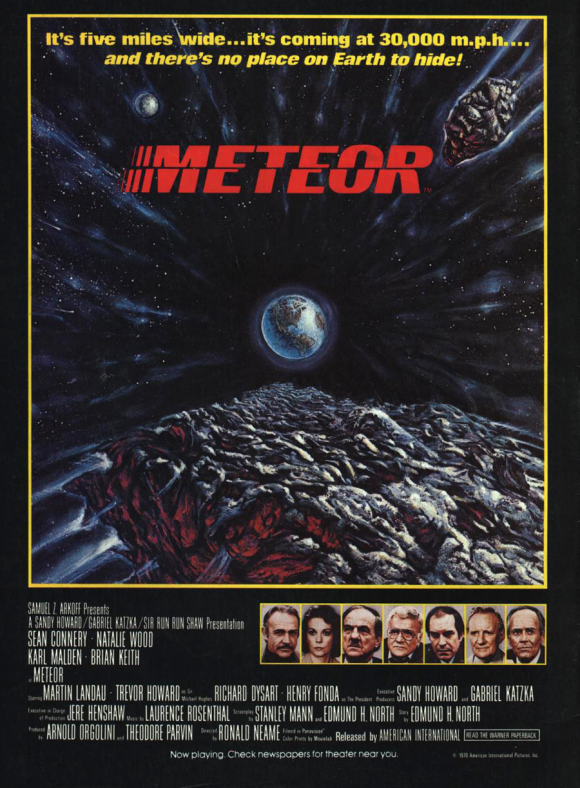 There’s a block of cheese five miles wide, and it’s headed towards Earth!

After a comet hits the asteroid Orpheus, a massive chunk splits off and ends up on a collision course with our planet. The United States government has a defense system in place, called Hercules, designed by renowned scientist Paul Bradley (Sean Connery, having run out of Bond money). Unfortunately, over the last few years Bradley was let go and Hercules’ mission was changed from being the coolest version of Asteroids ever to simply being yet another super weapon aimed at Russia. Now that there actually is an asteroid headed for Earth, its 14 nuclear missiles are not sufficient to stave off the “extinction-level event” that will occur if the rock makes contact.

The President (Henry Fonda, who else?) goes on TV and explains the looming threat, and the existence of Hercules, hoping this will lead Russia to admit that they, too, have a similar super weapon. Dr. Bradley is pressed back into service and he requests to meet with Russia’s top scientist, Dr. Alexei Dubov (Brian Keith). Dubov heads to the States, alongside his comely interpreter Tatiana Donskaya (Natalie Wood). They, Bradley, and NASA’s Harry Sherwood (Karl Malden) meet in Hercules’ control center, located under Broadway in Lower Manhattan (!). The facility is run by Maj. General Adlon (Martin Landau, rounding out the film’s Love Boat-y cast), who is super-duper True Blue American and doesn’t take too well to having these Russkies in his top-secret underground base. Can the two world super powers work together in time to stop Orpheus from destroying all life on Earth?

Meteor, produced by the notoriously cash-strapped American International Pictures and the legendary Shaw Brothers and directed by Ronald Neame, came at the tail end of the “disaster movie” craze of the 1970s. Neame had a number of good films to his credit, including 1972’s The Poseidon Adventure, which showed that the guy knew how to handle large casts and special effects spectacle.

After all the pieces are put in place, and the film should really kick into gear, its at this moment Meteor decides to slow waaaaaay down by spending most of its middle third on endless scenes of all these high-priced actors standing around talking, joking, and arguing. Dr. Dubov doesn’t speak English, leading to several moments where everyone has to watch him talk, then wait for Tatiana to translate, then watch Dr. Bradley respond, then watch Tatiana translate back. Bradley and Tatiana have time to flirt with one another. Gen. Adlon wastes everyone’s time arguing with decisions that have already been made (Landau’s final scene, where he screams at everyone for several minutes, practically ends with him having pieces of the set dribbling out of his mouth). No one seems like they’re in a particular hurry, which is an odd choice considering there’s a five-mile-wide chunk of space rock on its way to exterminate all life on Earth.

There are a few special effects shots, but thanks to AIP’s shallow coffers, they are laughably bad. Maybe in the early 1970s they might have gotten by, but in 1979 audiences were just not going to settle — Meteor had the unfortunate timing to come out after Star Wars, which ramped up audiences’ expectations for sci-fi action.

The final set piece, after Manhattan gets hit by a piece of the meteor and our heroes are trapped in the subway as water pours in, is impressive, sort of. As you watch it, you find yourself grimly admiring all these poor actors who had to get all this brown goop dumped on them for however many days it took to shoot it (I can only imagine how cranky Connery, not known for being easy to get along with on the best days, must have been). The film ends with a large chunk of Manhattan destroyed, but in the final scene our characters are all smiles. Meteor 2, anyone?

The answer to that, of course, was no. Meteor was reviled by critics and a, er, disaster at the box office. It is routinely blamed for helping bring down AIP, but some movies tend to get the stink of failure on them and are pegged for everything bad that happens afterward, so your mileage may vary.

One company that didn’t seem to suffer much ill effect from its connection to Meteor was Marvel Comics, which produced a full-color adaptation of the movie for Marvel Comics Super Special #14 (Fall 1979). Written by Ralph Macchio with art and painted colors by Gene Colan and Tom Palmer (the same team that brought you the Jaws 2 adaptation a few issues earlier), this 36-page comic works much better than the film. 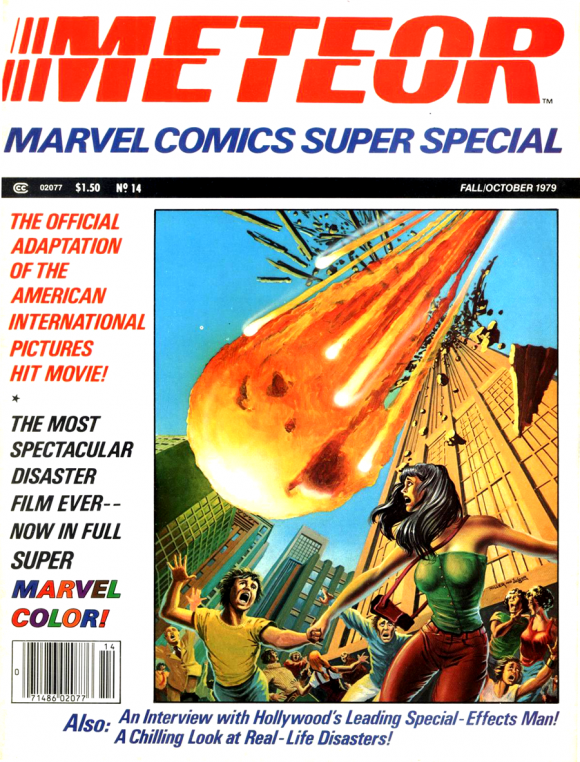 Macchio wisely drops all the jibber-jabber that ate up so much screen time, and focuses on the action beats. Not limited by budget, Colan and Palmer let it rip, giving us a number of scenes of breathtaking action in the Mighty Marvel Manner.

Meteor (the comic) is no masterpiece of course, but you can see the basic pulpy elements of a story that might make one think this could make for a crackerjack movie. They just didn’t make that movie. 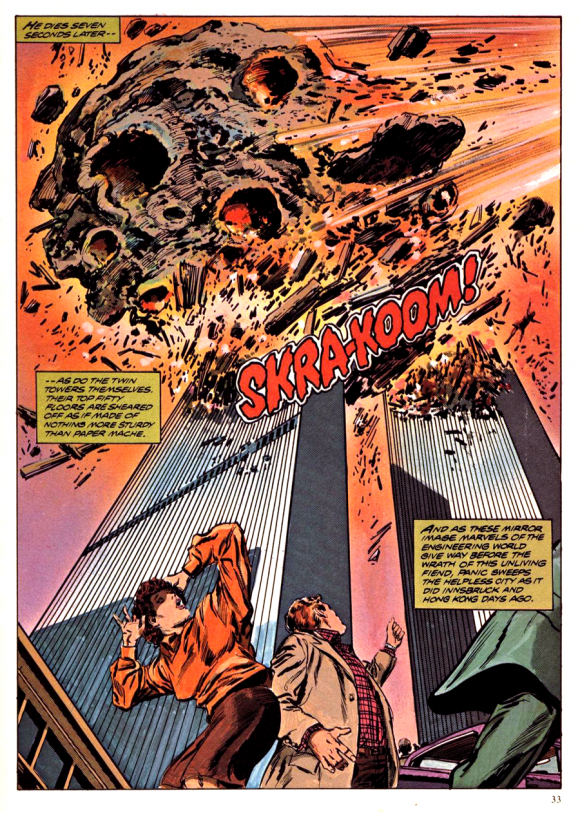 Is Meteor worth tracking down? Not really. Even at less than two hours, the film drags and it’s hard to stay interested as it plods along. As a fan of Old Hollywood, it is fun watching all these movie stars (most of whom are, sadly, no longer with us) interact, even if they all end up covered in mud. Watching Meteor also had me reflecting how quickly the disaster film genre sputtered to a conclusion—a genre that once seemed as durable as superhero movies do now.

If, for some reason, you are dying to see this story, skip the movie and pick up the Marvel adaptation instead: Never has destruction looked so pretty. 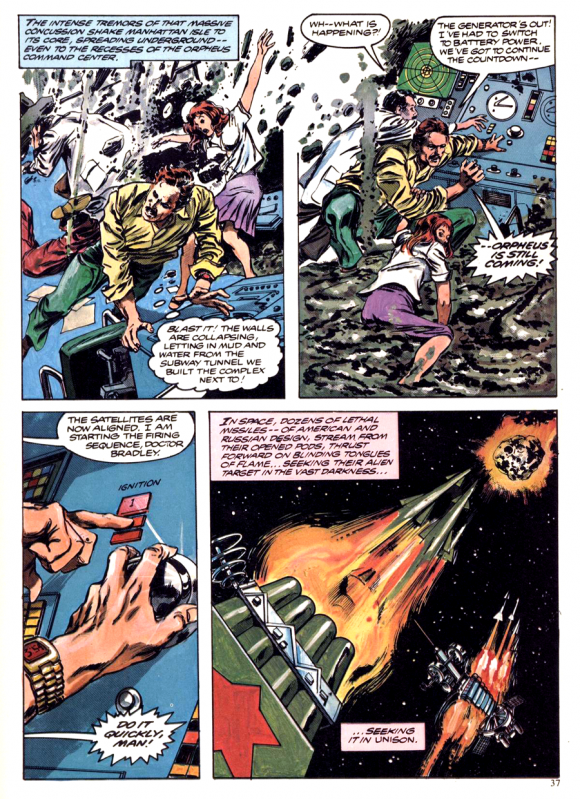 Rob Kelly is a writer/artist/comics and film historian. He is the co-host of The Fire and Water Podcast (and the host of its sister show, The Film and Water Podcast), the co-creator and writer of the award-winning webcomic Ace Kilroy, and the creator of the book Hey Kids, Comics!: True-Life Tales From the Spinner Rack. He misses those old-timey movie posters that feature the heads of all the actors.