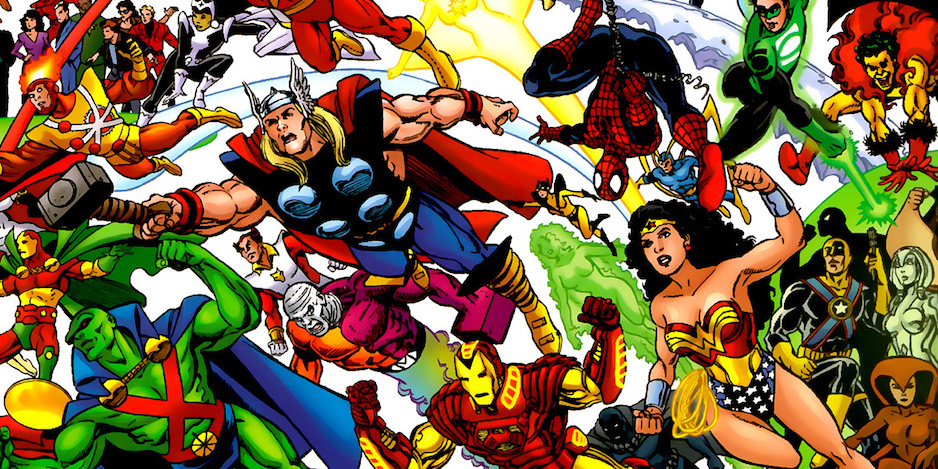 UPDATED 5/7/22: The great George Perez has died at the age of 67. This ran in April in celebration of Perez’s life. We re-present it here. Click here for our complete index of Perez features. — Dan

The first time I saw George Pérez’s art, I thought he had to be crazy.

It was, if I remember correctly, an episode of the Sons of the Tiger by Bill Mantlo, George, and Jack Abel being serialized in The Deadly Hands of Kung Fu #21 in the mid-1970s. This guy was jamming everything into those pages. Sure, these were oversized magazine pages, but he was filling them with 10, 12, 14 panels each. There’s an 18-panel page that he pulled off without a single cheat, like repeating images or using all close-ups instead of mixing them up with medium and full shots. 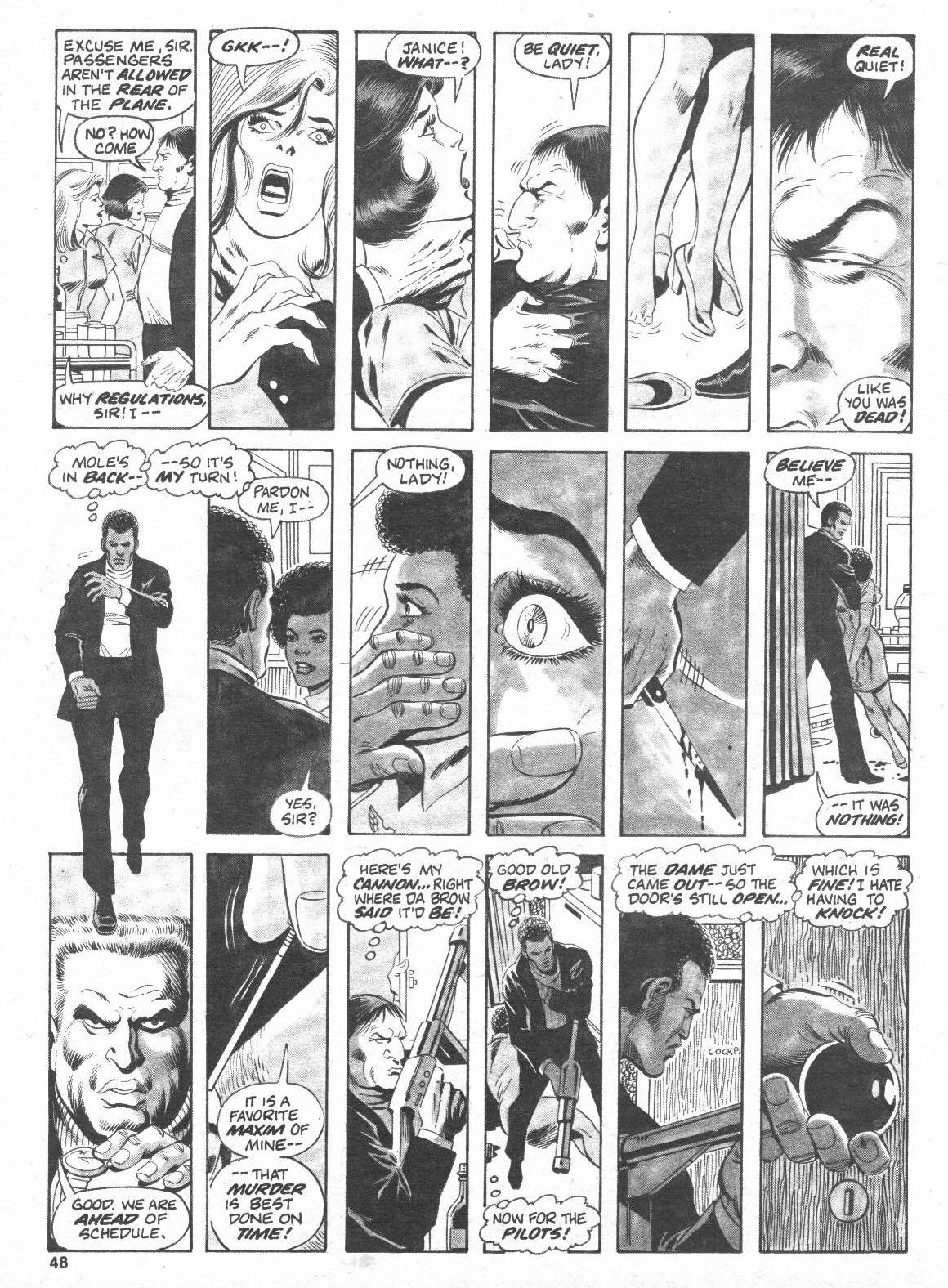 But it was the splash panel of that story that got me (see below). Who lays out a shot like that for themselves? Who draws every single detail of every single building, including all those windows?

The answer was George Pérez, the talented newcomer who had begun his career just three years earlier, assisting artist Rich Buckler on Deathlok. George went from there to the Sons of the Tiger feature and, not too long after that — with a few stops along the way on Man-Wolf and Fantastic Four — to his star-making turn on The Avengers. But it took DC’s New Teen Titans with writer Marv Wolfman and inker Romeo Tanghal to make George’s star go nova, a feat followed by the historic Crisis on Infinite Earths and a more than five-year run writing and/or pencilling Wonder Woman.

And then, of course, there is that other historic event, the mammoth DC and Marvel crossover event, JLA/Avengers, whose recent reprint broke the internet. 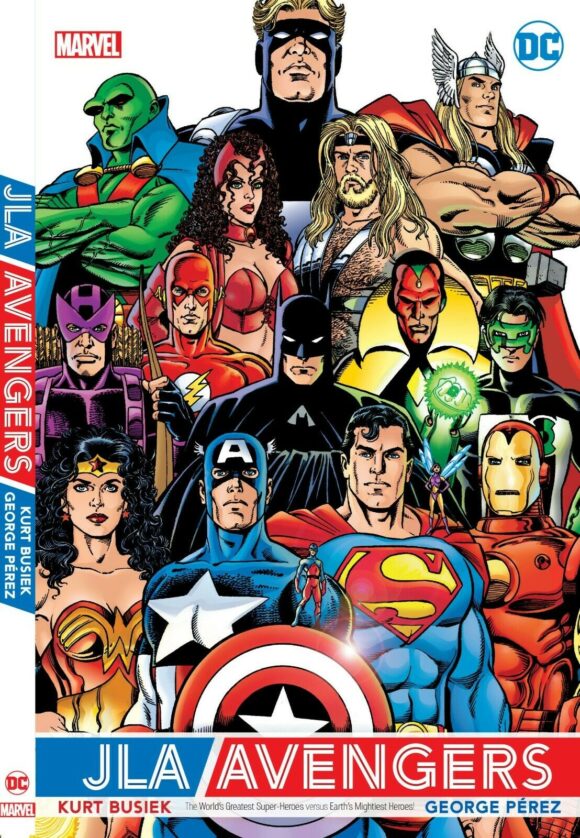 Do you see the common thread running through these titles?

They’re group books, featuring a gazillion characters and co-stars each. Some artists hate drawing group books; some, like George, can’t seem to do anything else. George was like a modern-day Dick Dillin, an artist who devoted 30 years of his career to two team titles, Blackhawk and Justice League of America. JLA editor Julie Schwartz told me Dillin never once complained about the crowd scenes, but I wouldn’t be surprised if George asked to include even more characters! (Note from Dan: He did!)

But it’s not just crowds. It’s large numbers of anything. A giant comic book machine? George would draw every nut and bolt and number on the power gauges. A scene of destruction? George delineated each and every rock in a pile of rubble and all the shattered windows around them. He was a superb artist and the master of detail. I don’t have to tell you what George Pérez has meant to the comic book business, his colleagues and co-creators, and, most importantly to George, I think, his fans.

And in the end, it turned out I was right. George Pérez was crazy! Crazy good! 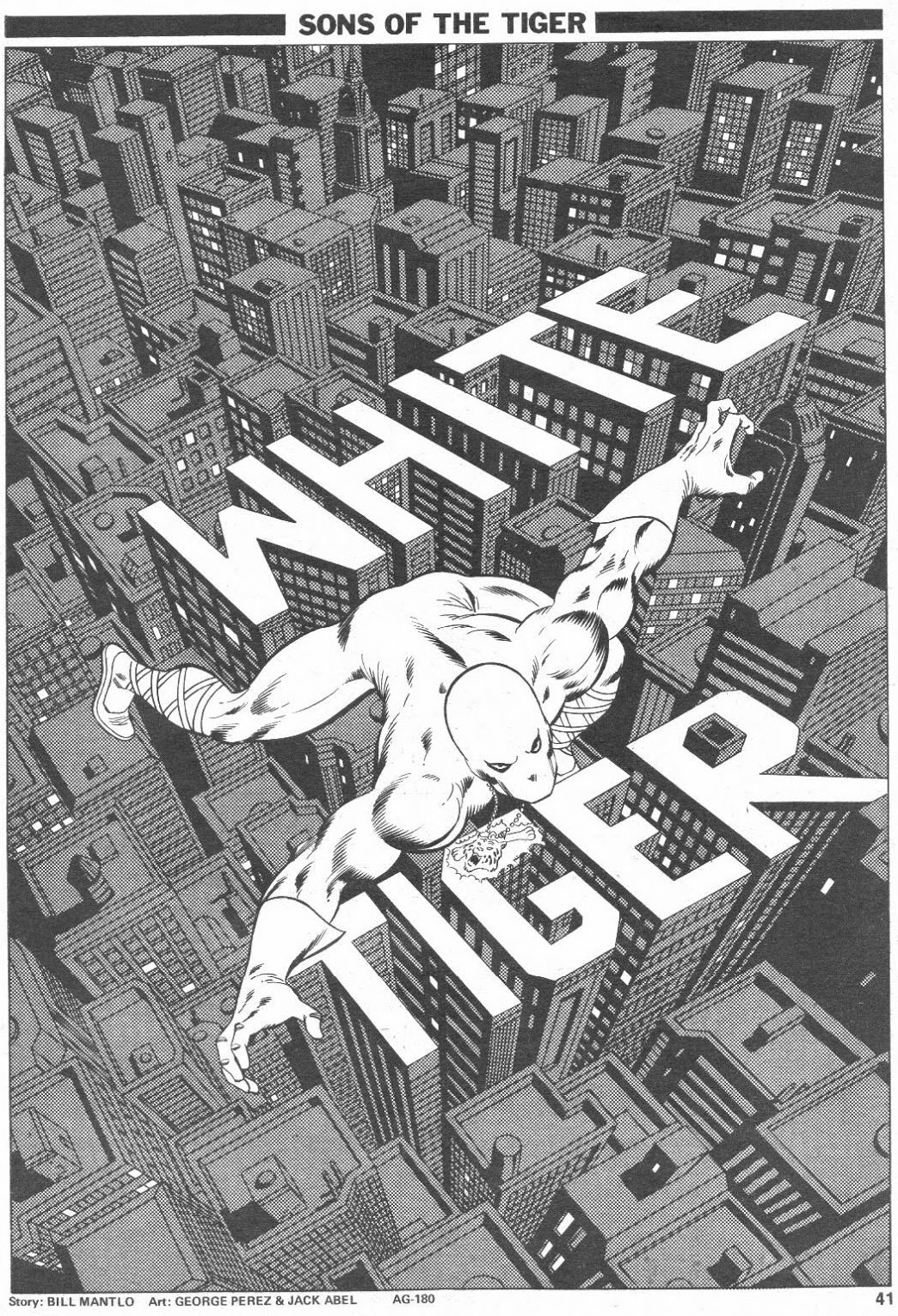 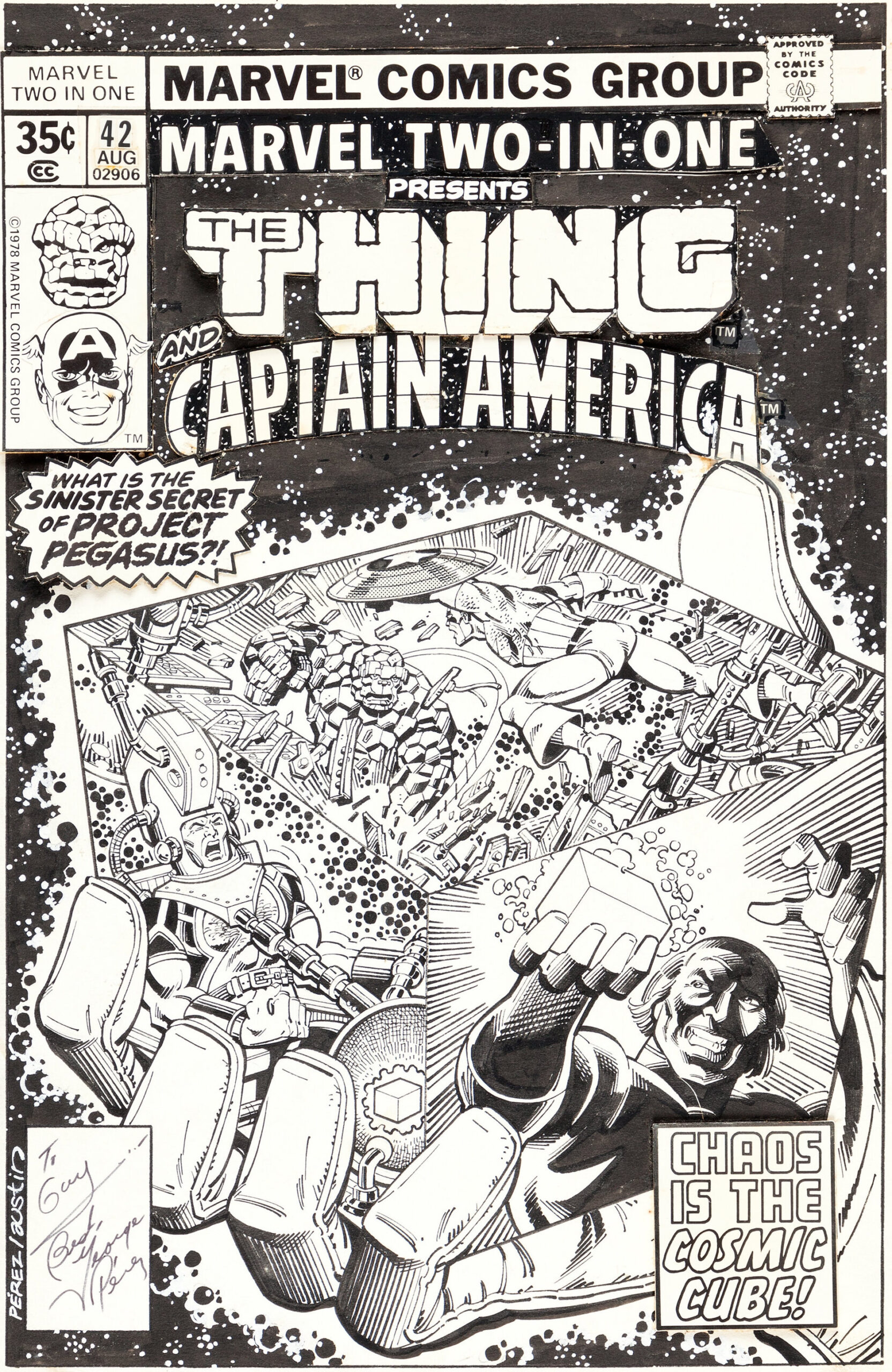 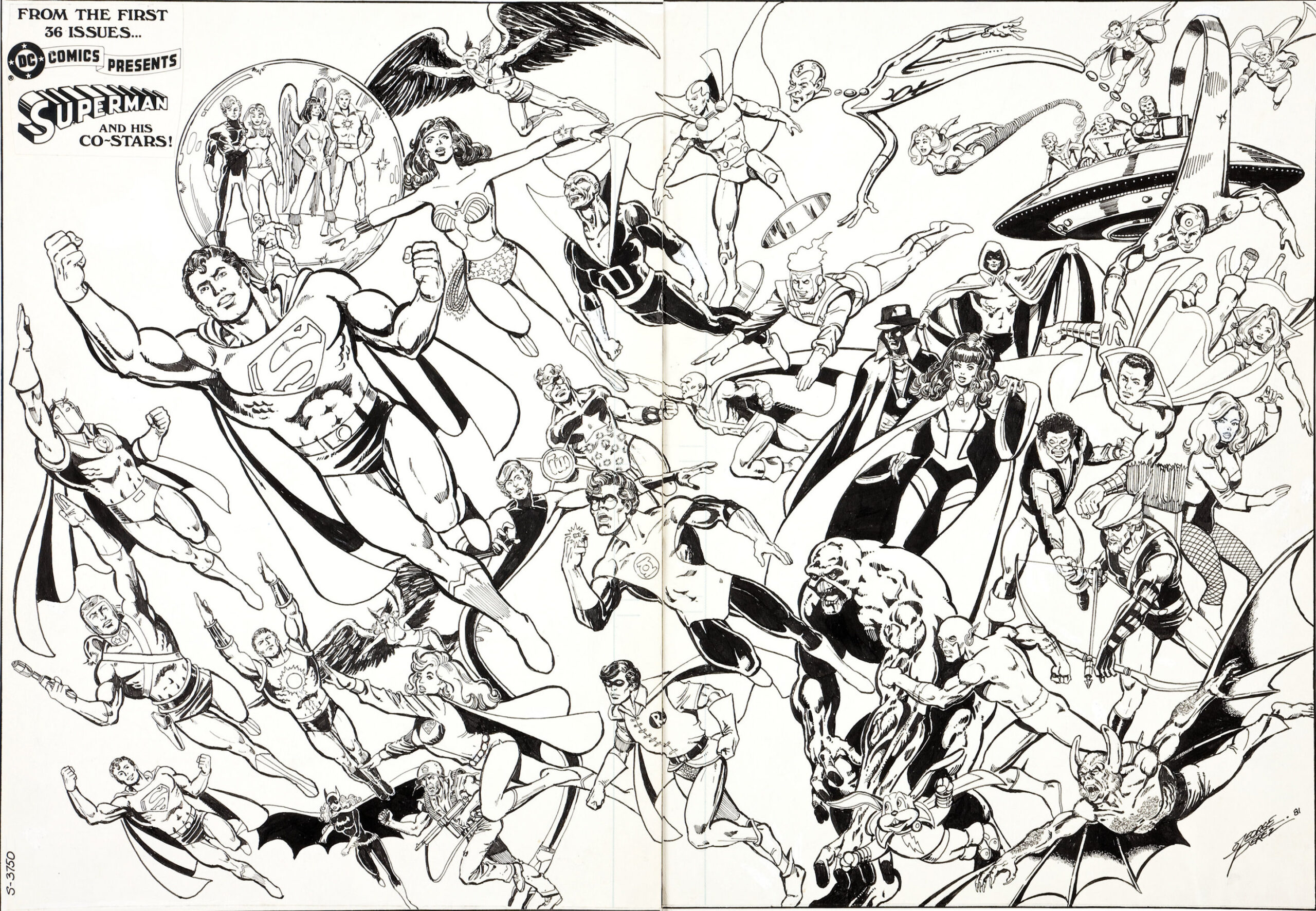 The New Teen Titans #15 (Jan. 1982). This one’s got it all! Loads of characters! Lots of beautifully rendered debris! And Kirby Krackle! 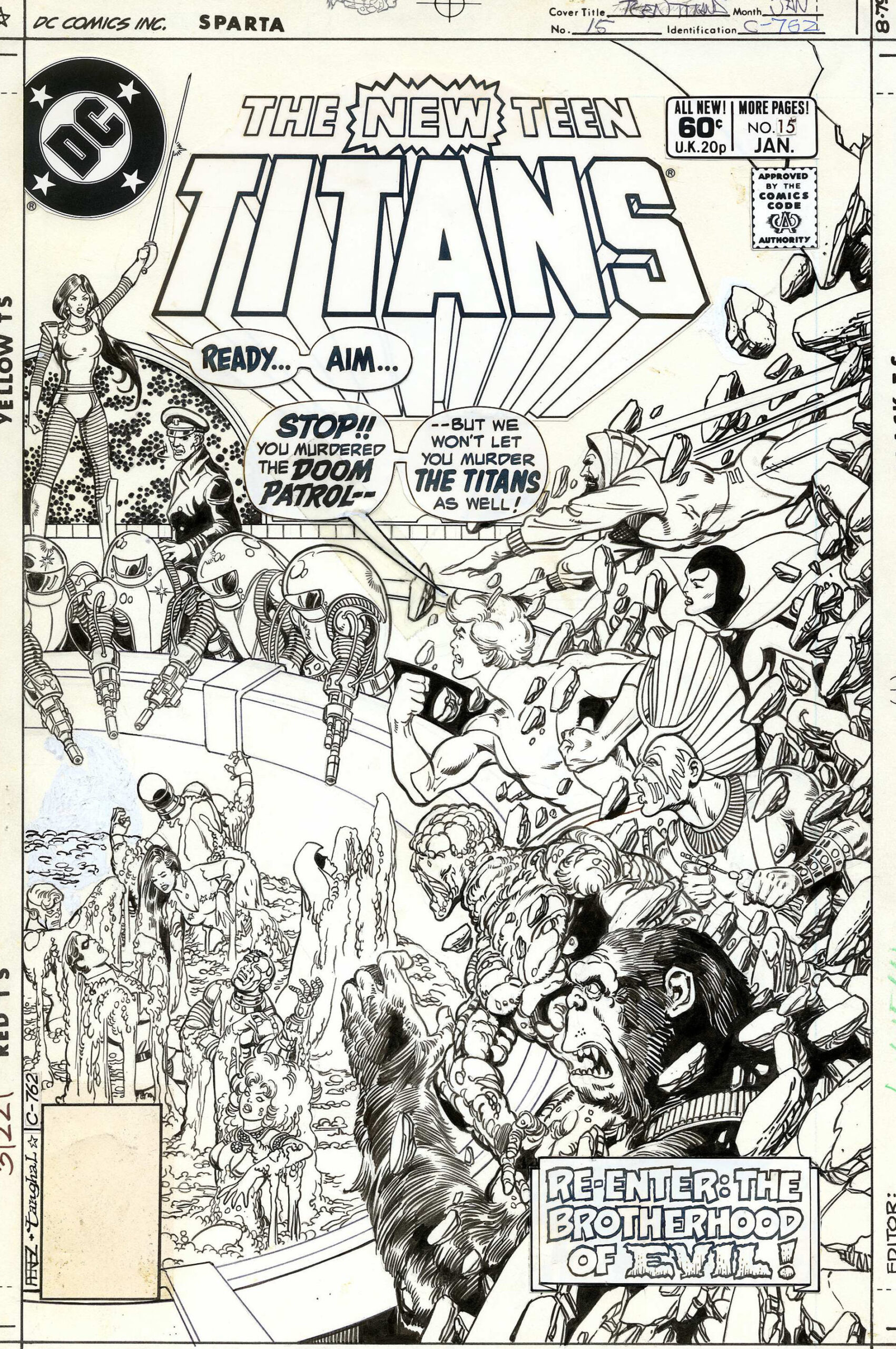 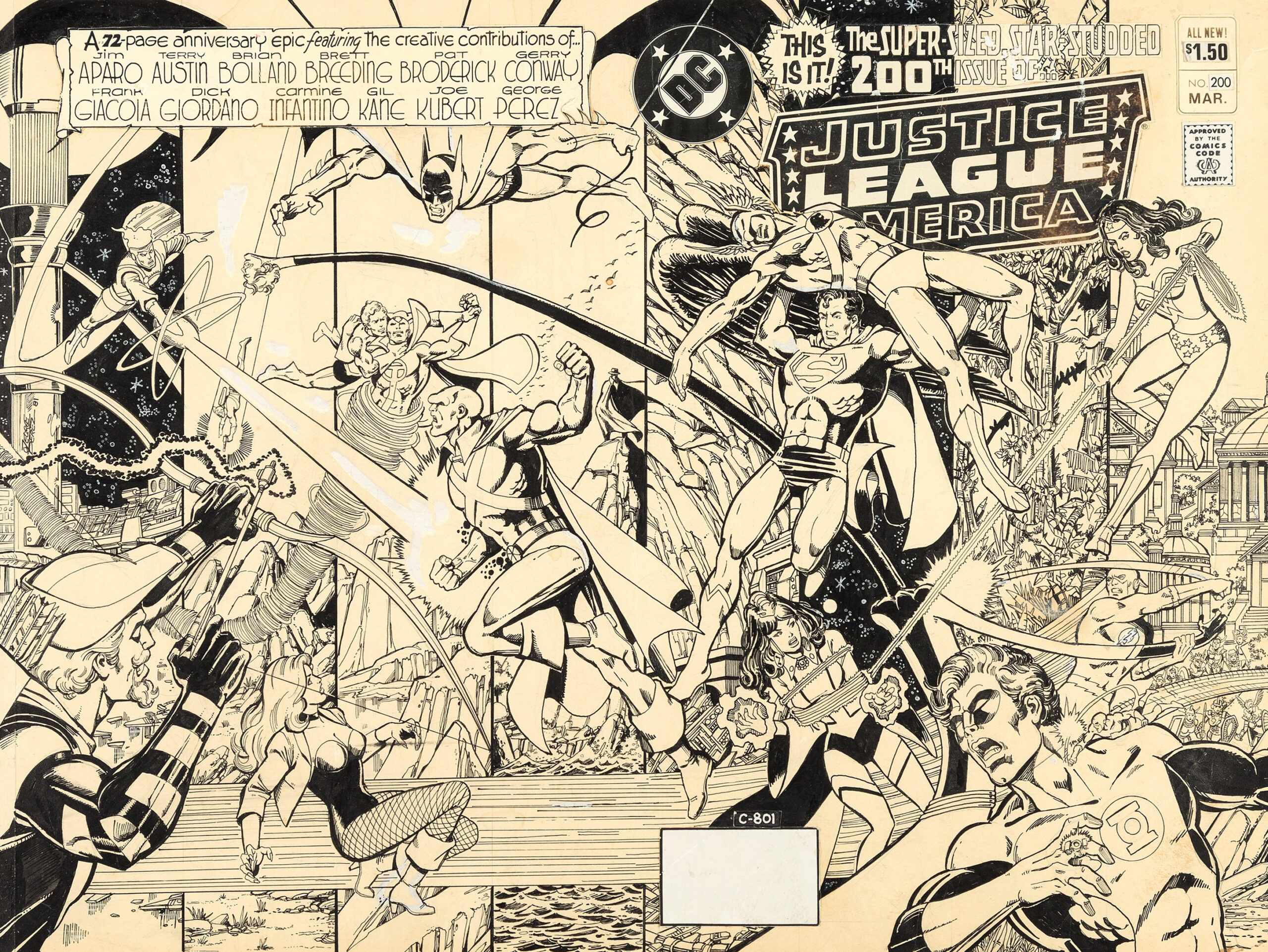 World’s Finest #278 (April 1982). I never worked directly with George, but I did have a few stories in comics for which he did the covers, as with this issue’s Zatanna back-up “Dog Day Afternoon” I wrote, drawn by Dan Spiegle. Kind of sparse on the bodies, but the background is classic detailed Pérez, here inked by Tanghal. 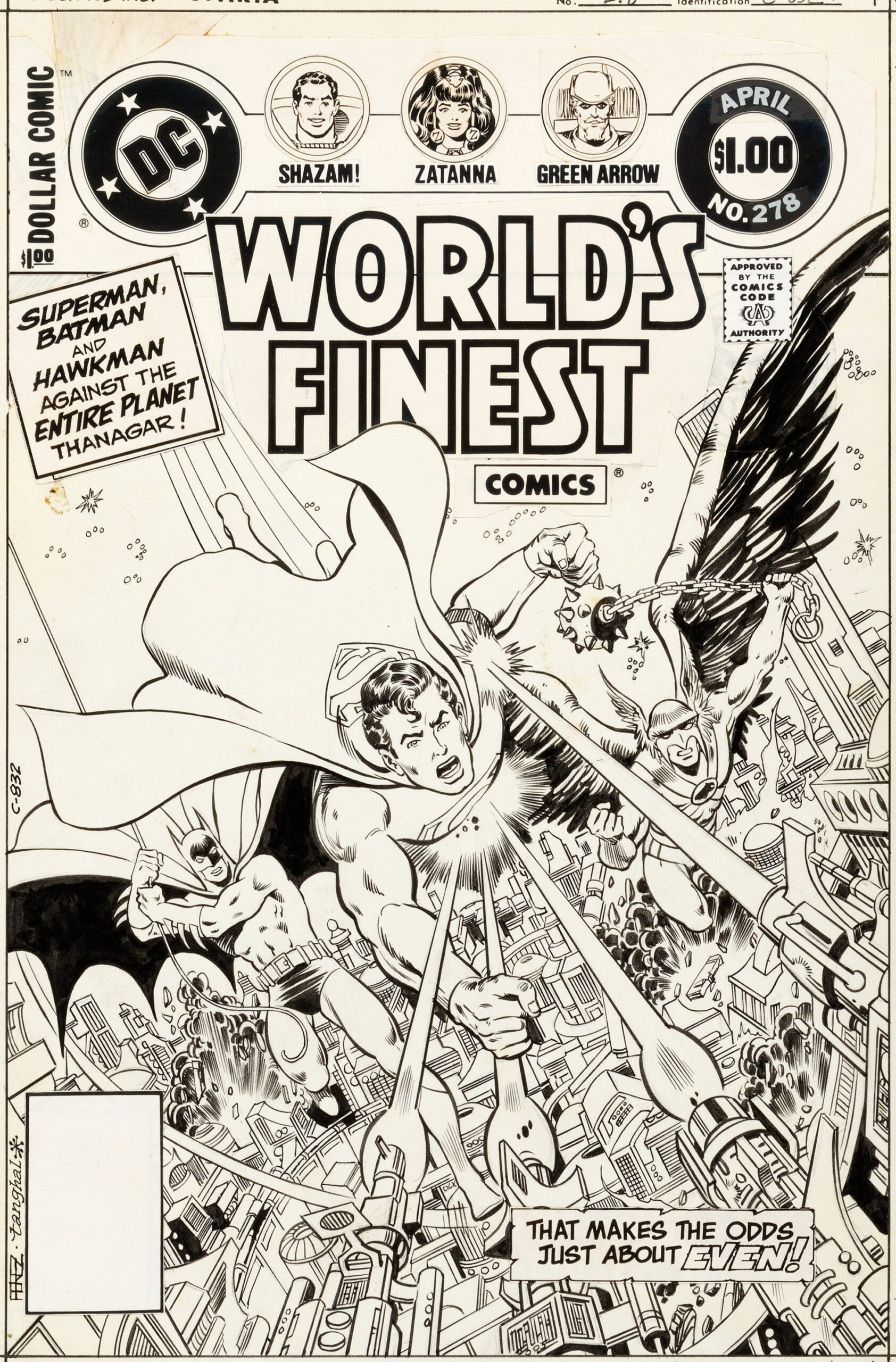 Justice League of America #217 (August 1983). Another gang shot and another cover for a story of mine, “All the Elements of Disaster!” with Chuck Patton and Tanghal. Both George’s cover and my story were inventory pieces and had nothing to do with one another, but this shot has appeared frequently on DC license products over the years, especially T-shirts. 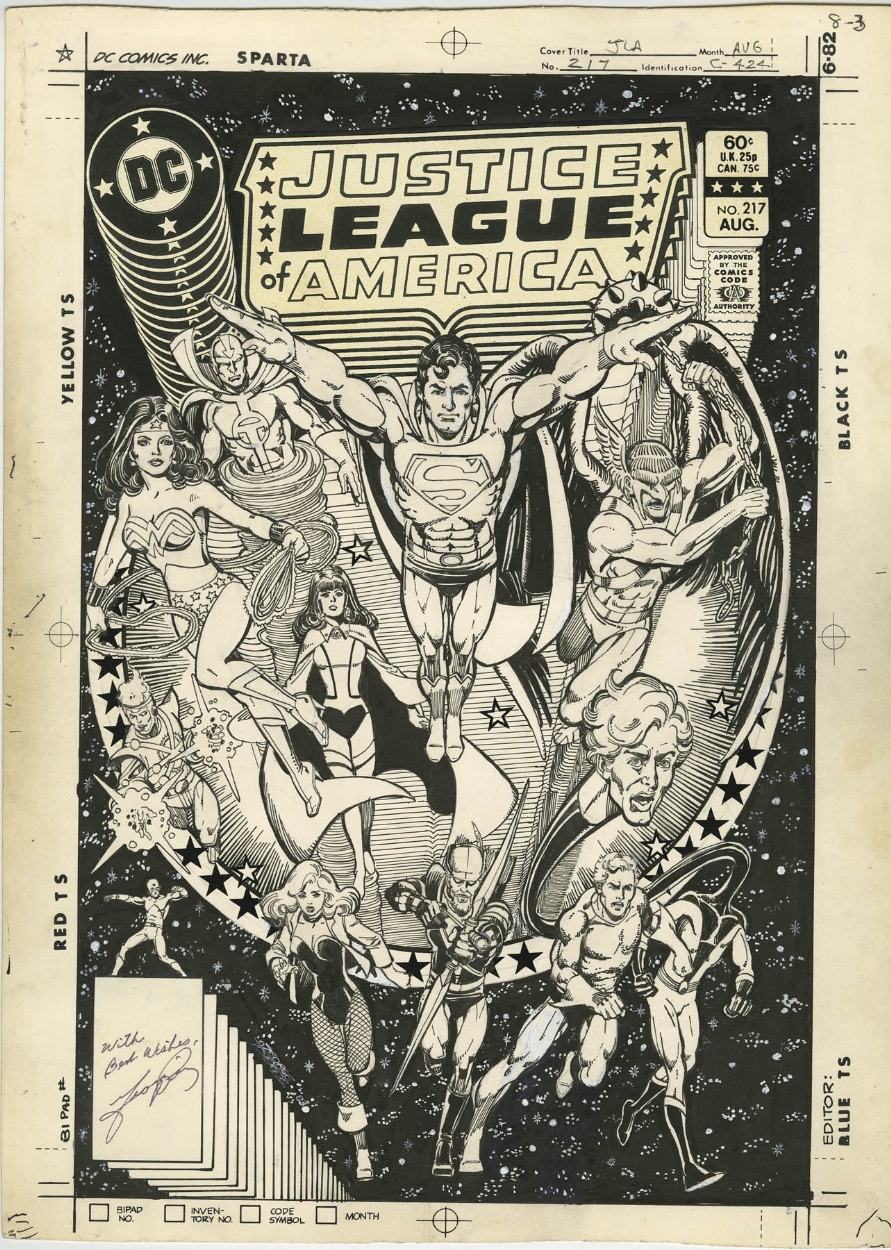 Star Trek #1 (February 1984). Maybe a final frontier for the gang on the Enterprise, but another day at the drawing board for George as he makes this static group shot appear to jump off the page at the reader at warp speed. 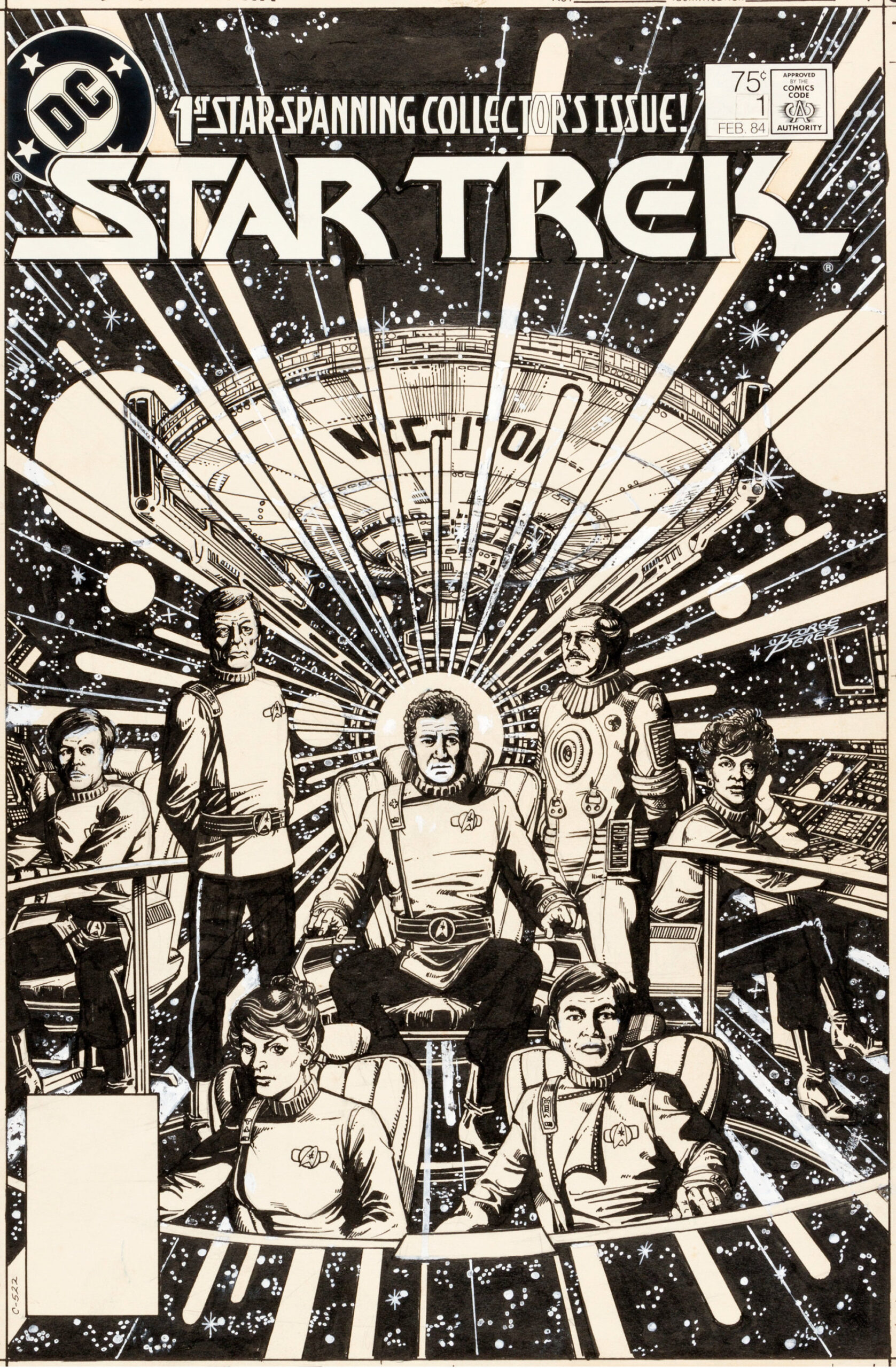 The Legion of Superheroes. I’m too lazy to deep-dive research for the date of this poster, but… jinkies!! (Note from Dan: So I did it for him! It’s a spread from Final Crisis: Legion of 3 Worlds.) 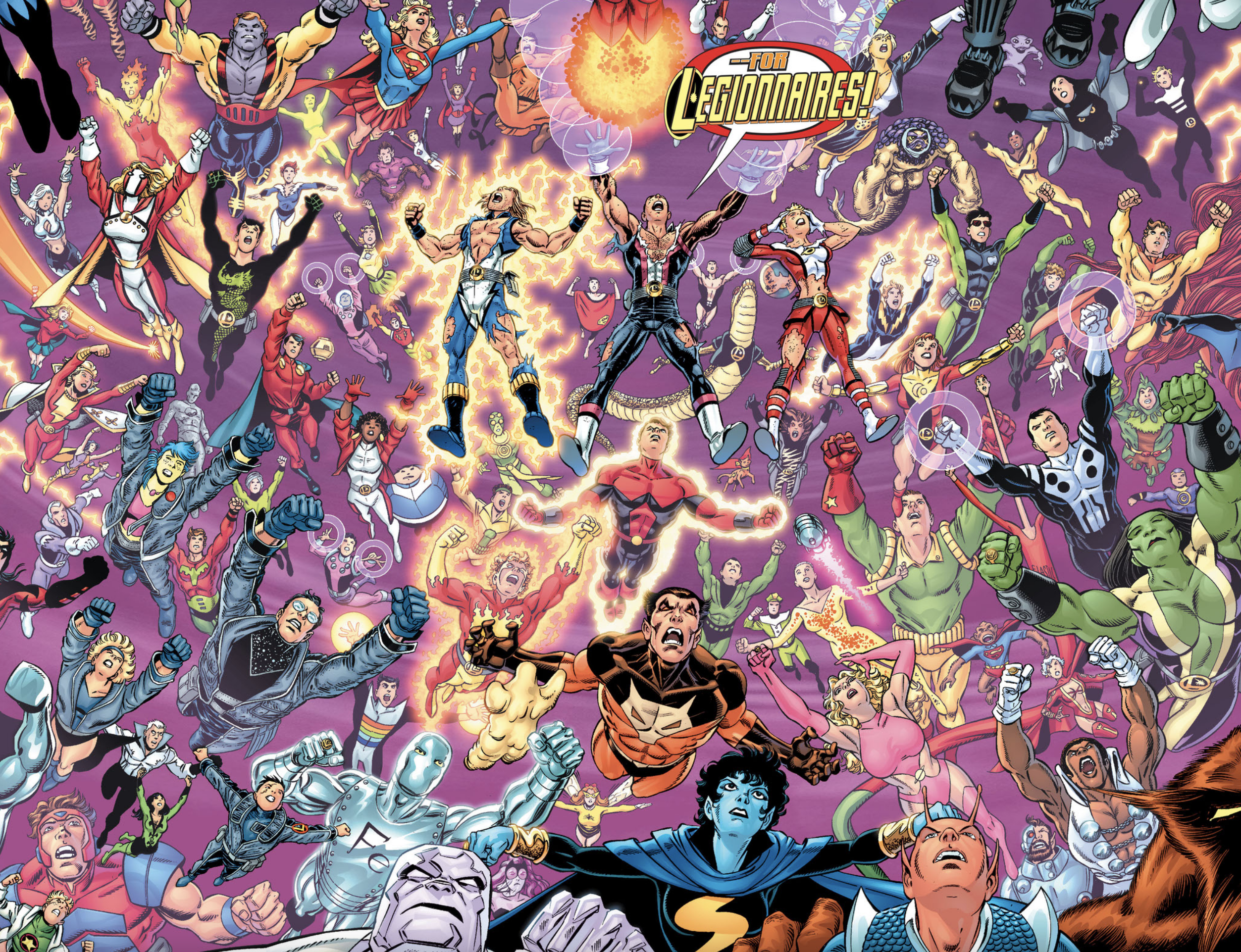 Avengers/JLA (2022). When Pérez says the gang’s all here, he means the gang is all here! — The GEORGE PEREZ INTERVIEWS: The Master in His Own Words. Click here.