The celebrated Mr. K takes you on a tour of the cracked-mirror world of the world’s greatest supermarket tabloid…

The greatest job I never had was executive editor of the Weekly World News, the late, lamented black-and-white supermarket tabloid that barked its outlandish headlines and stories at you while you were buying your bread and milk. I even used to do dramatic readings from the paper for my colleagues at a much more sober publication, much to their spastic glee.

Alas, I was not fated to work for them. But our columnist Paul Kupperberg did! And not just that, he has a new novel inspired by the mag’s fun-house version of bizarre unreality.

I wrote for and/or was executive editor for a little over two years for the legendary Weekly World News, which billed itself as “the world’s only reliable newspaper.” And it was. Readers could rely on just about every word printed—except for the trivia column, the indicia, and the recommendation in 6-point type at the bottom of Page 2 that “the reader should suspend belief for the sake of enjoyment”—to be made up.

The News hadn’t always been a satirical fake news tabloid. At its birth in 1979 it was more an amalgamation of stories about the weird and supernatural clipped from newspapers around the world, launched only so the publisher could continue making use of a black and white press after its flagship publication, The National Enquirer, switched to color printing. Sal Ivone, a founding News editor, once famously said, “If someone calls me up and says their toaster is talking to them, I don’t refer them to professional help, I say, ‘Put the toaster on the phone.’”

The trick to a really good Weekly World News story was verisimilitude, that little bit of relatable truth that draws in the reader and makes them believe, if only for an instant, that this could be true. It was the News, in fact, that “reported” the very first “Elvis sighting,” a wish-fulfillment fantasy for every Presley fan that became a worldwide craze.

Another early News editor and one-time Esquire editor-in-chief, Iain Calder once said, “We’d say Elvis was still alive and run a picture of what Elvis would have looked like at that time. We’d get dozens of phone calls. If someone calls and says, ‘I saw Elvis,’ you didn’t try to disprove the headline.”

I must have written close to a hundred bylined articles for the News, as well as likely a hundred more that I didn’t keep records of under the aliases of the many “columnists” that filled the paper, most of which were written while I was on staff from February 2006 to August 2007, when we stopped publishing. 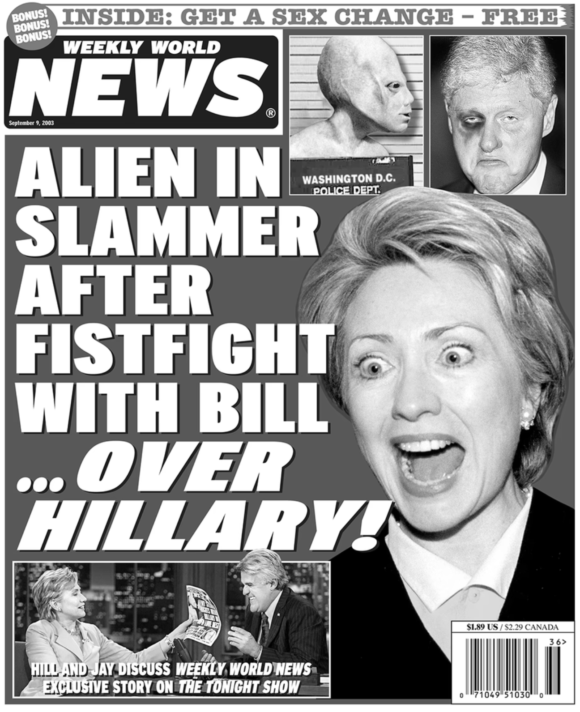 Editorial policy was that we always maintained “the world’s most reliable newspaper” fiction to readers and callers, as if everything we published was the absolute truth. A few years after the News closed its doors, when I was asked to contribute a story to an anthology of vampire stories, I wrote it from the point of view of Leo Persky (known to his readers as “Terrance Strange”), who existed in a universe where every word in the paper printed was the absolute 100 percent truth, from Bat Boy and Bigfoot to aliens and Satan.

Leo is a hoot to write, a snarky cynic after my own heart who is nonetheless, “a rare combination of schlemiel and schlimazel. The schlemiel is the unlucky soul who leans against a fence and knocks it over, the schlimazel the poor schmuck the fence falls on. Leo somehow manages to be both and knocks the fence over onto himself.” 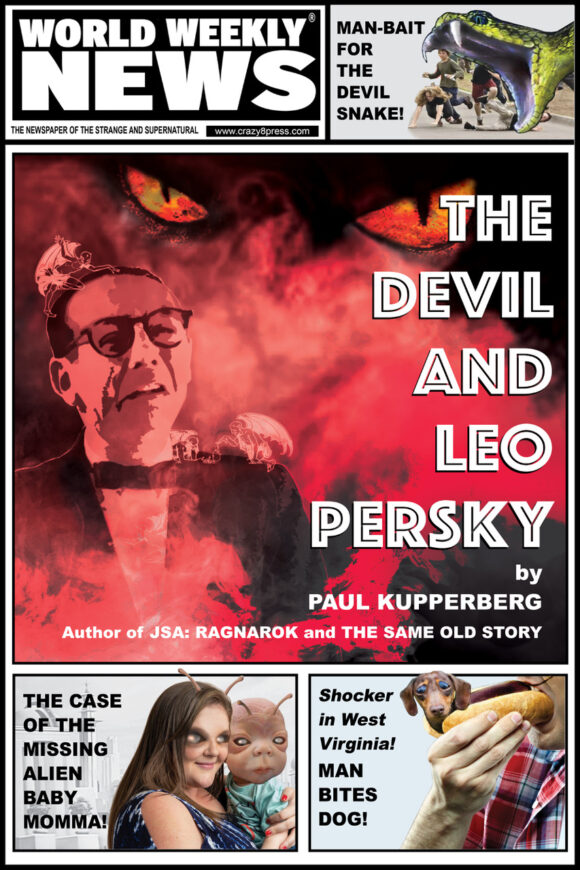 I had so much fun writing that first story (“Man Bites Dog”) that I went on, over the next decade to write five more stories starring Leo (including one about his mother). Now, I’ve put them all together in a single volume, topped off with an all-new 27,000-word novella, for my newest release from Crazy 8 Press, The Devil and Leo Persky now available in paperback and ebook. You can also order signed & personalized copies directly from me, $20 US / $30 Canada / $36 Overseas (shipping included) payable to PayPal.me/PaulKupperberg.

By the way, I didn’t just write for the News! When art was needed for this Jim Grand story about a man buried alive, I went home that night and took a couple of photographs in my back yard and the rest is Photoshop history! May 23, 2005. Politics always stank and the News was always eager to sniff out trouble. 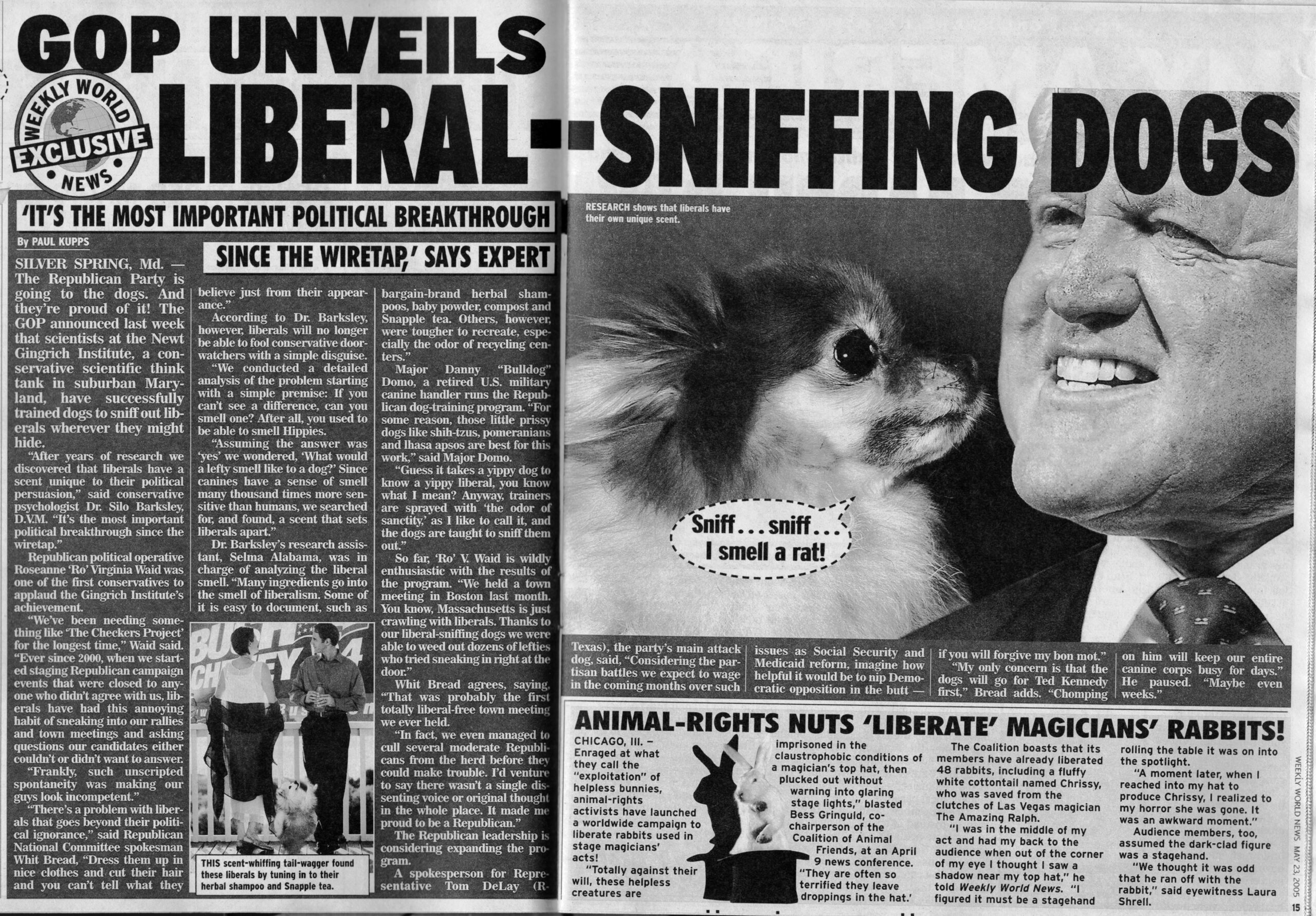 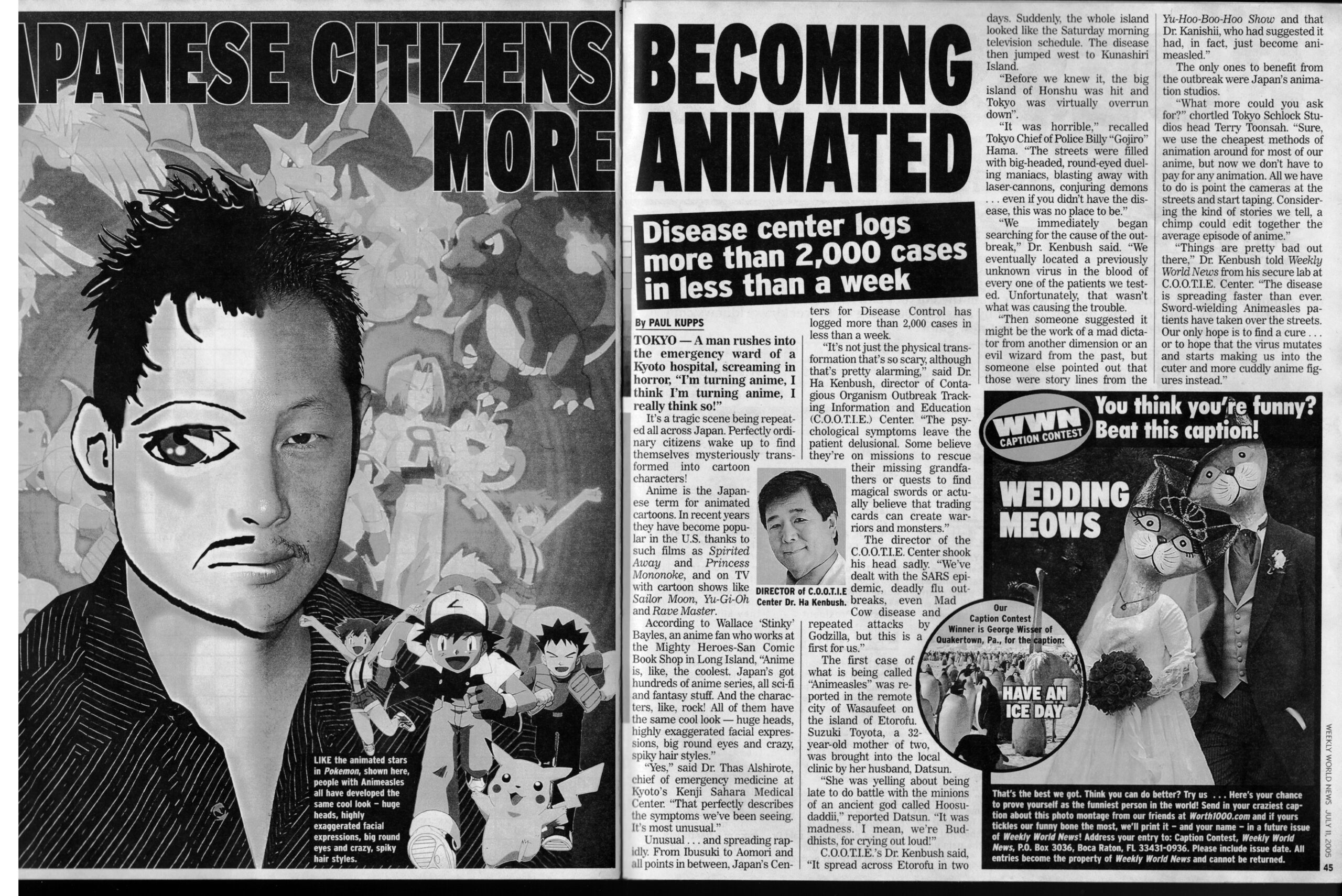 June 27, 2005. Any similarities to people living or dead is strictly coincidental. 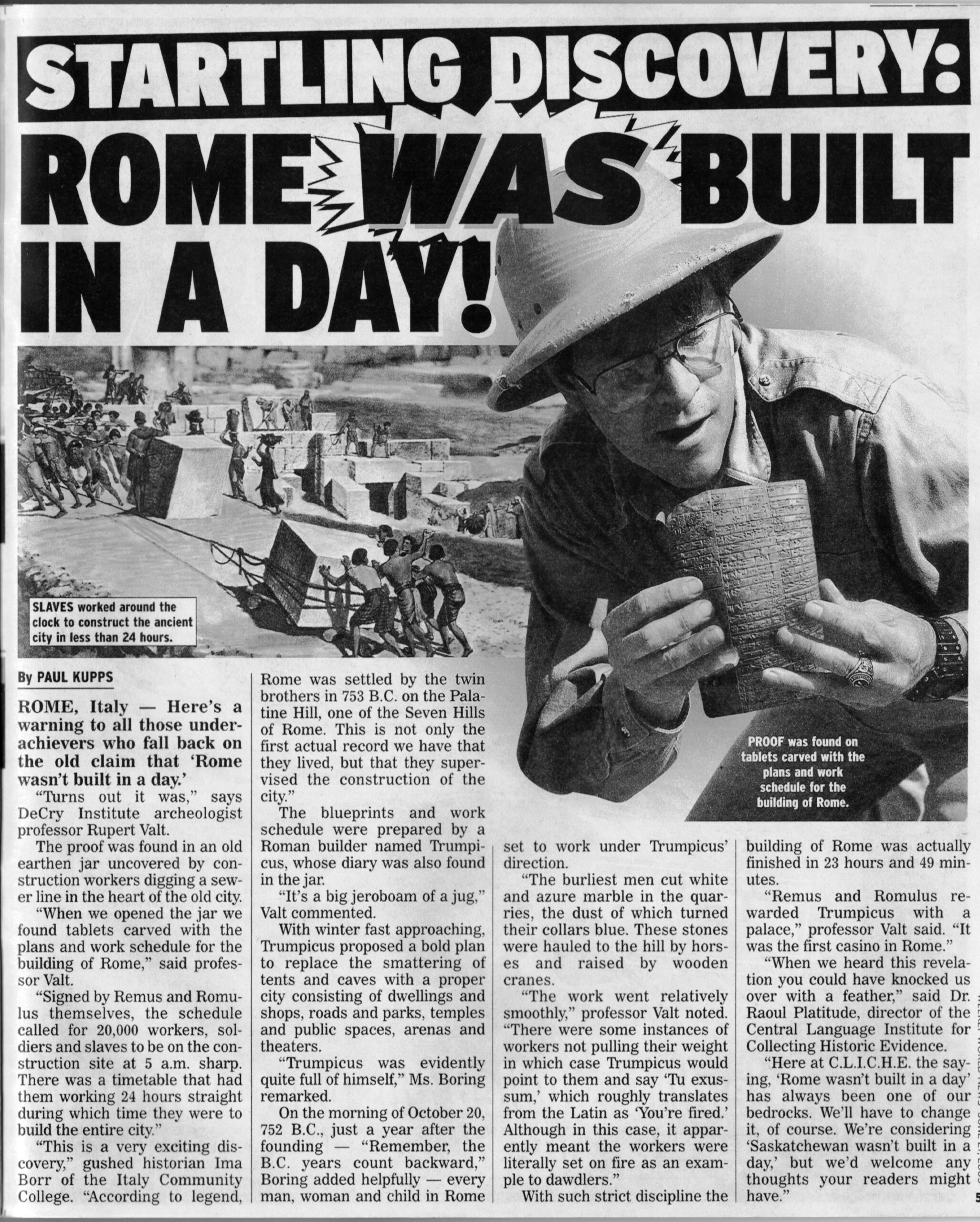 July 4, 2005. Inspired by true events! A real-life “runaway bride” was making news and as a WWN reporter, it was my job to find the news and mock it! 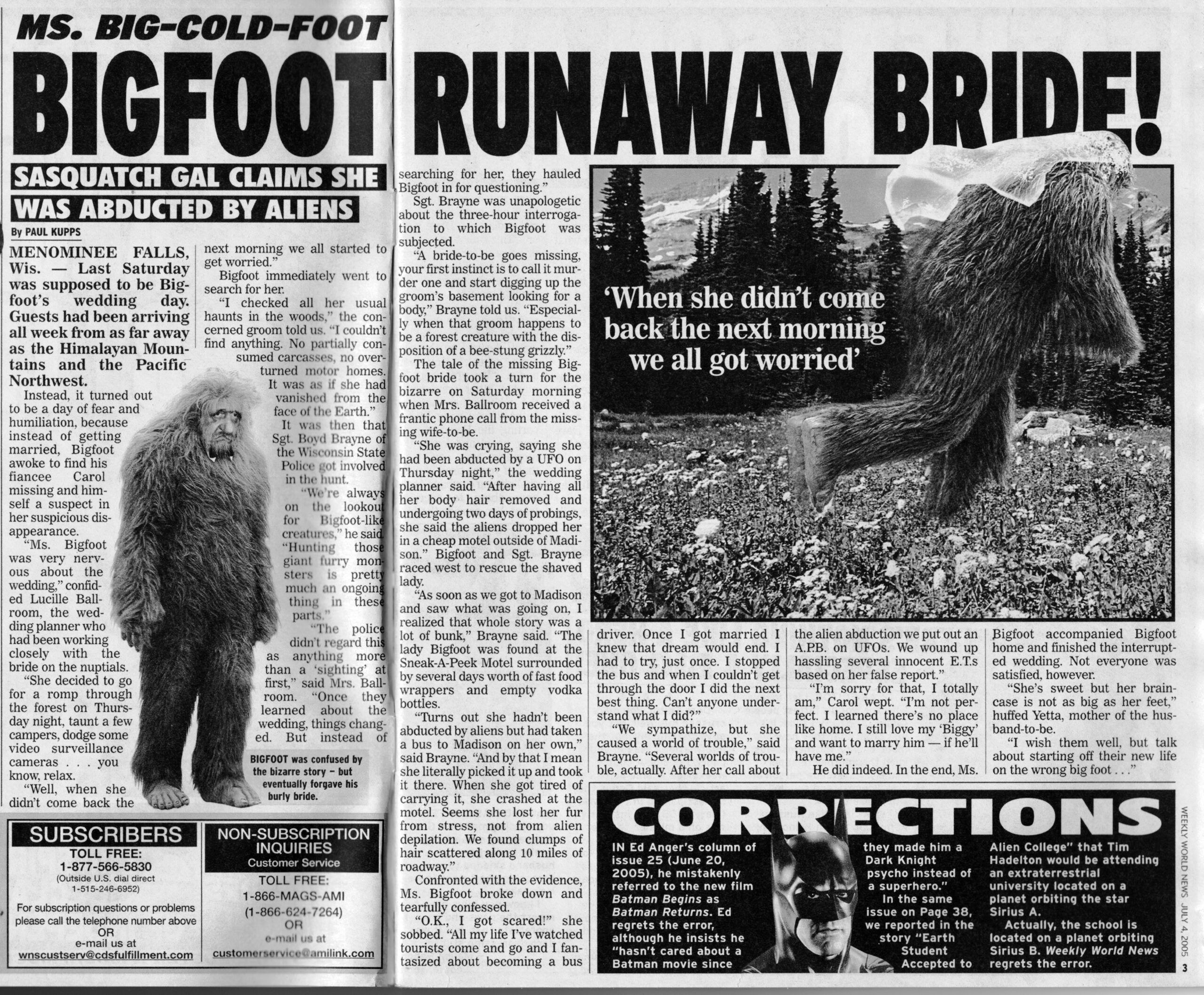 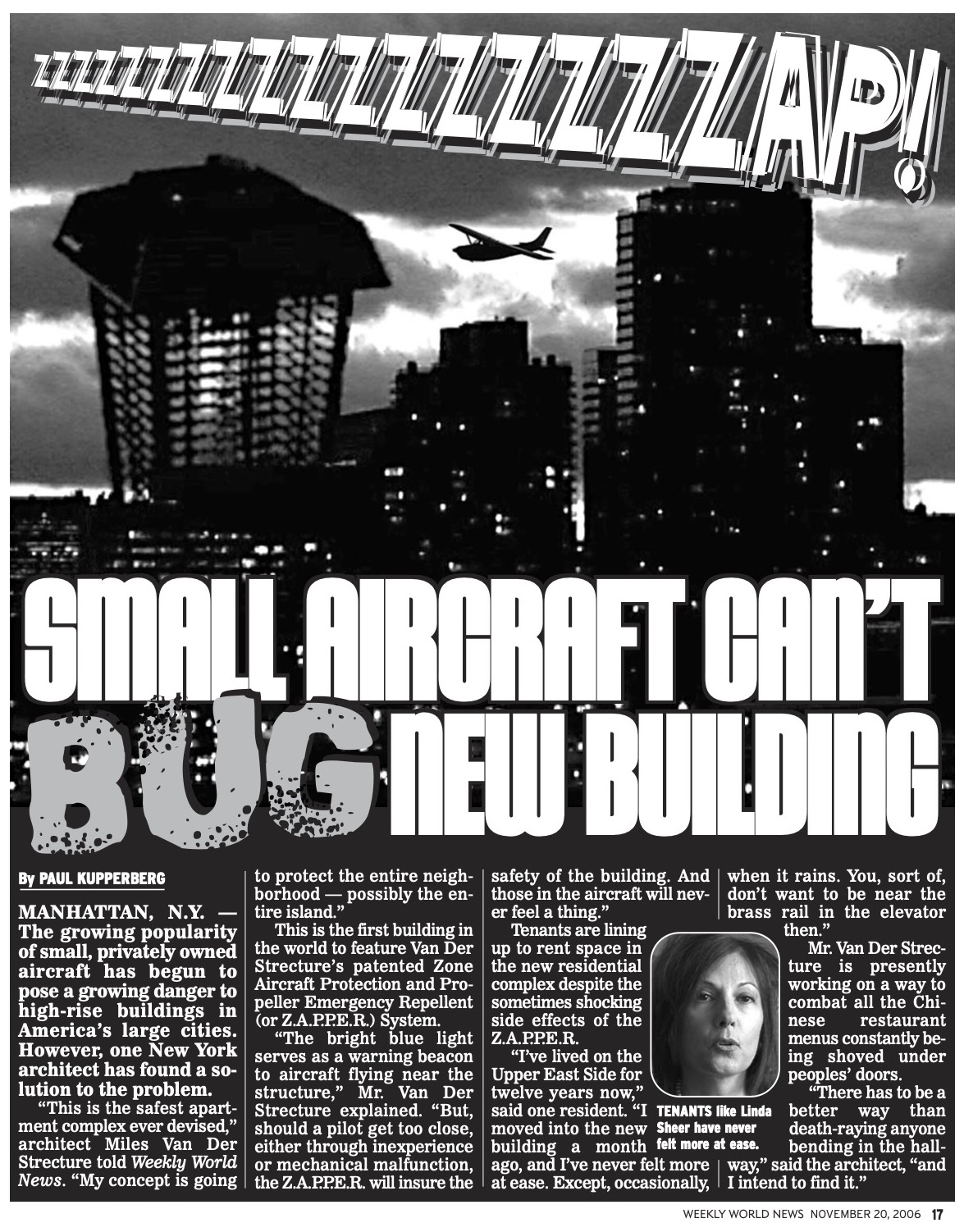 November 27, 2006. No matter how much we enjoyed a good tuna salad on a hard roll, we stood by our mer-people population because it was the right thing to do. 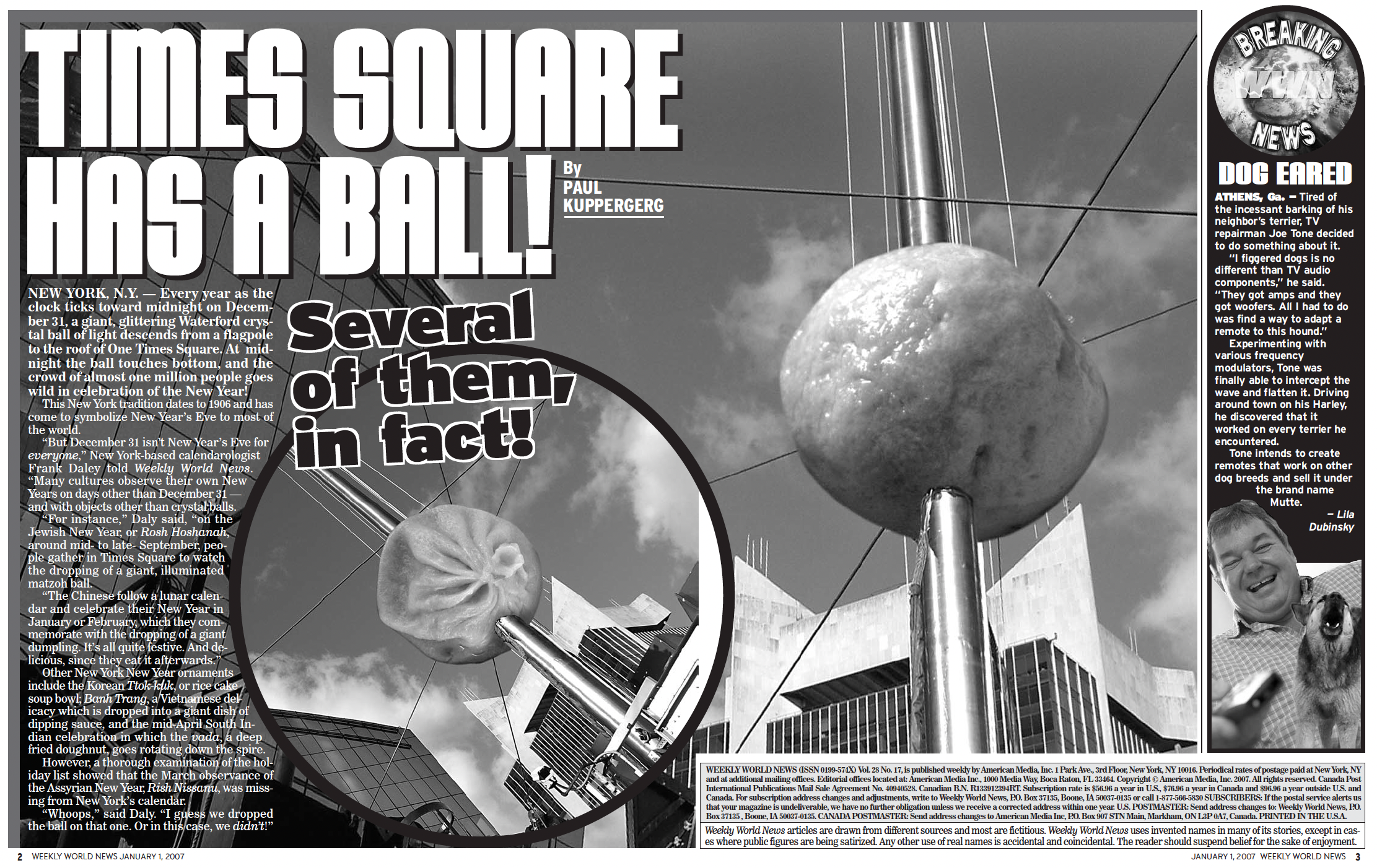 January 15, 2007. One of the News’ most popular features was any one of the dozens of variations we did on visits to Heaven and Hell. 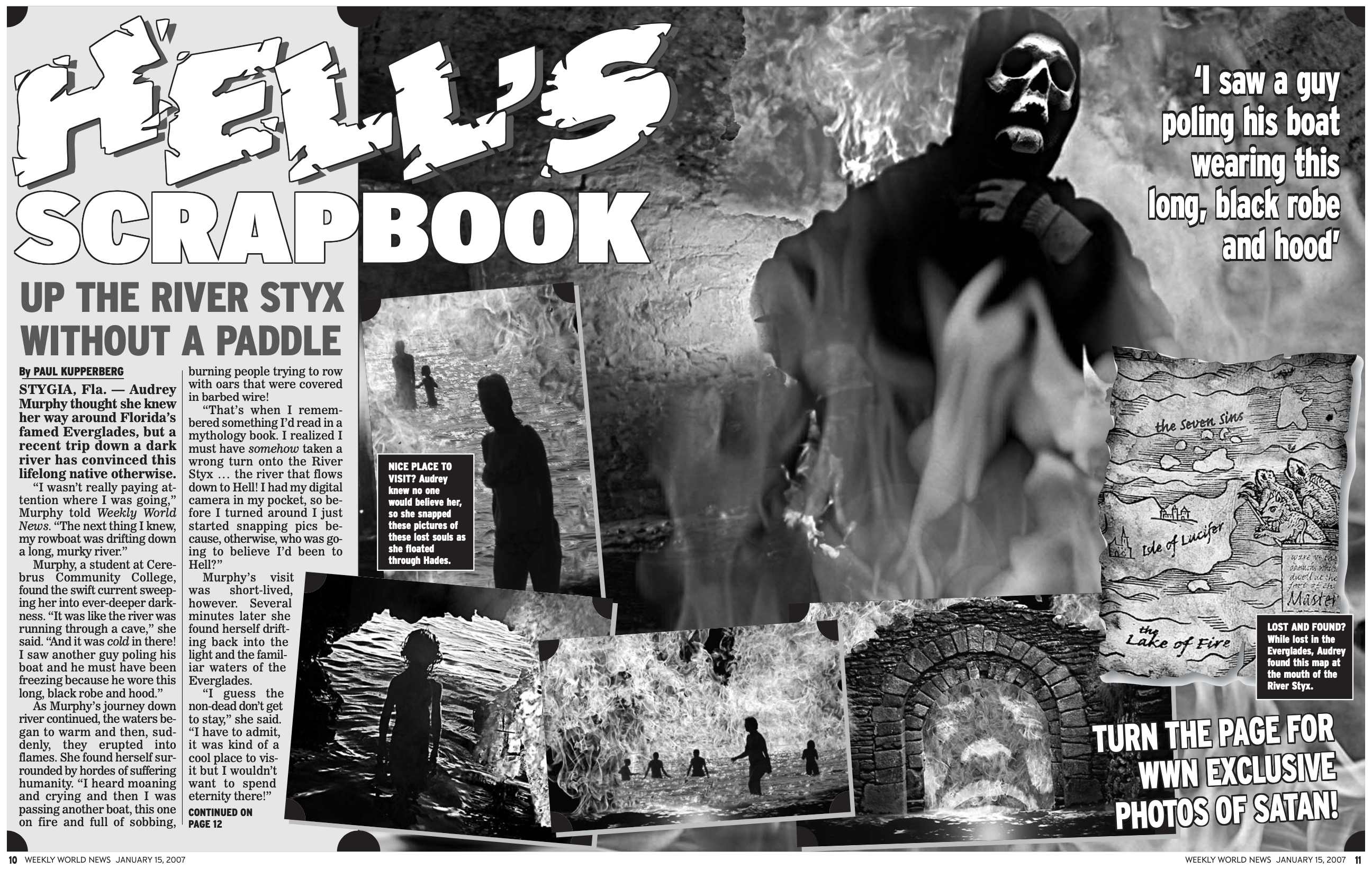 June 11, 2007. Guest-starring my son Max as the foil-hat wearing youngster, warding off aliens with his cymbal stand. 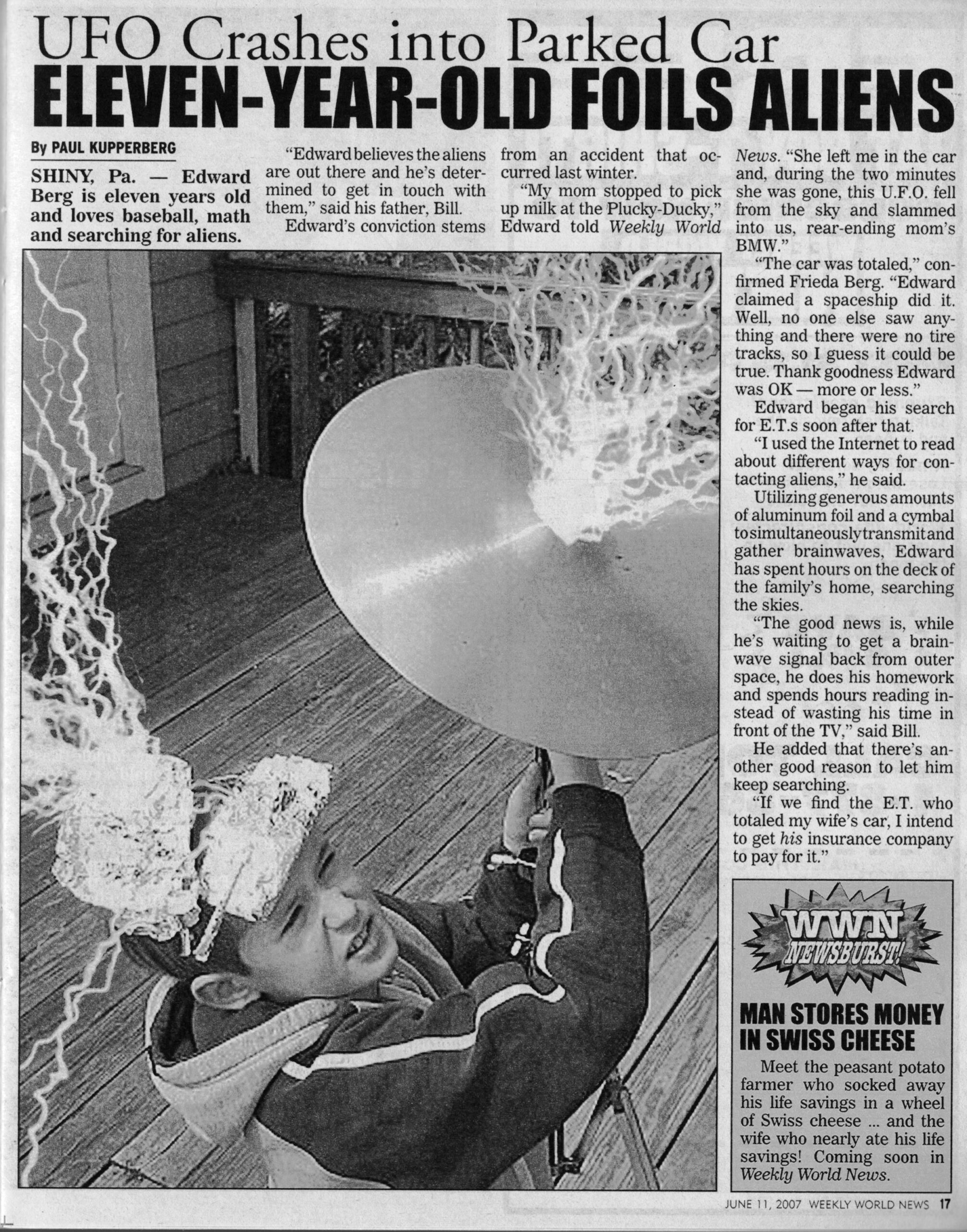