The celebrated Mr. K has produced a raft of books for younger readers — many of them great for holiday lists… 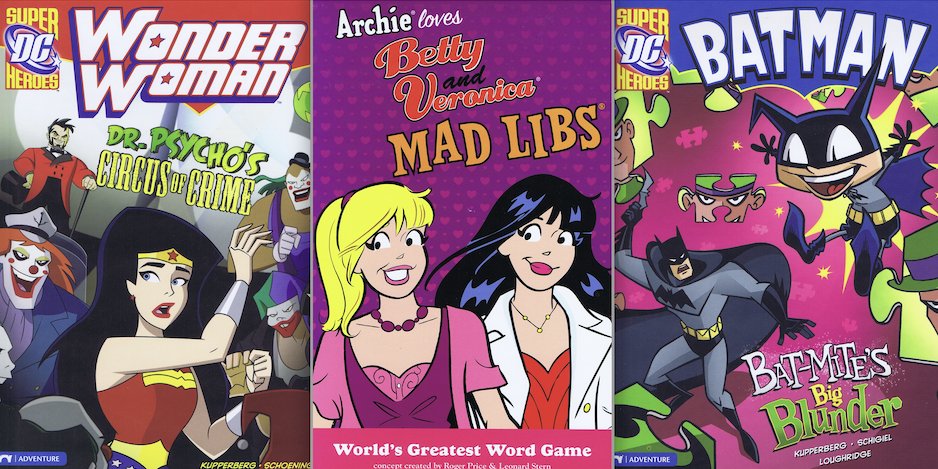 People often ask me, “Have I ever read anything you’ve written?” To which I can only reply, “I don’t know. Tell me everything you’ve ever read.”

But the truth is, it’s not out of the realm of possibility that some stranger outside of the comic book community might have come across something I’ve written beyond the tons of comic book stories I’ve done. In my own experience, it was only in 2009 that I realized The Magic Tunnel, a favorite young readers novel that I first read around 1965, had been illustrated by Jerry Robinson, co-creator with Bob Kane and Bill Finger of many of the early elements of Batman.

As a freelance writer, I’ve always tried to maintain a couple of side gigs, whether it was in fiction or nonfiction, usually outside of comics, allowing me to stretch a little and get out of the four-color rut, even if some of those side projects did now and then feature comic-book characters. Later, when I had the spare time and the confidence, I started writing original stories and novels, several of them aimed at younger readers. 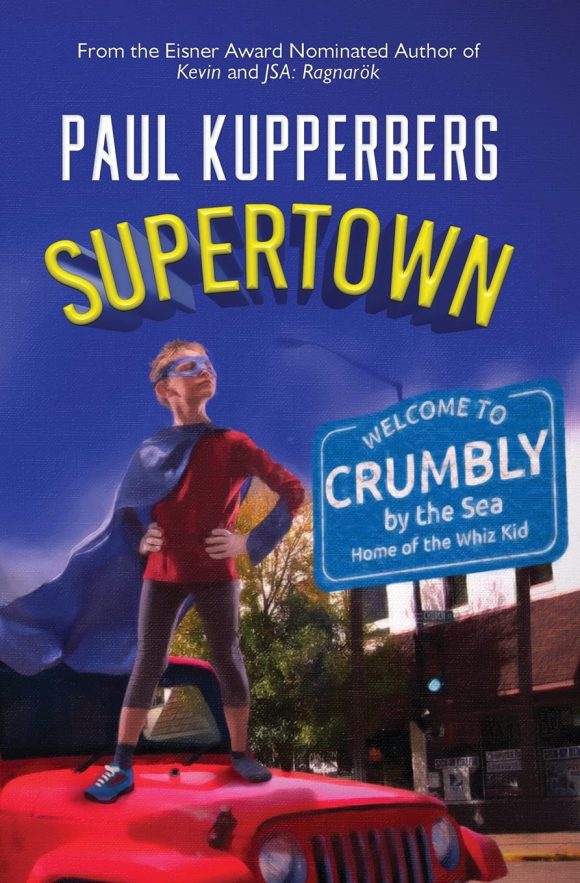 Like what, you ask? Well, like Supertown (coming in February from Heliosphere Books but available now for pre-order on Amazon, about which Kirkus Reviews wrote, “Kupperberg’s yarn is packed with twists and turns and a cinematic panache (and a healthy helping of action and high-tech gadgetry) that most comic fans will appreciate.”

And there’s also my fantasy/adventure story, Emma’s Landing (also on Amazon), the time traveling tale of a New York City middle-school blogger relocated to live with her grandmother in the Florida Everglades where the mysteries are as thick as the humidity and mosquitoes, and answers can only be found in the days of centuries past. 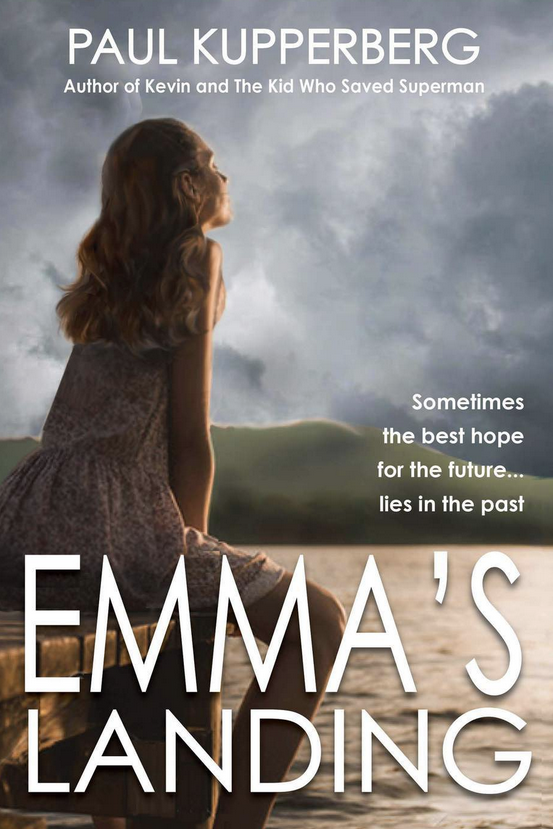 You’re probably not aware most of these existed, but here are MY 13 FAVORITE KIDS’ BOOKS (that I happen to have written):

The Library of Astronaut Biographies: John Glenn, the First American in Orbit and His Return to Space (Rosen Publishing, 2004). Remember those hardcover book series that you only ever found in school libraries, dedicated to different subjects in everything from science and history to sports and careers that you would crib from to write papers? Well, someone has to write them and folks, I wrote me a few. These tomes were usually anywhere from 8,000 to 25,000 words and were profusely and colorfully illustrated. John Glenn, the First American in Orbit is the one closest to my heart. Not only did I grow up with the Mercury, Gemini and Apollo space programs and their hero astronauts (I have vivid memories of watching Glenn’s first mission on TV), but after it was published, I sent two copies to the John & Annie Glenn Museum in New Concord, OH, one inscribed to him, the second with a self-addressed/stamped envelope, which the senator made the intended use of. Latchkeys: Splinters (Crazy 8 Press, 2013). Latchkeys was a shared universe anthology from us kids at Crazy 8 Press where there was this house, Tanglewood, which was filled with an infinite number of doors made from the wood of the Norse World Tree, Yggdrasil, each door leading to another time and/or universe. But one day, the doors all disappear and our young heroes, the Wardens of the doors, must find them, no matter where or when the darkened doorways lead. My contribution is “Bootleg Wars,” set in a speakeasy in Depression-era New York. 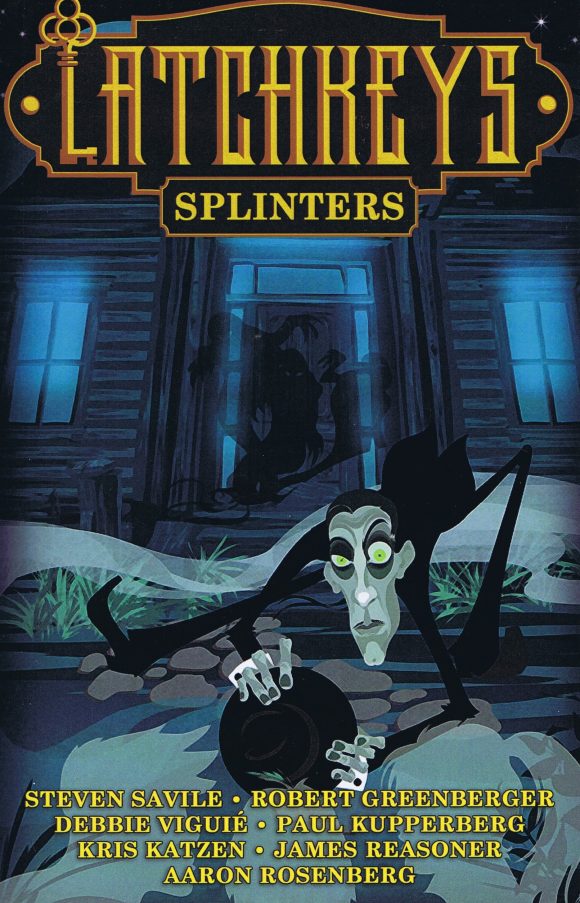 Kevin (Grosset & Dunlap, 2013). The first LGBTQ character in Archie Comics (created by Dan Parent), Kevin Keller played a major role in my run on Life With Archie, and I was given the opportunity to write his first (and so far, only) prose tale, his coming out/coming of age story set during his middle school days. It was the book that got me (and Dan) invited to do an author’s talk and reading at New York’s prestigious Strand Book Store and nominated for a GLAAD Media Award. The World of Rodeo: Rodeo Clowns (Rosen Publishing, 2006). From the all-American heroes of space to a more down-to-Earth hero, the rodeo clown. Yeah, I laughed when I was offered the assignment to write about the world of rodeo clowns, including how an individual would go about fulfilling the dream of becoming one. But in the course of researching the subject, I had to admit to developing a grudging respect for the profession. We can debate the pros and cons of rodeos till the broncs come bucking home, but the clown’s job is to throw themselves between half a ton of pissed off beef and vulnerable cowboys, mindless of their own safety. Who knew? 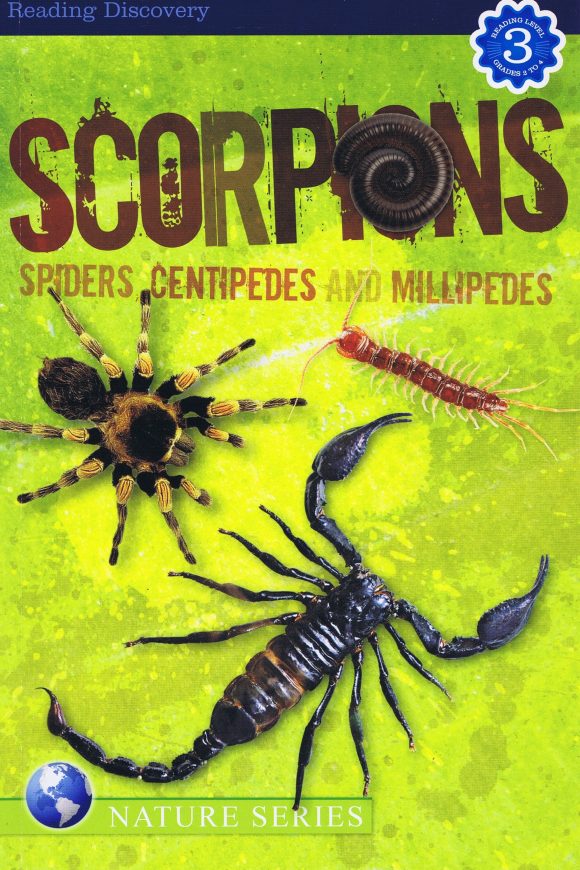 Critical Anthologies of Nonfiction Writing: Critical Perspectives on the Great Depression (Rosen Publishing, 2005). I’ve always been very proud of this one. The heavy lifting wasn’t in the writing, which consisted of an introduction and brief paragraphs before each piece, but in selecting the 1930s and 1940s era contemporary essays and articles that it reprinted. From The New York Times’ first story about the stock market crash in October 1929 to James Agee’s touching “‘A Soldier Died Today’: The Death of FDR, April 12, 1945,” it traced the path of two of the most tumultuous decades in our history, from the start of the Great Depression to the end of World War II through the writings of the people who experienced it. Archie Loves Betty and Veronica Mad Libs (Penguin Books, 2014). That’s right. I wrote Mad Libs. Four of ’em, this one and DC Superhero Mad Libs, Marvel Avengers Mad Libs, and the unpublished Archie’s Pal Kevin Keller Mad Libs. Not as (adjective) to write as you might think, but a (noun) of fun to work on. 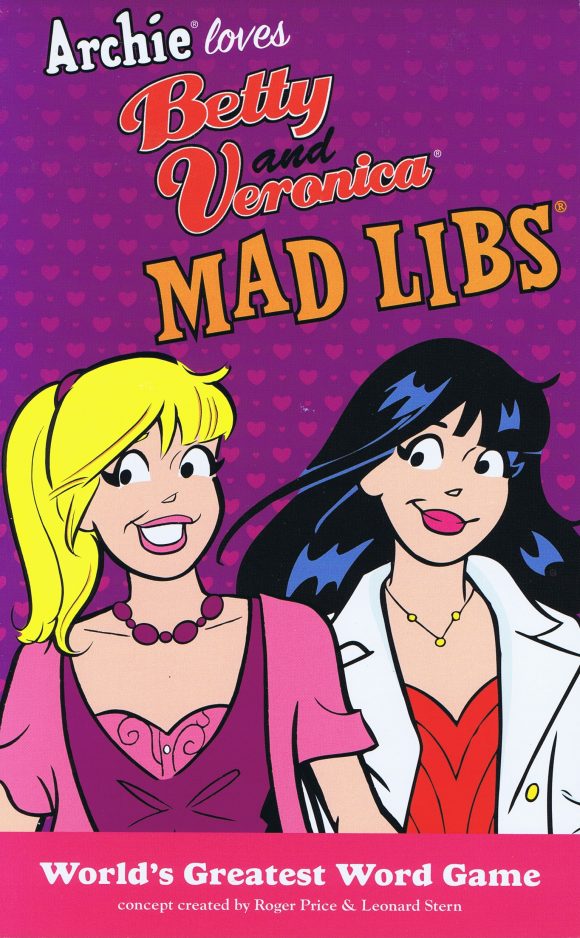 Great Historic Disasters: The Influenza Pandemic of 1918-1919 (Chelsea House, 2008). I got to write a lot of history in the more than dozen nonfiction books I worked on, but this is thus far the only one of the volumes that has renewed relevance to its readers, beyond academic interest. 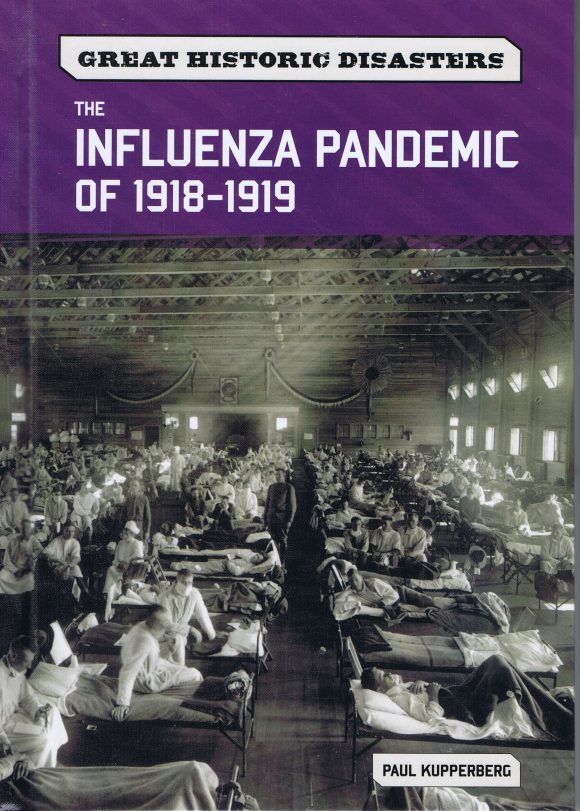 The Powerpuff Girls: Buttercup’s Terrible Temper Tantrums (Scholastic Books, 2002). A “Pick a Powerpuff Path” choose-your-own-adventure story with lots of “If Buttercup decides to use her own plan, turn to page 32. If Buttercup decides her plan is no good, tun to page 20.” Just as I’m no good at either jigsaw or crossword puzzles, this story gave me a headache while I tried to figure out whether I’d left any loose ends dangling. If I did, go to page 42… 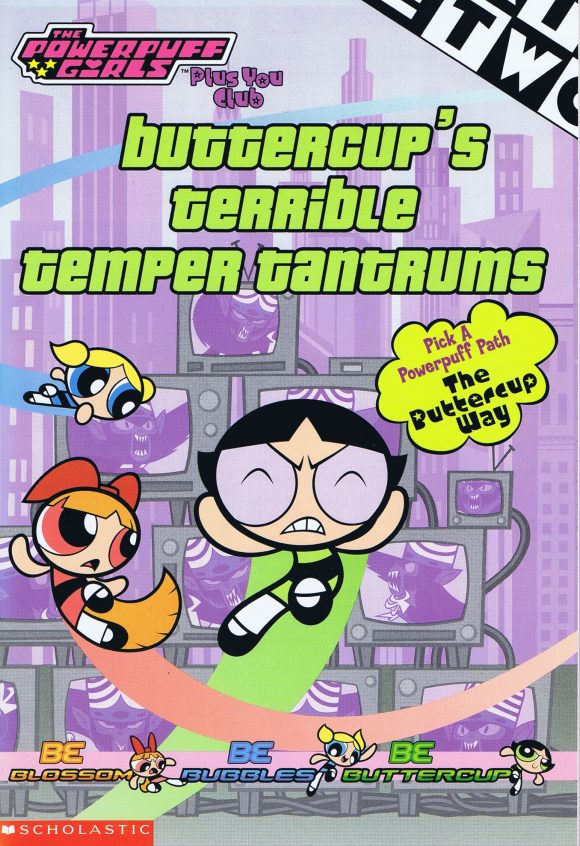 Dreamworks’ Madagascar 3: Big Best Book to Color With 50 Stickers: Life is a Circus (Dalmatian Press, 2012). What? You think color and activity books just happen? Well, OK. Some do; as an editor in DC’s Licensed Publishing department, I once had to commission art simultaneously for three 500-page coloring books (no activities) in which the only instruction to the artists at the studios I’d hired were lists of characters and the number of pages featuring them to draw. But most, especially those based on animated properties that have to tell the story of a film, are fully scripted, and all the puzzles and activities written to the story being told. I wrote a bunch of C&As for this publisher based on the Madagascar, Puss in Boots, Megamind and Kung Fu Panda franchises. All I can say is thank goodness for online crossword puzzle and find-a-word generators! 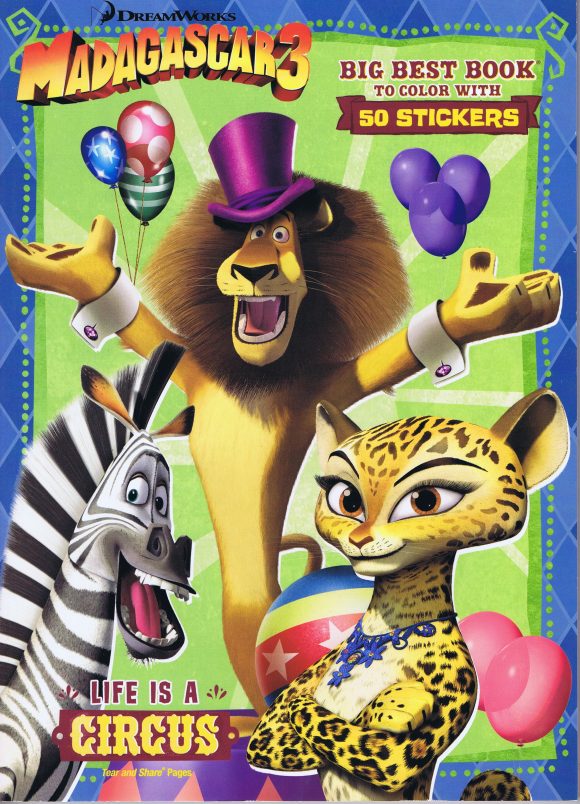 Superman: Super-Villain Showdown (Stone Arch Books, 2010). Classic Superman in a showdown with a classic villain, the inevitable Terra-Man. At least he feels inevitable; it seems to me I used Terra-Man more than was really necessary during my time writing Superman. Wonder Woman: Dr. Psycho’s Circus of Crime (Stone Arch Books, 2011). Despite my close association for a time with Wonder Woman as editor of the title, I’ve never really had the opportunity to write the character. The closest I came was this illustrated chapter book. 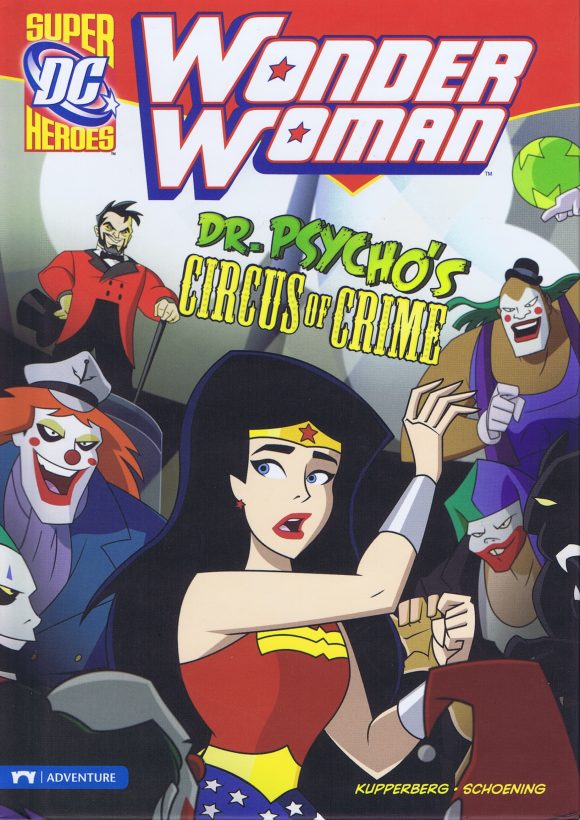 Batman: Bat-Mite’s Big Blunder (Stone Arch Books, 2010). Just to round out the bragging rights to having gotten to write DC’s Big Three in illustrated, chapter book format. And Bat-Mite. 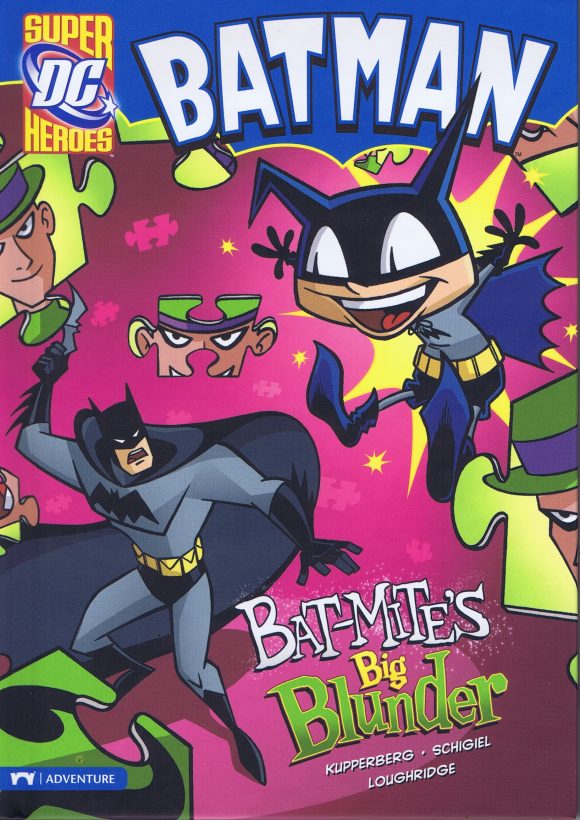