I doubt that my mom ever read a comic book in her life, including those containing the work of her two sons in the business. I know she flipped through the copies of our work that we brought home to show off to our parents and was proud of our achievements, but comics simply weren’t her cup of cawfee (we lived in Brooklyn).

(My dad no doubt read a few comics in his time and I know for a fact he read the pulps in the 1930s and ’40s; he remembered G-8 and his Battle Aces and other titles, and when I first brought home the Conan paperbacks in the 1960s, he asked, “Isn’t he the one they used to call Amra the Lion?”) 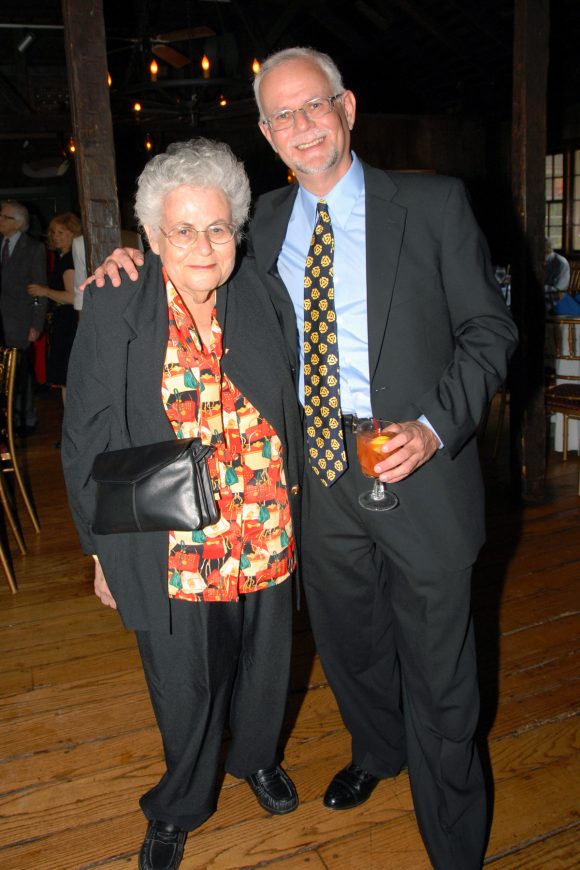 Paul and his mom, Lottie

My mom Lottie Claire Blumenfeld Kupperberg (March 11, 1931 – June 2, 2012) would have been 91 years old today. In my own personal list of 13 Favorite Moms, she’s No. 1, so in her memory, I’d like to take a look at some comic-book and comic-strip mothers who have made an impression on me over the years.

Queen Hippolyta, DC. Wonder Woman’s mother Hippolyta, queen of the Amazons, was the first mom I remember encountering in comic books, way back in the late-1950s/early-1960s Robert Kanigher, Ross Andru and Mike Esposito days. Like my own mom, she knew her kid was special and encouraged Diana to follow her own path. Fortunately, my own mother didn’t follow Hippolyta’s character arc and, however may reboots I went through in my life, she never turned to lies and deception to manipulate and control me for my own good… a plot point I was involved in during my run as editor of Wonder Woman in the 1990s. 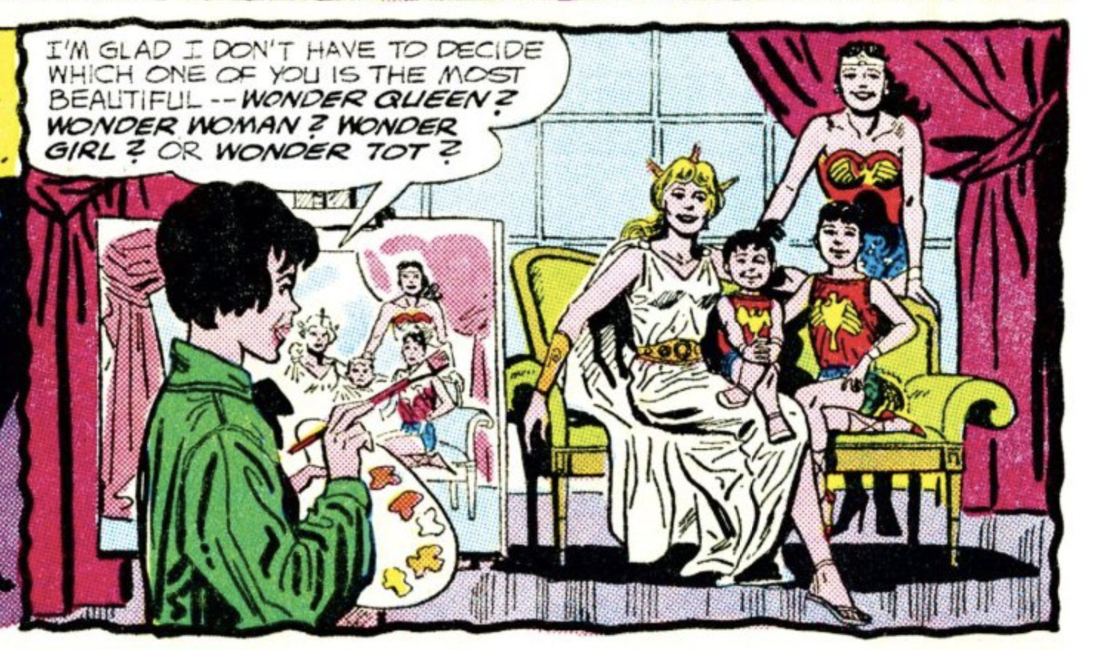 Martha Kent, DC. My everlasting impression of Superman’s mother doesn’t come from the comics, but from the 1950s Adventures of Superman TV show where Frances Morris, as Sarah Kent, appeared in the opening episode and origin story, Superman on Earth. In it, she gives this choked-up little speech to Clark at the bus station as he’s leaving town for his new life in Metropolis after the death of dad Eben Kent (played by Tom Fadden): “I’m gonna be just fine, with cousin Edith coming to live with me and all. Besides, you’ve got a great responsibility to the world, Clark. You’ve got to accept it. Make use of your great powers. You sure you packed that costume I made for you?” First of all, suck it Spider-Man with your “great powers” that come with a “great responsibility,” and second, Sarah was just like a real mom, making sure her boy had his galoshes on before he went out into the snow. Over the decades, Sarah eventually became Martha, and Martha would undergo several transformations, from white-haired roly-poly matriarch in the comics to younger women like Annette O’Toole and Diane Lane on the big screen. 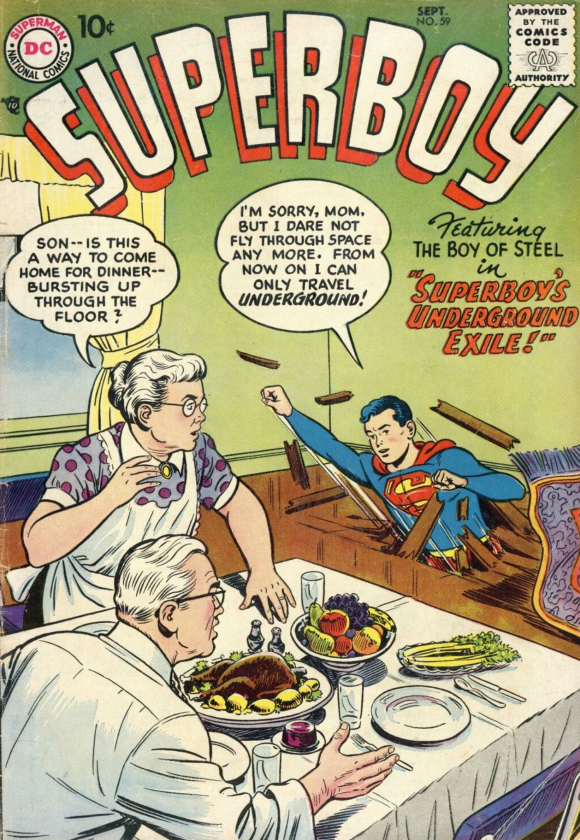 Mera, DC. While there had been many mothers before Mera in comics, she was, if memory serves me (and it will have to; there’s only so much research I’m going to do at these prices), the first superhero mom to give birth in the comics. Arthur Curry Jr. was born in Aquaman #23 (Oct. 1965, three years before Franklin Richards in Fantastic Four Annual #6). Mera was a good mother, but the life of the offspring of superheroes is bound to be fraught with danger and Aquababy was eventually fraught to death. Confession: I helped put the little tyke in the ground in Aquaman #62 (July 1978), but admit it: There was something freaky about the kid! In 13 years, he’d only managed to reach the age of maybe 3. What was up with that? 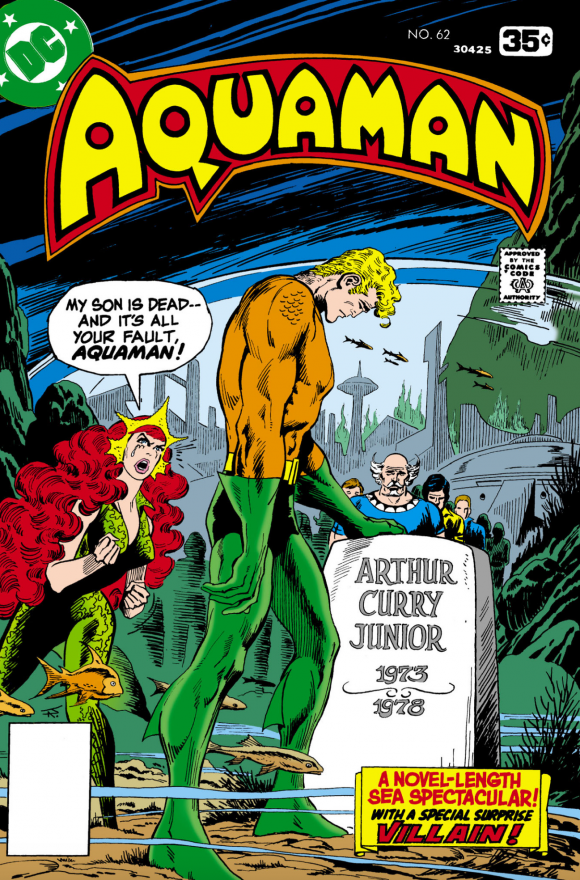 May Parker, Marvel. While not an actual biological mom, Peter Parker’s Aunt May has always represented Marvel’s main mother figure to me. This kindly, frail old woman proved, from the start, that her child, or, in this case, nephew, was the most important person in her world and often sacrificed her own well-being in order to provide for him.

Like Martha Kent, she’s undergone an amazing transformation over the years, from Steve Ditko’s spindly old scarecrow to the likes of Marissa Tomei, but those changes have all been cosmetic. 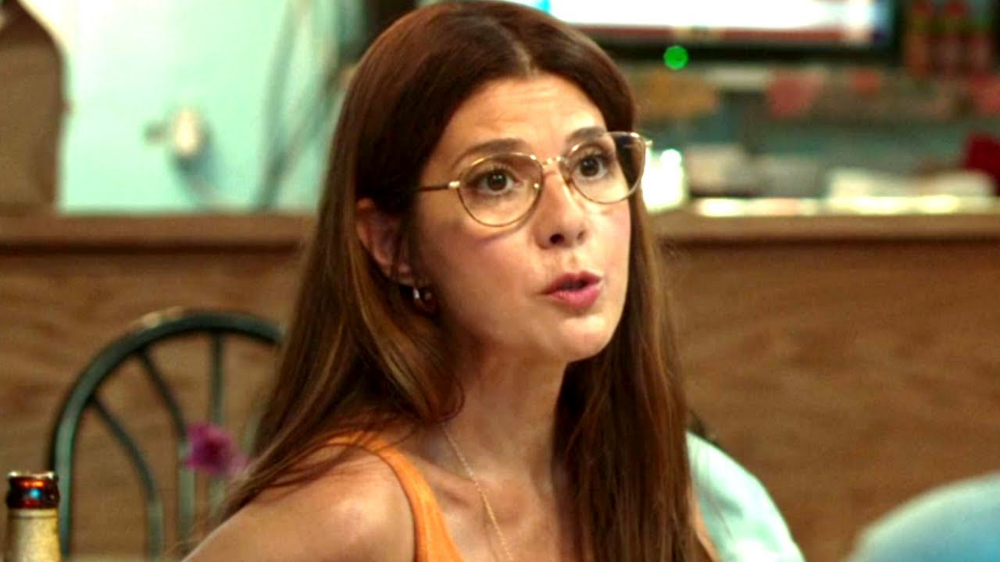 Underneath, she remains the same, steadfast mother, which brings me to…

“Momma” Sonya Hobbs, Field Newspaper Syndicate. …Because as I’m writing the column, I’m starting to see a pattern here. These aren’t just comic book mothers, they’re comic book Jewish mothers, some, like Aunt May, the very epitome of the punchline about the Jewish momma who tells her son not to bother coming over to change a lightbulb: “I’m alright. I’ll just sit here in the dark.” But it makes sense: Most of these mothers were created and written by Jewish sons — Kanigher, Siegel, Lee. And it’s no surprise that we real sons of Jewish mothers were instantly able to recognize the universal truths in Mell Lazarus’ syndicated strip, Momma (Oct. 26, 1970-July 10, 2016)… because, remember, though all that smothering is done in the name of love, it is smothering nonetheless.

Sue Storm Richards, Marvel. You’ve really got to question Sue Storm’s parenting qualifications. Just getting pregnant in the first place after having been exposed to cosmic rays that radically altered your genetic structure is in itself a highly questionable decision. Leaving toddler Franklin in the care of a witch and later allowing the pre-adolescent to embark on dangerous missions across time and space… also questionable. My mom was nervous about me taking the subway into Manhattan. No way was I going be allowed to take a trip into the Negative Zone! 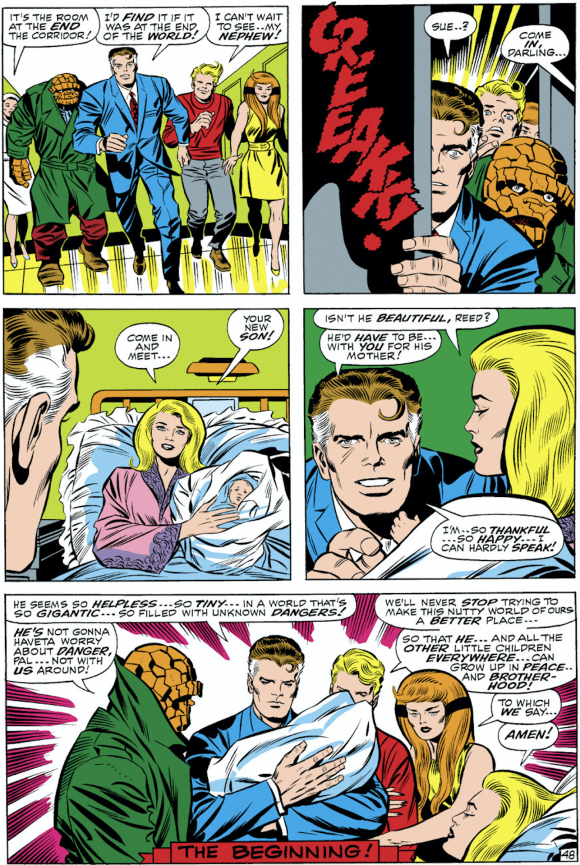 Martha Wayne, DC. Poor Martha! For a long time, she had one of the shortest roles in a major character’s history: She’s introduced and shot dead within the first four panels of Batman’s origin in Detective Comics #33 (Nov. 1939). But as Bruce seemed like a well behaved and mannered young man, I’m going to give her the benefit of the doubt. And also, because Superman’s mom was also named Martha. (Gasp!) Alura Zor-El, DC. Kara (Supergirl) Zor-El’s mom, she played a major role in a favorite storyline of mine from back when the Maid of Might was a back-up feature in Action Comics, where she was introduced in #252 (May 1959). In it, Supergirl learned that her parents had survived the destruction of Argo City (the domed chunk of Krypton flung into space when the planet exploded) by projecting themselves into the Survival Zone, which I guess was like the Phantom Zone but without the icky criminal element, after rocketing her off to Earth to join her cousin, Superman. Supergirl rescued them (Action Comics #310, March 1964), and they resettled in the bottle city of Kandor. In the 1980s, when I was writing yet the latest Supergirl revamp for DC Double Comics (which went unpublished after the Crisis wiped Supergirl and her co-star Superboy from continuity, although you can read those unpublished scripts in the appropriately titled The Unpublished Comic Book Scripts of Paul Kupperberg (available on Amazon), I brought Alura (and Zor-El) back, giving me the opportunity to write at least one nice mother-daughter scene for my favorite superheroine.

Blondie Bumstead, King Features Syndicate. Say what you will about Blondie Bumstead’s (nee Boopadoop) airhead, flapper roots, the young lady has come a long way since her introduction Sept. 8, 1930. She started as a scatterbrain, but readers learned that there was a logic to her madness, a lot like the character Gracie Allen would create with her husband, George Burns.

Abigail “Ma” Hunkel, DC. “Ma” Hunkel was a joke, of course. The oversized matron of might first appeared as a supporting character in Sheldon Mayer’s brilliant humor strip, Scribbly, Boy Cartoonist in All-American Comics #3 (June 1939). Then, wearing a costume scraped together from a pair of red longjohns, a yellow sweatshirt, black cape, and a cooking pot helmet, she became the Red Tornado in All-American #20 when Scribbly’s little brother Dinky and Ma Hunkel’s daughter Sisty were kidnapped. And not long after that, she made a failed and embarrassing bid for membership in the Justice Society of America in All-Star Comics #3. 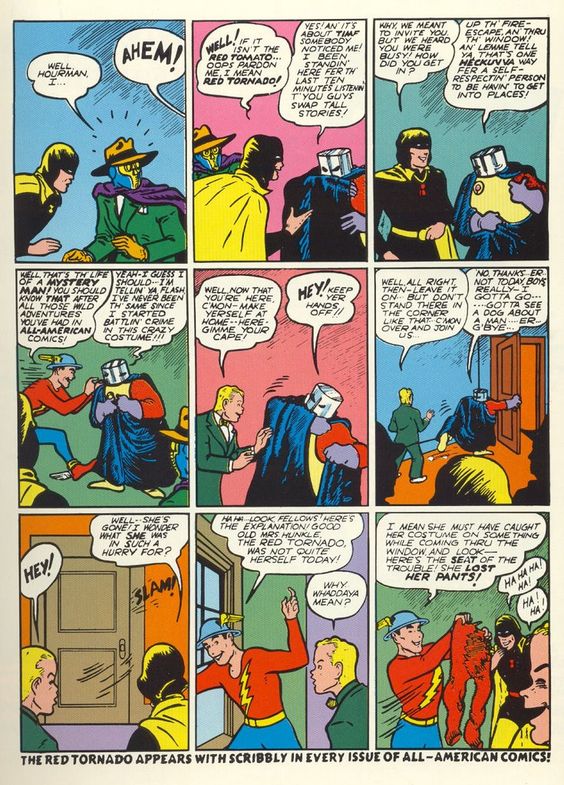 Talia al Ghul, DC. So, here’s an interesting direction to consider for raising your kid: Turn him over to be raised and trained by the League of Assassins to be a ruthless killer with the sole mission of killing his father, Bruce (Batman) Wayne. I take it back, Sue Storm… you did just fine! 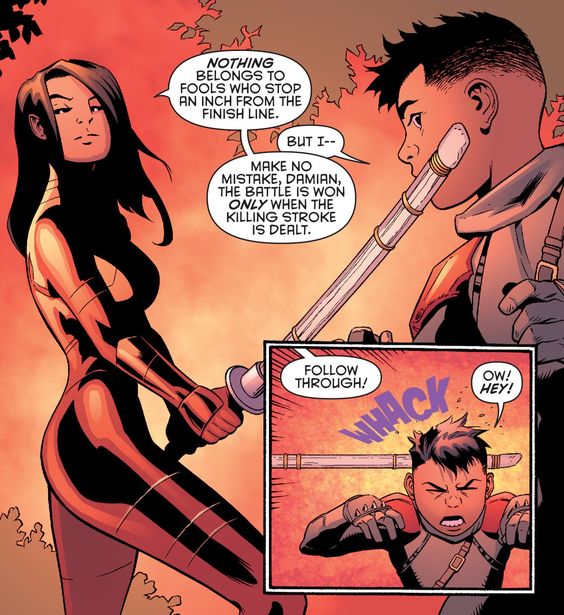 Jessica Jones, Marvel. Lots of comic book moms have to balance motherhood and superheroics, but few have done it better than Jessica Jones. Safeguarding her daughter Danielle (with Luke Cage) was and remains her raison d’etre and she’s made a lot of difficult decisions to do so, including taking sides against Cage by signing the Superhuman Registration Act during the “Civil War.” 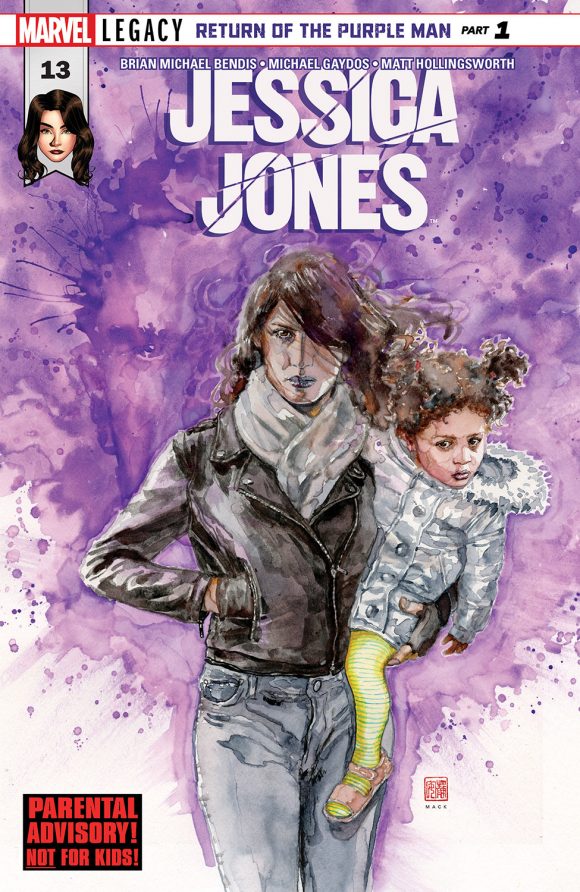 Calvin’s Mom, Universal Press Syndicate. The parents in Calvin and Hobbes remained nameless for the 10-year run of the classic comic strip, but Calvin’s long-suffering mom always seemed one of the most realistic mothers on the comics page. It wasn’t until I had a Calvin-aged son of my own (after the 1995 end date of the strip) that I realized how true-to-life her reactions were. His dad, like dads across all media, was a schmuck, but Mrs. Calvin’s Mom had it all together… even when Calvin’s antics were causing her to fall apart. Just like a real mom. 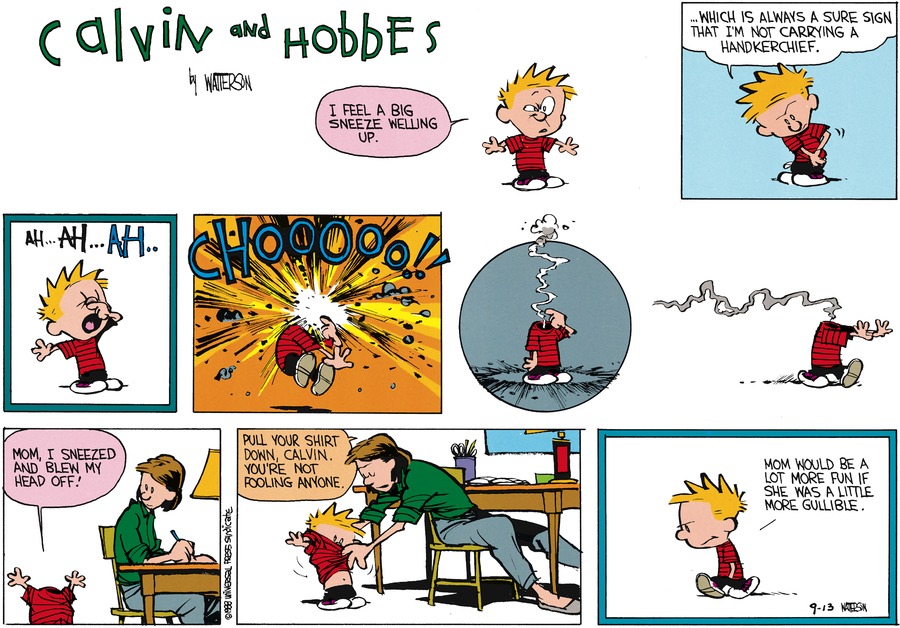