NORM BREYFOGLE: In His Own Words

Home » BATMAN'S HOT-LINE » NORM BREYFOGLE: In His Own Words

Norm Breyfogle’s one of those artists whose work defined a certain Batman era, in this case the late ‘80s and ‘90s…

UPDATED 2/27/20: Norm Breyfogle would have been 60 today. This was one of the first interviews published at 13th Dimension in 2013. It seems appropriate to share it again. And for THE TOP 13 NORM BREYFOGLE COVERS — RANKED, click here. — Dan

While Frank Miller, David Mazzucchelli and Brian Bolland were getting the kudos for various projects, there was Breyfogle, with his whizzy, dynamic art, keeping the trains running on time, first in Detective Comics starting in 1987, then onto Batman proper.

His style seemed at once ill-suited and perfectly matched to Batman. It was cartoony and bright but also exaggerated and, at times, creepy. He co-created, for example, Batman villains such as the serial killer Zsasz and the Ventriloquist, who always seemed like a Golden Age character discarded as too silly. 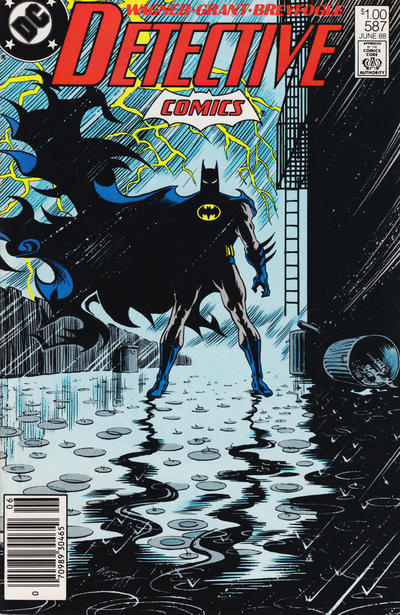 Breyfogle, 53, resides in Houghton, Mich., and has recently finished up his most recent foray into Gotham – a two-year run on the digital-first Batman Beyond Unlimited comic, based on the Batman Beyond animated TV series. It was his first steady Bat-related work in years but now he’s on to other things. He had plans to, among other things, work on a project for the Bermuda-based comics company A First Salvo,  not to mention a steady stream of fan commissions. 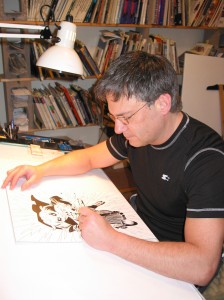 Since he’s no longer a regular part of the Batscene, but is so indelibly linked to the character, I couldn’t help but wonder what he thought of today’s Batman comics, which are DC’s biggest sellers as a group.

“I don’t read comics regularly like I used to years ago, but I do pick up a few issues every now and then to keep my eye on general trends,” he said. “I think comics (including the Batman titles) are at root more or less the same as they’ve been for a long time except for technological advancements and surface changes (like costume and accoutrements and supporting character cast changes), and they’re often a bit more sophisticated in at least some ways, and often more violent. But at base, Batman is still the Batman of my own fan days, with some ups and downs.”

Breyfogle’s love of the character goes back to his youth. Long before there were multiple Robins who wore armor and hoods and carried martial-arts weapons, there was the classic short-panted, pixie-booted Dick Grayson. And in the years after the end of the 1960s TV show, fans frequently complained about his less-than-practical crimefighting get-up.

So they used to send their own ideas to DC, which printed them on occasion. It was one of my favorite features as a kid. And, as it turns, out, one of the sketches was by a guy named Norm Breyfogle of Houghton, Mich., printed in Issue #13 of the late, lamented Batman Family title: 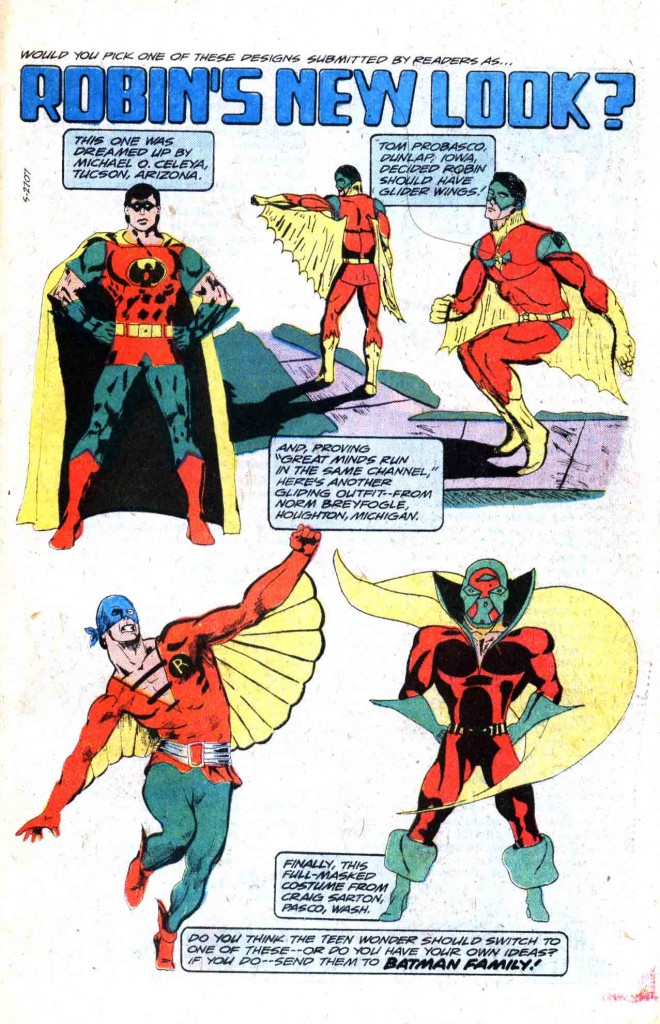 Check out the lower left. Dig that crazy bandanna mask! And all that CHEST!

Years later, he was one of the first to draw the third Robin, Tim Drake, who was the first to wear long pants and boots on a regular basis. He didn’t design the costume but he helped define the look.

With all his contributions to Batman lore and since he’s still a working artist, you’d think you’d see more of Breyfogle’s work.

Recently, artist Jerry Ordway, a contemporary of Breyfogle’s who was working on Superman while the latter was over in Gotham, wrote about ageism in the comics industry. It rattled a lot of cages and I asked Breyfogle for his take.

“Ah, yes. Jerry experienced/is experiencing what almost all comics creators –including me — experience/have experienced at the large publishing houses sooner or later: a kind of lack of respect for, and setting aside of, even the best creators who have been around a long time and who still can produce high quality material,” he said. “I find it appalling and unjustifiable on an aesthetic and humanistic level in many cases, but what can one do but keep trying to ‘re-invent’ oneself in order to counteract it?

“At base, capitalism breeds a voracious animal which always wants more, more, MORE of the bottom line at any and all cost, and actual artistic value (however any one person may define that) and humane considerations is not very important for such a ravenous creature,” he added. “This is why so many of these ravenous beasts aren’t humanitarians and wish to dissolve the USA’s safety net and social services (FDR’s Great Society programs) which helped to create what was the strongest middle class and greatest nation in the world.”

Breyfogle, however, seemed more mystified than bitter about his life after the Batcave.

“On the abstract end, drawing Batman for publication was one of my childhood dreams come true, and on the more concrete end, it’s the highlight of my career in many ways to this day, providing me with a good fan base for my art.”

“DC Comics hasn’t collected my Batman work in a trade paperback and there are no Breyfogle-based ‘Black and White’ Batman statues/figurines, and my fans are always asking me why,” he pointed out. “I have to tell them it’s simply not my decision.”

(UPDATED 9/26/18: Since this interview was first published, DC has released Legends of the Dark Knight: Norm Breyfogle. There is also a ‘Black and White’ statue available.) 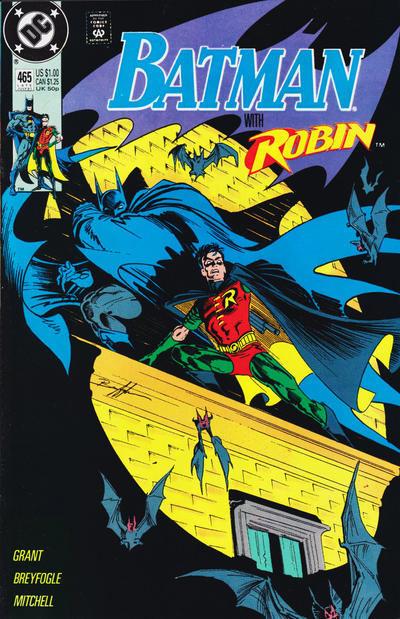 None of that has changed his abiding affection for the Caped Crusader. He offered up this short article he says he wrote 10 years ago, “Batman and Me”:

“As a child of 10, long before I realized the pen is mightier than the fist, I was so entranced with the Dark Knight that I seriously considered engineering a similar costume and going downtown at night looking for injustices to fight.

“Instead, I put it all on paper.

“As a fan I saw him as a master of reason, as the ultimate example of a sound mind in a sound body, as a perfected version of what I could become with enough training, as the man most capable of forcing justice and meaning into a resistant world, and as the coolest-looking dude to ever dive off a roof.

“As an artist I know him intimately as an ironic subversion of fascism, as a symbolic metaphor for authentic being-in-the-world, as my longest source yet of bread and butter, as my greatest professional old flame, as my astral alter ego, as an ancient dark hero archetype, as pure escapism, and as the Zorro we must all become to save the planet.

“He exists only in our imaginations, but the imagination is the lever by which we can move the world, and he’s still the coolest looking dude who ever dove off a roof.”