NEAL ADAMS MONTH: The Enduring Brilliance of a Classic

“When I decide to do halftones …”

Yesterday’s installment featured Harley Quinn #25, which was based on Superman #240. (Click here.)

Batman #232 was one of my earliest white whales, an elusive (and expensive) back issue that featured the first appearance of Ra’s al Ghul. I first saw the cover in the back of Limited Collector’s Edition C-51, (click here to read about that one). And when I really started hunting down back issues in my pubescence, this was the one that loomed largest (sorta like Ra’s there, I suppose).

Batman #232 and that tabloid cover are variations of the same metaphorical scene. The tabloid gives scope but the original shocks. And it’s helped by that bright, incongrous green and yellow… 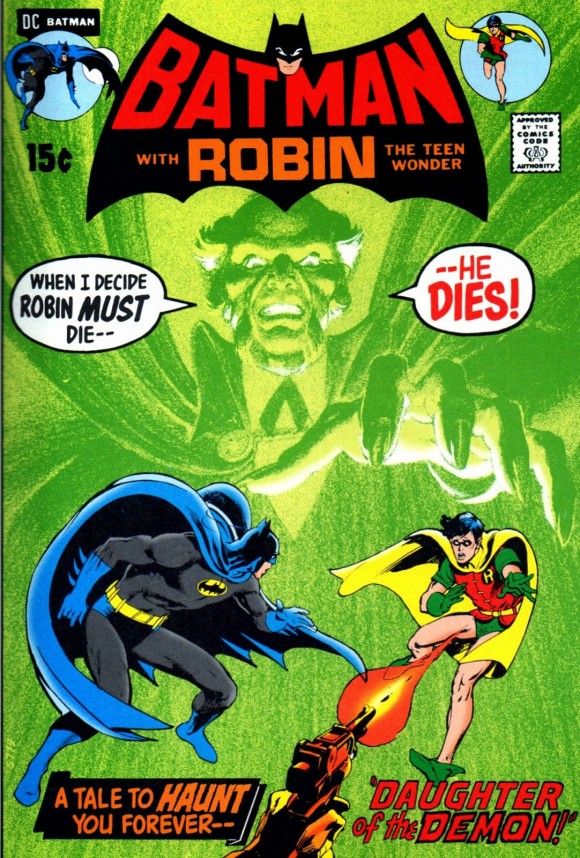 Dan Greenfield: Now this is also one of those covers for me which was a…

Dan: Well, just from a personal, emotional standpoint, this was one of those Holy Grail covers when I was a kid. I had, originally, the tabloid edition. (Click here to read about that one.)

Dan: This was one of the last Batman/Neal Adams covers that I was able to get my hands on and I absolutely love it. Tell me about how you did it and, of course, the choice to make it Martian Manhunter and Wonder Woman and Superman.

Neal: When I was at DC Comics, it was sorta like I had come from the future. ‘Cause first of all, nobody experimented. Nobody knew anything. It was a bad time in comic books. I mean, if you go back to when EC Comics was printing comic books, there were characters that would be done in dropout. …There was a character, Man in Black (published by Harvey). It would be this purple character printed in a dropout. It was done by Bob Powell. It was a mystical kid of character. He would be, like Dr. Fate or somebody. And he was done in dropout of purple. Red and blue. (Read more about him at Steve Thompson’s Four-Color Shadows. — Dan) 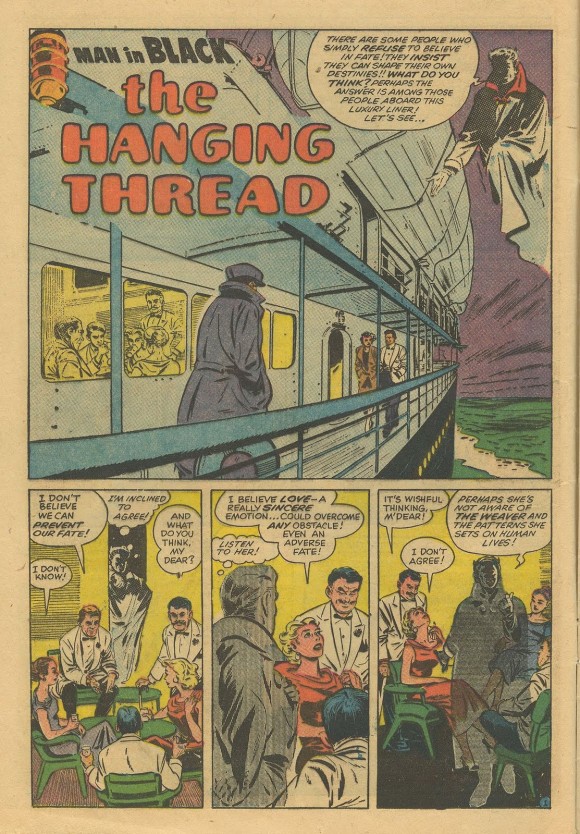 (Those) guys were technologically well ahead of stuff in comic books but then when we hit the crunch, (NOTE: The ’50s comics witch hunts and aftermath —Dan), when things happened, everybody forgot everything, everybody walked away from everything. Nobody did anything. So I knew stuff because I had done an awful lot of advertising. So I knew how to do dropouts and how to do other things. So I would go into the production room—’cause that’s the only people I could talk to.

There was Jack Adler in there. Jack Adler was a very good production man. He did all the color separations on all the covers and he did ‘em with a unique style nobody else could do. He did ’em with washes, okay? Still, they came out crude because the printing was so bad at DC Comics. … So there’s Jack Adler, OK, and I would say, “You know, Jack, I wanna do a steel engraving effect.”

“Now Jack, I wanna do a pencil drawing and I wanna turn it into a steel engraving.”

“I know what halftone screens are.” 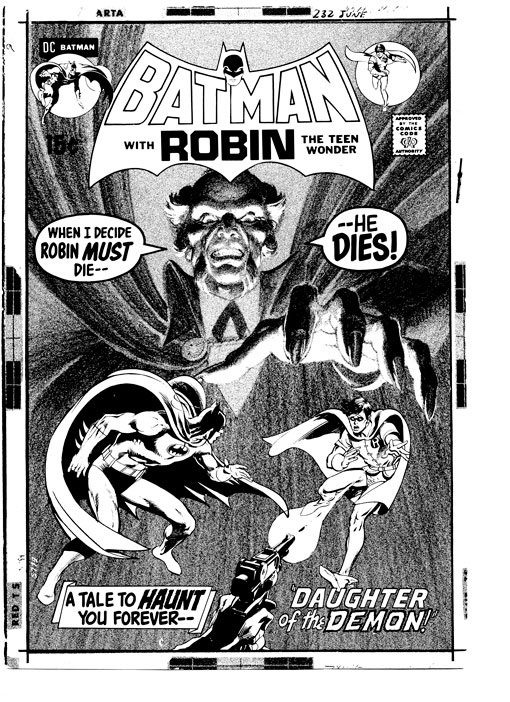 So he got an envelope of five or six screens that he put in the Photostat machine, so I’d give him a pencil and he would do a mezzotint or a steel engraving screen of my pencil drawing. It’s like a miracle!

“Now then, Jack, we can then take that and do a dropout in green over a yellow.”

“So I can have a fading picture in the background and it’s like a pencil drawing with detail and modeling and all kinds of stuff and it doesn’t matter how bad the reproduction is because you’re doing halftone screens. They can’t ruin it!”

So this cover was done that way. This cover (indicates Martian Manhunter #5 — inked by the great Tom Palmer, by the way) because we’re in computers, there’s no mezzotint and there’s no steel engraving screen so they had to fake it! (Dan laughs) 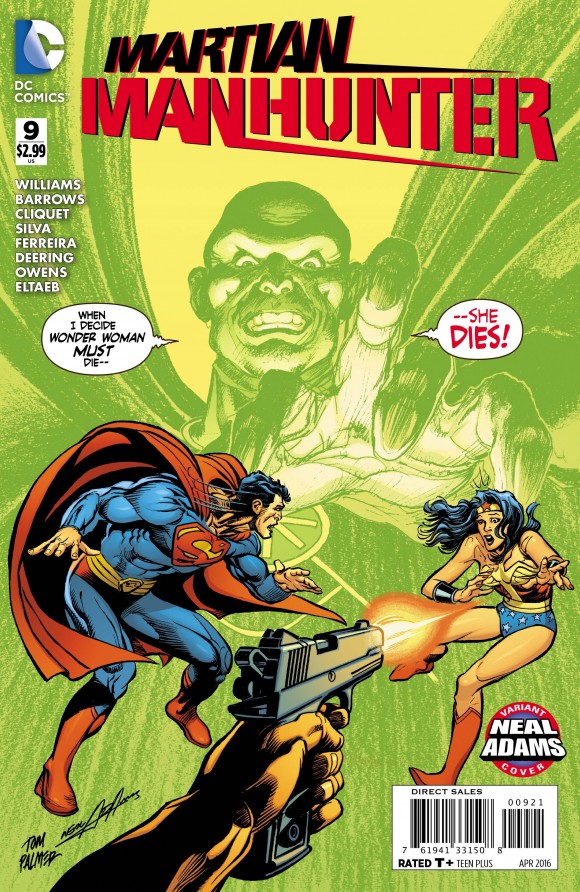 Pencils by Neal Adams, inks by Tom Palmer and colors by Dave McCaig

They had to fake it. Same thing with the first one. It’s faked. So there’s three covers here (including Robin: Son of Batman #9, click here) that are technologically retarded based on technology that hasn’t re-caught up to the computer! But given the problem, I think they came up with a good cover.

Dan: It’s beautiful. It really is. And it’s also the counter-intuitive selection of the characters. I know it’s just for the covers, but it is fun and it’s also shocking. The idea of Wonder Woman…

Dan: No bullets and bracelets there. 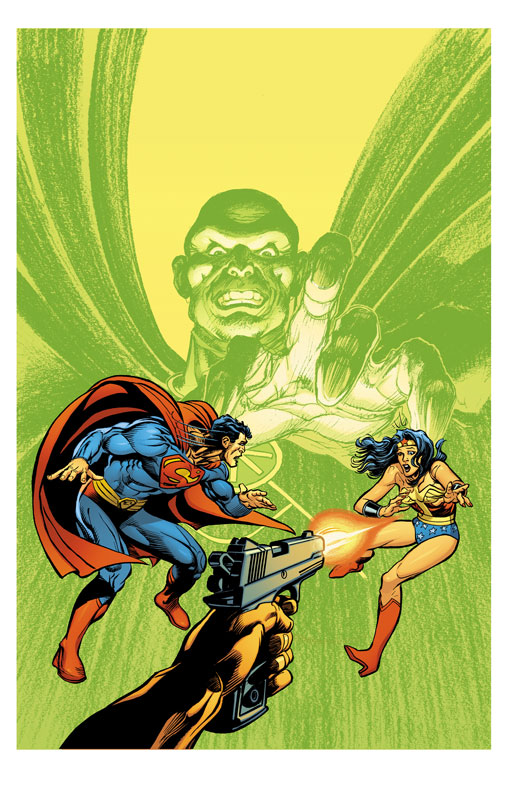 Neal: More than a young teenager (like Robin) being shot, a woman being shot (is shocking). And Superman standing there and not preventing it.

Dan: And not even knowing how. I do like that you used your Coming of the Supermen red shorts there. A lot of fans are going to be happy to see those red shorts back. 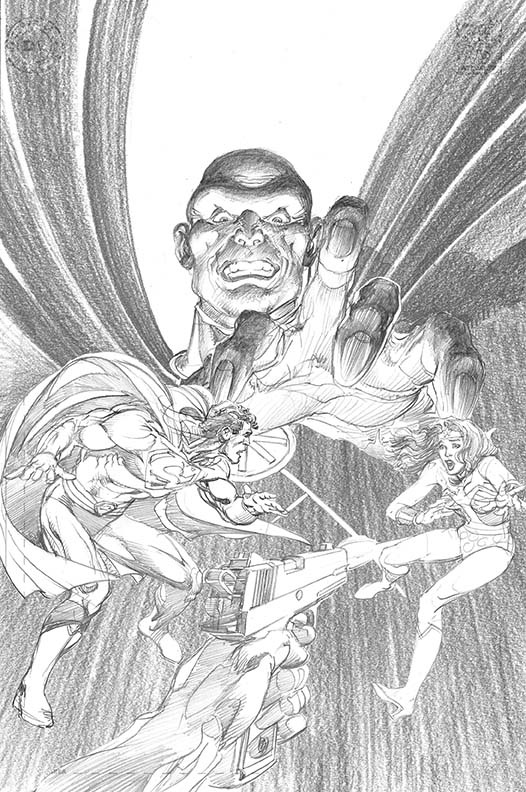