EXCLUSIVE COMMENTARY: Adams had a lot on his mind when he re-did the classic cover to Brave and the Bold #85.

It’s NEAL ADAMS MONTH here at 13th Dimension, and we’re featuring daily commentary by Adams on his variant-cover project for DC Comics. Each of his 27 variants is a twist on one of his famous covers from the past. He provided the pencils, and the inks and colors were handled by some of the biggest names in the business like P. Craig Russell and Frank Miller.

For yesterday’s segment, on The Brave and the Bold #84/Action Comics #49, click here. 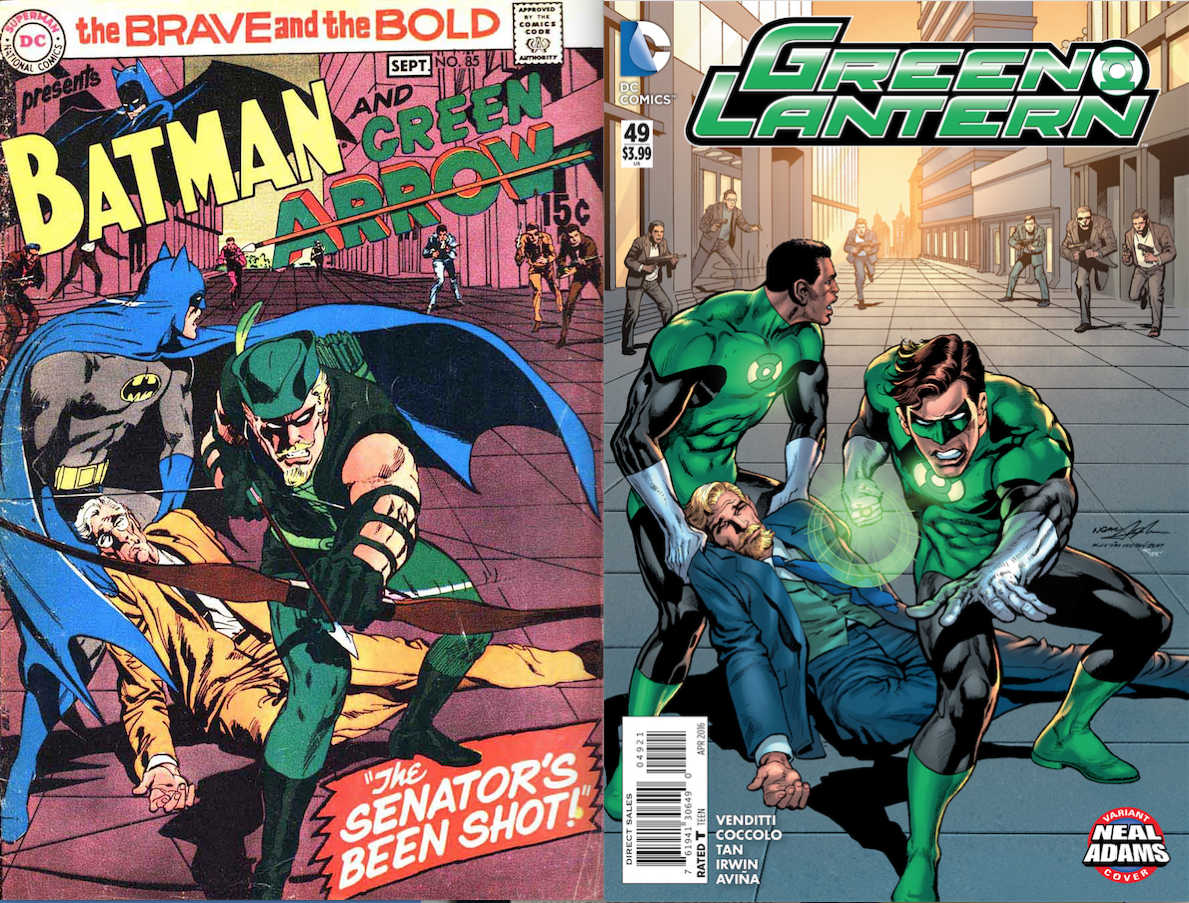 Dan Greenfield: Green Lantern #49, based on Brave and the Bold #85. This cover, I’ll just interject here, is, of course, the Green Arrow…

Neal Adams: “The Senator’s Been Shot!”

Dan: … with the first time you see the modern, classic version of Green Arrow.

Dan: I remember when I was a kid that this was one of the most sought-after covers that you could get. You know, in the growing collector’s market (of the ’70s). I remember when I finally got it, I was, like, “I finally have it!”

So you mix this up by having John Stewart in the Batman position, Hal Jordan in the main position and then you have Ollie as the one who’s been shot with all these other guys.

Neal: He became the senator. 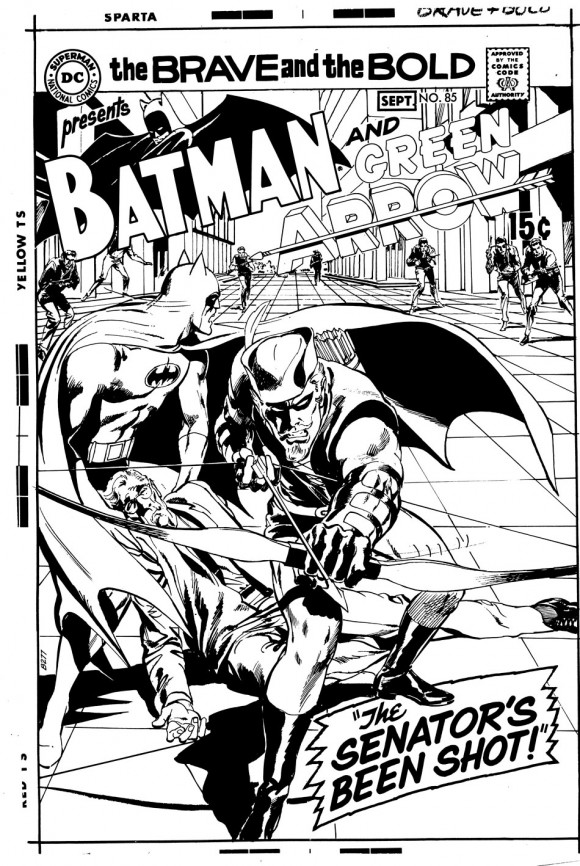 Dan: Right. So tell me about your…

I said, “You know, I don’t wanna do that. I really, really don’t wanna do Green Arrow because he’s a copy of Batman. He’s got the Arrowcar and he’s got Speedy. It’s a blatant rip-off of Batman.”

And Murray, his eyebrows went up and he’s, like, “Really?”

“Yeah! Don’t you know that? It’s one of those givens!” I said, “Can I change it? Can I change the character?” 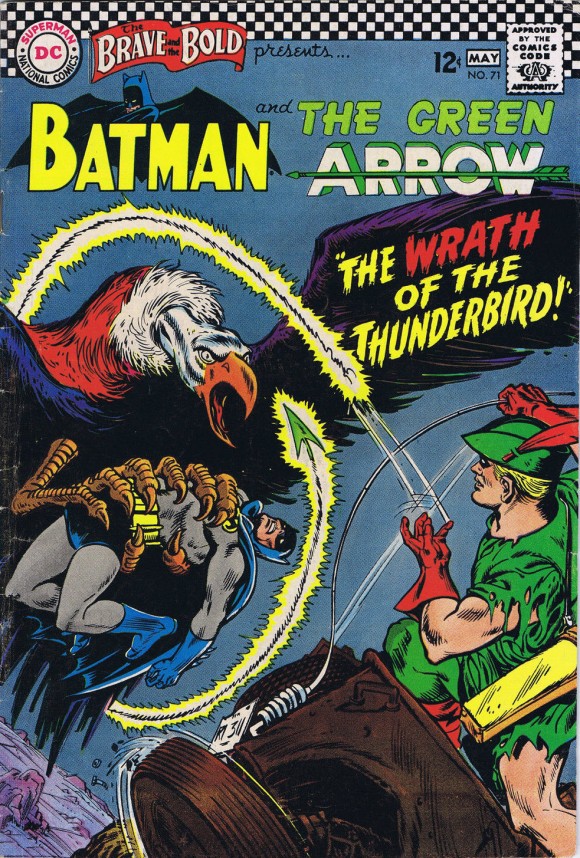 And he kind of went, ”Sure. I’ll have Haney just throw in a couple of lines.”

Now, the idea was, not to change the character because I see that done all the time and it’s the same character. The idea was to misdirect the audience… There weren’t that many people that gave a damn about Green Arrow. … He was a takeoff of Batman but nobody cared. It wasn’t like anybody said, “Oh, let’s think about this.” Nobody thought about it.

So if I make him a modern-day Robin Hood and use Robin Hood as my touchstone, nobody will think about Batman. And that was the goal. That was the whole idea, here. So that’s what I did. In the story … I made him the foil. 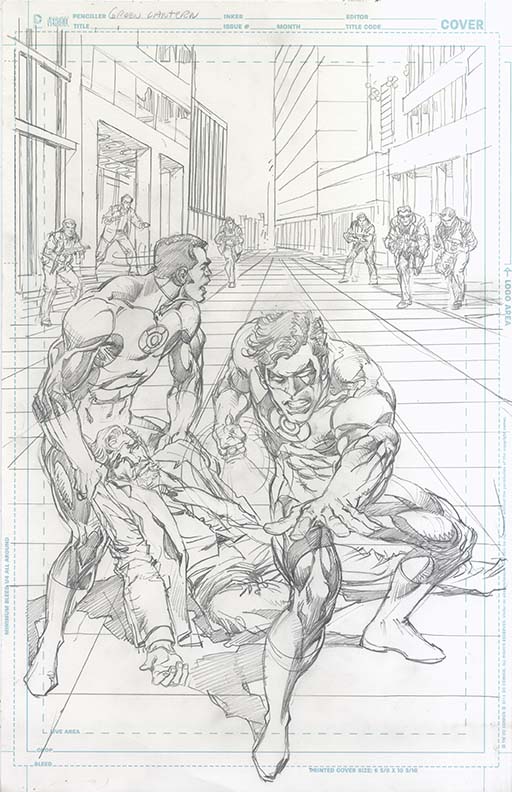 John Stewart is the first black superhero who is a college graduate and has a profession. … I wanted to get him on that cover to take the place of Batman who I consider to be the paramount character at DC Comics. So here was the perfect opportunity to just rotate that little turntable and put him onto a prominent position on there to remind everybody that John Stewart — Hal Jordan may be the greatest Green Lantern of all and we still need to save him a little bit — but John Stewart is the next one. Not anybody else. 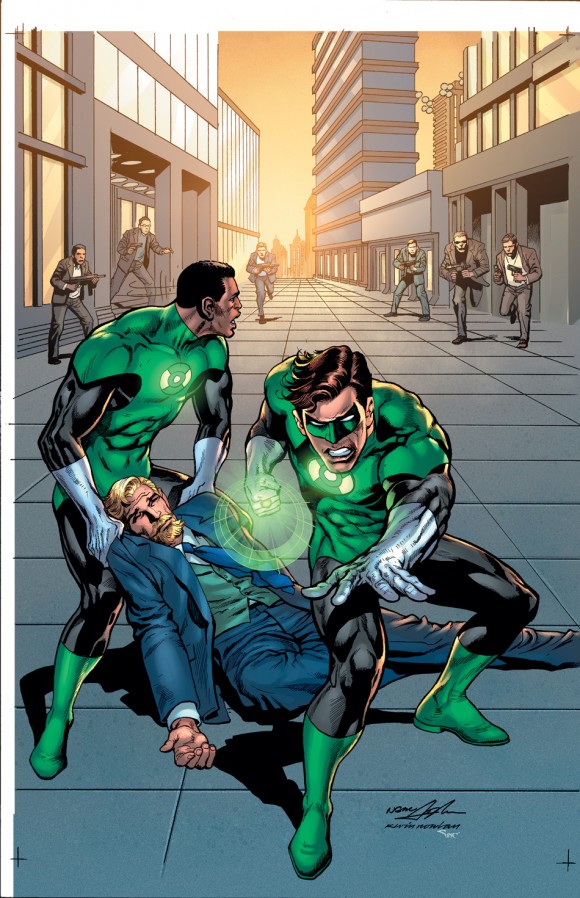 Dan: Last week, when they did a TV show that was promoting their slate of movies, they strongly implied that the next Green Lantern movie is going to be about Hal Jordan and John Stewart. The Green Lantern Corps.

So this is that entry. That is the open door for all cultures in my opinion…

NEXT: The Secret Origin of the Neal Adams Variant Cover Project. (Click here.)