One of modern animation’s greatest writers pays a Halloween visit…

Paul Dini knows a thing or two about cartoons. After all, he was a major architect of the groundbreaking Batman: The Animated Series, which is just one highlight of his illustrious career. (Oh, OK, you want me to list more? How about Superman: The Animated Series, the Justice League series, Arkham video games, Detective Comics, Dark Night, Jingle Belle, the World’s Greatest Super-Heroes treasuries and on and on…)

Anyway, Dini’s channeling his love of all things animated with Boo & Hiss, a new graphic novel with art by Dave Alvarez that’s inspired by classic adversarial cartoons like Tom and Jerry. The twist? The cat gets the mouse — and then is tormented by the little bugger’s ghost. Dini’s crowdfunding the project through Kickstarter and you really oughta check it out here. He calls it “probably the most bizarre story I’ve ever told.” 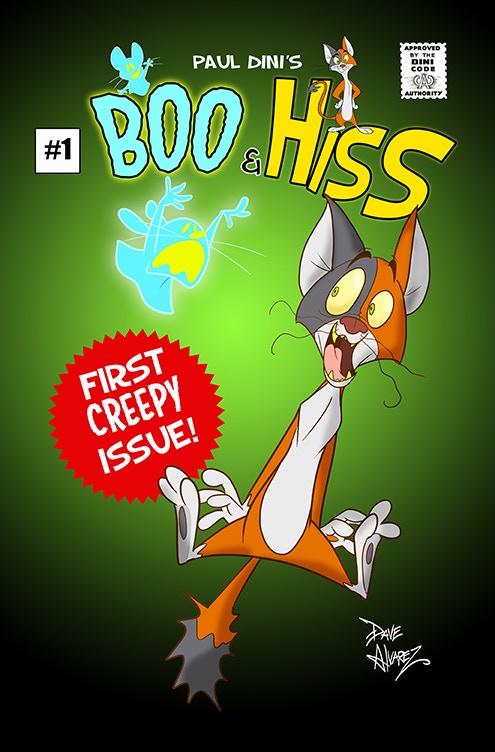 But now check this out: Halloween’s upon us and given the ghostly nature of Boo & Hiss, Dini’s put together a must-see list of 13 Great Spooky Cartoons that you should be tracking down right now.

Halloween has always sparked the imaginations of animators who have, over the years, produced a boo-tiful bounty of great cartoons starring ghosts, witches, demons, and the hapless mortals running in fear from them. With that in mind, here’s my personal list of spooky cartoon favorites for Halloween party viewing, or anytime you feel like having a good shudder:

1. The Mad Doctor (1933). Mickey Mouse braves a haunted castle to stop a crazed scientist from carving up Pluto for his experiments. Lots of grotesque imagery in this one, tempered somewhat by its “only a dream” ending. 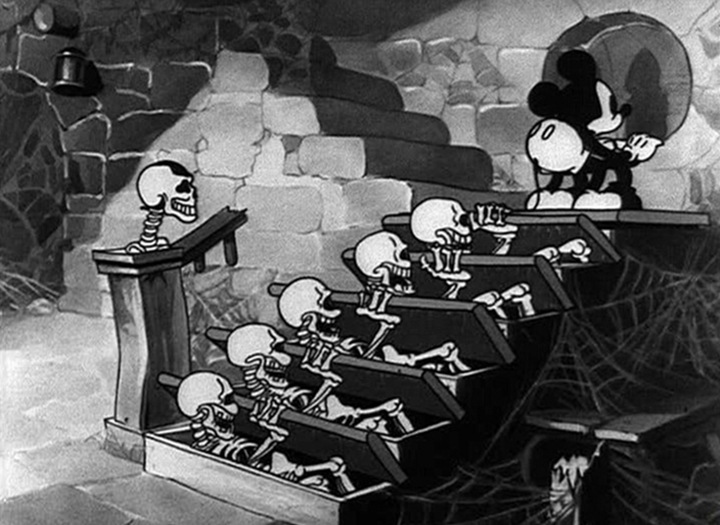 2. The Tell-Tale Heart (1953). This spine-tingling UPA entry comes with a distinguished pedigree, starting with its origins as a famous short story by Edgar Allan Poe. It was narrated by James Mason, produced by Mr. Magoo creator Stephen Bosustow, and co-written by Bill Scott, writer and voice of Bullwinkle Moose. The layouts and stunning paintings are by acclaimed background artist Paul Julian. 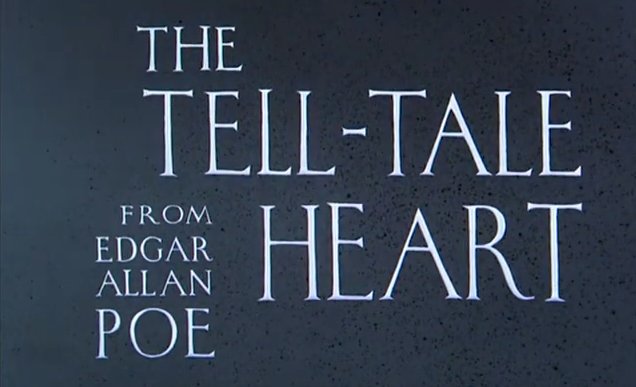 3. Trick Or Treat (1952). Disney’s web-footed star should bill himself as Donald Dick in this cartoon. He puts lit fire crackers in his own nephews’ treat sacks, douses them with water and still doesn’t fork over any candy. Fortunately a dizzy, though kindly Shakespeare-quoting witch named Hazel (voice by the legendary June Foray) is around to even the score. Donald deserves every bit of punishment old Hazel doles out, and then some. 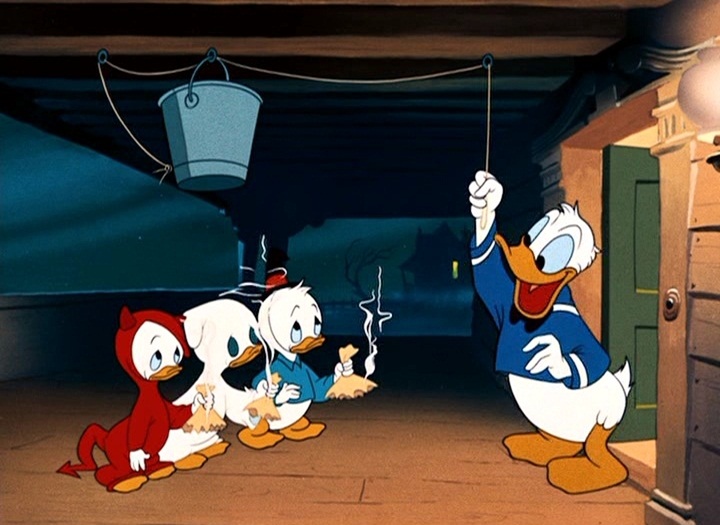 4. Swing You Sinners! (1930). Steal a chicken, go to Hell. It’s as simple as that in this tuneful, toe-tapping offering from director Dave Fleischer. 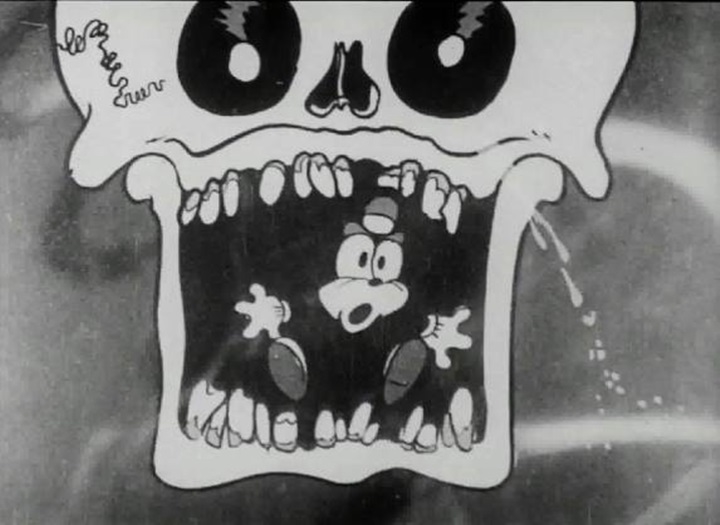 5. The Legend of Sleepy Hollow (1949). This Disney classic boasts the song The Headless Horseman and Ichabod Crane’s terrifying encounter with the sword-wielding ghost as the cartoon’s great set pieces. 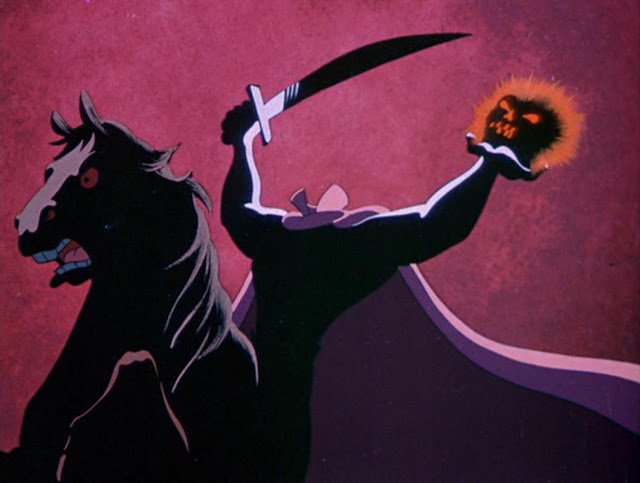 6. Broom-Stick Bunny (1956).  Another character named Witch Hazel and another great performance by June Foray. Nothing kindly about this Hazel though as she tries to destroy Bugs Bunny several times in this cartoon, first when she thinks the costumed hare is a rival ugly witch, and then when she discovers she needs a rabbit’s clavicle for her brew. Bugs wins by using Hazel’s own spiked tea to transform her into a glamour girl, a fate worse than death to a witch who prides herself on always looking her worst. 7. Alma (2009). The most recent film on this list, and the most disturbing. An unnerving masterpiece by former Pixar animator Rodrigo Blaas, this story of an unwitting little girl in a strange doll shop will have you screaming “Don’t do it, kid!” almost from the get-go. Supposedly there is a feature version in the works from Blaas and Guillermo Del Toro. I can’t wait! 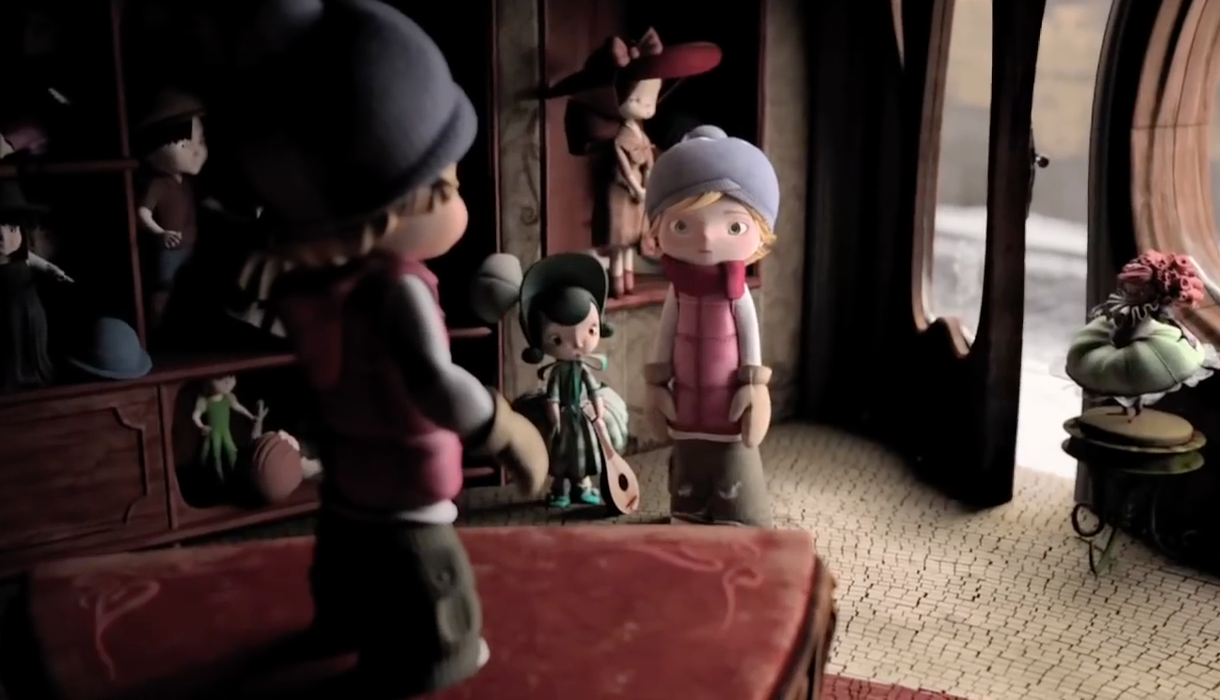 8. Scaredy Cat (1948). Warner Animation director Chuck Jones knew a good thing when he had it, and he struck gold with a mini-series of cartoons starring Porky Pig as a dim tourist waltzing through horrific situations with a mute Sylvester along as his terrified pet. This first entry is arguably the funniest, with Sylvester having to summon his courage to rescue Porky from a mansion filled with murderous mice. 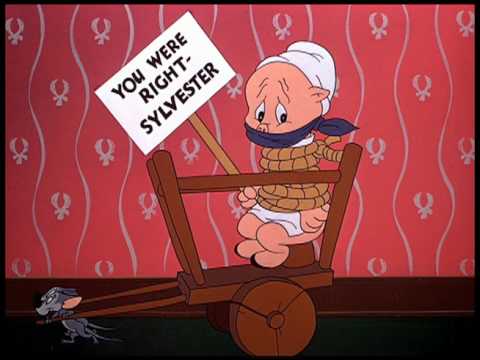 9. There’s Good Boos To-Night (1948). The second Casper the Friendly Ghost cartoon ever made is a creepy heartbreaker. Casper becomes friends with an adorable baby fox who is then shot by a cruel foxhunter. A devastated Casper grieves for his dead friend, but the little fox returns as a ghost, and all is right again – I guess. (I could use some good boos myself after this cartoon, like a stiff shot of Buffalo Trace.) 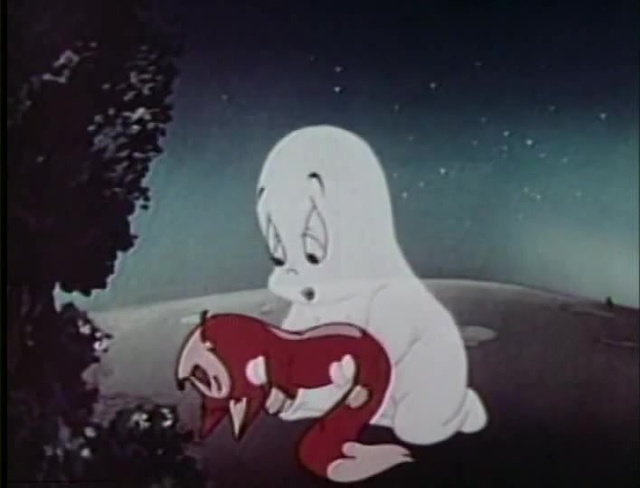 10. Vincent (1982). The seeds of both Beetlejuice and The Nightmare Before Christmas can be seen in Tim Burton’s early stop-motion homage to his hero Vincent Price, narrated by the master of horror himself. 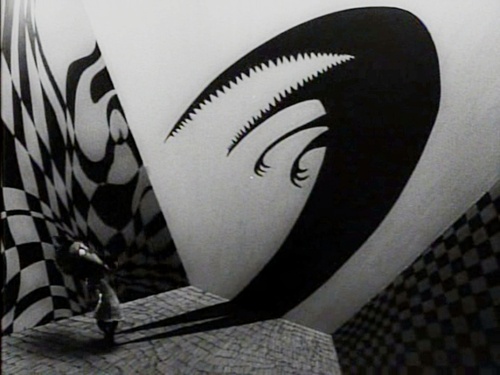 11. Shiver Me Timbers (1934). Popeye, Olive Oyl and Wimpy get trapped aboard a ghost ship. Lots of Popeye mumbling and Wimpy gluttony. Good times. 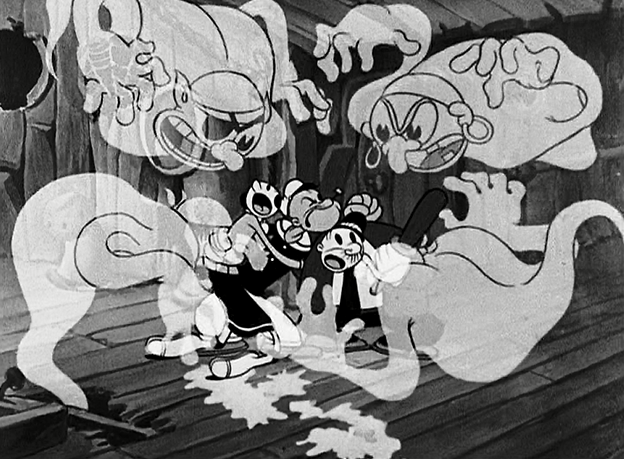 12. Lonesome Ghosts (1937). Spook exterminators Mickey, Donald and Goofy vs. a quartet of wisenheimer wraiths. Best gag: when Goofy stares at a grinning ghost in a mirror, then confides to the audience: “Fer a moment ah thought it wasn’t me.” 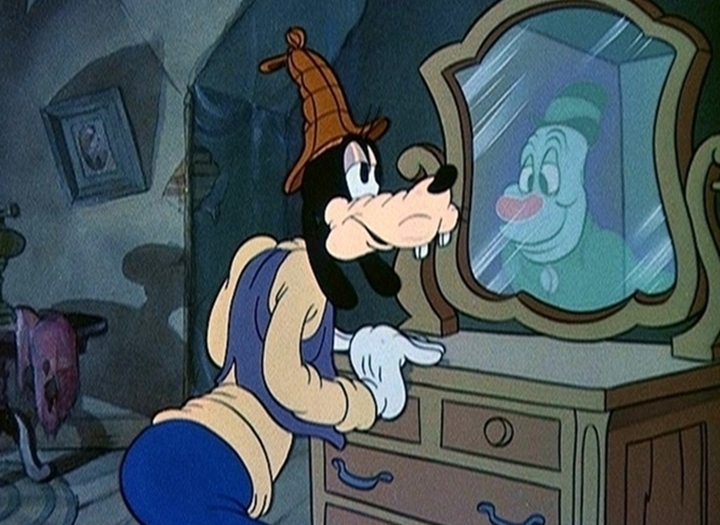 13. Betty Boop’s Hallowe’en Party (1933). There were several candidates for a Betty cartoon on this list. Certainly there are scarier moments in The Old Man of the Mountain and Minnie the Moocher, while most of Red Hot Mama places Betty in Hades, where she entertains a company of devils with a fiery version of Hell’s Bells. However, Halloween Party wins for its surreal animation and vivid now-vintage Halloween imagery. 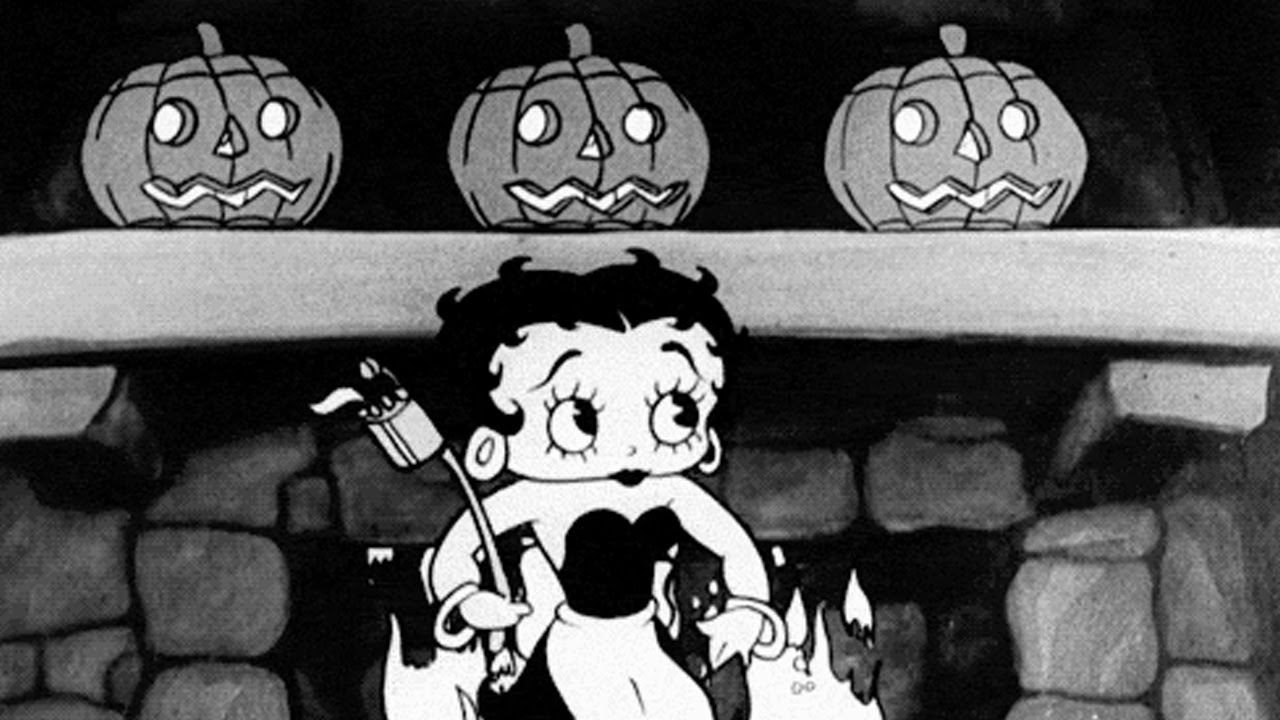