Music for Your INDOCTRINATION

Home » PREVIEWS » Music for Your INDOCTRINATION

Indoctrination just debuted from Z2 Comics, and writer Michael Moreci (Roche Limit) and newcomer Matt Battaglia have put together the perfect playlist for you to listen to while reading their supernatural political thriller. Plus! A SNEAK PEEK at Issue #2 out 7/27 — and a link to listen to the playlist on Spotify… 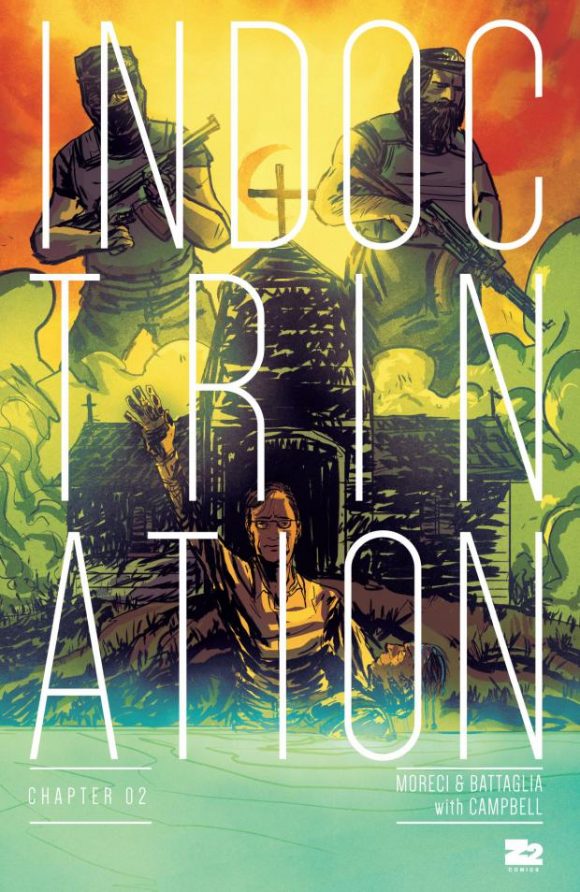 By MICHAEL MORECI and MATT BATTAGLIA

Indoctrination is a book that focuses on a set of characters who all suffer from having pushed aside their connections to broader society. Our protagonists are all deeply searching for a connection, even if they don’t know it. We’ve selected the following tracks because they relate to that common human journey — or because they are songs from the albums and artists we typically spin during our work sessions, like Bruce Springsteen’s The River, Run the Jewels, Jason Isbell’s Something More than Free, Southside Johnny and the Asbury Jukes’ Soultime, Little Steven and the Disciples of Soul’s Men Without Women, Credence Clearwater Revival and Jesse Malin’s New York Before the War. These songs all hit a similar note — loneliness. But more importantly, they’re all about the quest to figure out how to get out of it — how to find a connection in the world, and the importance of people in your life. 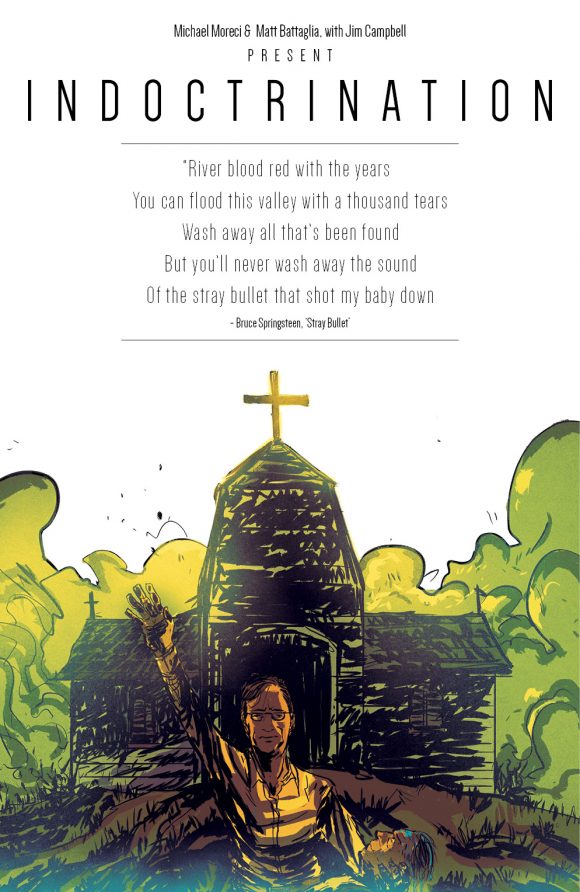 Michael Moreci: This song is like watching a storm roll over the horizon then allowing yourself to be consumed by it. It’s dark, foreboding, and pretty damn scary.

Michael Moreci: I fell in love with Lera Lynn after her work on True Detective. I discovered this track and immediately thought of Trent, the Indoctrination co-protagonist.

Don’t Run Our Hearts Around, by Black Mountain

Michael: This is just chaos. Like Young Men Dead, it sounds like it was recorded in a saloon–I love songs that sound dirty like this. There’s a certain rawness that gives it an edge that you don’t find in music anymore. It’s like the music is being made in a hidden world, one outside our sparkling-clean world of machine-engineered pop. That dark undercurrent is, for obvious reasons, perfect for Indoctrination.

Run Through The Jungle, by Creedence Clearwater Revival

Michael: You want to talk about cults and brainwashing and all that, you have to have this Creedence Clearwater Revival track. It sounds like the story of someone trying to escape something horrible that they’ve seen or been part of. I would not want to be the person running through the jungle, let me tell you. 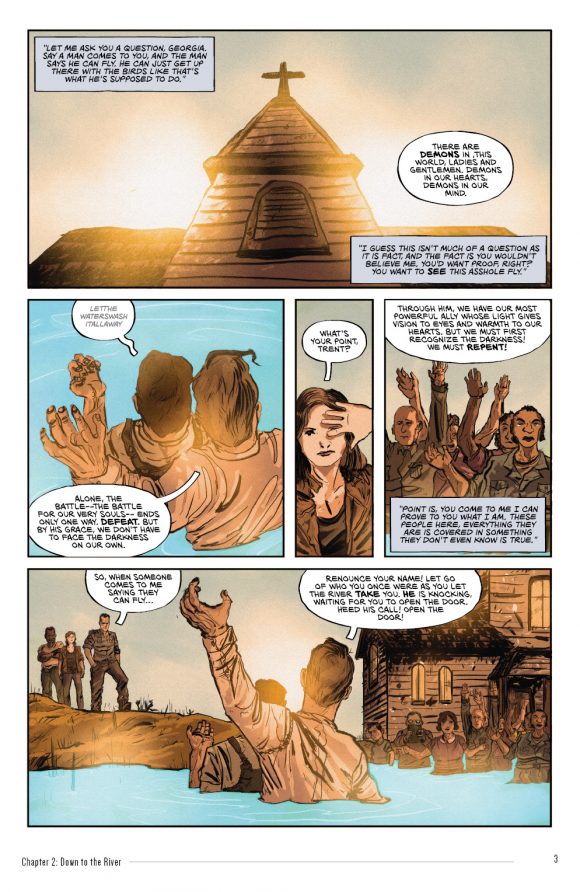 Michael: I can’t do much politically without Run the Jewels popping up somewhere. Them or Flobots. Both have been all over Indoctrination and my previous, politically charged book, Burning Fields. This song, specifically, was the soundtrack to a crazy, craaaazy scene that happens in Issue #2. I wanted something dark and sinister, and this song delivers.

The Circle in the Square, by Flobots

Michael: Flobots are the heir to Rage in so many ways–I love their politically minded lyrics, and their message of unity, resistance, and peace. It always brings me the kind inspiration I need to write something like Indoctrination. 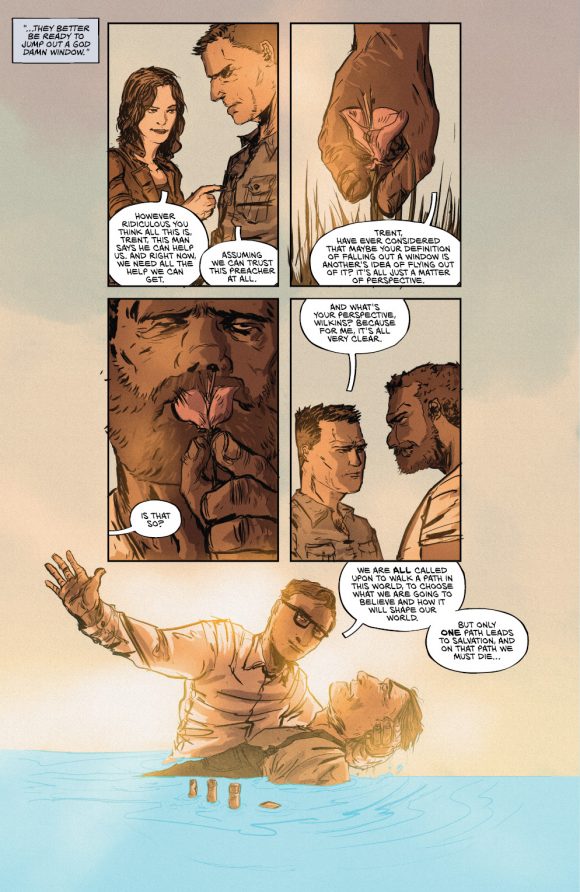 Michael: Something about the mania of this song is so perfect for the book. What’s happening? What’s GOING to happen? Indoctrination, believe me, is full of crazy surprises.

Ain’t No Grave, by Johnny Cash

Michael: Dark, determined men and women. Johnny Cash. Nothing else needs to be said! 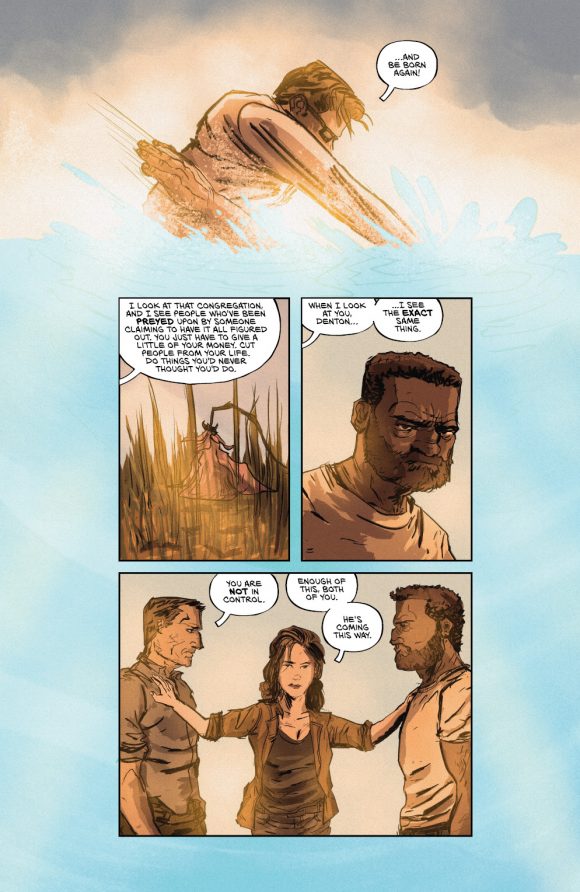 The Ties That Bind, by Bruce Springsteen

Matt: You can swap in basically any Bruce song. But The River has been in heavy rotation of late, what with The Ties That Bind box set. Some of those outtakes are fantastic. Bruce is, generally speaking, my favorite musician.

Something More than Free, by Jason Isbell

Matt: Jason Isbell’s latest record is fantastic, but you can really listen to any of his stuff — it’s all great. I saw him at the Beacon last time he came through NYC — and he puts on a heck of a show. Although since finding Here We Rest on vinyl — I’ve been spinning that even more — side one is just killer. 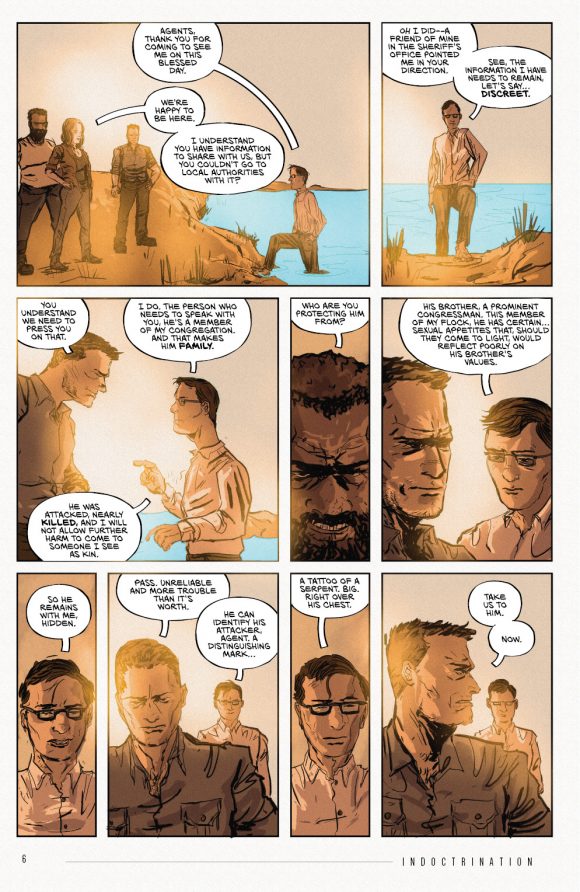 I’m Not That Lonely, by Southside Johnny and the Asbury Jukes

Matt: My favorite track off Southside Johnny and the Asbury Jukes’ latest album. Southside’s something of a Jersey legend, old school soul and R&B, rock n’ roll, with a ton of horns. Really the best kind of music.

Men Without Women, by Little Steven and the Disciples of Soul

Matt: Completing the Jersey Holy Trinity, the title track from Little Steven and the Disciples of Soul’s first record. This album’s got to be in my Top 10, it’s pretty much a perfect record. Also of note, Southside did a live cover album of it — which is also pretty damn amazing. 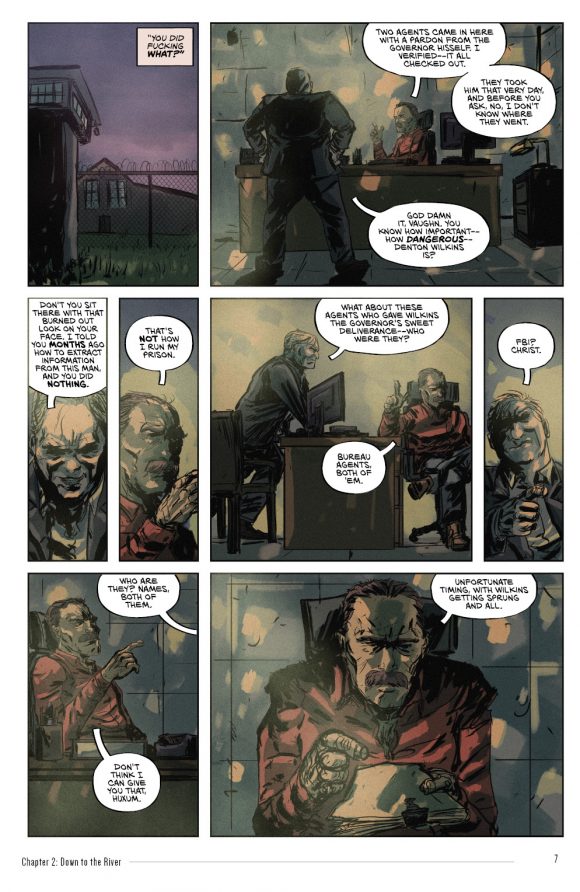 Matt: Jesse Malin’s another really solid rocker, and Bar Life is a perfect late-night wind-down tune from the album New York Before the War. It’s a great album, and a regular in my lineup.

You can check out the playlist on Spotify, here.