David Petersen’s Mouse Guard has an intensely loyal following and on 6/29 fans can get a fresh look at their favorite fantasy world done up in … Legos. (Or, officially, toy bricks.)

Mouse Guard: Art of Bricks, from Boom! Studios’ Archaia imprint, features a variety of tableaux done up in hard plastic and from what I’ve seen, the result is as inventive as Petersen’s world.

The constructions were by Alice Finch and the ArchLUG Architecture Group in Seattle. (The minifigures are by Guy Himber with Dave Ingraham.)

Anyway, we invited David to walk us through the book and pick his 13 fave pix… (Photos by Alice Finch, courtesy of Archaia/Boom!) 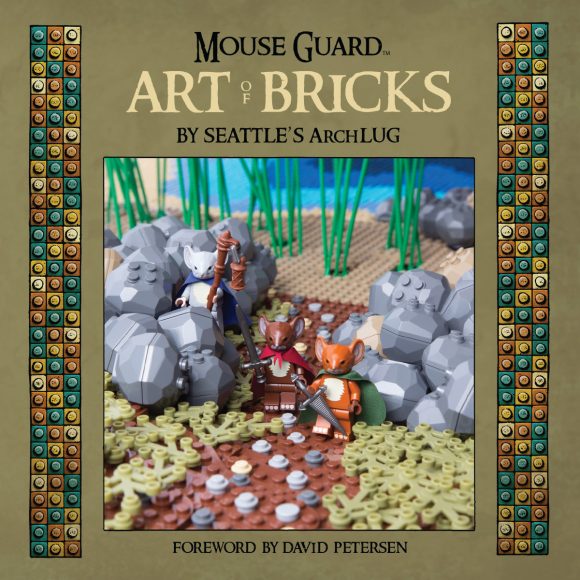 1. Trio Sculpture. The sculpted quality of this picture is what makes it unique in the Art of Bricks book. And the inclusion of the book as a base, showing the material came from someplace in those pages, warms my heart. (Pgs. 16-17.) 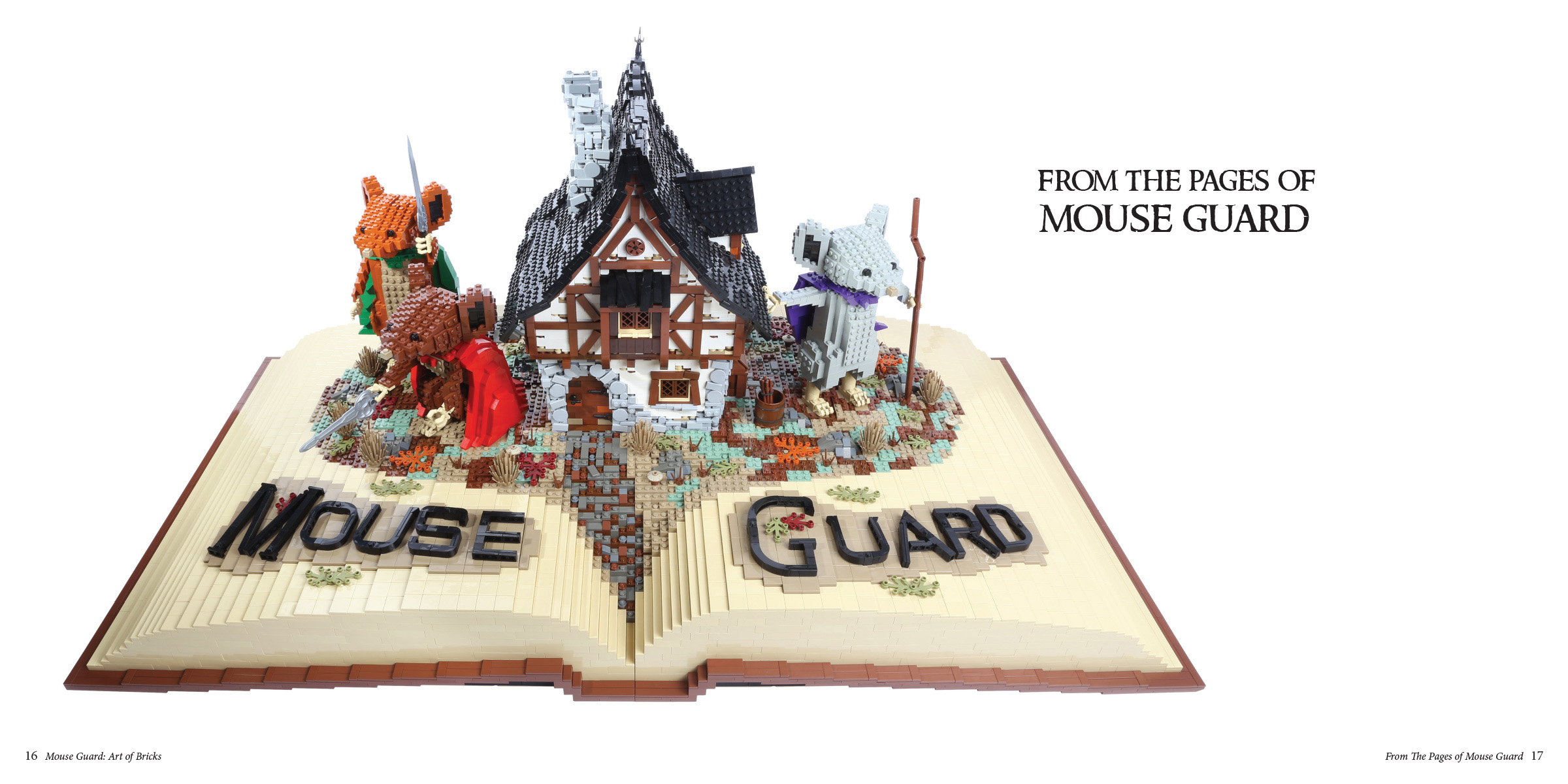 2. Lieam vs. Owl. This photo re-creates my Winter 1152 Issue #5 cover so well. The sense of scale, how on Earth does Lieam survive this confrontation? And the bloodshot, wounded eye of the owl (a trick I used so that readers would know it was the same owl from Issue #1 of that series) may be creepier in Lego form. (Pg. 38.) 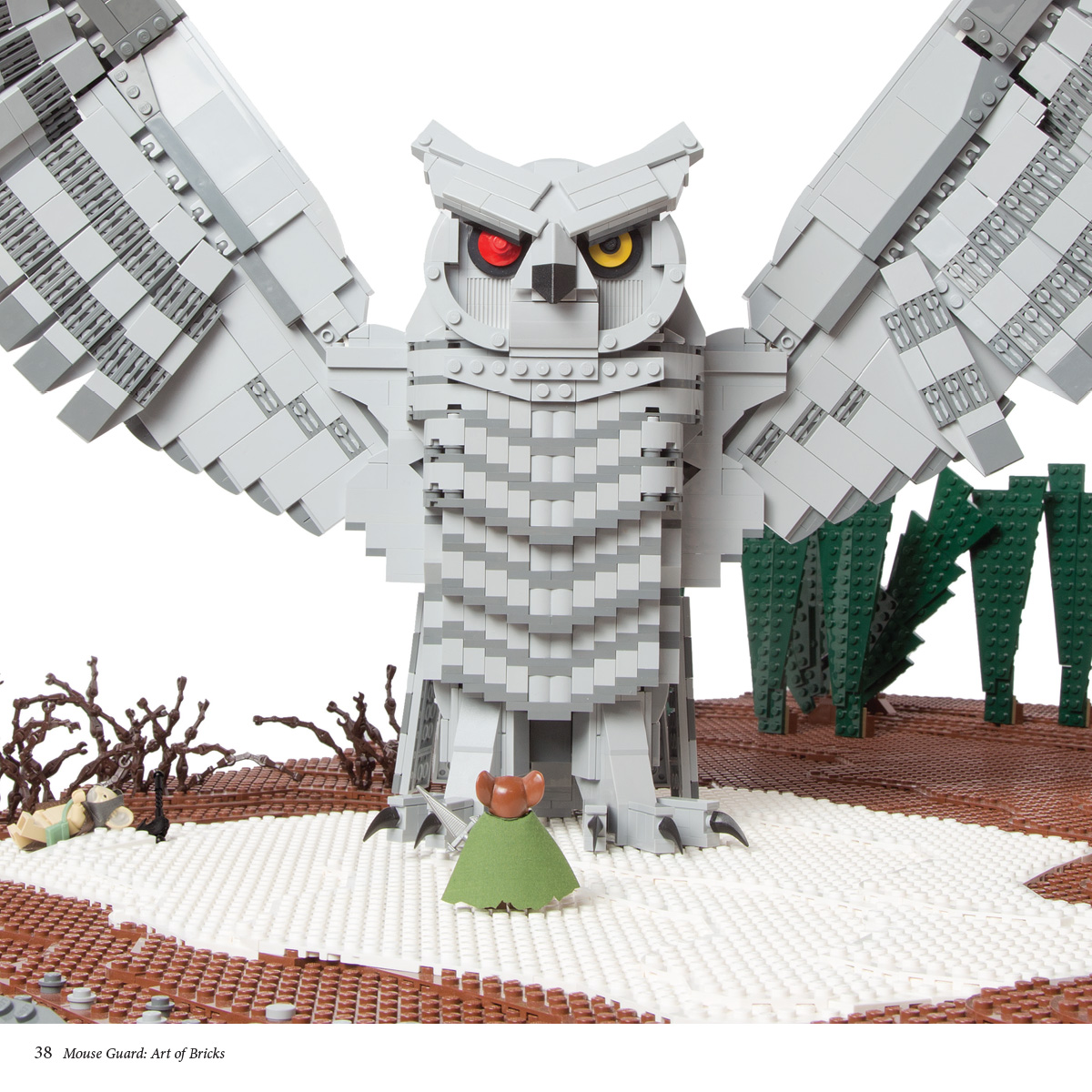 3. The Mariner’s Bell. I designed this mouse tavern to be a “wretched hive of scum and villainy” for The Black Axe series. Here in brick form, it seems all the more treacherous a watering hole with that winding staircase, exposed balcony, and deafening bell. (Pg. 167.) 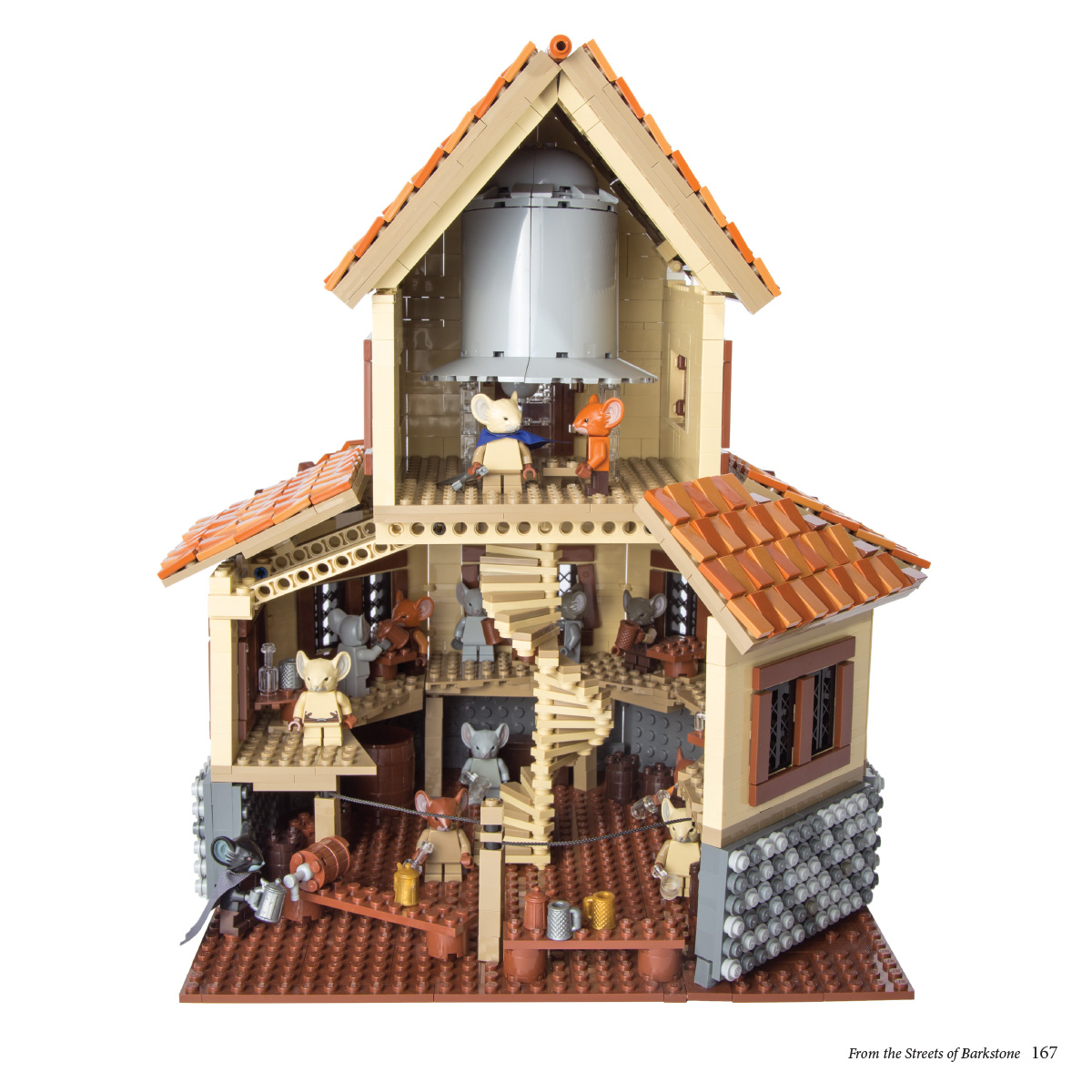 4. Feather Knighting Room in Thistledown. Alice Finch did a wonderful job of building the room from my Feather Knighting print as the same Easter-egg laden archive of objects. I went over the print with Alice so she’d know all the references back to Mouse Guard and Legends of the Guard stories. The desk with the cubby holes in Lego is particularly impressive. (Pgs. 178-179.) 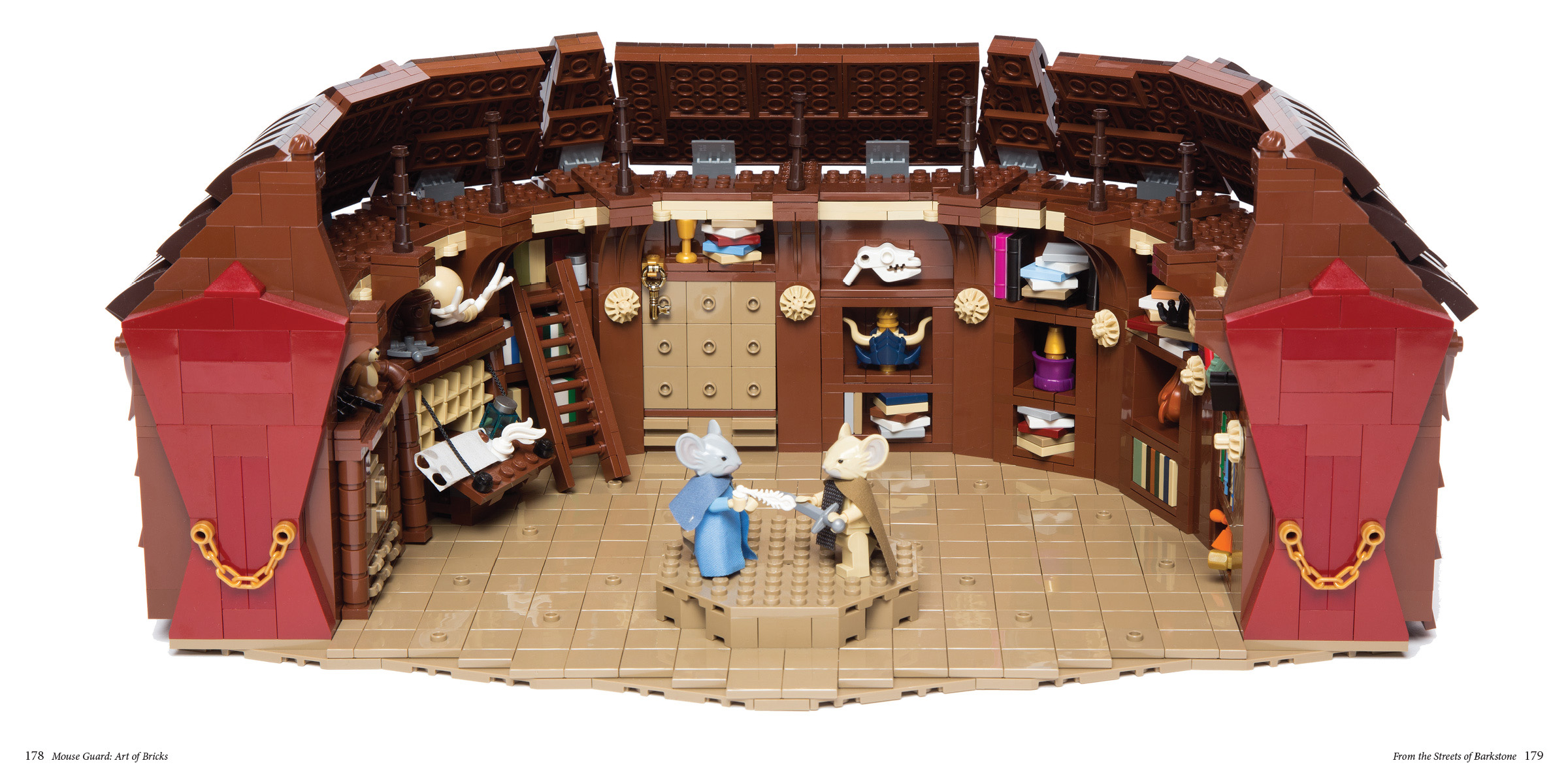 5. Celanawe Minifig. I try not to have a favorite preference with my own characters, but I do seem to keep coming back to Celanawe (who held the mantle of the Black Axe for most of his life), so how can I not find a custom mini-figure of that character one of the 13 best photos from The Art of Bricks? The cloak, hood, pauldron and belt/sash were all made for this mini-figure, as was the axe, to match the character’s appearance at the end of The Black Axe series. (Pg. 216.) 6. Seascape. A landscape that includes Calogero being attacked by crabs (from Mouse Guard: Fall 1152), Celanwe riding on Duckback (The Black Axe), Frostic and glimpses of the bustling Upper and Lower Port Sumac. You can even faintly see the final moments of Celanawe’s appearance from The Black Axe series on the cliff. (Pg. 69.) 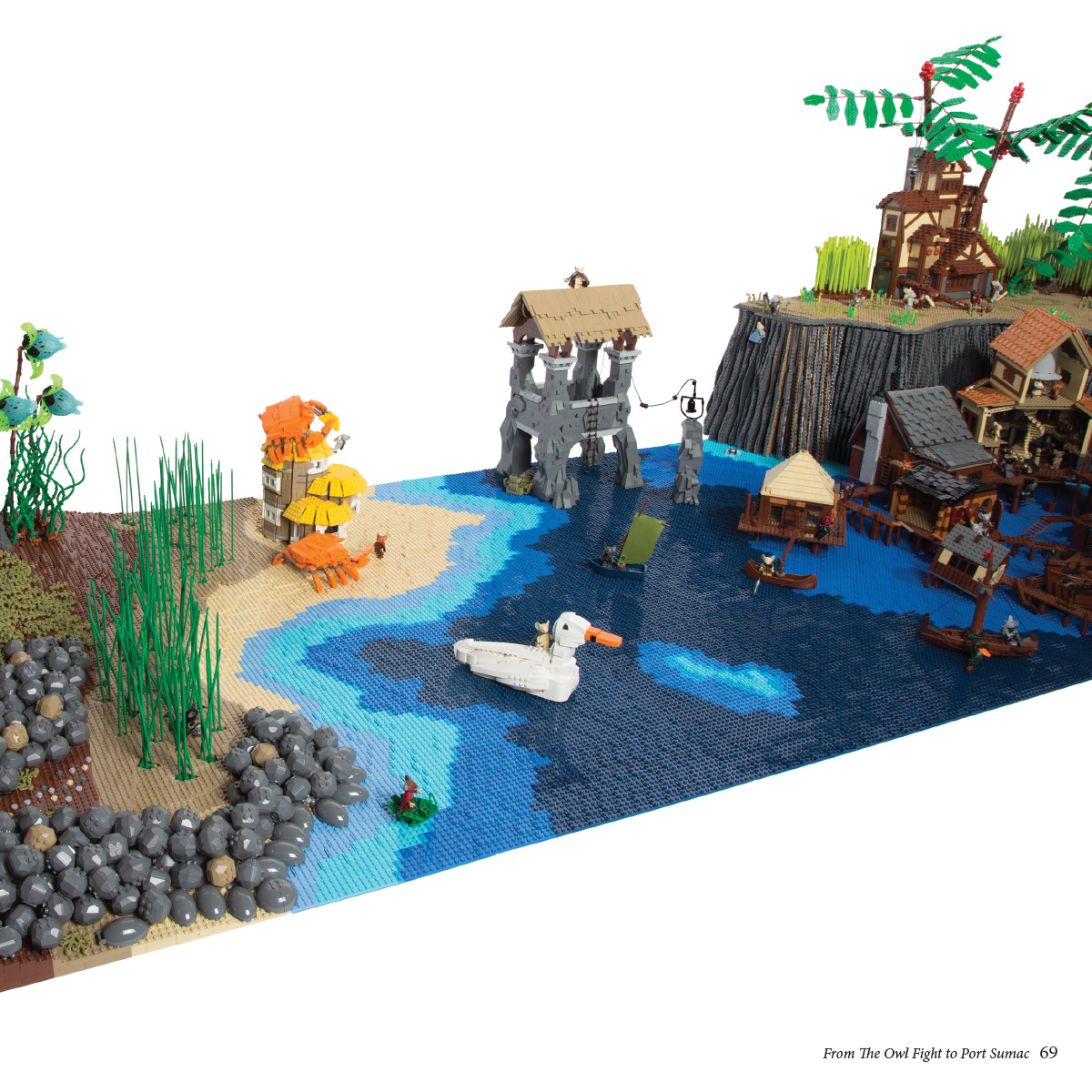 7. Leaf Boat. Mice using leaves as boats—not bad when I draw it, all the more adorable and charming when fashioned out of bricks. (Pg. 71.) 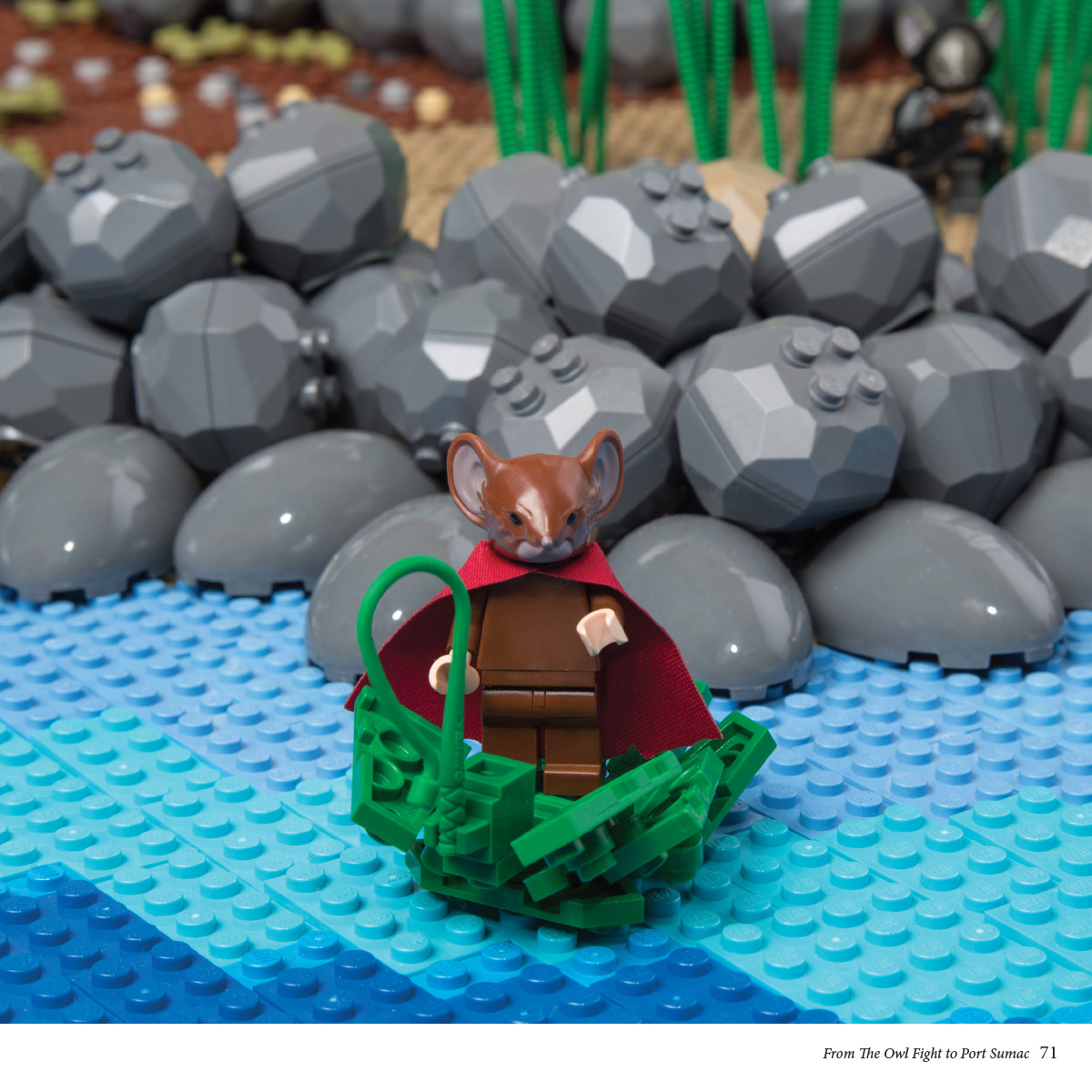 8. Barkstone. What an amazingly dense concentration of Lego architecture. I love all the patterns of shingles and beams and stonework to make each structure look unique while also fitting into an overall aesthetic. I struggled drawing this view of Barkstone for the Fall hardcover extras…and here it all is in brick laid out for us. (Pg. 92) 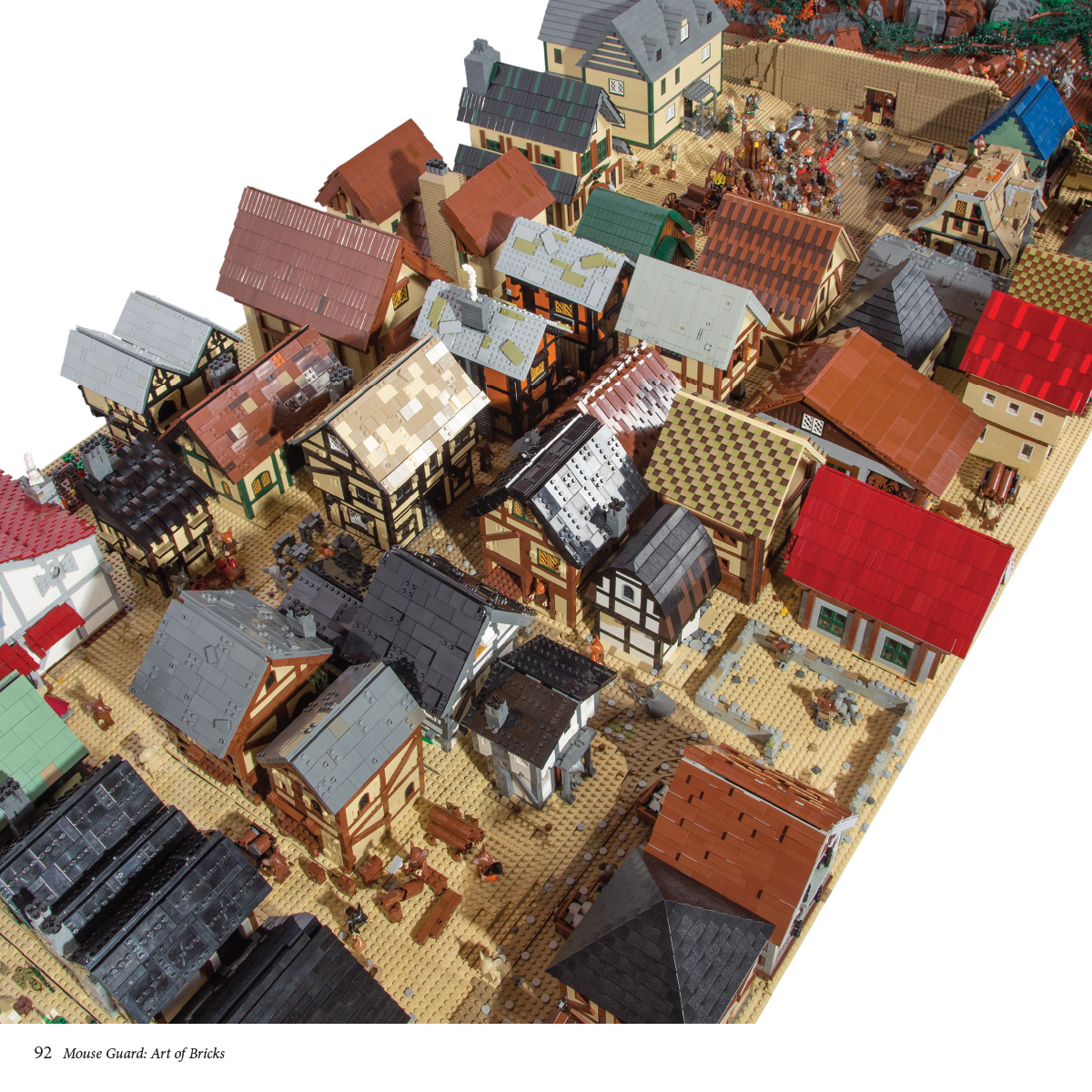 9. Town Mice or Guardmice. I do not know who these mice are or what the building is behind them, but the framing of this photo, and the elegance of the minifigs’ clothing make me want to write and draw stories about them. (Pg. 118.) 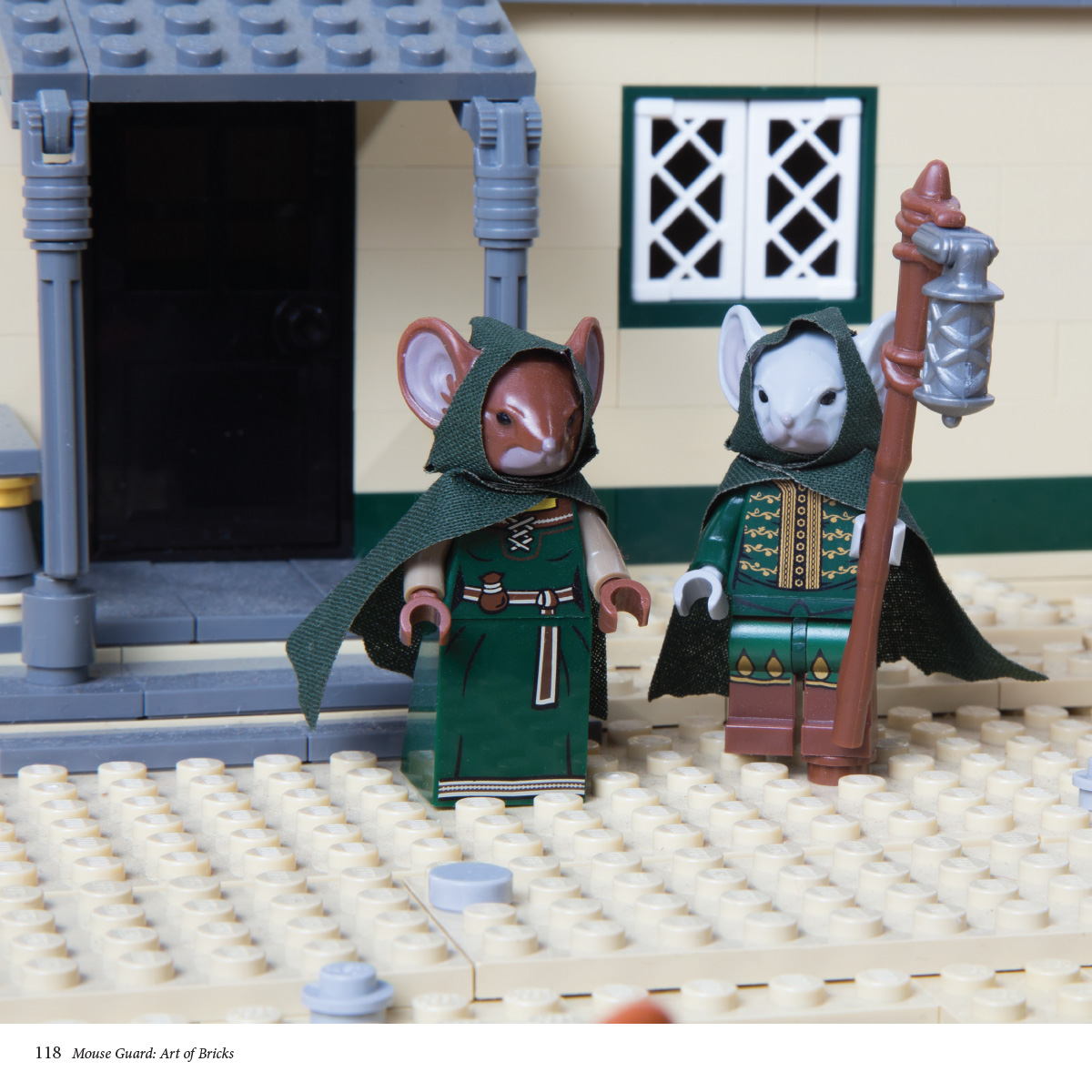 10. Conrad’s Ship: The Red Snapper. “Across the sea to a foreign land for a season and a day…” Celanawe, Em and Conrad on their quest off the edge of any mouse map in search of the mythic Black Axe is all the more epic in studded ABS plastic. (Pg. 227.) 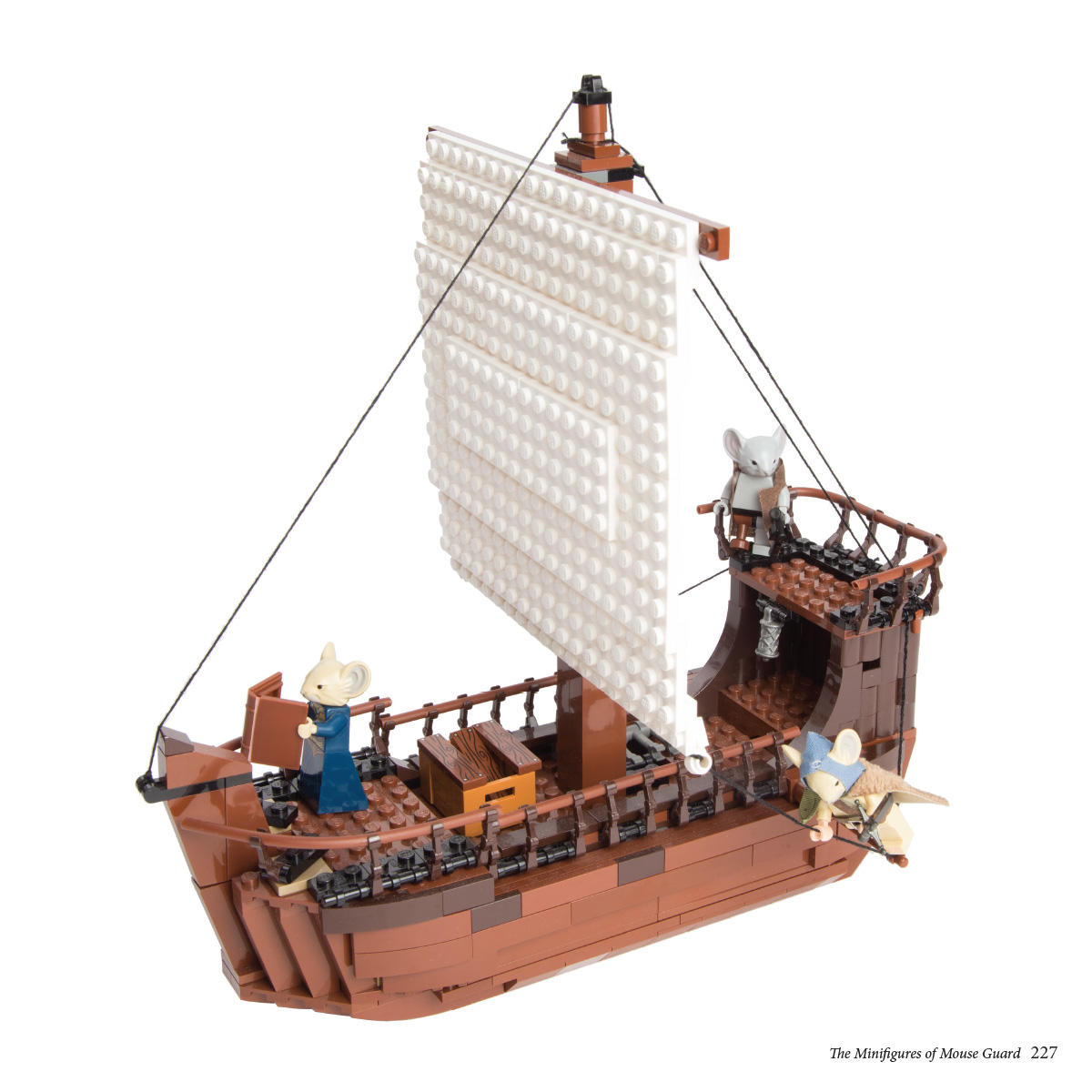 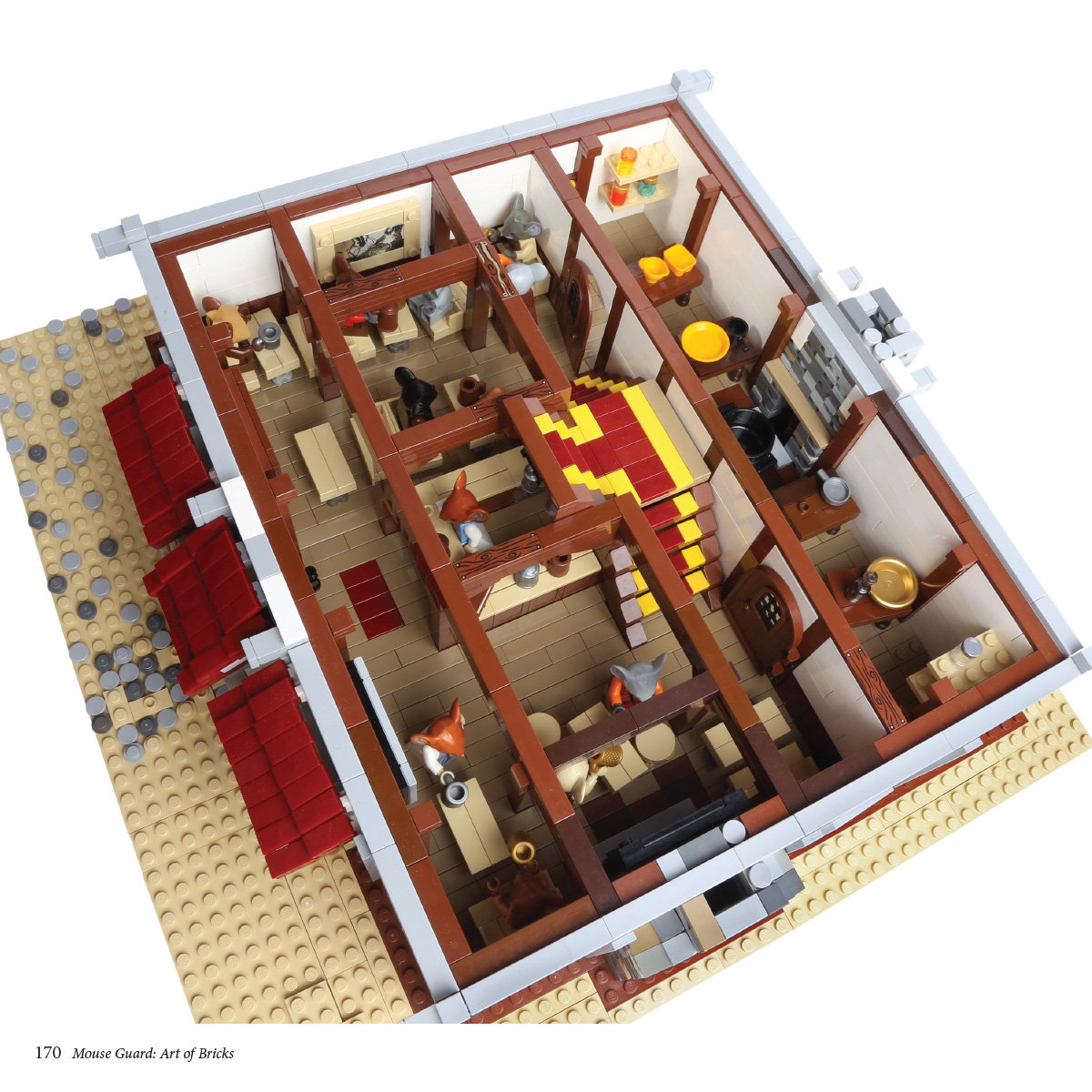 12. Lockhaven. The amount of bricks to just build the front facade of Lockhaven is staggering. The home of the Mouse Guard is well fortified in Lego, but still minifig Midnight and his army have raised axe and spear against the Guardmice. Archers stand on the parapets, and Saxon, Kenzie and Celanawehide in the undergrowth, ready to defend their home. (Pgs. 134-135.) 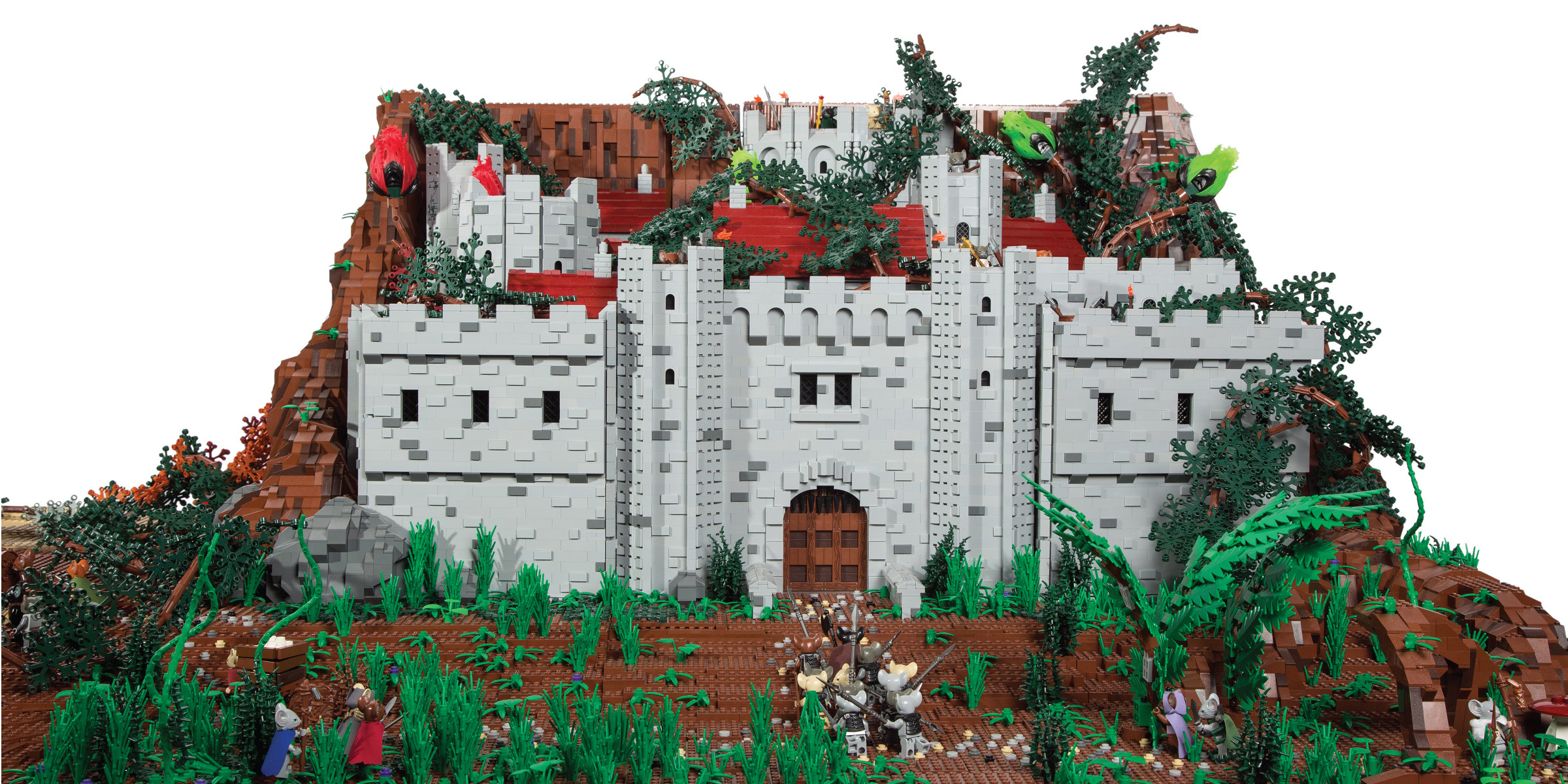 13. The Shorestone Archive. Inside the impressive Lego Shorestone (a city I designed to be architecturally complex and beautiful), Alice Finch built in scenes and interiors from The Black Axe series. Here, Celanawe speaks to the archivist Arkin to learn more about the clandestine society the Haven Guild, who know the Black Axe’s lore and secrets. (Pgs. 186-187.) 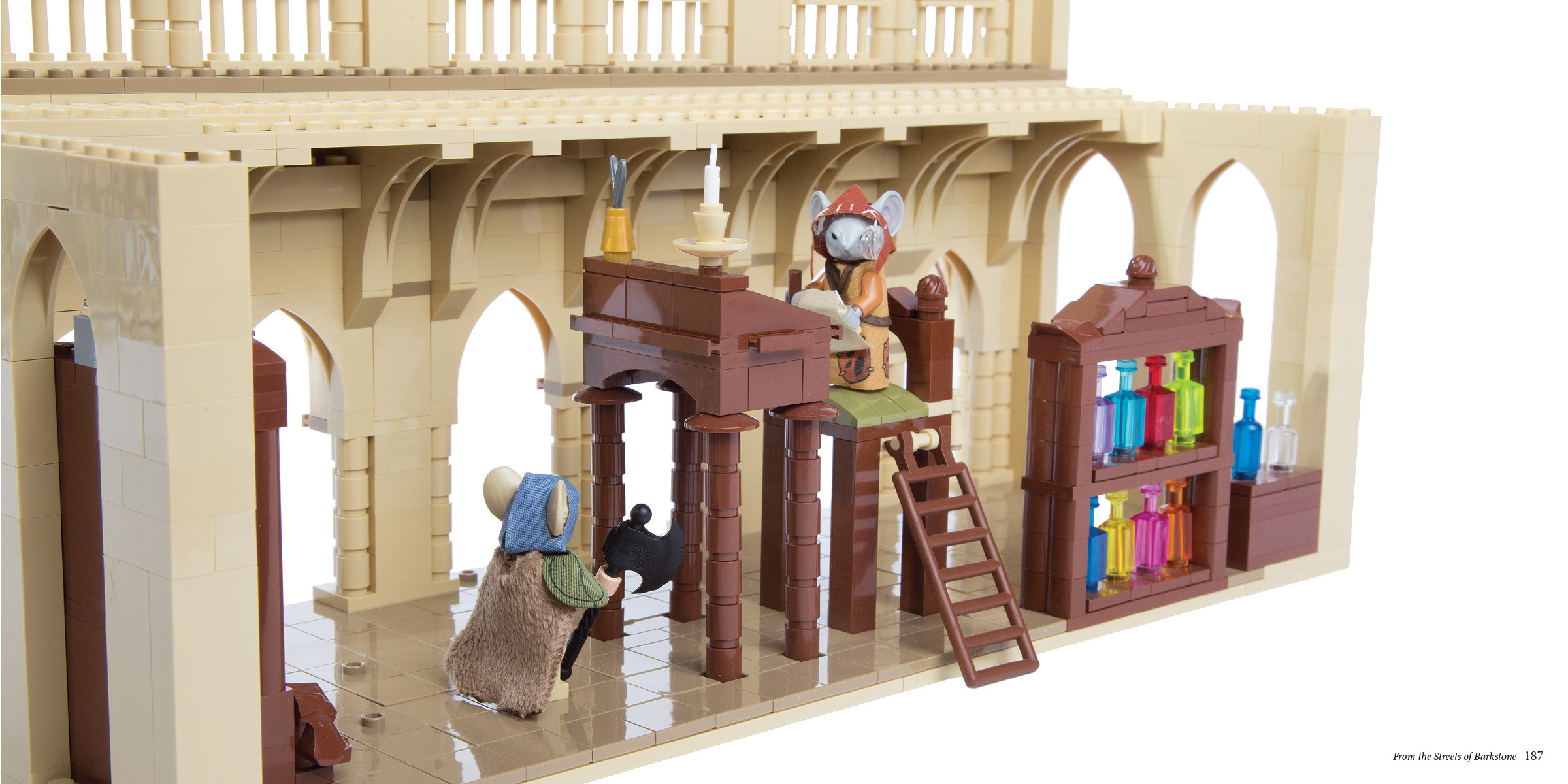