More SEX AND VIOLENCE From Palmiotti, Gray and Co.

Jimmy Palmiotti, Justin Gray and the PaperFilms crew are launching a new Kickstarter featuring two of our favorite topics. 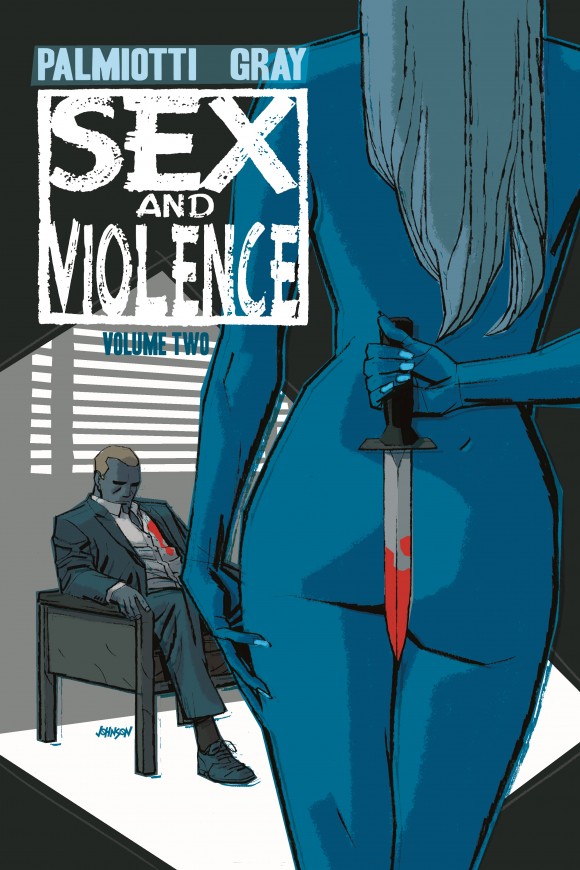 “Our goal with the SEX & VIOLENCE books is to deliver provocative stories in the tradition of HEAVY METAL and classic European crime comics. For the sequel to the first SEX & VIOLENCE graphic novel, we wanted to up the stakes even more,” said Palmiotti. “Make no mistake, this is a book for Mature Audiences with lots of nudity, crazy situations, suspense and surprises. There’s a reason it’s called SEX & VIOLENCE.”

The first short story is written by Palmiotti and illustrated by Romina Moranelli. “Daddy Issues” is about a seductive mother and daughter that have a connection and a goal they share, at any price. “Giving any more away will ruin the story for you,” says Palmiotti.

The second story is “Red Dog Army” written by Justin Gray and illustrated by Rafa Garres. After conquering Poland in only 16 days, Hitler launched a full-scale invasion of Russia called Operation Barabossa. Stalin was desperate to halt the flood of panzer tanks headed toward Moscow. As a result he authorized a special unit to train and use dogs as anti-tank weapons. “Red Dog Army” is the story of aging dog trainer Yuri Schlonsky who was recruited into the army against his will and sniper Valeriya Petroff as they both try to not only survive the war, but also their deranged commanding officer who is doing everything he can to make certain they fail. “It’s absolutely epic,” said Gray.

The third story, “Filter”, is written by Palmiotti and illustrated by Vanesa R. Del Ray. The story follows the life of a Brooklyn-born killer named Nico Gallo. “Here’s a guy who made violent and murderous choices growing up on the tough Brooklyn streets. But don’t jump to conclusions,” says Palmiotti. “Nothing in this story is quite as it seems.”

“Working on a PaperFilms projects like SEX & VIOLENCE or DENVER is incredibly rewarding for us. Knowing that our audience supports our insanity really gives us a ton of freedom to absolutely let loose on these projects, and to make them even more special by offering exclusive art and prints,” said Gray. “We’re so grateful that our fans back our books and help us with our campaigns by posting, tweeting and spreading the word about this project.”

Rafa Garres studied at the Massana Art School and at the Faculty of Arts in Barcelona. He began his career in 1996, drawing covers for the Spanish editions of CONAN as well as the series Hombres y Bestias for Glénat. Since then, Garres has worked for publishers like DC Comics, Fleetway and Crusade and more, working on characters like Jonah Hex, Lobo, Slaine, Judge Dredd, Jaguar God, and the Spectre.

Romina Moranelli was born in Naples in 1981 and currently lives in Salerno. After attending the “Scuola Italiana di Comics” in Naples, she started working as a comic artist and illustrator. She contributed to the project “Women of Marvel”, published by Marvel Comics in 2010, and she collaborated with Disney Italia. She also illustrated “Jade”, a one-shot comic book for the French publisher “Clair de Lune” in 2013.

Justin Gray is an accomplished author who has written for every major American comic book publisher. In addition to writing graphic novels and comic books, he has also contributed to several best-selling video games, animated properties, and children’s fiction. Outside of the publishing world, Justin has been a fossil hunter, micro-photographer specializing of 20 million year old insects and plants preserved in amber, and an advocate for Victims Assistance of Westchester, a not-for-profit organization that assists victims of crime.

Jimmy Palmiotti, Justin Gray and Amanda Conner launched PaperFilms in 2001 to create a company for creators skilled in world building, screenwriting, intellectual property development, video game development, illustration, editorial experience and much more, as part of their efforts to own and develop their own characters for various media, while also nurturing a community for like-minded comic book creators. The company has successfully funded six books for Kickstarter: DENVER, FORAGER, QUEEN CRAB, RETROVIRUS, SEX AND VIOLENCE Volume 1 and WEAPON OF GOD.