Steve Orlando and Artyom Trakhanov’s Undertow takes a new look at the Atlanteans — and Steve invites us below for a taste of the salty brine before the launch this Wednesday, Feb. 19. 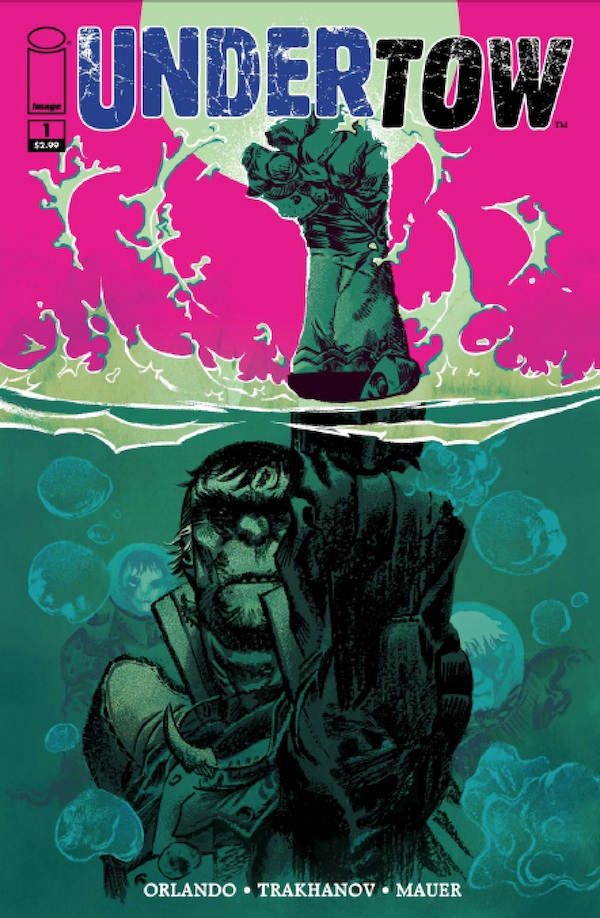 Clay N. Ferno: How long have you been working on this concept?

Steve Orlando: Undertow has been coming together in one way or another for almost four years. From early development as an underwater police procedural, it grew into something more, something less rooted in Dick Wolf story structures and more launched out of Jules Verne adventure. Artyom and I bounced around two years ago with some short stories, and when I told him what I was thinking about for a longer story, he was instantly sold on my strange fish people. 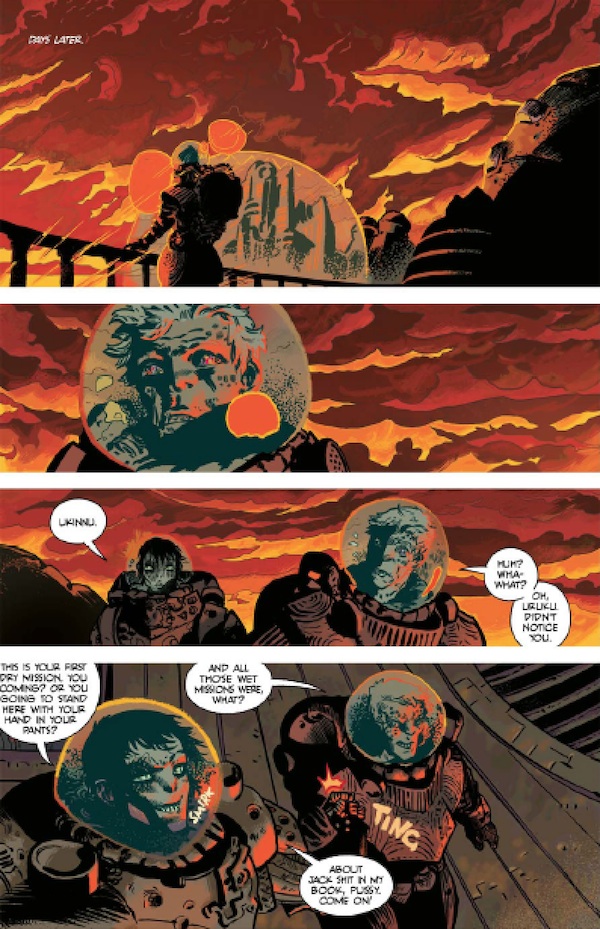 The feral humans actually can use tools, but that’s about as sophisticated as they get. Atlantis, though, is far more advanced. It’s almost like the spark that jumpstarted our evolution maybe sparked somewhere else. Being under water, there’re some things they just don’t have that we have, and some things they have that we wouldn’t think of. It’s maybe not taking place during human development, but maybe in place of it. The humans have developed in a different way. They kept evolving and specializing physically, with different coats and furs for different climates, but they never quite developed higher consciousness. 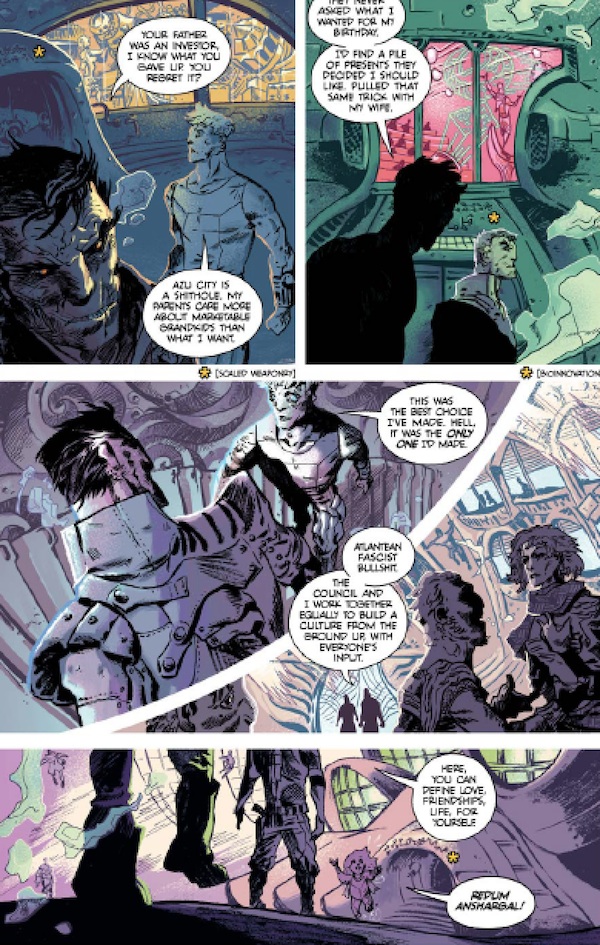 How has the reaction been so far? This is a far cry from a Namor invasion story. You’ve built a whole world under the sea that’s very different from what we’ve seen in comics or sci-fi.

So far the response has been overwhelming! People love underwater adventures, and yes that’s why they love Namor and Aquaman and their kingdoms. But we’ve seen that story. But Namor isn’t actually the closest inspiration, it’s probably “Seaquest DSV,” which I grew up on as a kid. That was an adventure show, sure, but it was also about the dangers and wild wonder of exploration. And that’s what we’re doing here. People are excited for something different — they’ve seen horror, they’ve seen humans living under water. 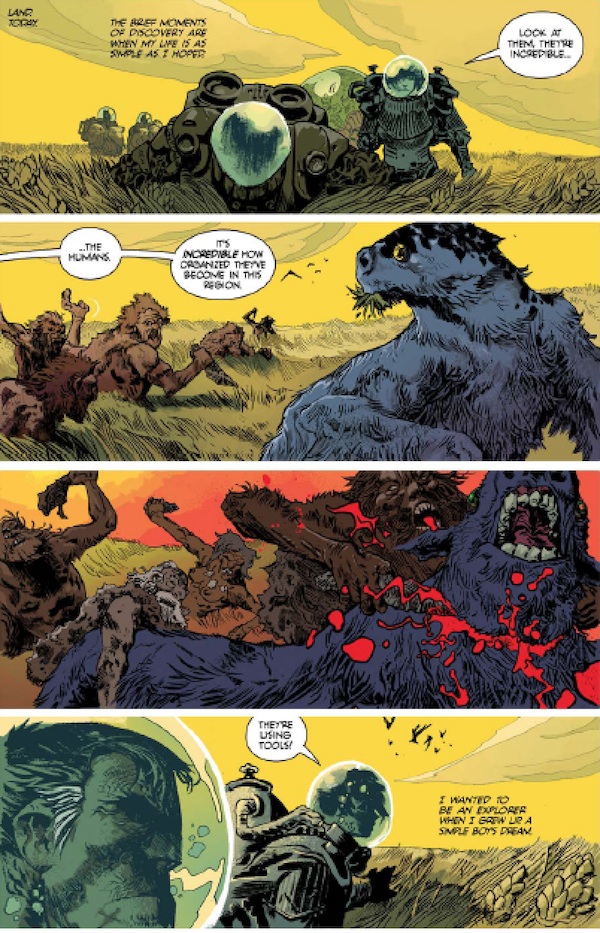 Is the goal of the Atlanteans to take over the surface of Earth, or is the team in ‘exploration mode’?

Atlantis proper couldn’t care less about the surface. The city dwellers only care about themselves. Just like we don’t really often think about visiting the bottom of the ocean, they don’t really think about the surface. But Anshargal’s team and the crew of the Deliverer don’t want to take over the surface either. They want to find a way to live there and be free of Atlantean corruption. They’ve chosen to try to make a life there, no matter how dangerous, no matter the enormous beasts that roam, no matter that there’s little water for them to breath, all for a chance to escape enslavement under a corrupt, one-party system. Each of them has lost something to Atlantis, and each of them is trying to get back at Atlantis by living outside its reach. 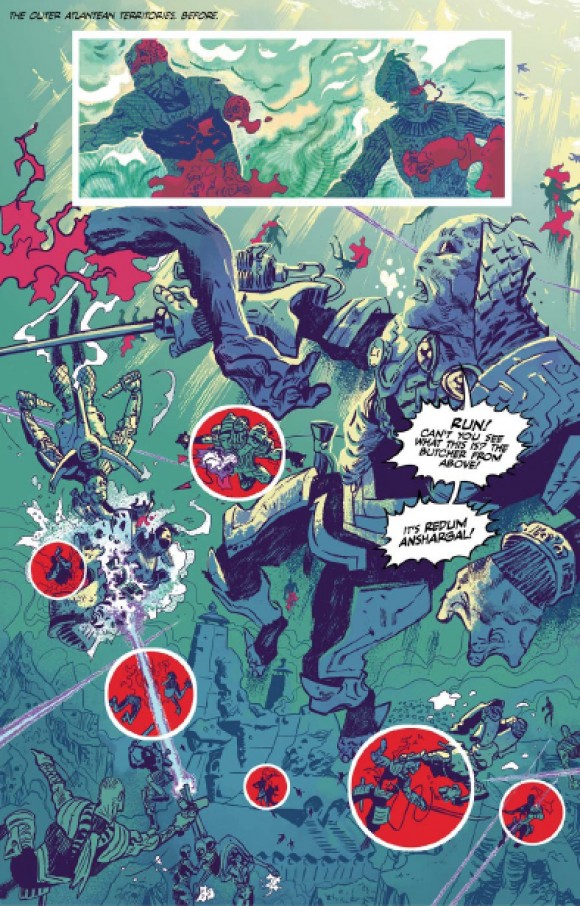 Where are the most threatening creatures going to appear in this book? Underwater or on dry land?

The dry lands certainly have the beasts that are deadly due to teeth and claws, but the true threats, as with any drama, are more subtle. Ferocious condors and savage humans stalk the land. Atlantean kill teams straight out of “Zero Dark Thirty” hunt the shallows, and rebellion is brewing on the decks of the Deliverer. When you make yourselves icons like Ukinnu and Anshargal have, enemies are never hard to find. And on a watertight society barge with over a thousand shipmates, not everyone is going to remain a true believer. Someone’s going to want their money back on Anshargal’s promise of freedom, and that person is maybe the most dangerous of all.

Your favorite seafood meal of the three: fish and chips, high end sushi, or salmon at your friend’s wedding?

High end sushi! As much as I like a fried scallop roll, it has to be tuna sashimi for the win! 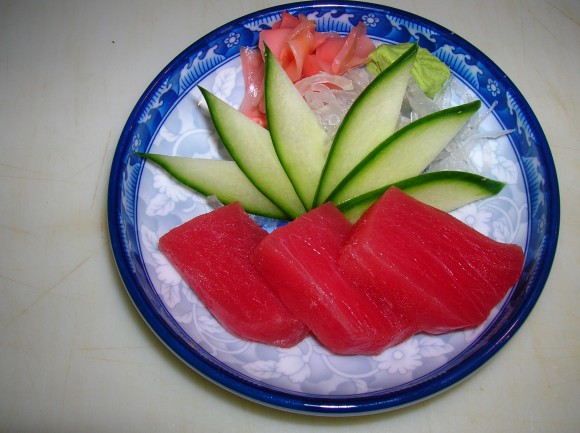