Comics historian Arlen Schumer his first one-man gallery show in NYC, featuring weekly lectures. Here’s the first part of a two-part MIGHTY Q&A about comics, his career and how his show came to be: 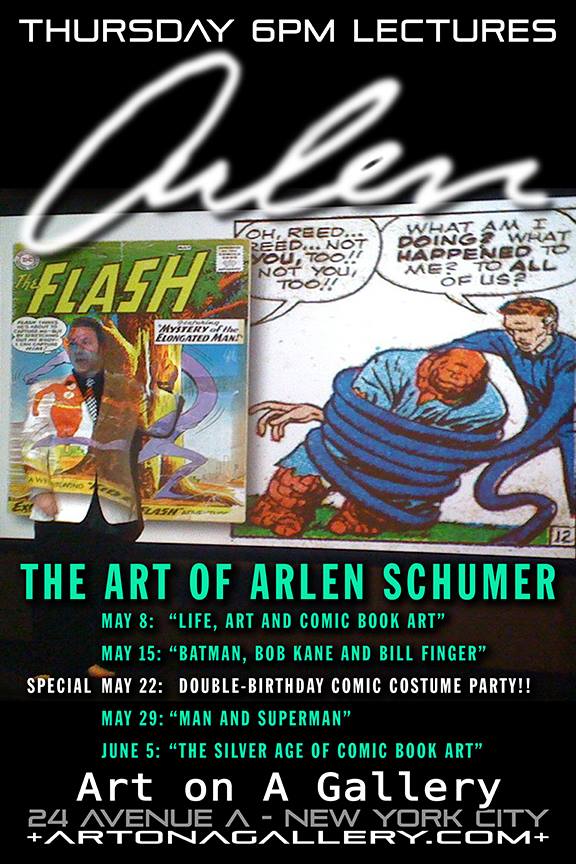 Arlen Schumer: I did it as an autobiographical single-page comic story, “Man & Superman,” printed as the last page of my book, “The Silver Age of Comic Book Art.” But here’s a text version:

I grew up in Fair Lawn, N.J., a great place to grow up in the early-mid ’60s, with equal parts bucolic American suburbia and small-town Rockwellian, pop culture ambiance — everything from an uber-Jewish deli like Petak’s to Plaza Toy & Stationery, which had a classic 20th Century soda fountain: It was there, after school, that I read all the comic books of my youth while drinking chocolate egg creams (with a pretzel log, natch).

And because Fair Lawn, like all of New Jersey, was in the shadow of New York City, I grew up on all that pop culture through television, not just the three networks but the three local stations that showed everything from the old Universal monster movies to “The Little Rascals” to “The Three Stooges” to the George Reeves Superman TV series! 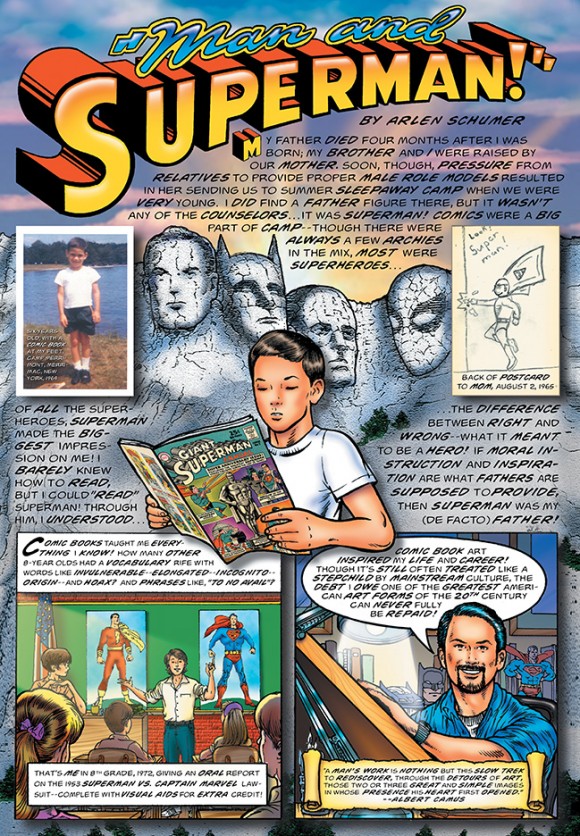 One of those local TV shows, a children’s show called “Diver Dan,” which was filmed in black and white to look like it took place underwater — the actor, in a deep-sea diver’s suit (with a helmet that never revealed his face, so he was like a superhero), walked slowly like he was underwater, surrounded by pop fish hanging by wires—triggered my interest in drawing, as I watched my brother draw him first, and copied him. I’ve been drawing ever since! And collecting, reading and studying comic books, which gave me the foundation on which I built my career, as an illustrator and comic book art historian.

I was the “class artist” all through my school years, always doing “visual aids” for extra credit, and finding ways to incorporate my love of comics into my class assignments — like doing an oral report in 8th grade on the lawsuit between Superman and Captain Marvel!

In high school (Fair Lawn HS, Class of ’76), I was fortunate to have a really great commercial art teacher who exposed me to that world, its techniques and materials, which gave me the confidence to attempt things outside of school — like being the art director of Batmania magazine, the fanzine for Batman fans. 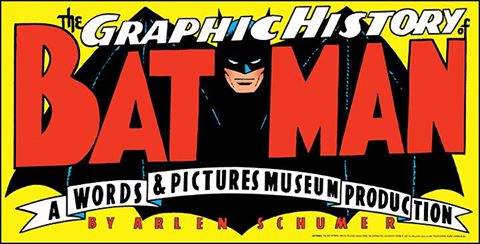 That teaching gave me a leg up when I went to art school after graduation, the Rhode Island School of Design — which I chose because the great comic book artist Walt Simonson had just taken the comic book world by storm in the early ’70s with his Manhunter strip; the letter column in his first issue said that he was a recent graduate of RISD — so that’s where I went!

But once I got there, I majored in graphic design vs. illustration, because I was intrigued by graphic design’s verbal-visual makeup — the same words and pictures combination that was what comic book art was all about.

After RISD, I went to New York City and began my professional career — starting at WNET Channel 13 doing TV graphics, then at NBC doing the graphics for “Late Night with David Letterman,” followed by stints in ad agencies — including working for my comic book artist childhood idol, Neal Adams, at his commercial art studio, Continuity Associates — which was like going to graduate school — and getting paid for it!

At the time, Neal was doing mostly advertising production art (comps, storyboards, animatics), which was preventing him from taking on all the finished-illustration comic book-styled ads that were coming in; I reasoned one guy could make a pretty good living just on the work he was turning away, and that that was what we set out to do full-time upon leaving Continuity in ’86.

Neal had previously done, I thought, the best comic advertising to date; I could never compete with him on a pure drawing level (who could?), but I thought I could differentiate our work by emphasizing overall graphic design and good hand-lettering, due largely to my graphic design education at RISD. 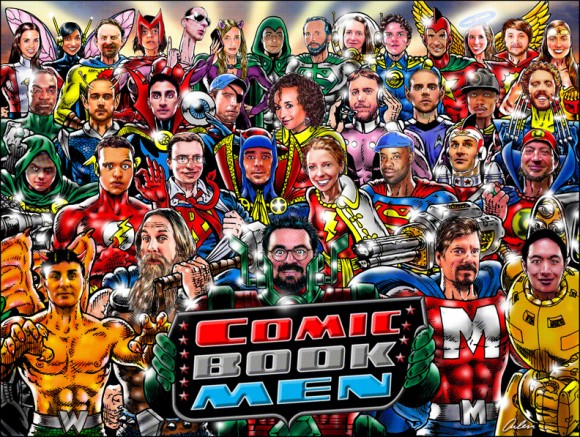 I had no desire to do comic book art for the companies, as I was probably just too slow for the field, and didn’t really have the burning desire to tell stories anyway — I had more of an illustration/poster design mentality. My goal was to bring comic art into the commercial art world with the same impact Roy Lichtenstein had brought it into the fine art world; here is where I felt I could do my part to uplift the medium in the eyes of the mainstream.

Since ’86, I’ve created hundreds of images, with my most visible mainstream work probably being a “screaming woman” illustration for HBO’s “Tales From The Crypt” that appeared throughout the ‘90’s; a series of Trojan Man ads (‘90-’93); magazine covers and illustrations for major consumer magazines and newspapers, like Forbes, Publishers Weekly, The New York Times Magazine, New York Magazine, People, Entertainment Weekly, Rolling Stone, TV Guide, Time and Newsweek.

I’m probably only known to the comic book world through a series of ads for Three Musketeers that appeared in comics from ‘90-’92, and a series of Superman and Batman pop-up greeting cards for PopShots that came out in ‘94 and ’95. (Go to www.arlenschumer.com to see the best examples of these and other illustrations.) 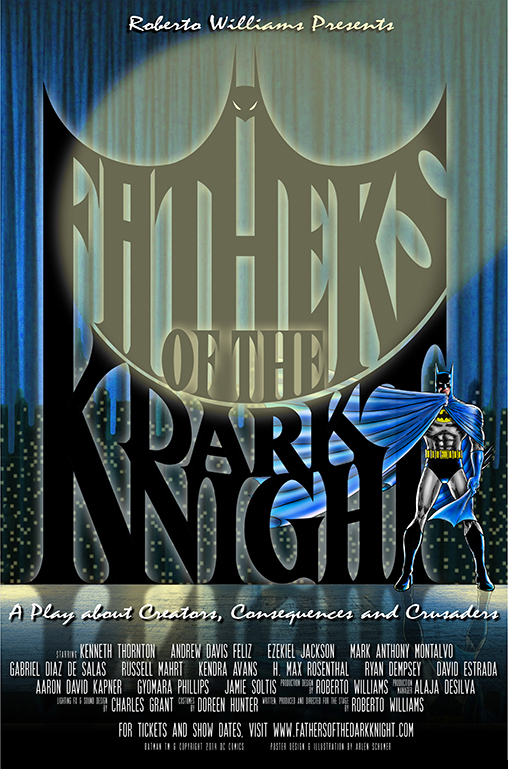 Perhaps better known are the projects I’ve done in the area of comic book art history: convincing Print magazine to devote a special issue to comics in 1988; writing and designing a series of 10 55” x 27” exhibition panels on the Graphic History of Batman in ’97 for the (sadly defunct) Words & Pictures Museum, and six more in ’98 on the Art History of Superman; and “Neal Adams: The Sketch Book,” published by Vanguard in ’99.

Also for Vanguard, I wrote and designed the 16-page color sections in the books “The Amazing World of Carmine Infantino” (published in 2000), and “Curt Swan: A Life in Comics” (2002). I edited and designed an art book based on the legendary TV series, “The Twilight Zone,” treating its black-and-white TV images as art photography, and its dialogue and narration as poetry, called “Visions From The Twilight Zone,” published by Chronicle Books in ’91. And my coffee-table comic-book art history book, “The Silver Age of Comic Book Art” (Collectors Press), about comic book art in the 1960s, won the Independent Book Publishers Award for Best Pop Culture Book of 2003; though out of print since 2005, it’ll be republished this summer in both print and digital editions!

Tell us about the show and how it came about.

I had never displayed my work in a traditional fine art/gallery context because I was a commercial illustrator, and with the advent of computer coloring, lacked anything resembling “original art” that would hang in such venues (even my black and white line art is done in pieces these days, and assembled in Photoshop on the computer).

But back in February, I was asked to participate in one by an artist friend of mine, who was curating a group show in the East Village called “The Struggling Cartoonist,” about comic artists using comic art in non-traditional ways and means—which he knew was exactly my raison d’être.

So I blew up five of my best illustrations that fit the bill into poster-sized prints and hung them. During the opening, a woman came up to me and told me she liked my art more than anyone else’s in the show! Then she told me she was managing a gallery, also in the East Village, called Art on A Gallery, and invited me to take a look. I did the week after, and she offered me my first-ever one-man show right then and there! 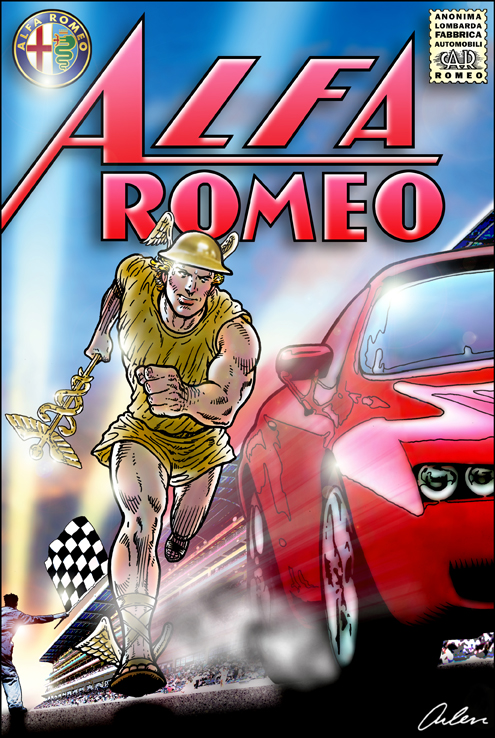 Break down the schedule of the lectures for us and explain how you came up with these four.

I wanted to choose topics that would provide background & context to my exhibited works, and would be general enough to appeal to a more mainstream, general art gallery-going audience, vs. just comic book fans; with that in mind, I chose these:

May 8: “Life, Art and Comic Book Art” — a retrospective overview of my twin careers as comic book-style illustrator and comic book art historian.

May 15: “Batman, Bob Kane and Bill Finger” — on the occasion of the 75th anniversary of Batman’s first published appearance in May 1939, I discuss the behind-the-scenes origin of the character, with specific attention paid to the unsung co-creator role of Kane’s writer and partner, Bill Finger.

May 29: “Man and Superman” — the role Superman has played in my life, art and career, from childhood sketches to adult illustrations and comic art history works.

June 5: “The Silver Age of Comic Book Art” — Based on my comic book art history book, I explore the origins of the superhero traditions and their personification of American ideals and values, and how these attitudes and portrayals changed during the turbulent decade of the 1960s. You’ll not only see where Hollywood’s love affair with superhero movies comes from — you’ll see comics projected like you’ve never seen them before!

Arlen is also starting a series of weekly Wednesday night Google Hangouts with his partners, Midnight Media Capture, which will also be running his upcoming fall series of weekly web events based on his Silver Age book. The first Hangout is this Wednesday, May 7, the night before his first lecture.

NEXT WEEK at 13th DIMENSION: Arlen’s list of most important artists since 1960 — and more!