It’s always good to start the week with a laugh, so here’s a Mighty Q&A with legendary comics parodist Fred Hembeck! Enjoi:

Fred, tell us about what you’re up to these days, projects you’re working on, etc.

Mostly I do custom artwork, taking on all sorts of commissions, as well as selling a wide variety of sketch cards and the like on eBay. My Dateline: @#$! strip has been revived for Jon Cooke’s Comic Book Creator magazine, and a special strip is appearing in an issue of Roy Thomas’ Alter Ego that focuses on The Comic’s Buyer’s Guide, the publication that launched my so-called career.

I’ve contributed a number of pin-ups and one-page gag strips to a number of Kickstarter projects, and I’ll soon be providing a dozen pages of art for a graphic novel written by an old friend in the hopes of using it to help sell it, after which I’ll finish it up. So, I’m busy, if not exactly easily spotted on the racks of your friendly neighborhood comics store!

What’s your background? How did you end up in the biz?

My kindergarten teacher told my mom I had talent that should be encouraged, and not long afterwards, my dad brought home a box of second-hand comic books given to him by a co-worker whose son had
outgrown them. Put one and one together, and pretty much from the get-go, all I ever wanted to do was be a cartoonist!

I went to college for art, graduating just around the time the Kubert School opened their doors for the first time — THAT would’ve been much more along the lines of the sort of training I needed, but hey, timing can’t always be
perfect! I trotted my portfolio of mediocre super-hero artwork around NYC during the summer of ’77, garnering one rejection after another (including a memorable one from Vinnie Colletta, DC’s art director at
the time).

I staggered home, licking my wounds, vowing to give it another go, but while I geared up to prepare that second portfolio, I cobbled together the first Dateline: @#$! strip (featuring Spider-Man being interviewed by Cartoon Fred, a caricature I’d come up with mere weeks earlier to stay in contact via illustrated letters with college roommates I’d only recently been separated from). I sent it in to The Buyer’s Guide For Comics Fandom — then the weekly center of the comics universe — and publisher Alan Light printed it, asking for more. It caught on practically overnight, and soon I had folks from the companies who’d only months earlier shown me the door asking me to work for them, most notably when DC had me add a gag strip to their omnipresent Daily Planet promo page.

Of course, this was an entirely different sort of art than what I’d been trying to sell them on earlier, so you really can’t blame them. It was quite the thrill, as I’d been obsessively reading comics for nearly two decades at that point, and even though this wasn’t the way I’d planned it, I was — and am — delighted with the way things
turned out! 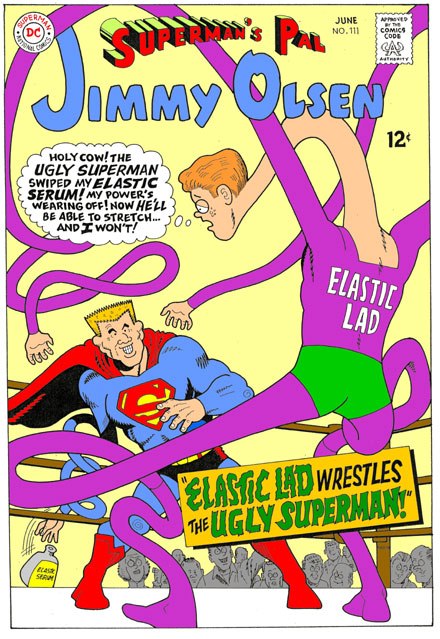 You could be called the Godfather of Comics Parody. The Internet is full of it these days but there was a time when you were pretty much the only guy doing your type of satire. What are your thoughts on what you have wrought?

Someone once called me the original comics blogger, which I thought seemed appropriate. I’d use my strips to blather on and on in increasingly teensy tiny hand-lettering about the old comics I’d read, and if I wanted to, for instance, clue readers onto the sublime silliness of an old Jimmy Olsen cover, I couldn’t just scan it in and post it. Oh no — I had to redraw the whole thing (in my own quirky style, natch)! Kids today — they just don’t know how easy they got it!

Well, the first comic I ever saw was a copy of Spooky the Tuff Little Ghost, and for the first few years, it was all Dell and Harvey kiddie books.

But seeing the improbable wackiness of Bizarro in some second -grade school chum’s comics made me plunk down my first dime for a Superman comic of my very own, and I was soon buying ALL the DC super-hero titles (AND paying twelve cents apiece, a price jolt I had to deal with just a few months into my new-found spending habit).

To this day, the Mort Weisinger-edited Superman family line of the era — with their ever-expanding, self-contained universe and often perverse emotional views of jealousy, loyalty, and love — remain favorites. But right from the moment when I picked up a copy of Fantastic Four #4 in 1962, DC took a perpetual backseat to Marvel Comics with me. Watching the original Marvel Age of Comics blossom right before my eyes — and at just the right age — now THAT was good timing!

(That said, I think my favorite comics of all time would be the Little Lulu series by John Stanley and Irving Tripp, with Dennis the Menace by Fred Toole and Al Wiseman, and Little Archie by Bob Bolling both vying for runners-up with Stan Lee and Steve Ditko’s initial run on Spider-Man, as well as Lee and Jack Kirby’s first 40 issues of the Fantastic Four). 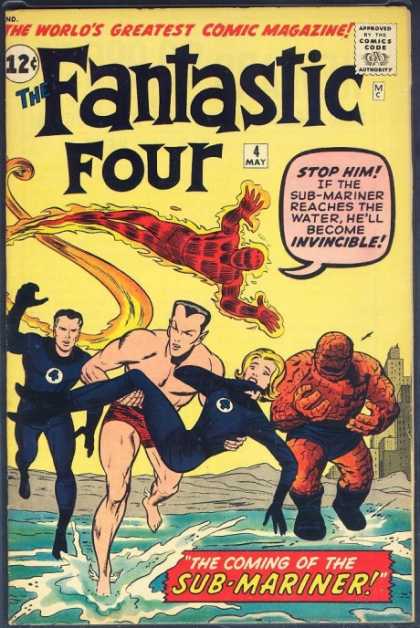 Do you still have that first comic?

I no longer have that Spooky comic — around age twelve, I winnowed my kiddie books down to a meager few (including ones featuring Lulu, Dennis, and Little Archie, but not much else), giving most of them away. Bad move. Never did it again.

But I HAVE held onto that FF #4, as well as the first Superman comic I bought on my own (which featured a retelling of his origin — again with the good timing, huh?) 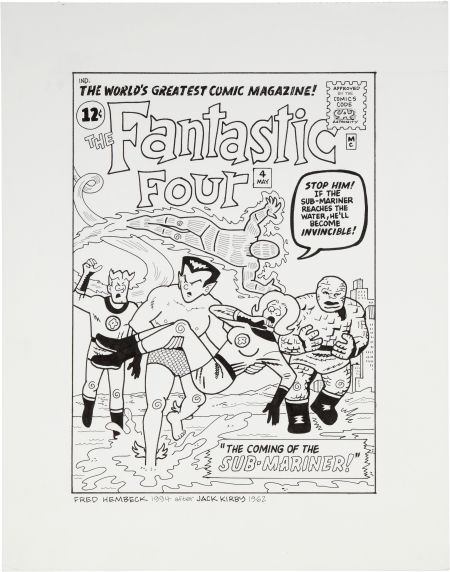 Gee, that’s had to narrow down. I’d simply have to say my handful of early DC and Marvel purchases, as well as some of those wonderful Dennis the Menace travel specials — Mexico, Hollywood, and Hawaii, especially.

What’s your greatest achievement in the business?

You mean besides getting into it? Well, how about being able to express myself in a unique fashion with a style unlike anyone else? Because if I’d gotten into the biz the way I’d hoped to in the first place, maybe I would’ve drawn a handful of mediocre adventure stories from other writer’s scripts, and I likely would’ve soon faded away and have long been forgotten by now.

But instead, I managed to get my actual name into the title of some fairly high-profile books — never my initial idea, but nothing I ever fought very hard against either, to be honest — and THAT folks remember!

You mean besides Vinnie Colletta inking my pencils for Fred Hembeck Destroys The Marvel Universe? Besides never learning how to draw hands properly? Besides lending my copy of Amazing Spider-Man #1 to a kid back in ’63 and never getting it back? Besides working with Stan Lee three times (collaborating on an animated prime time show in 1990, doing a weekly strip for Stan Lee Media in 2000, and creating a 17-page comic based on Stan’s Twitter persona a few years back) and having NONE of them ever see the light of day?

Seriously, we all have regrets, but I try not to dwell on them (though I sure wish I still had that Spidey #1 …). 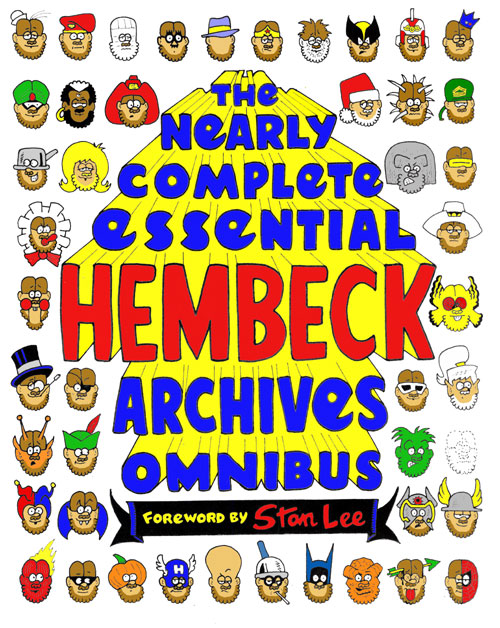 Available at your finer comics shops and booksellers.

What do you think of comics today?

I don’t follow them anymore. After about 1990, when our daughter Julie was born, I began — without even realizing it — the long, slow retreat from reading every darn comic Marvel and DC published (and plenty others besides), a pace I’d maintained from 1961 right on up through the end of the ’80s. I kept buying select titles up until about a decade past, but finally gave up the ghost.

Lack of time to read them was a large factor, but I also didn’t really cotton to what was going on in the books, with all the tedious darkness and relentless violence. I
figured my comics-reading time was better spent with The Amazing Spider-Man Ominbus, Little Lulu reprints, EC Comics collections, and newly republished volumes of my all-time favorite newspaper strip, Leonard Starr’s Mary Perkins On Stage.

But thanks to the Internet, my monthly copy of Diamond Previews (from which I usually order a small selection of archival and historical material), I do see what’s going on in the field. I even buy  the occasional blank cover edition of a mainstream comic (to draw on and sell, natch), and usually take the opportunity to page through them. Generally, my reaction is “brrr”, and I go running back to my vast selection of Kirby reprints.

But really, I’m sure there’s a lot of good stuff out there, especially on the independent side of things — I still find the comics form itself as wonderful as ever — but these folks wearing the colorful costumes of the characters I grew up with just aren’t the same people, and I made my peace with that fact a while back.

Every generation is entitled to their own art. Me, I had Lee/Kirby and the Beatles, so I’m not gonna complain!

Tell us something that we haven’t covered in this interview.

For the last four years, ever since Turner Classic Movies was restored to our cable system, I’ve become obsessed with watching old films. One in the morning and one at night most days. That leaves very little time for reading comics, but I do so much drawing in the hours in between — my sketch card total must be in the thousands by now — I still feel incredibly connected to these brightly colored characters of my youth.

And I imagine I always will.