If you’re looking for work with more of an indie bent, Scott Eder is probably your man. The New York-based dealer specializes in art from all the way in the beginning of the underground comix scene including Crumb, Shelton, Spain, Deitch, Moscoso, Lynch, to the present generation with names including Seth, Chris Ware, Daniel Clowes, Gilbert and Jaime Hernandez, Drew Friedman, Peter Bagge and Tony Millionaire. He also carries wares from more mainstream names, such as Jack Kirby, Jack Davis, Steve Ditko, Simon Bisley and Dave McKean. Eder got into the comics scene in the early 1970s, attending the New York Comic Art Convention organized by the late Phil Seuling. He later became a comics dealer and ultimately a seller of original art. You can find him here as well as at his gallery space in Brooklyn. 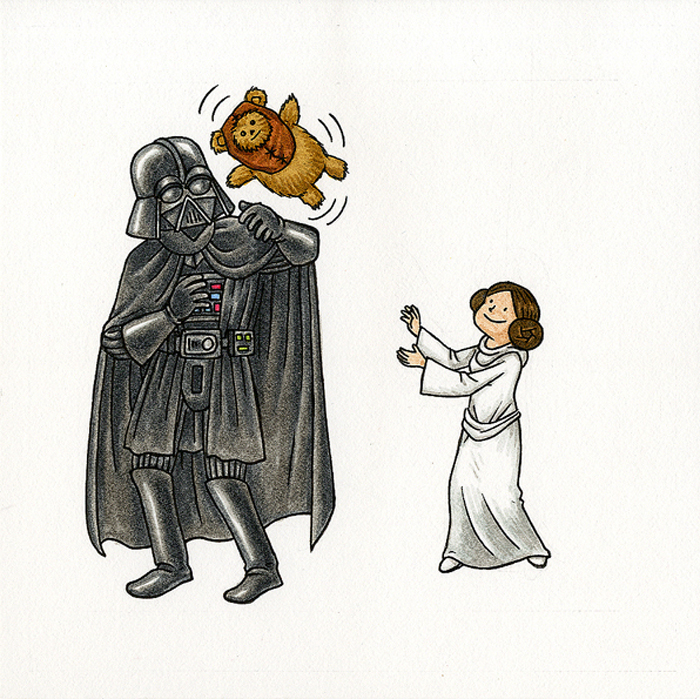 From Jeffrey Brown’s “Vader’s Little Princess.” Brown’s exhibition at Eder’s Brooklyn gallery runs through Nov. 15. And if you have enough midichlorians, you can buy this there.

Financial magazines have written articles about the investment potential of original art. What do you think about that?

I think it’s true, but that doesn’t mean anybody listens. I’m sure here and there, there are savvy investors out there, but they’re more likely to invest in the mainstream classics than in the esoteric, underground art I specialize in. Though they’d be smart to invest here, as it’s much more liked by the fine-art gallery and museum world.

In the last decade or so, which artists’ work have increased the most in price, to your eyes? 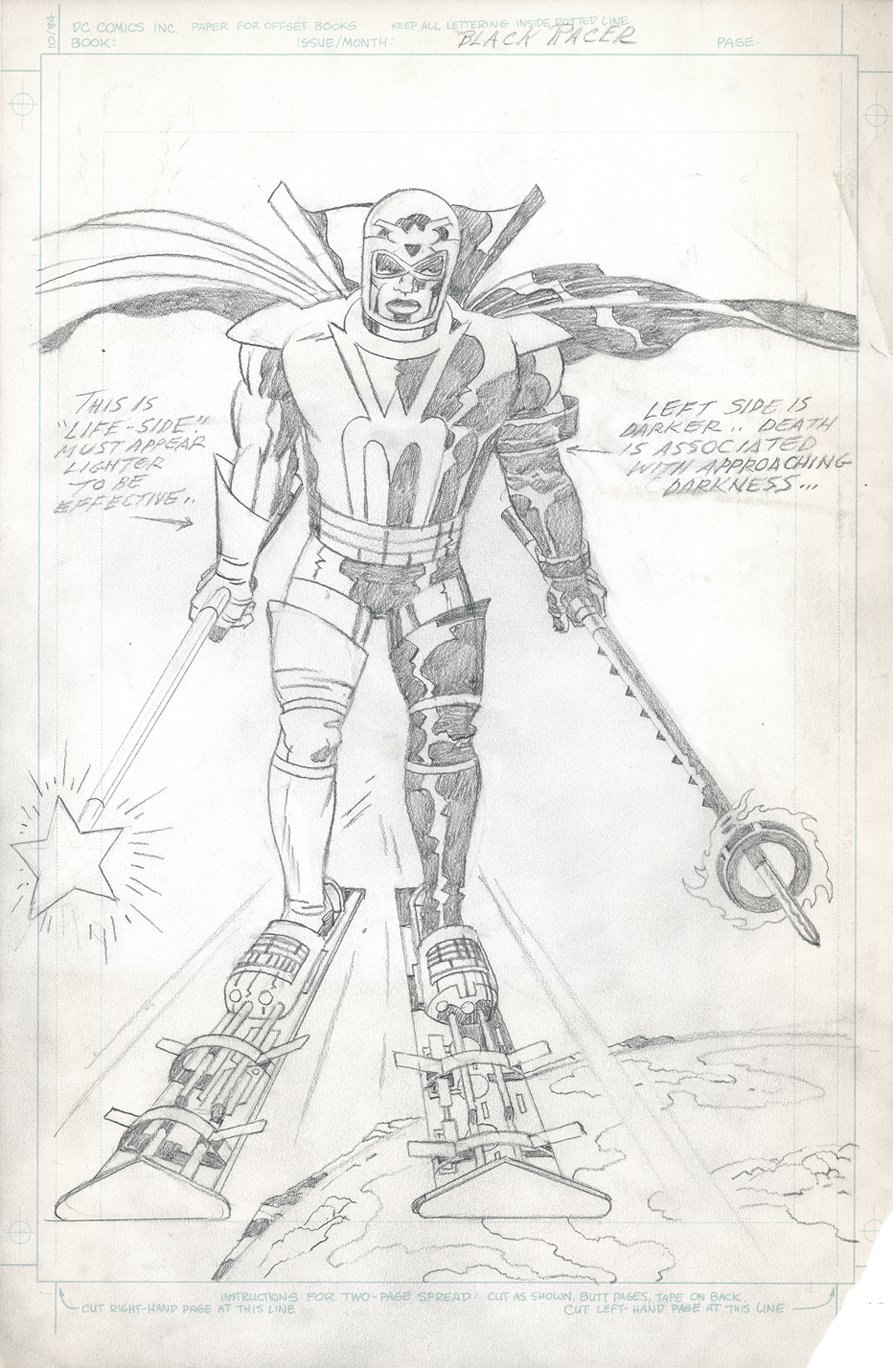 Some fantastic New Gods Black Racer concept art for the ’80s Super Powers series from DC. This was sold by Eder.

Do you have any pieces that you’re just too attached to and won’t ever sell?

Yes, but that’s what all dealers say. I’m not rich enough to turn down crazy offers. This being said, 50 percent of the art I own by value isn’t in play. Dave McKean’s cover art to Sandman #1, also the Jaime Hernandez back cover of the self published Love And Rockets #1. My five-page story by Robert Crumb featuring Mr. Natural from Uneeda Comix. A Chris Ware painting from Acme Novelty #1 and a New Yorker cover Chris Ware did. George Herriman Krazy Kat & Ignatz Sunday page from 1917. Jon J. Muth covers to Havok and Wolverine. Kent Williams Hellblazer covers, and his Havok and Wolverine cover. George Pratt pages from Enemy Ace. It goes on and on and on.

Do you have a Holy Grail piece that would be the ultimate acquisition?

There’s always some kind of special piece that would one-up what you already have. For some artists, I already own “that” piece. So, I’m always on the look out for something that would be even better. Right now I can think of at least one artist from a specific title that would be Grail-like, but I don’t want to jinx myself, or alert my competitors as to what that is.

You travel the world to attend conventions. How would you characterize the differences between the foreign fanbase and the American one?

As you might imagine, there’s a completely different vibe at foreign conventions. To generalize, I think Europeans are more connected to art than Americans. The festivals there always have art exhibitions that are really well done. And no American shows do that. It’s all biz and commerce here. There’s lots of biz at European shows, but they’re a lot more down to earth about art. And they’re way more knowledgeable about the world of comic art. Not just their art. Americans? Not soooo much.

Is there an artist whose work — whether you sell it or not — you think is currently underpriced?

Lots of artists’ work is underpriced. Second- and third-tier underground art. Just about all Golden Age art. Jack Davis is horribly undervalued, probably more than anyone else. He’s a legend. Will Eisner art is a very good value. 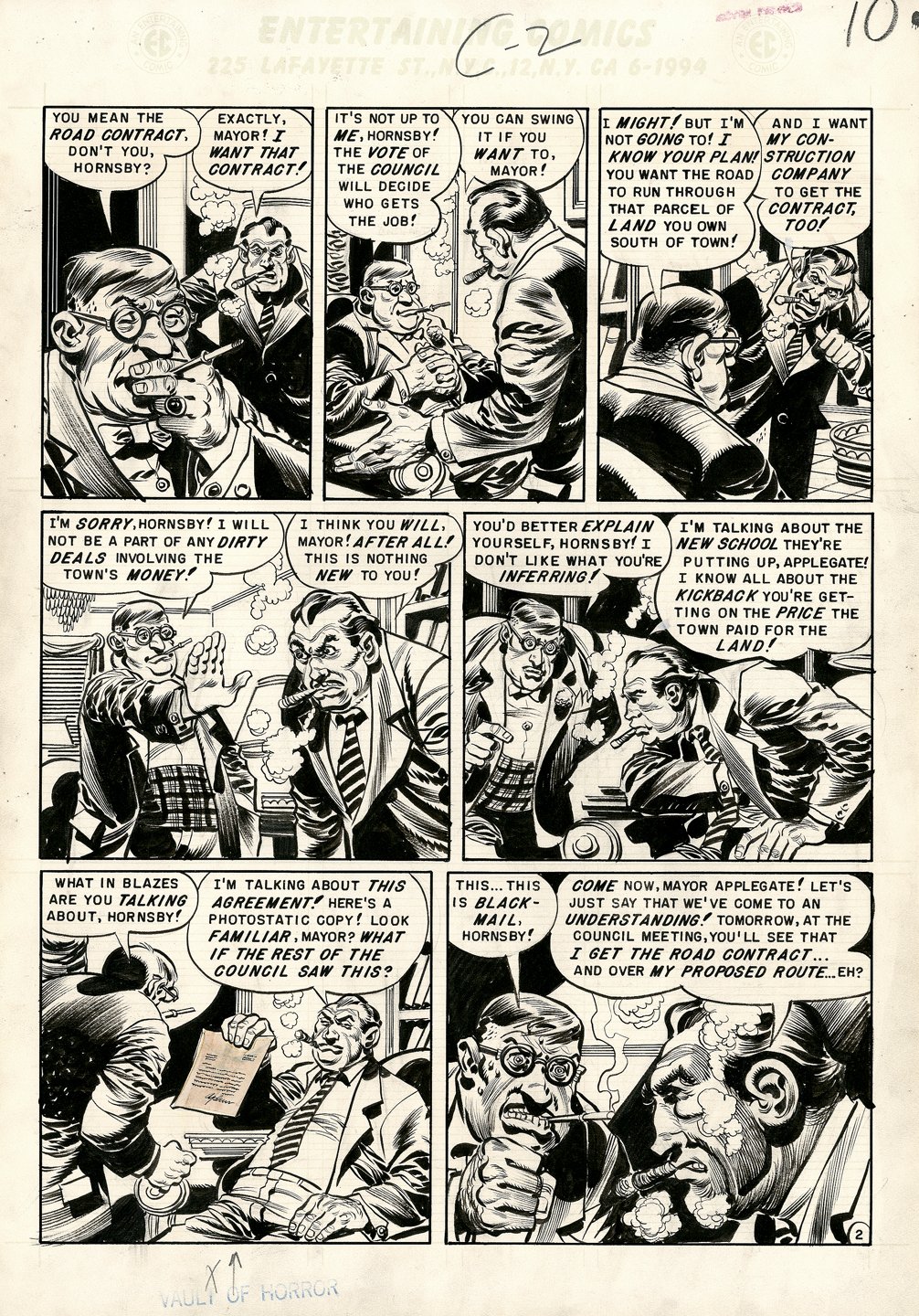 Some Davis EC art on sale.

What about an artist who is overpriced?

Lots of them, but that only makes the underpriced art even more of a value. Artists get hot for lots of reasons. I don’t particularly care for certain types of comic art, like “good girl” or cheesecake art. Adam Hughes is a guy who draws women — in the comic book superhero way — very well, according to lots of fans, and that art is expensive. If you want something sexy, go to a skin mag.

What’s your best tip for those who are looking to buy original art to make sure they don’t get ripped off?

Study the market a bit. Connect with good collectors and good dealers. Follow auction results, though be wary of auction results. They don’t always accurately represent the real pricing. Sometimes there’s auction hanky panky, Other times, there are simply people without self-control, who love the environment of auctions. Ebay is a decent place to start. I have lots of art up on Ebay.

Are there any celebrities with loads of cash who collect original art, that you know of?

Famous people collect comic art. Many of them from me. But it would be rude to name names. Let’s just say one of them is one of the world’s richest men. Several famous film directors, big shot TV people, plenty of famous actors come to the booth at Comic Con, and a well-known CEO of a huge company. Guillermo Del Toro is a big comic book fan and a collector of comic art.

Lots of artists work digitally now. How does that affect the business, and aren’t they cutting off a secondary form of income for themselves?

Every artist working digitally is shooting themselves in the foot. It’s practical, it’s efficient, and it lacks a soul. And, as you say, they won’t get income from it. The majority of good artists still work the old way.