CLAY N. FERNO has the interrogation! 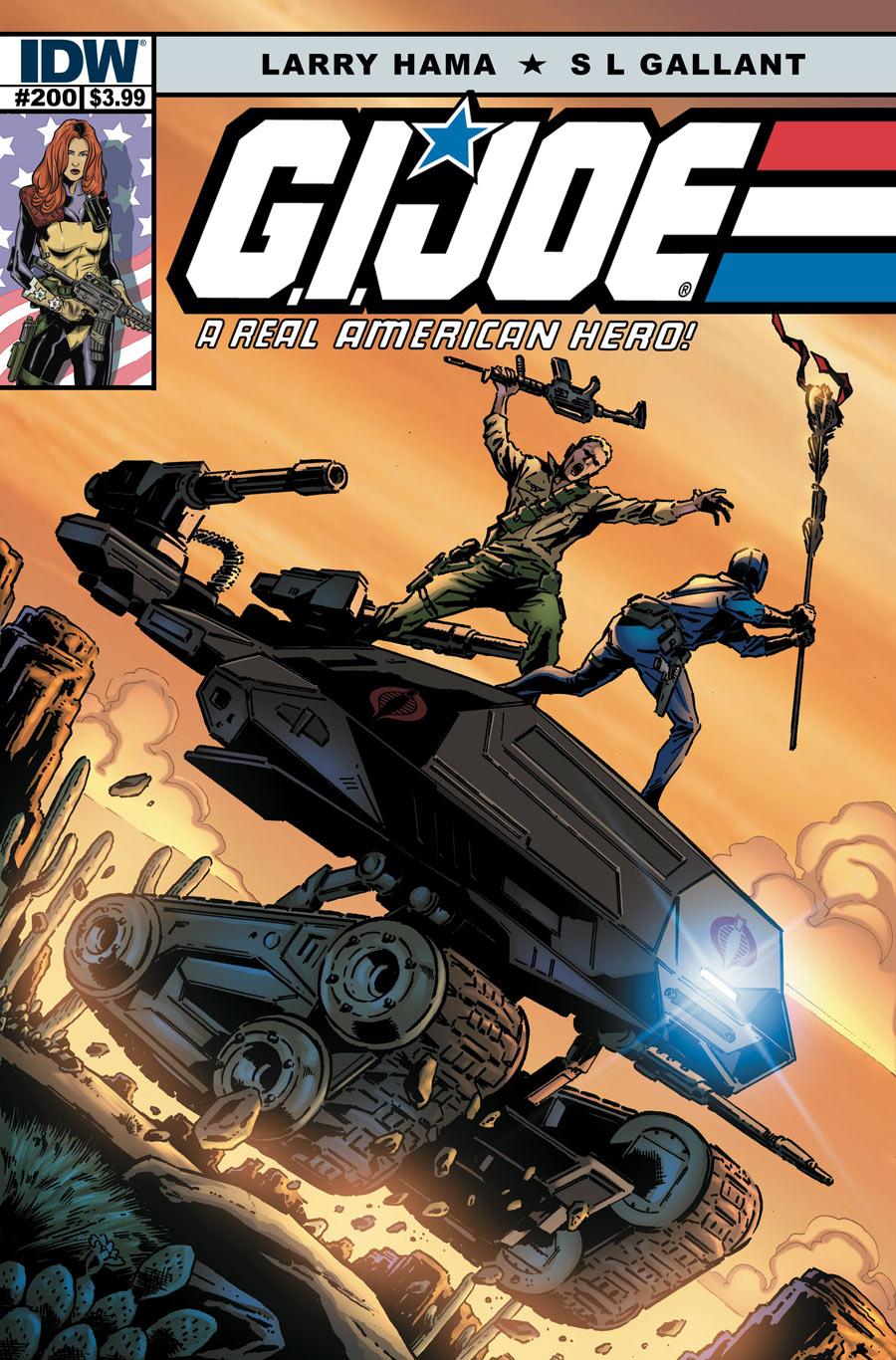 Clay: What was your first Joe comic?

Tim: Issue #90, which I got a few weeks before heading to summer camp. The cover shows two Joes about to get brainwashed, so I couldn’t not buy it, even though I wasn’t into comics. And the “Next Month” blurb shows a ninja fight, but that issue was off the stands by the time I got back home from camp, and it was two years before I tracked it down.  Those brainwashed Joes are fine, by the way. More or less.

What does Yo Joe Cola taste like? I think R.C. Cola, not The Big Two.

Yeah, RC or a supermarket generic. I always liked that the Joes had their own cola to counterbalance the Dreadnoks loving grape soda so much, even though it makes about as much sense as Delta Force having its own line of jeans.

You are (somehow) a bigger Joe fan than I am. Do you have any Action Force books?

As for being a big fan, there’s plenty to go around. Some guys have every toy and an encyclopedic knowledge of them. My toy knowledge runs out after 1997, but I’m pretty good when it comes to the comic or the original show. I tuned out on Sigma 6. Lots of ninjas running super-fast doesn’t make it G.I. Joe.

Regarding “Action Force,” I think I have all of them. The series ran 50 issues, and then “European Missions” was another 15 or so? I mean, most of that reprints the American series, so it’s not too much of a grail. But I like the idea of a weird analog of “our” team having adventures in Paris and the London Underground, with words like “color” inelegantly retouched with the British spelling. 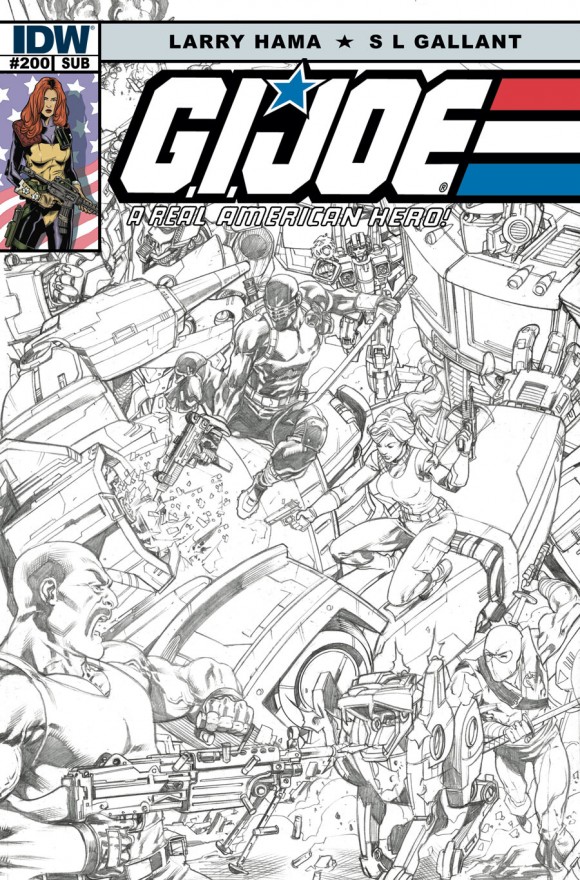 What does your original Joe art collection look like?

A couple covers and pages from the Marvel run. I love that older comics art has the lettering right on it, either ink right on the paper, or cut-and-rubber-cemented word balloons. Modern art is missing something since the lettering is just a Photoshop layer. I’ve also got a few animation cels from ’85 and ’86 framed on my walls. A favorite cel shows Flint, Lady-Jaye, Gung Ho, and Alpine opening mail inside Joe HQ. We’re looking down at an isometric view. The metallic floor is wet-on-wet paint technique, and the computer buttons are all these perfectly ruled straight lines, with highlights and shadows. And it’s gouache, so it really pops. It’s what I want to see at the Museum of Fine Arts — animation backgrounds. Even artifacts that aren’t one-of-a-kind are great. When researching my book, a writer on the series sold me his photocopied storyboard packet from “The Funhouse,” which might be my single favorite episode of the animated series.

How excited were you when IDW announced a continuation of the Marvel series?

Cautious optimism. Maybe you can’t go home again. Same writer, but different artist, different market, and I’m a different person. Think of your favorite TV show — like if “The X-Files” or “Star Trek: Deep Space Nine” started up again right now, could it be the same? So IDW Publishing rolled out issue #156 15 years after #155, and the revitalized “G.I. Joe: A Real American Hero” took some time to find its footing. I don’t love those first few issues, but I very much enjoy it now. Since the book doesn’t have to advertise new toy product, it can keep focus on a smaller set of characters and vehicles. In the ’80s and ’90s, every three issues the story had to stop and incorporate whatever toys were shipping at that time, a juggling act for the writer. Did I mention my store, Hub Comics, is giving away 200 copies of issue #200? 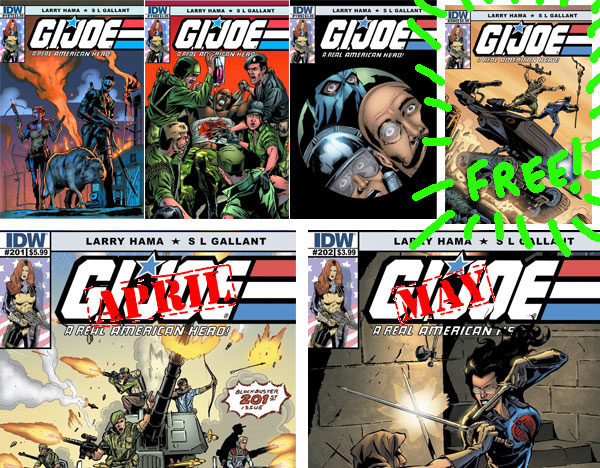 What’s this I hear about 200 copies of A Real American Hero from Hub? Have you had too much Yo Joe Cola?

Hub Comics is excited about “G.I. Joe: A Real American Hero” hitting issue #200, so we’re giving away 200 copies for free starting on the day of the book’s release. That’s a $6, double-sized comic, by the way. Too many monthly series start over at issue #1 these days, so the number itself is a milestone. And it’s a tightly written, well-drawn, fun book.

Care to tell fans about your upcoming book? How is it coming along? We enjoy your blogposts on your process!

Thanks. I’m writing the definitive art of- and history of G.I. Joe. It’s a coffee table book based on 175 new interviews, with lots of photos and rarely or never seen art. It’s about two-thirds done, and I write in my spare time, so I can only say I’d like it to progress faster. And the blog, A Real American Book!, has art that won’t fit in the book. To whet your appetite.

It was great to see Larry at your store, and we wish him a speedy recovery after a recent fall! How long have you known the legendary Mr. Hama?

Yeah, Larry broke a hip a few weeks back, and by the time your readers see this he’ll be out of rehab. Facebook tells me he plotted G.I. Joe issue #203 longhand since he wasn’t allowed a laptop there. I met Larry in 2001. He was the first person I interviewed for my book. We talked for three hours. Larry is down to earth and generous. I like hearing his stories, and he has many. Seeing him draw is great, too. He’s fast and fearless with a pencil, there are some photos at Hub’s Facebook album of the event. He just draws straight ahead. He storyboarded for “Boardwalk Empire,” still does freelance. 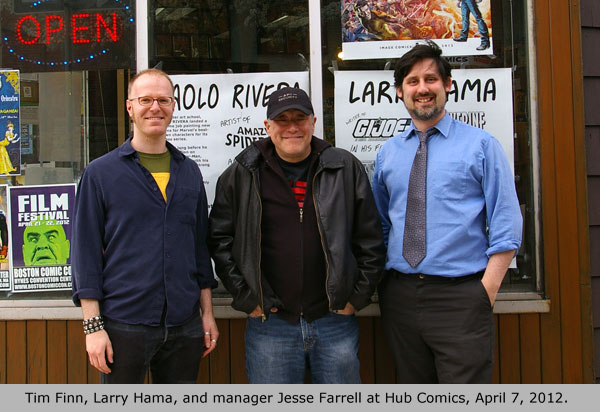 With Cobra in The Pit and Bazooka in trouble in Sierra Gordo — what are your predictions for Issue #200?

Double-sized anniversary issues tend to wrap up converging story threads with a big fight. I think this will be like issue #50, the Battle for Springfield. But Cobra Commander and Dr. Mindbender are outnumbered as of #199, so some Cobra forces will have to show up.

The black armored Cobra Stinger Jeep wrapped in Budo’s costume, with his swords where the missiles would be. Everyone knows about the ninjas, but G.I. Joe’s resident samurai-in-full-armor doesn’t get any love. 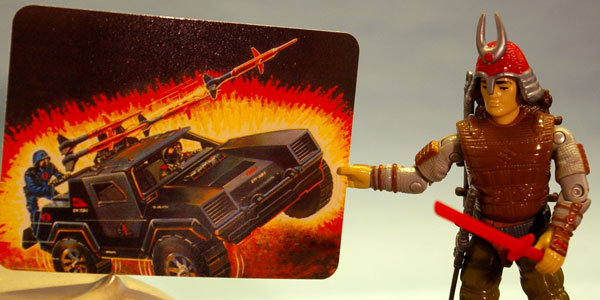