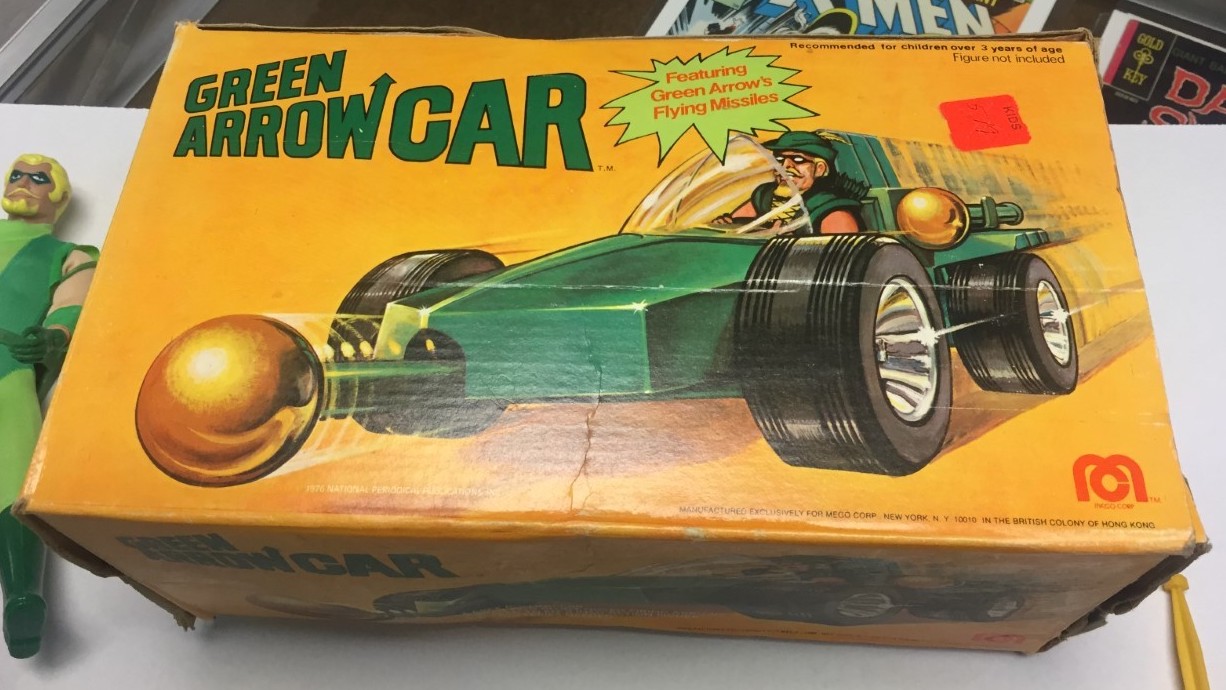 I’ve lived a good, happy life as a Mego collector. I’ve pretty much gotten everything I’ve ever wanted — even if a healthy number of my items today are reproductions — as well as figures I only could dream about growing up in the ’70s.

When it came to the World’s Greatest Super-Heroes line, being a Batman fan was the best part, because you got the most characters, vehicles and playsets than any other hero. But that’s not to say that other characters were bereft. 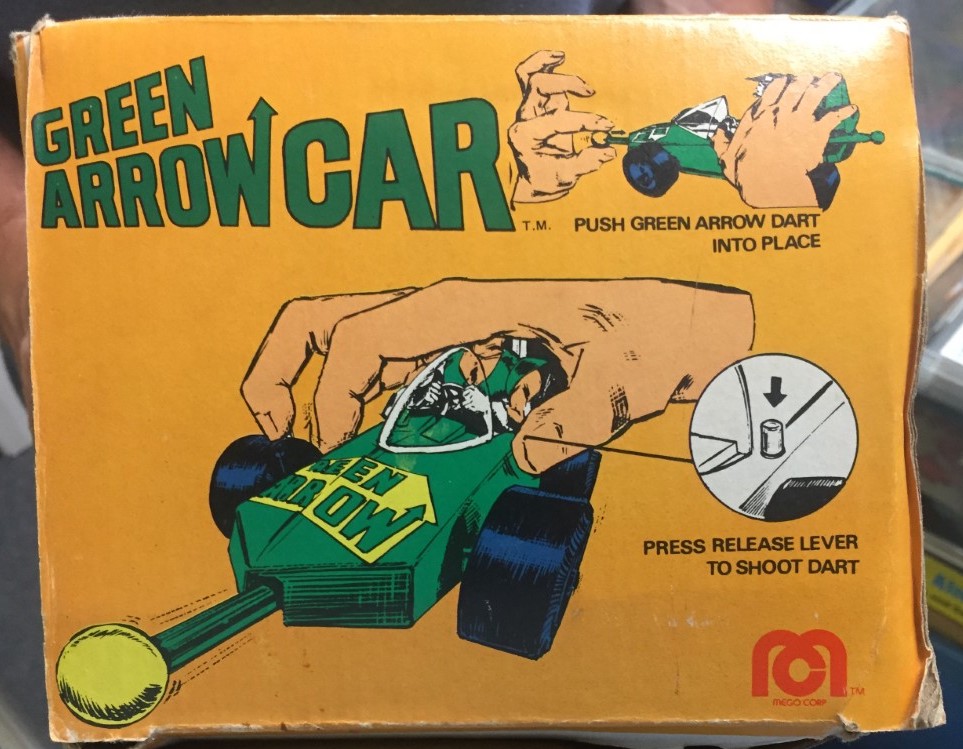 Green Arrow, for example, got his own Green Arrow Car and it was one of the coolest looking vehicles in the toy aisles. Thing is, they’re not so easy to come by these days — at least not at a price or in a condition I’d be comfortable with.

So I got a big, vicarious rush last week when comics writer Ron Marz tweeted out this image: 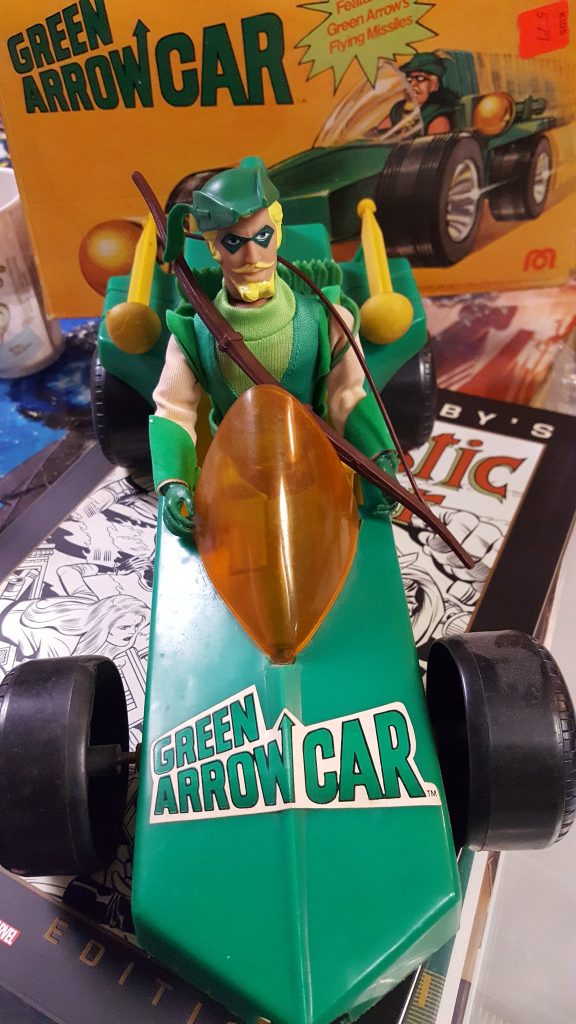 That is groovy and far out all in one. Turns out the owner is Ron’s pal John Belskis, who operates both Excellent Adventures Comics in Ballston Spa, New York, and the twice yearly Albany Comic Con.

“My brother and I have collected and sold Megos for over thirty years now,” John told me. “We never had the Green Arrow Car. We had everything else from the Wayne Foundation to even store displays, but through all those years never had a chance to buy one. We don’t really have many DC-related Megos these days but this car was always on the want list, so I like having it and showing it off. A lot of people have never seen one before.” 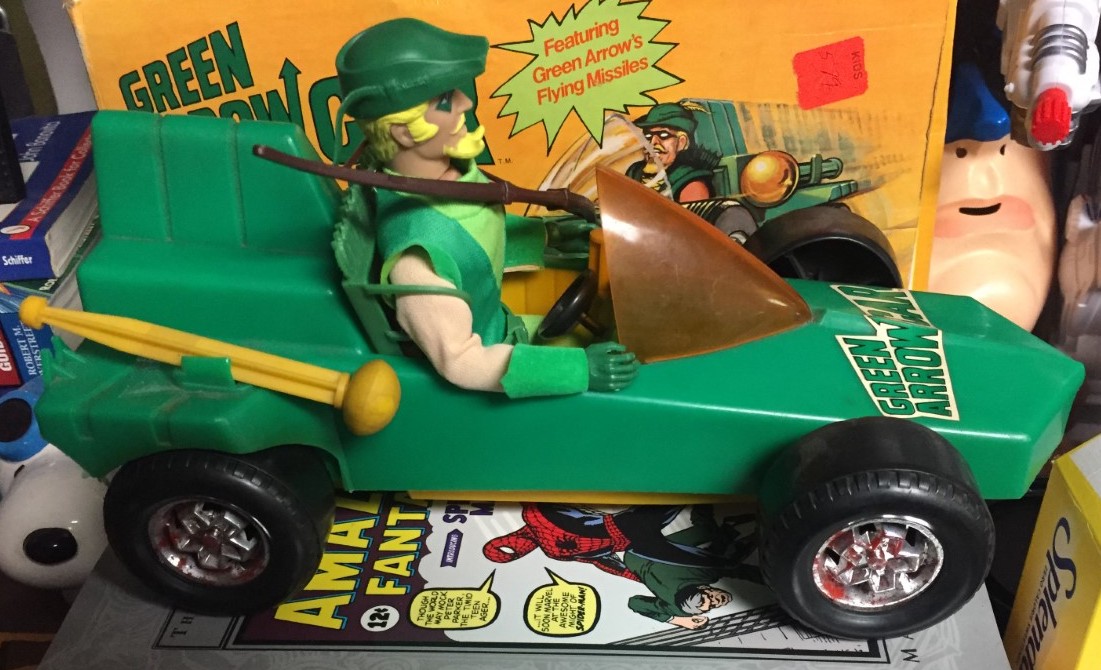 Great for him — but sad for the rest of us — he has no plans to sell.

“I’m not really interested in selling it, it’s a cool piece that I’ve always wanted,” John said. “One of my artist friends that attends our convention in Albany had some Megos from his childhood. He knew I sold them and liked them. He offered it to me, so I bought it (about two years ago). Another reason I need to keep it in the family.” 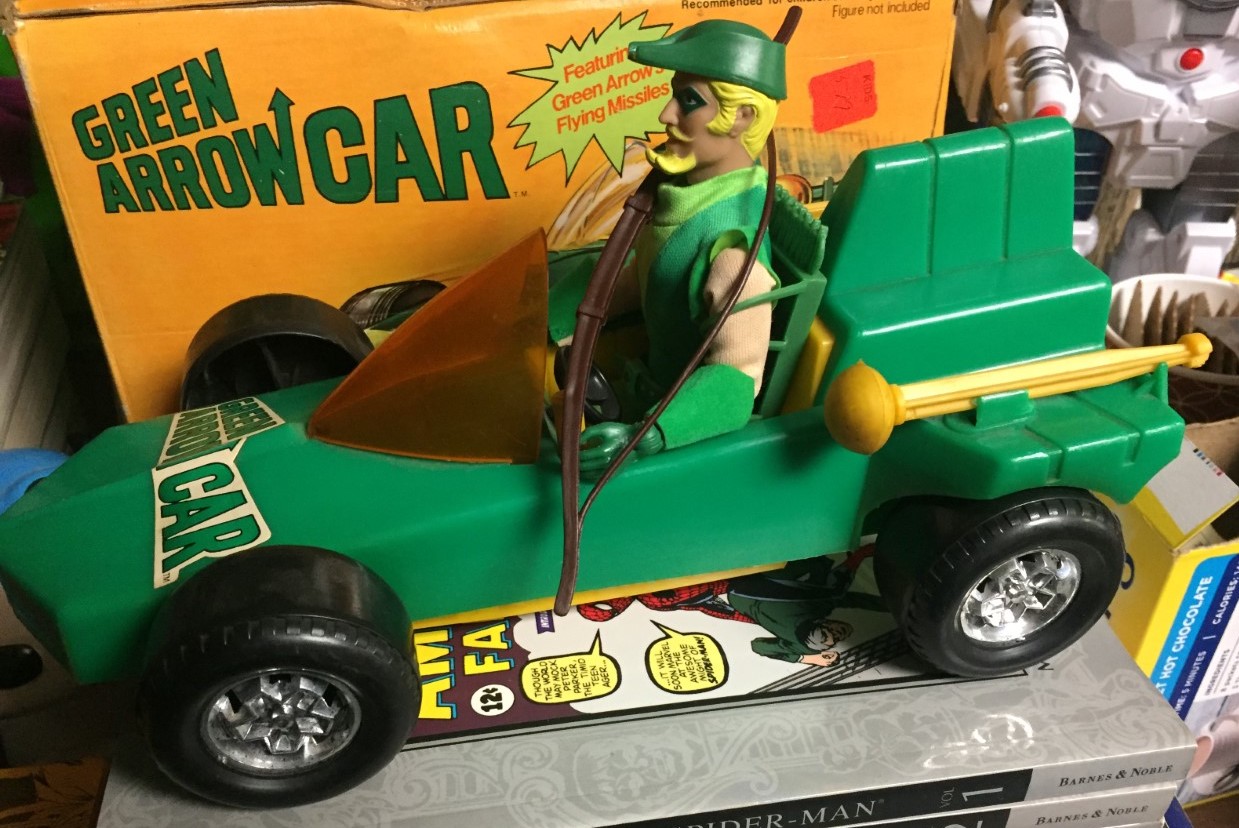 Marz is also a Mego devotee — but never got his hands on GA’s whip.

“Megos were THE toy of my childhood, Ron said. “I had a bunch of them, everything from the original DC batch of Batman, Robin, Superman and Aquaman, to most of the Marvel ones, everyone from Cap, Spidey and the Hulk to Thor, Conan, Falcon and the Fantastic Four. In fact, I still have my original Spider-Man. My Mego love also extended to the Planet of the Apes and Star Trek lines. 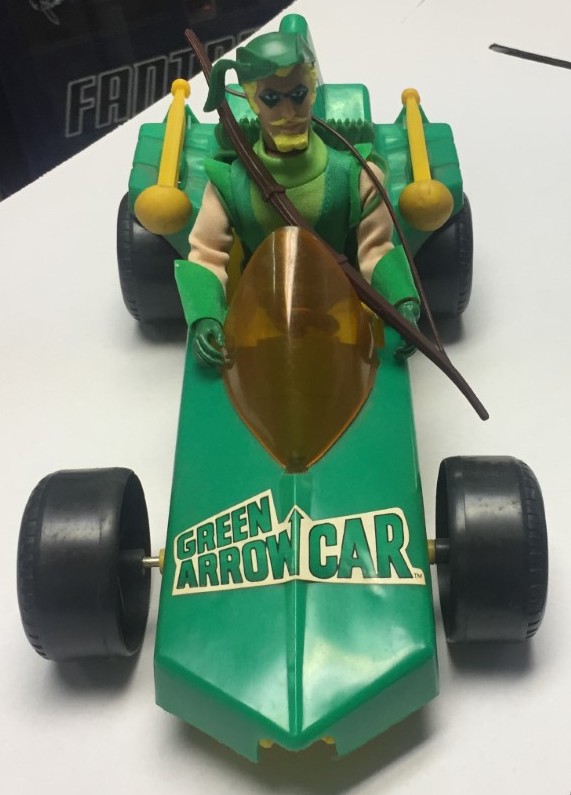 “I did indeed have the Green Arrow figure as a kid,” added the former Green Lantern writer. “I actually wondered why there was no Green Lantern action figure at the time, it seemed like such a natural addition to the line. But I definitely did not have the Arrow Car. I’m not even sure I knew it existed. I was all about the Batmobile, and the Planet of the Apes Treehouse, both of which I played with endlessly.”

To those of us who grew up with Megos, seeing a Green Arrow Car in such nice shape is a special occasion, even if only through photos. 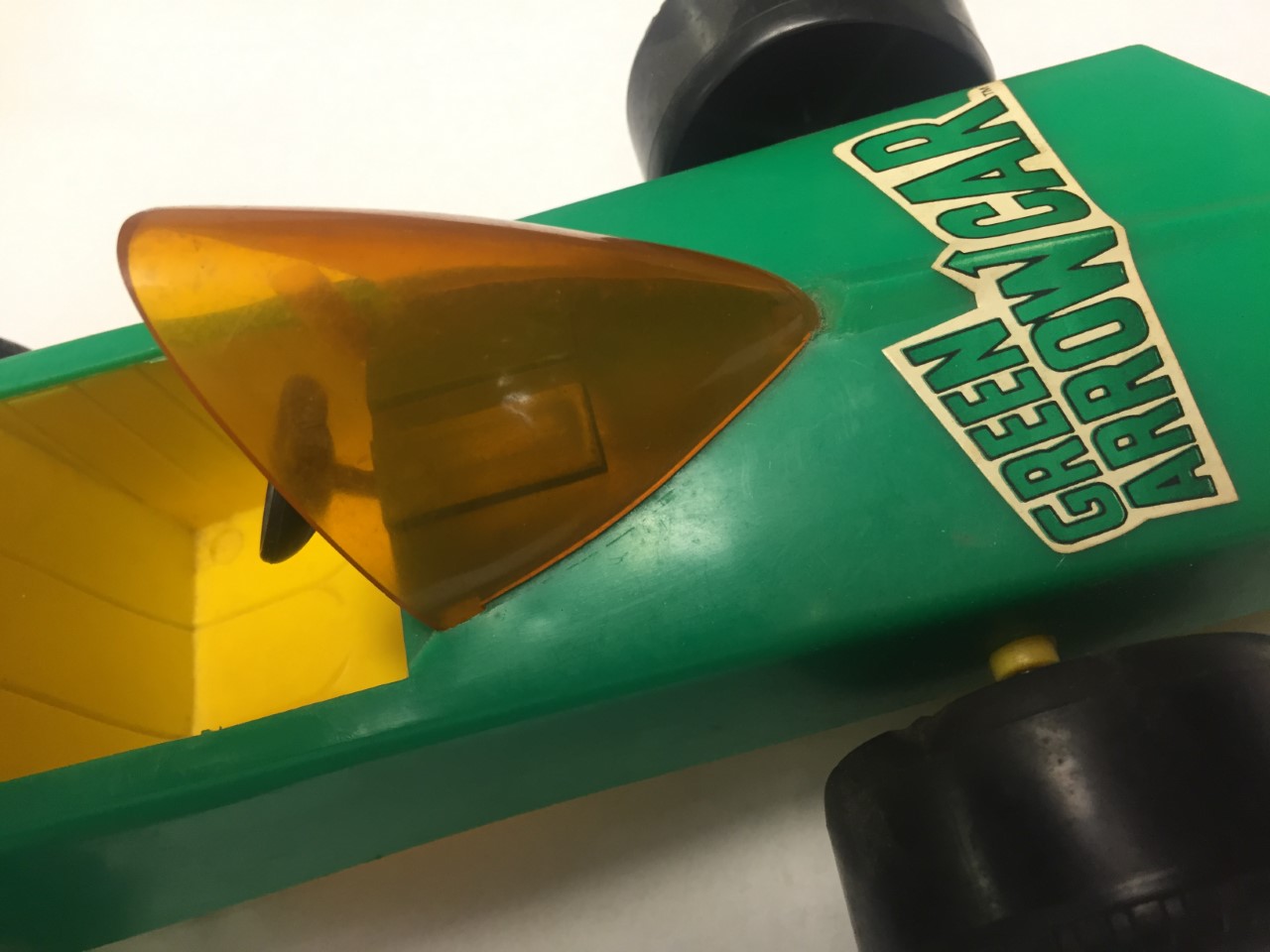 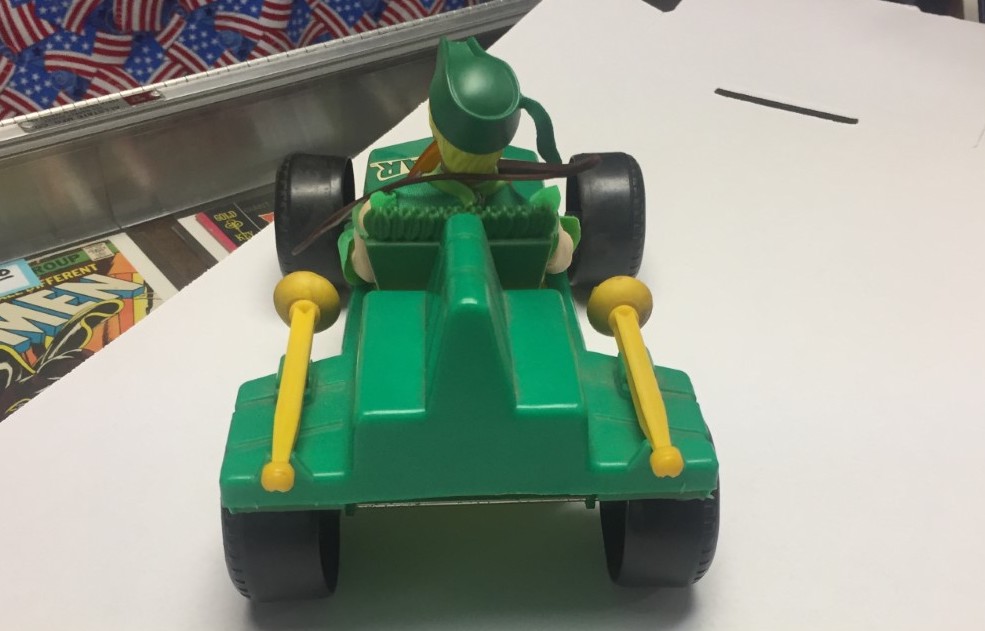 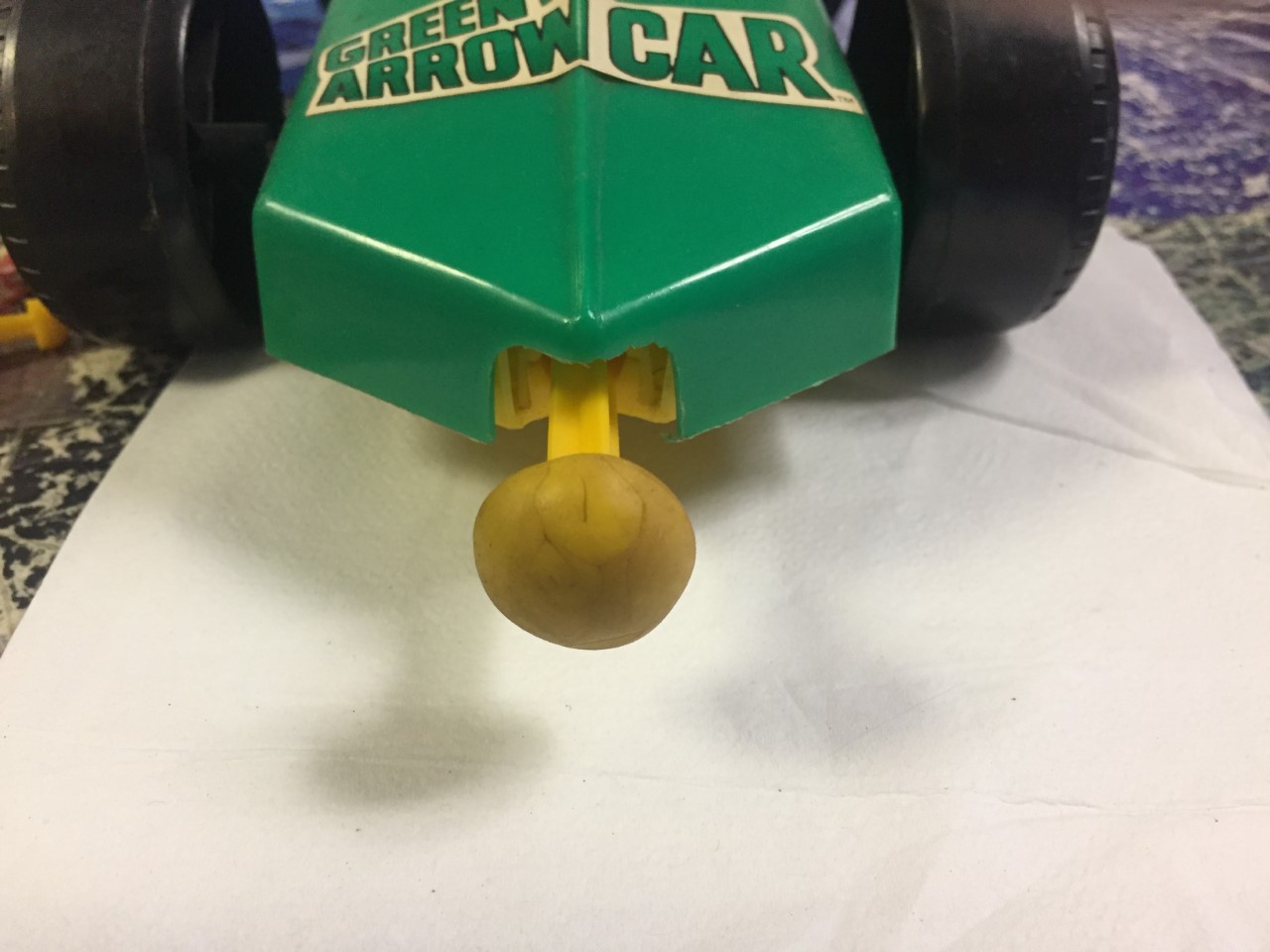 “I always say that the stuff we discover at that magical age of 10 to 12 years old is what stays with us for the rest of our lives,” Ron noted. “Nostalgia is a powerful, sometimes inexplicable thing. Part of me can look at the Green Arrow Car and rightly see it as a cheap, ridiculous piece of plastic. And there’s another part of me that looks at it and completely understands it being a holy grail, even decades later.”