MASTERS OF THE UNIVERSE: Remembering the Toys’ Debut — 40 Years Later

TOYHEM! By the power of Chris Franklin!

Christmas, 1982. I had just turned 8 years old a few weeks prior. I didn’t really know it at the time, but my beloved Mego World’s Greatest Super-Heroes line had ended, and the company itself was not long for this world. I wasn’t a military guy, so Hasbro’s new G.I. Joe: A Real American Hero line didn’t appeal to me… yet. What had caught my eye, was a new line of toys from Mattel called… Masters of the Universe.

Now, I don’t recall where I first learned of MOTU. Toy commercials on my local TV stations? Probably. But I most certainly had seen the line offered in the Sears Wish Book. The holy grail of all publications, receiving the Sears Wish Book was not unlike that scene from the film The Jerk where Steve Martin loses his mind over the arrival of the new phone book. The Wish Book was a pre-printed Christmas list. You just circled what you wanted, and Mom… or “Santa”… did the rest. For whatever reason, I wanted those MOTU figures!

Why? I’m not really sure. I had never been a fantasy guy. I knew who Conan was, but didn’t buy his comics. I was too young to see his R-rated movie earlier that year. Maybe it was the name of the primary hero,“He-Man.” In the fine tradition of Superman, Batman and Spider-Man, he had the right last name. Maybe it was the lead villain Skeletor. He looked SCARY. Skeletons meant death, and this guy looked like he meant business.

Adding to a great hero and villain was what looked to be a fascinating locale for them to fight over: Castle Grayskull. This had to be Skeletor’s place, right? It looked like him. But it seemed, early on, that the forces of good and evil on the planet Eternia were warring over who got to hang the curtains inside. And was this thing actually made of (gasp!) plastic? Not cardboard covered in vinyl like my beloved Mego Batcave and the Sears Wish Book exclusive Hulk Hideaway playset by Tara Corp. I had gotten a few years before? 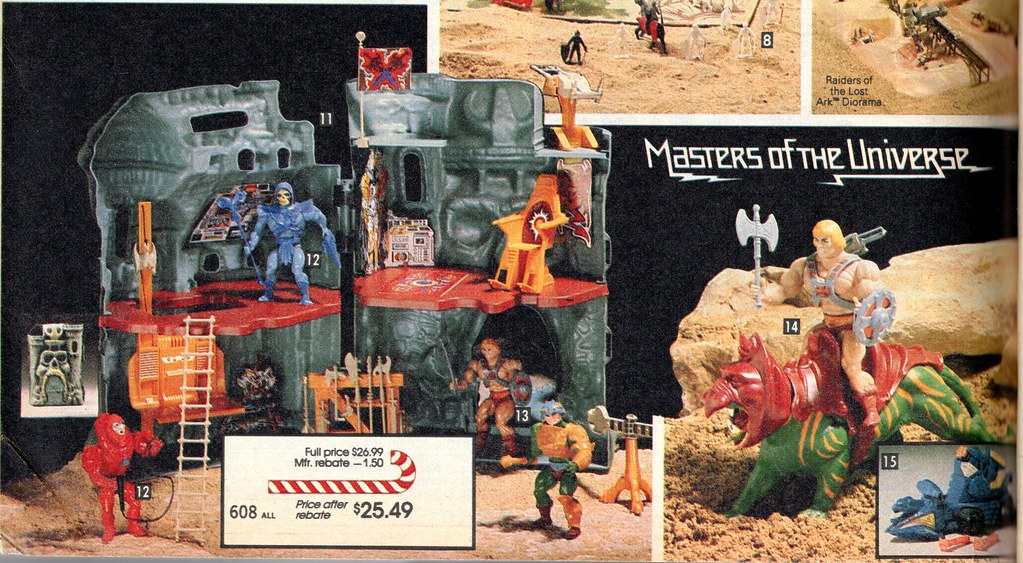 I circled all the MOTU offerings in the Wish Book, and waited with baited breath to see if Santa (or my parents) came through with the goods. The wee morning hours of December 25 came and I got out of bed around 2 a.m. I never actually slept Christmas Eve night. I just waited. Under our real live cedar tree (which we ourselves hunted and cut in a family tradition we uphold to this day) I found I had hit the jackpot. I didn’t have to wait till my parents and older sister got up to sneak a peek, because “Santa” never wrapped our presents. 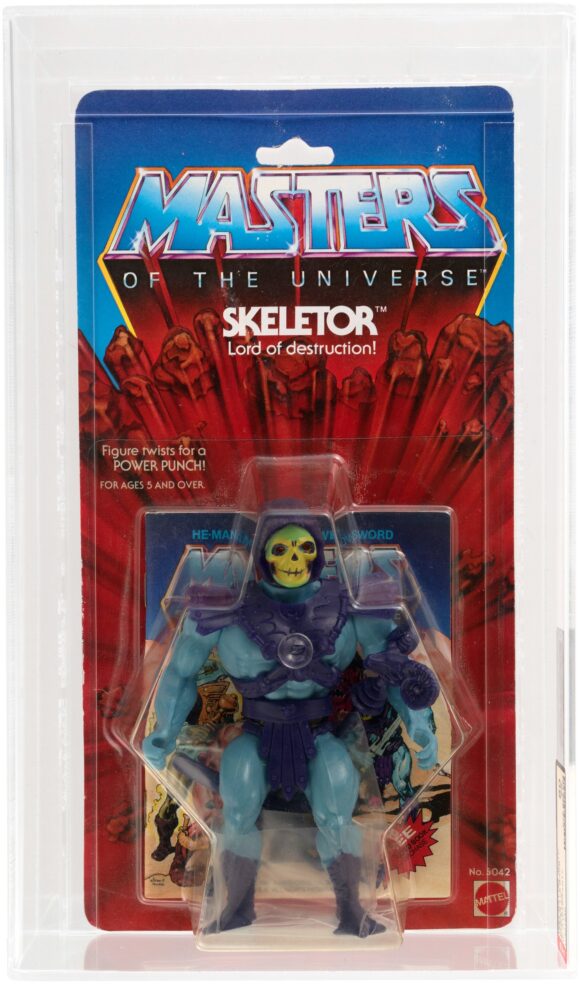 There was Skeletor, “Lord of Destruction” on his blister cardback, with the red rocks exploding behind the totally boss Masters of the Universe logo. “Santa” must have gotten him from another source, since Sears offered him as a twofer with his goon Beast Man (who I got shortly after Christmas). Thankfully “The Most Powerful Man in the Universe,” He-Man came packaged with his trusty steed Battle Cat to defend me from this grisly ghoul. Yes, I received the “gift set” with He-Man packed inside the box with his armored, green-furred “Fighting Tiger.” 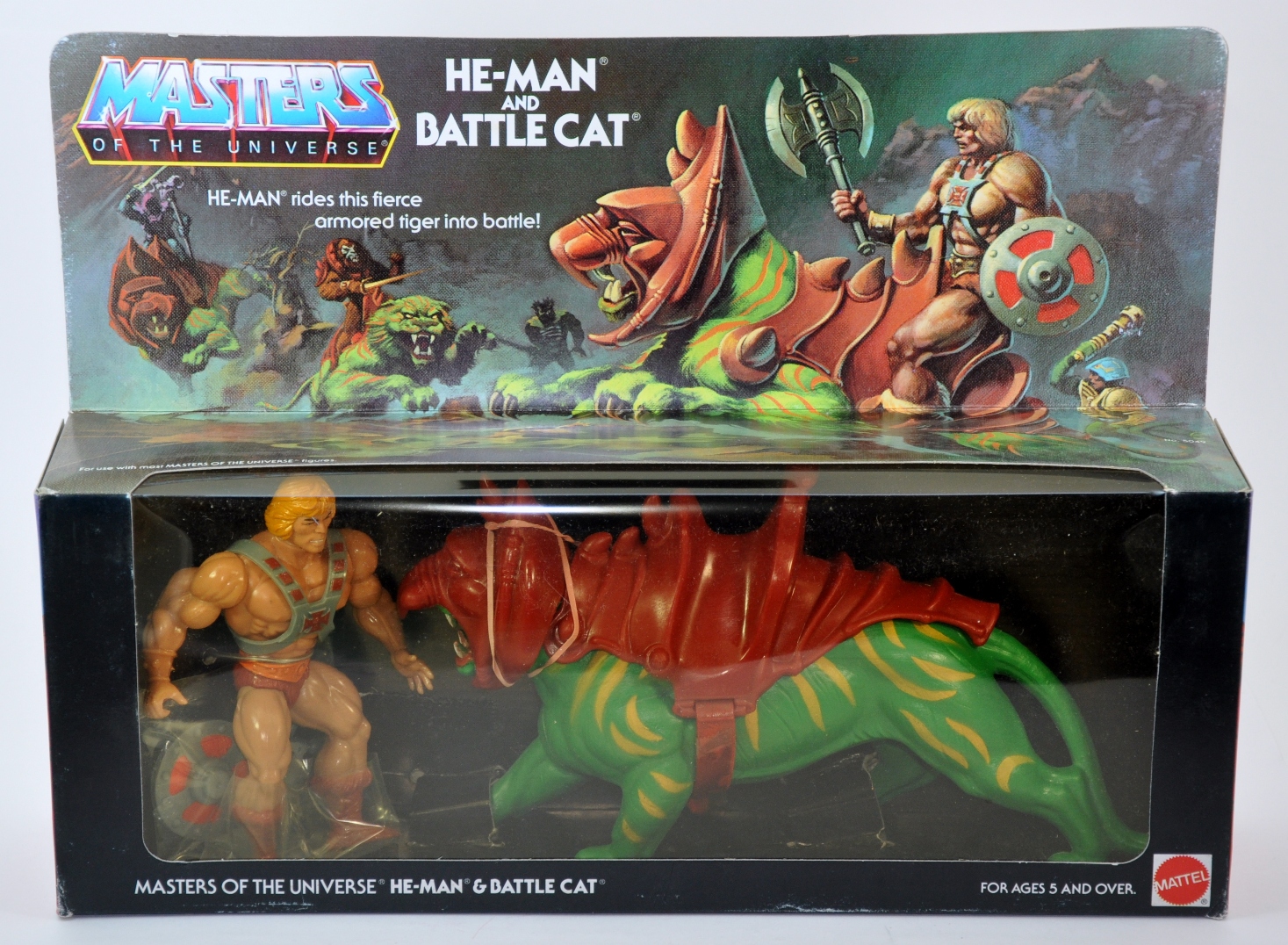 But looming behind them all was a large, dark box, sitting back among the lower branches of the tree. The room was dark save for the Christmas Tree lights I had turned on, so I couldn’t quite make out what it was. I pulled at the box, and noted it was heavy to my tiny 8-year-old muscles. I pulled anyway, and brought it into the light… and was instantly scared of what I saw.

There was the box for Castle Grayskull — “Fortress of Mystery and Power for He-Man and His Foes.” The box art by Rudy Obrero shows heroes He-Man, Teela and Man-At-Arms, along with villain Beast Man and somewhat neutral party Zodac perched on a ledge pointing straight to the opened maw of Castle Grayskull itself, Skeletor waiting inside the lowered jaw bridge. It was dark, it was foreboding, and it was more than my young 8-year-old mind could take with visions of sugarplums dancing in my head. I wanted this thing out of my house. It looked EVIL. 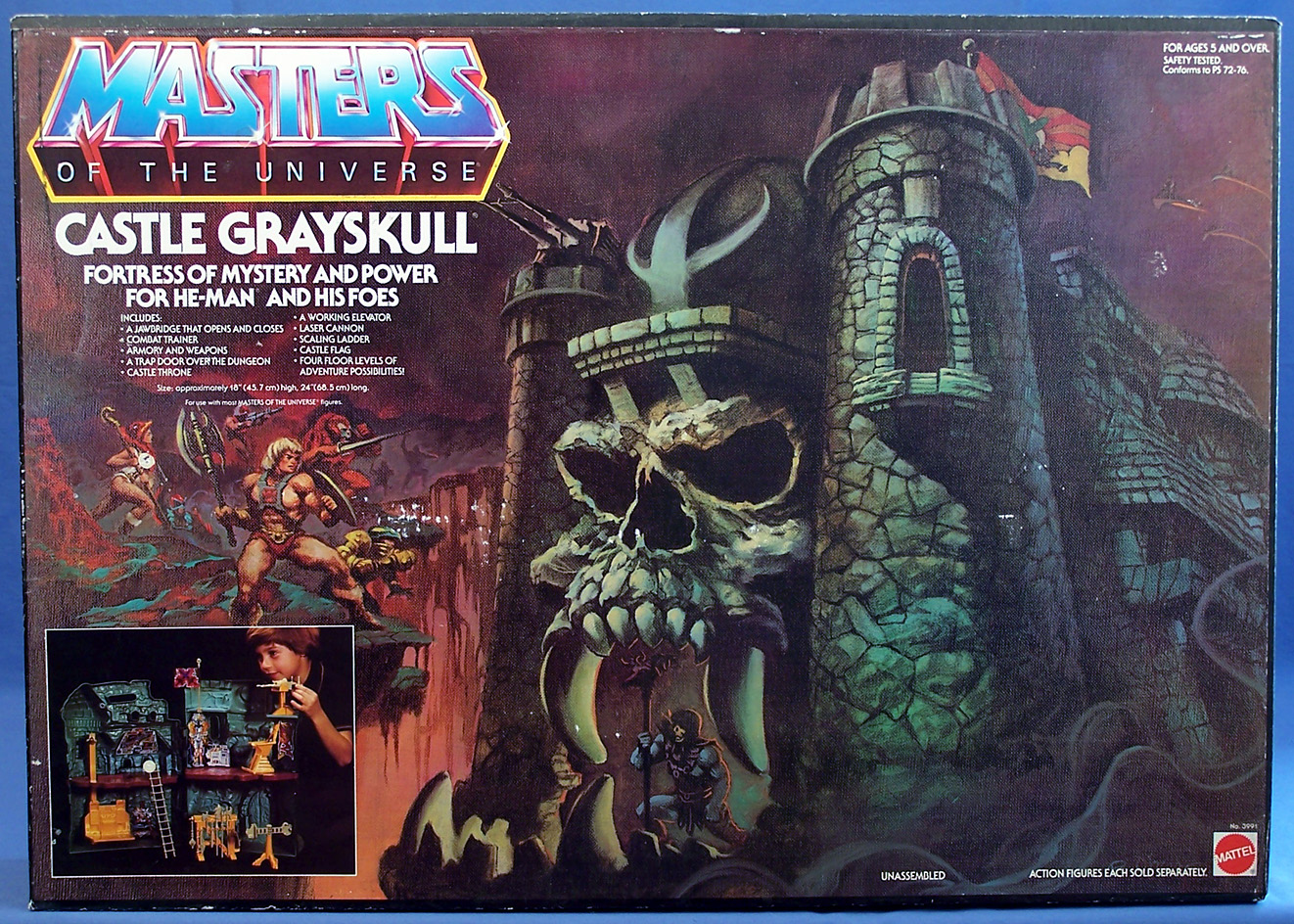 I couldn’t open my toys until the rest of the family woke up, so I just pushed the Frazetta-esque box back under the tree, and scooted as far away from it as possible. I probably looked at my other toys for the next few hours, or maybe the gifts I had received the night before from my parents, grandparents, cousins, etc. But I didn’t dare look at that scary box again!

By the time my parents awoke, dawn had cracked, and in the light, I wasn’t quite as scared as I was before. We began the ritual of looking over all the Jolly One had brought us, and then it was time to start ripping open packages, and putting things together. I don’t know if the instructions were difficult, or my parents were just tired, but they couldn’t make heads or tails of how to assemble Grayskull, so eventually I took over. It was the first time I had put something like that together on my own. From then on, I did all of the toy assembly that was required. 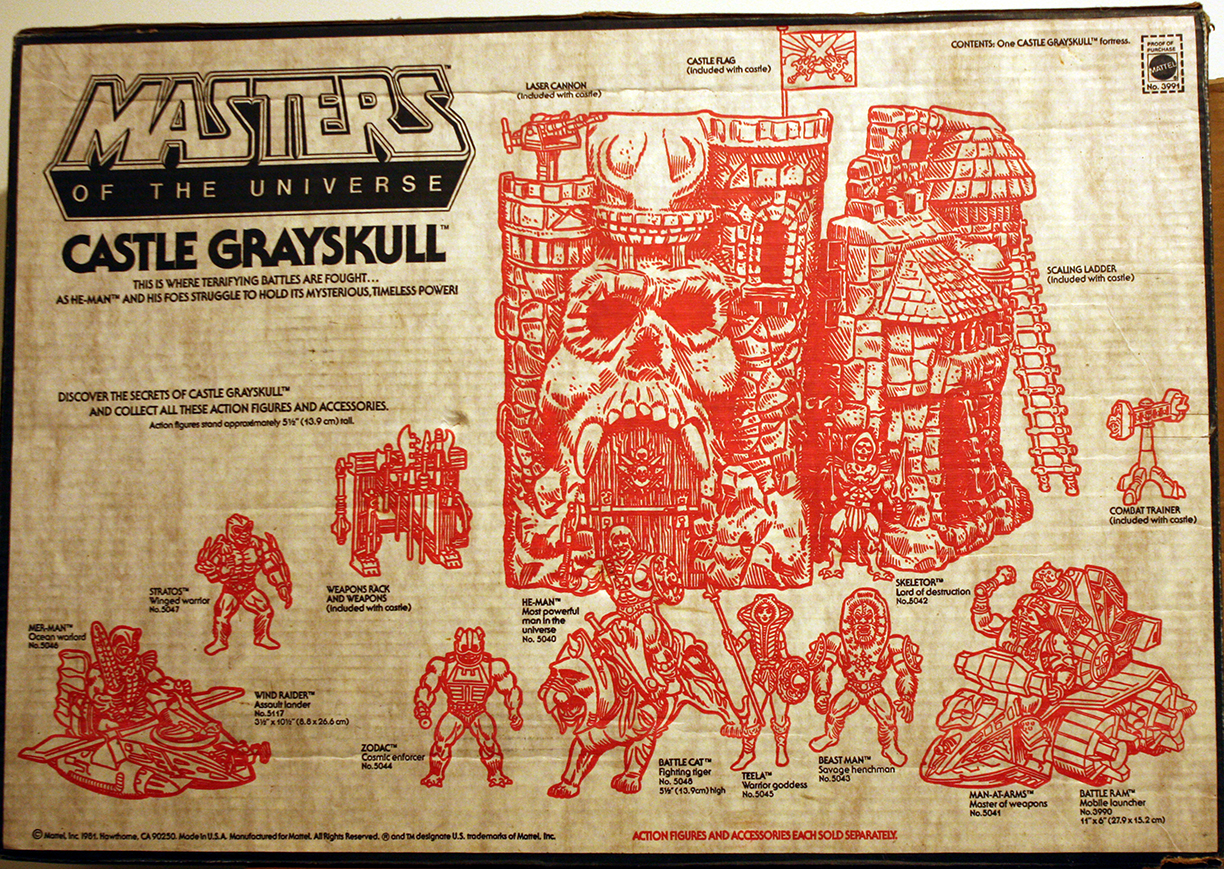 The scary box was thrown out in the trash, and my love affair with all things He-Man began in earnest. I devoured the included mini-comics that told the story of this noble barbarian who allied with other heroes against Skeletor and his horde of truly monstrous creatures. He-Man and Skeletor each had one half of the Sword of Power, which could unlock Castle Grayskull in both the comics, AND on the toy itself. With art by Alfredo Alcala (who would begin inking the Batman titles I regularly purchased in a year or so), I felt like I was reading something a bit more mature. Something with a bit more grit.

I began picking up MOTU figures, vehicles, accessories and playsets whenever I had any allowance money, and asked for them for Easter, birthday, and of course Christmas in the years that followed. The Filmation animated series He-Man and the Masters of the Universe began in 1983, and followed the back story first put forth in the DC Comics miniseries, that He-Man was really Prince Adam of the royal family of Eternia, who, in original Captain Marvel-like fashion, could call on the Power of Grayskull, and change into He-Man.

I loved the idea, but even as a kid, I knew Filmation had filed the teeth down on Castle Grayskull. The series had lost some of its bite, its darker underpinnings, in a bid to appease parent groups who were already troubled by the violence and mysticism inherent in the concept. That’s not to say I still didn’t love it. I did.

In addition to the action figures I had clothes, bubble bath bottles, erasers, a lunch box, you name it. I dressed as He-Man for Halloween 1984 in the Ben Cooper costume, modified with parts from the HG Toys He-Man playset (Power Sword, bracers, shield, etc.) and a pair of long-johns my Mom dyed Caucasian flesh color underneath. I had every major release MOTU item up until mid-1986, shortly before I stopped buying toys to play with. I hung onto G.I. Joe and Transformers a bit longer than MOTU. But I had, up until that point, done as toy companies always told us to do, and collected them all. 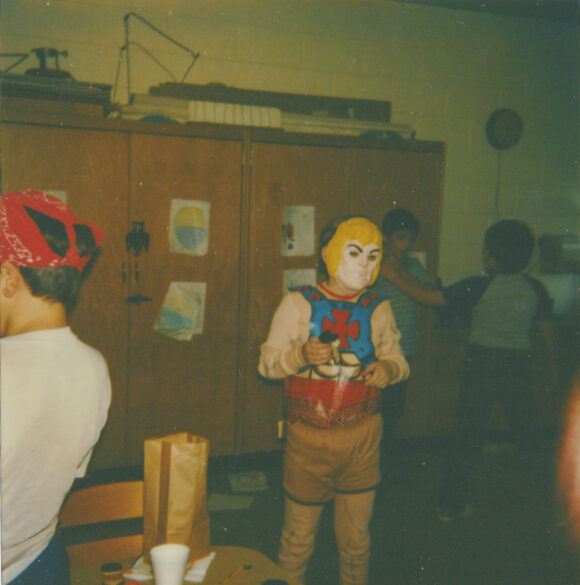 Chris at his Halloween 1984 school party

As an adult collector, I primarily focused on superhero lines old and new, so I didn’t pursue collecting MOTU, still having most of my childhood toys, many of them in pretty decent shape. The recently launched Masters of the Universe: Origins line has reeled me in a bit, buying figures of characters I missed the first time around, like the Sorceress, and old friends like He-Man, Skeletor and Battle Cat.

I haven’t bought their new Castle Grayskull… yet. I still have my cherished childhood copy, the same one I freed from that scary box 40 years ago. Some of the smaller accessories are lost, and one post on the drawbridge is broken, but I wouldn’t trade it for the world. In my mind, it’s the most iconic toy playset ever made. It’s dark, it’s a bit scary, and it’s just plain cool.

I really wish I hadn’t been such a wiener, and kept that beautiful box, but I still have that wicked-looking stronghold of mystery to admire. The power of Grayskull remains strong, 40 years later. 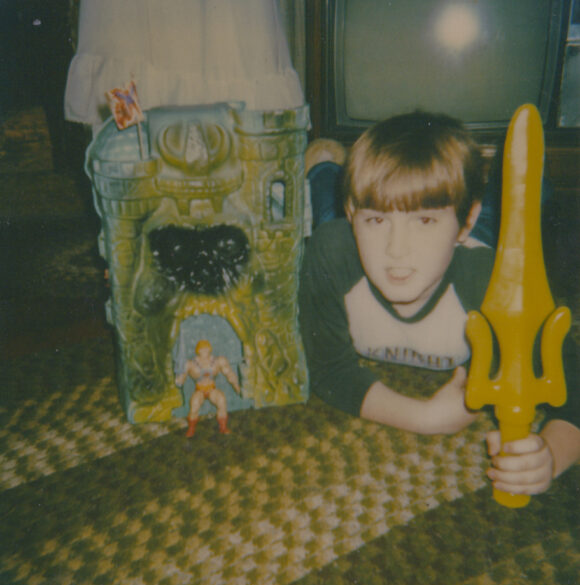 Chris Franklin is a graphic designer, illustrator, and podcaster, who co-hosts several shows on the Fire and Water Podcast Network, including JLUCast, which he produces with his wife Cindy. Fabulous secret powers were revealed to him the day he held aloft his magic Sears Wish Book, and circled Page 608.