I am an Original Generation Star Wars fan. I was almost 6 when I first saw the movie in its original theatrical release, and after that it was pretty much all I cared about. My family album even provides photographic proof. Here’s me at my 6th birthday party, and then me at my 7th. Notice anything different? 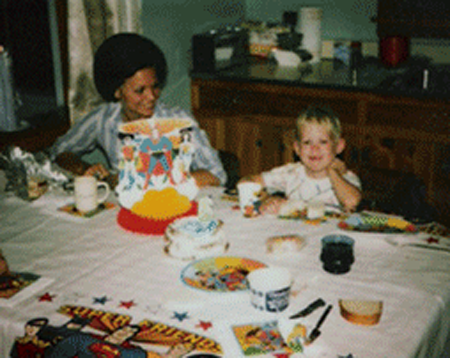 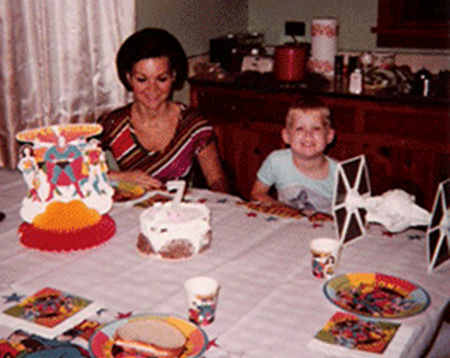 Like a lot of kids, I gobbled up Marvel’s Star Wars comic series as soon as it was released. In those pre-home video days, souvenirs of your favorite movies was all you had, so getting to re-live the movie via my favorite medium was two great tastes that taste great together. I even bought the two Star Wars treasury editions Marvel put out, even though they were just reprints of the first six issues of the regular comic, which adapted the movie. But, being a rabid Star Wars fan, you can imagine the excitement I felt when I saw this house ad at the end of Star Wars: Marvel Special Edition #2. 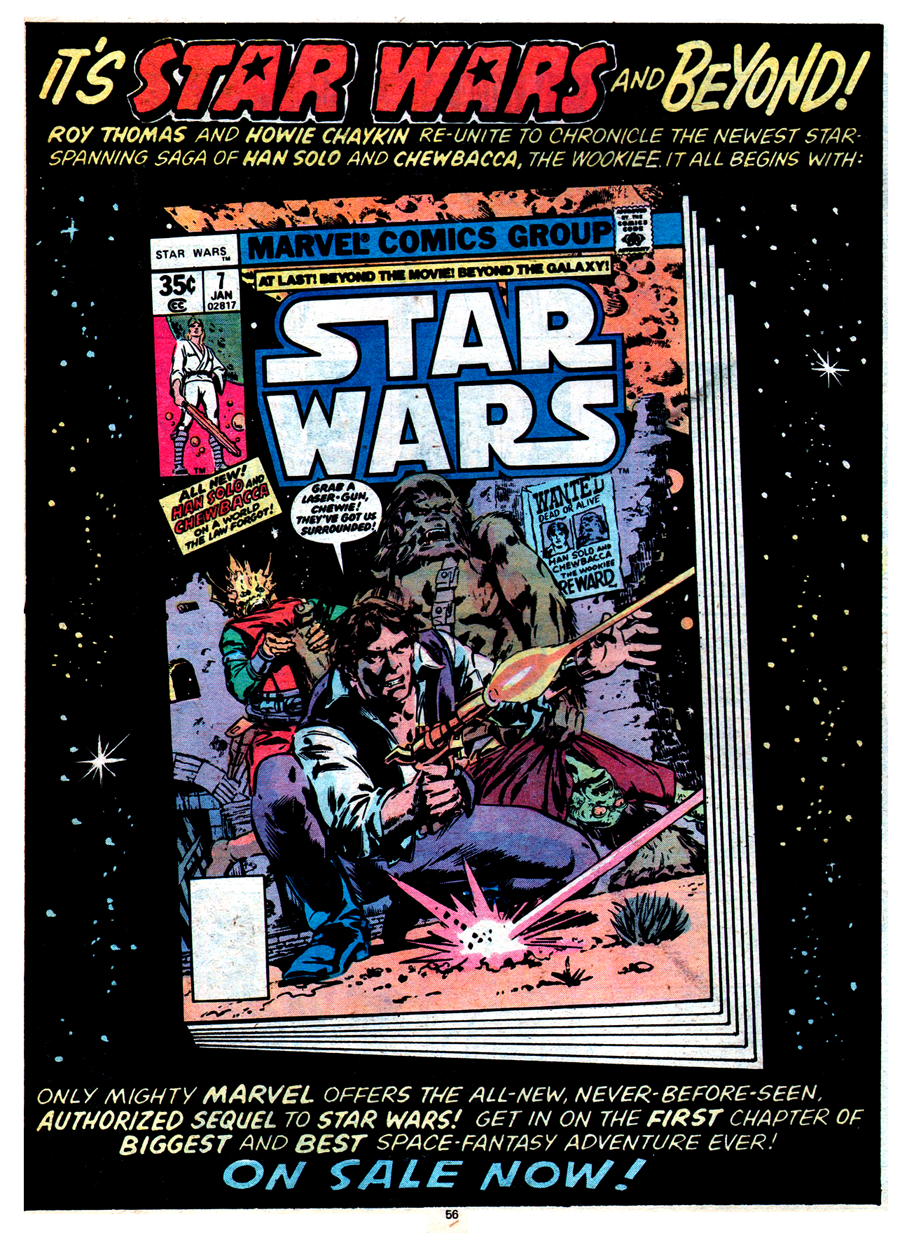 The idea of more Star Wars—that the story didn’t stop at the end of the movie — was more than my 6-year-old mind could handle. In those days, spotty newsstand distribution was something comic fans simply had to live with, so I knew I had to keep an ever-vigilant eye out for this comic. There were no guarantees I’d find it.

Then, one Saturday afternoon while shopping with my parents (The Gallery Mall in Philadelphia, PA, yo), I saw it: the cover to Star Wars #7, featuring Han Solo and Chewbacca squaring off against unseen enemies. I don’t remember what happened next; most likely I pointed to it and made some gibbering noises to my parents, who forked over the requisite 35 cents.

What I do remember is walking the mall with my face buried in the book. I literally bumped into people because I was not paying attention to where I was going, so enraptured at the idea of seeing new adventures set in the Star Wars universe. At one point we stopped in a department store so my Mom could try on some clothes, an event that would have normally bored me to tears and had me fidgeting mightily. But this time around, I didn’t care, because I was back on Tatooine watching Han and Chewie fight their way out of another scrape. I even remember an employee of the store making some comment to my parents about how engrossed I was in the comic.

The Gallery has a parking garage located in another building, with a glass walkway (shades of Bespin!) several stories above the city connecting the two. I can still recall the sound of walking across it, light streaming in from the windows, probably on my second or third full re-read of the story. While I had grown up on the Super Friends cartoon and was therefore aware that things I saw in the movies or on TV could live on in comic books, the power that original Star Wars movie held was so all-encompassing that getting to see these characters in another form was, simply, one of the most exciting moments of my young life. 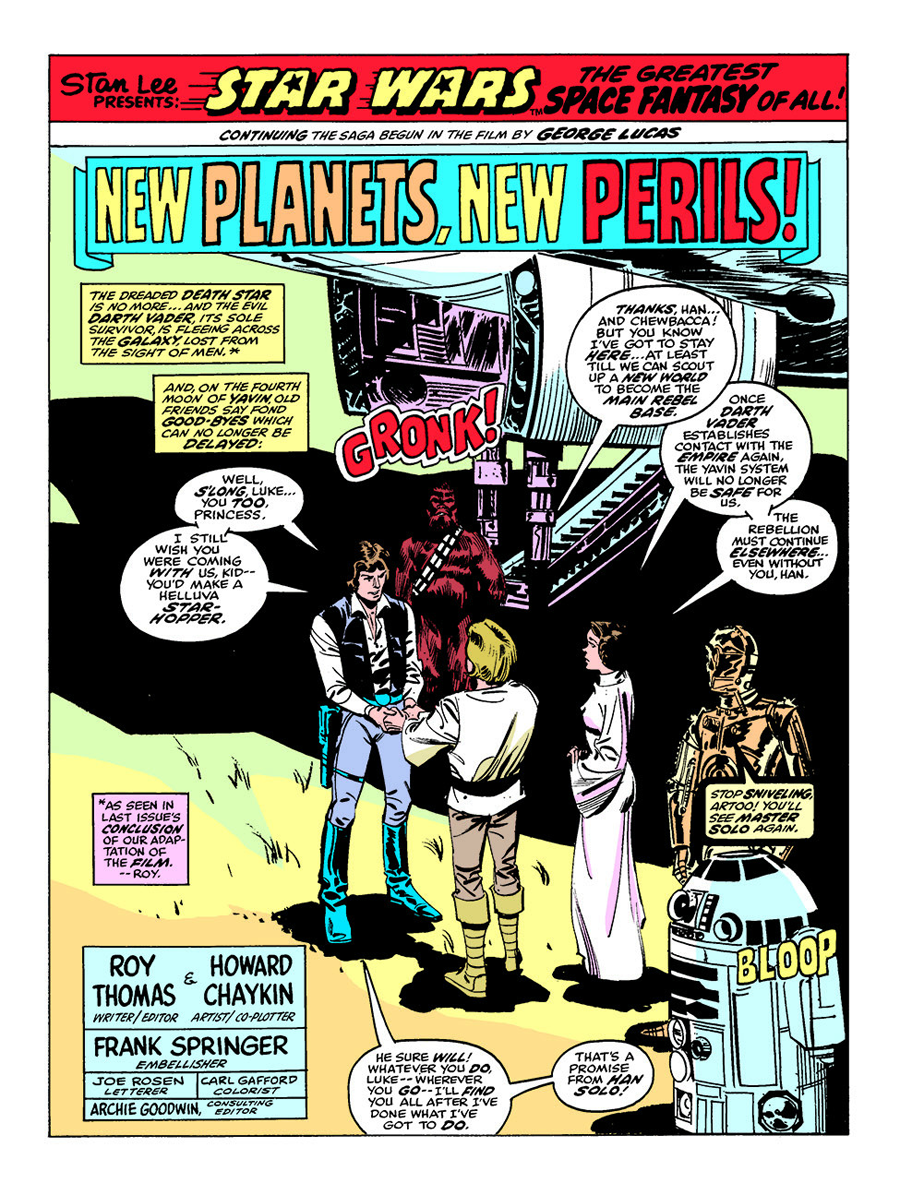 Over the decades, I’ve of course gone back and re-read Star Wars #7 (New Planets, New Perils! by Roy Thomas, Howard Chaykin, and Frank Springer), and am pleased to report the comic holds up quite well. It opens with Han and Chewie bidding a temporary farewell to Luke and Leia, so they can go back to Tatooine and pay off Jabba the Hutt. While on the way, the Millennium Falcon gets picked up by some space pirates, led by a scoundrel named Crimson Jack. Jack steals the money Han and Chewie were carrying, so our heroes hide out from Jabba on a nearby planet, Aduba-3.

There they are hired by an alien priest to bury the body of a recently deceased cyborg. Sounds easy enough, but Han and Chewie end up facing off against an angry mob who object to the cyborg being entombed on their land. Eventually they complete their task, stopping to rest at a nearby cantina, where they are propositioned by a group of locals who wonder if Solo has “an unfortunate aversion to dying.” To be continued! 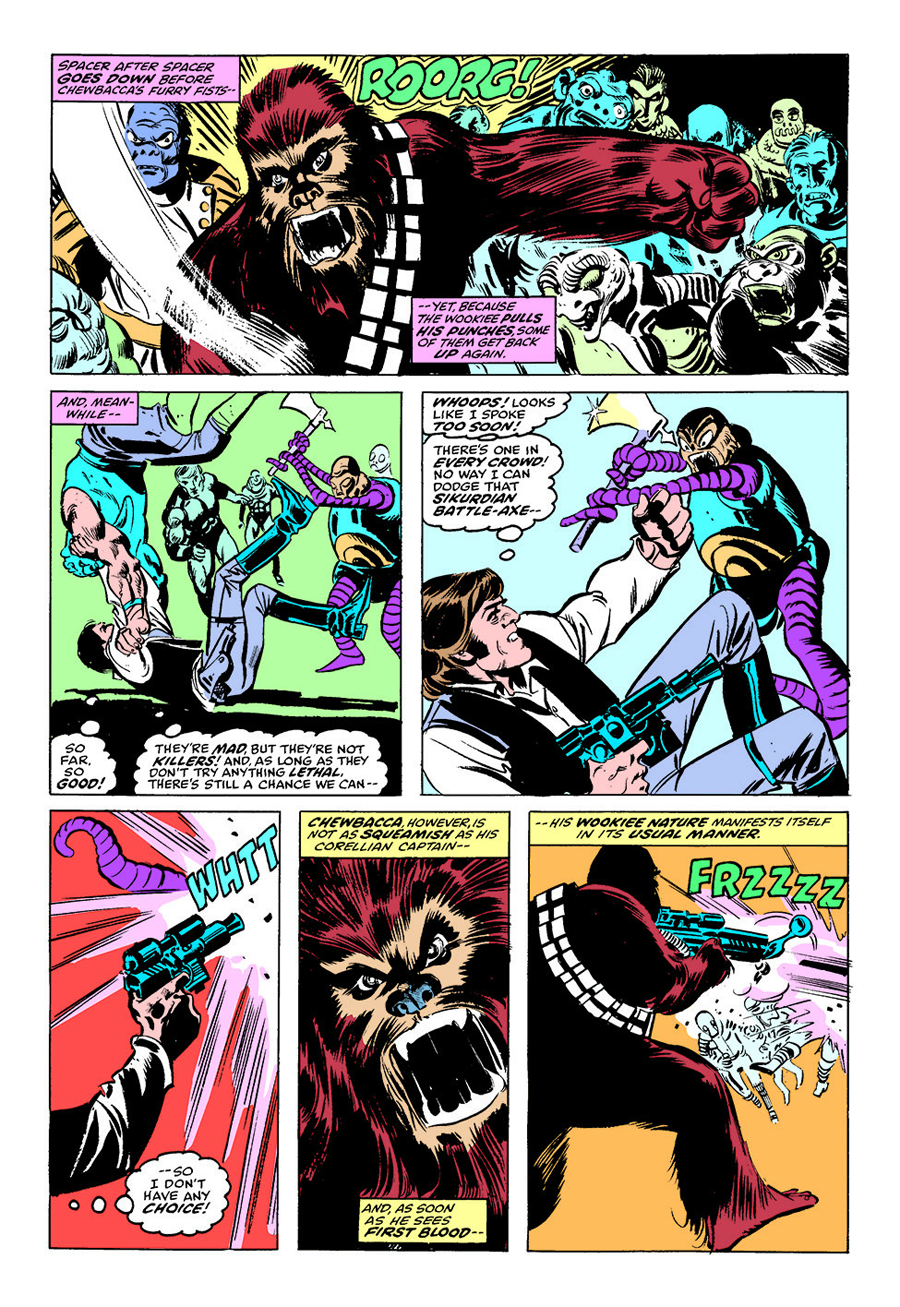 Roy Thomas chose the most logical path when expanding the Star Wars universe—namely, following Han and Chewbacca, since he was a lot more limited to what he could do with Luke, Leia, the Rebellion, and the Empire. The adventures of two space smugglers opens up myriad possibilities for envisioning new (and Lucasfilm-approved) worlds, alien races and bad guys, none of which are limited by a film budget. Indeed, there are some aliens here (like one that almost chops Han to bits with an axe) that would have been hard to pull off in live action, but are par for the course for a sci-fi comic. The story moves at a brisk clip, delivering lots of action, but the Han and Chewie we see here are recognizably the ones we saw in the movie. 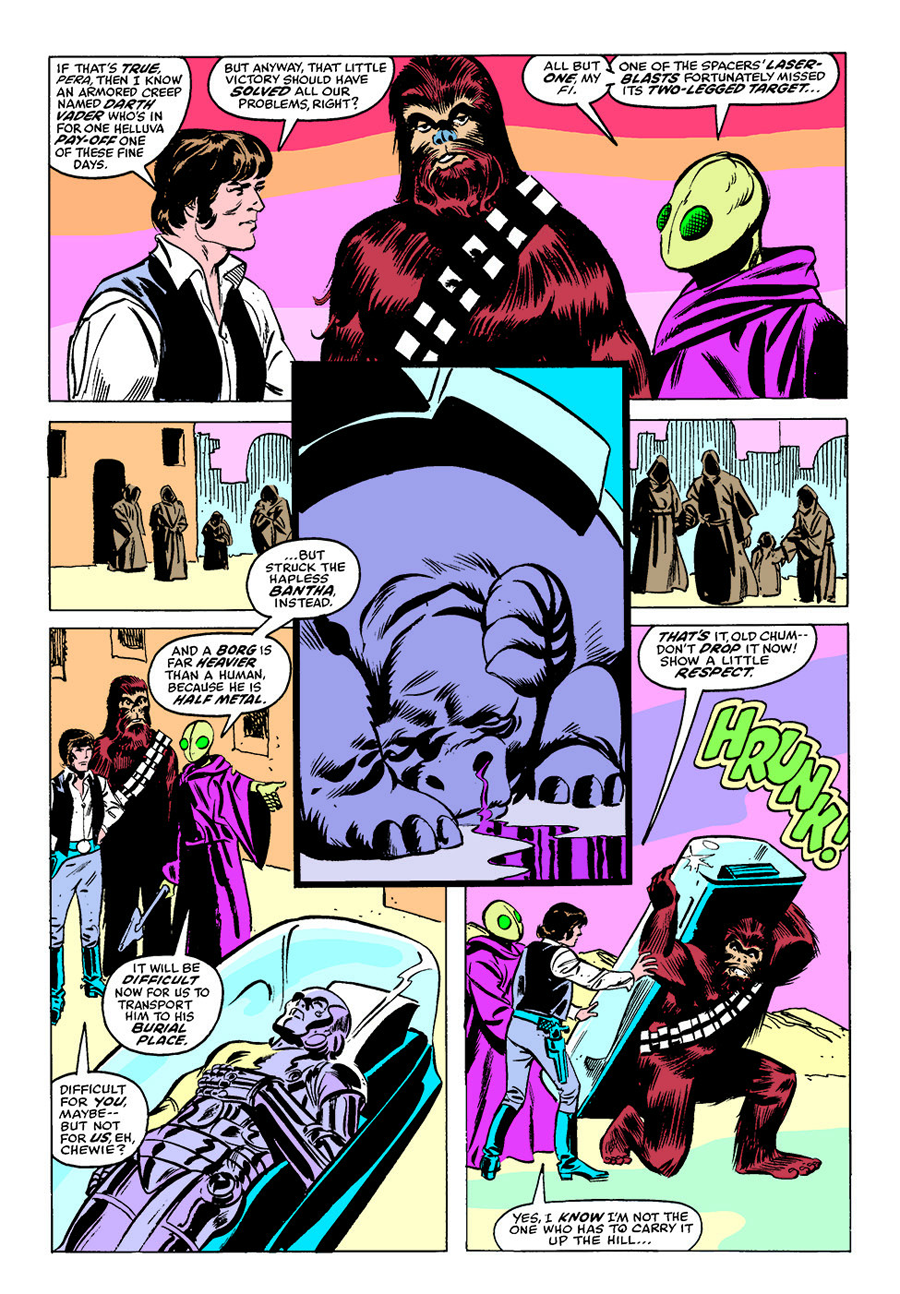 Star Wars #7 even manages a bit of pathos, when we get a close-up of a dead Bantha that was hit by an errant laser blast. The poor thing, eyes closed, purple blood dribbling out its nose, made quite an impression on the young me. I won’t say it kickstarted the deep love of animals that I have to this day, but Thomas taking a moment to reflect on the loss of innocent animal life is still something I deeply appreciate about the story. I would have loved to have had a Bantha as a kid (Dewbacks are too slimy).

Star Wars the comic would go on to achieve greater creative heights, and introduce some characters, themes and settings that I think stand shoulder-to-shoulder with the movies. But nothing will ever recreate that sense of excitement I had that afternoon in October 1977 when I realized that the Star Wars universe was more than just one great movie. I was taking my first step into a larger world.

— How I Became a Comics Fan, Thanks to Carmine Infantino’s DARTH VADER. Click here.

Rob Kelly is a writer, artist and comics and film historian. He hosts or co-hosts a number of shows for The Fire and Water Podcast Network, and writes the Reel Retro Cinema column for 13th Dimension. He’ll be seeing Star Wars: The Last Jedi the first showing on Thursday night.