Whether it’s Captain Steve or Captain Sam, I’m in for Cap …

As I noted when All-New All-Different Marvel, launched last week, I’m taking a moment every Tuesday to note which of the new titles I’m most interested in. I’m coming at this from the perspective of someone who is not steeped in Marvel lore. Rather, I’m looking at this as the proverbial “new reader.”

So when sorting through this week’s selections, Captain America #1 is a fairly easy choice. I’ve always liked Cap from a relative distance but have been intimidated by the amount of continuity that comes with him. 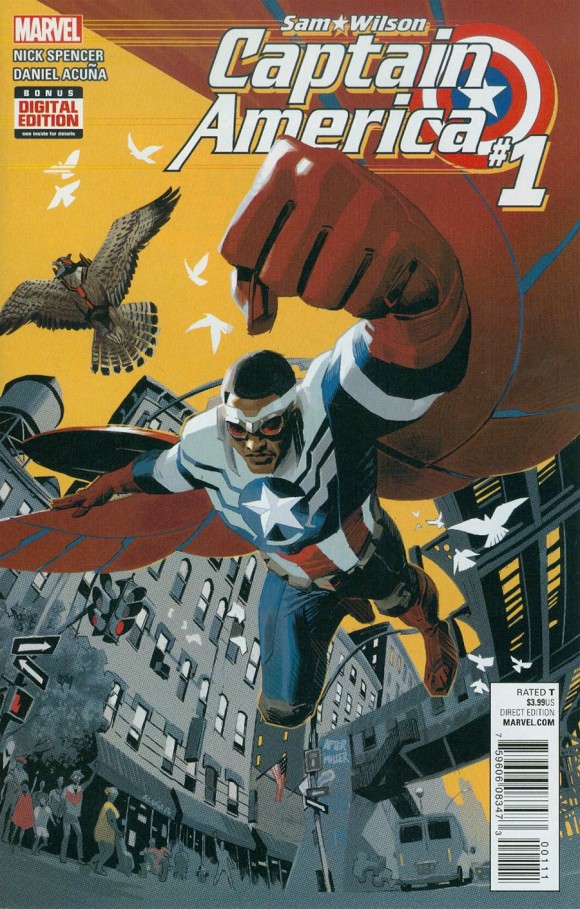 Of course, Sam Wilson has been wielding the shield for a little while, but that doesn’t matter that much to me. I’m looking forward to getting in on the ground floor of this supposedly new world from Nick Spencer and Daniel Acuna.

Then again, I’m not sure just how new this world will be. Amazing Spider-Man #1 felt like it picked up pretty much where it left off before Secret Wars, except that Peter’s now hopping the globe and Miles Morales lives in the same universe now …

ALSO ON THE MARVEL SHELVES THIS WEEK: Spider-Gwen #1 holds the most promise for me. I think I’m going to take a pass on most of the new Avengers titles, a couple of which come out this week. The groups seem randomly selected from this outsider’s eye. Too confusing. I’ll go with the main book when the time comes. I’m not planning on picking up Guardians of the Galaxy or Spider-Man 2099.