Martinbrough, Diggle and Thief of Thieves

Here’s a book you should be reading: Image’s Thief of Thieves from artist Shawn Martinbrough and, these days, writer Andy Diggle (plus Robert Kirkman, creator of The Walking Dead).

It’s a classic noirish/caper book, so if you’re into that kind of thing – and you should be – then this book is for you. The latest issue, #17, comes out Oct. 16.

At the old blog, I had an opportunity to talk to both Martinbrough and Diggle about one of the coolest books you can get your hot little hands on these days. Martinbrough even provided us with an array of art from the first 15 issues, including some terrific character sketches. 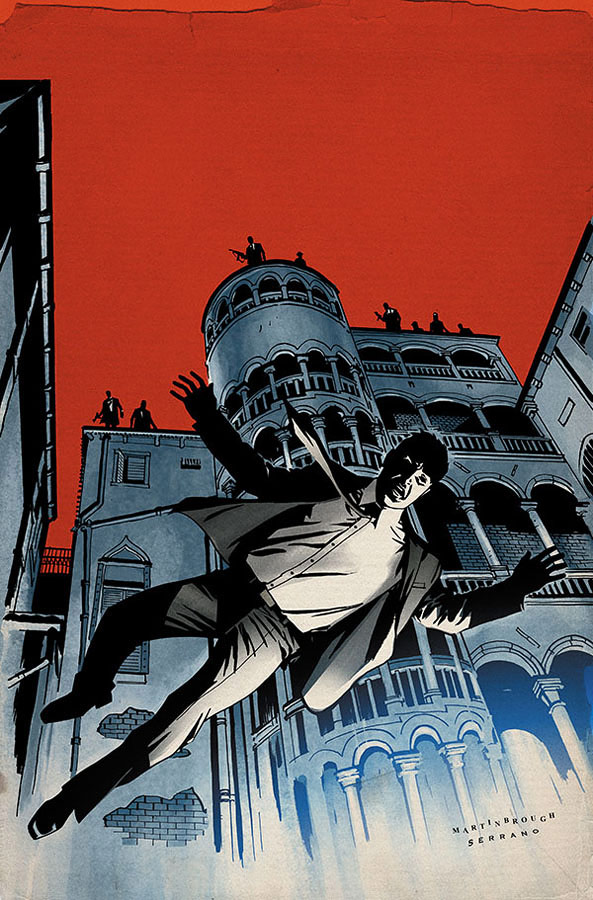 “The premise is centered on Conrad Paulson, a master thief who steals from other criminals in an effort to right the wrongs of his past,” Martinbrough explained. “Conrad wants desperately to make a life change and go legit but as the saying goes, ‘Just when he thinks that he’s out, they pull him back in.’ In addition to dealing with all of this, Conrad has FBI agent Elizabeth Cohen on his trail.” 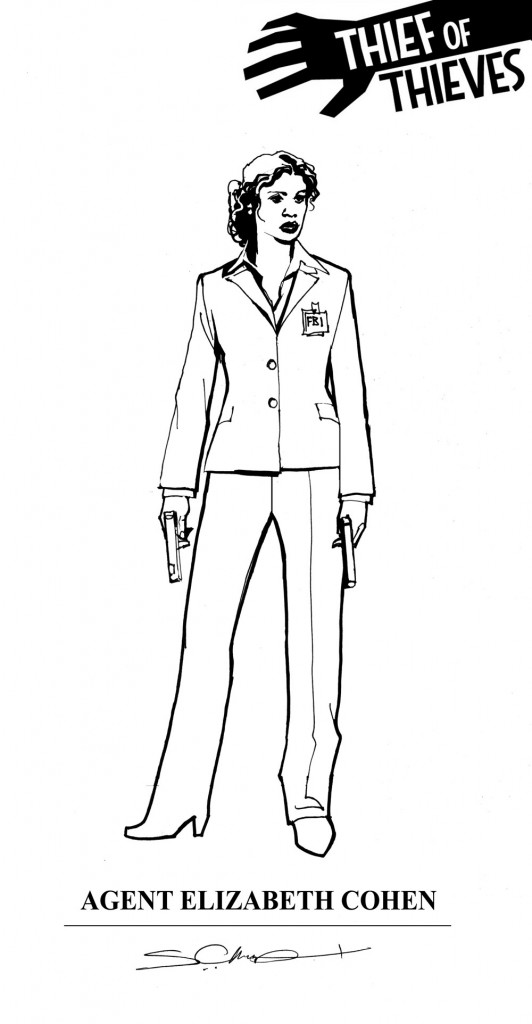 In the current arc, Conrad has to try to save his son’s life by pulling off a big job to pay off a big debt to big bad Lola, a psychotic South American drug lord.

Said Diggle: “Conrad Paulson – alias Redmond – is the world’s greatest thief. At least, he used to be. Now, after dedicating himself to a life of crime, he has come to realize that the things he values the most – his wife, his son, and the life they once had together – are lost to him. He wants them back.

“Conrad spent years planning the ultimate heist – the fabled “Venice Job” – but just when his hand-picked crew were ready to pull the trigger, he quit. He has promised his estranged wife Audrey that he wants to go straight, but she knows him better than that. … In order to save his son, Conrad is coerced into pulling off the long-planned Venice heist, with the obsessive Cohen dogging his every move. And as if that wasn’t bad enough, the target of the heist – the godfather of the Italian mafia, no less – has gotten wind of his plan. As the pressure builds on Conrad, his cool facade is beginning to crumble. The walls are closing in.” 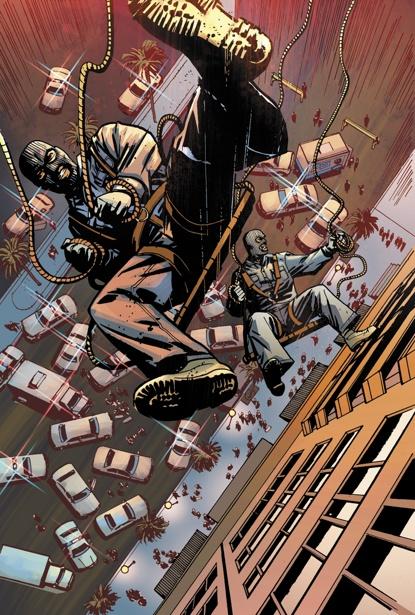 Martinbrough is the perfect guy (other than perhaps Darwyn Cooke) to handle this kind of slick storytelling. His style is an attractive combination of clean lines with a noirish and gritty edge.

“I’ve always been attracted to high contrast, noir type styles of art and basic storytelling is paramount for me,” Martinbrough said. “First and foremost, my job as the artist is to bring the writer’s script to life. This means using all of the tools in my artist tool box such as shadow and light, various angles to convey a mood and enhance the storytelling. After reading a script for Thief of Thieves, I create simple thumbnail layouts for each page. This is where I do all of my editing. I’ll play around with different angles, different approaches to lighting, etc. I’m always striving to create more of a visual impact with less information. There are so many times that I’ve labored over a drawing of a figure or object, adding details and then realized that it would be far more powerful of an image if I simply made it a silhouette. 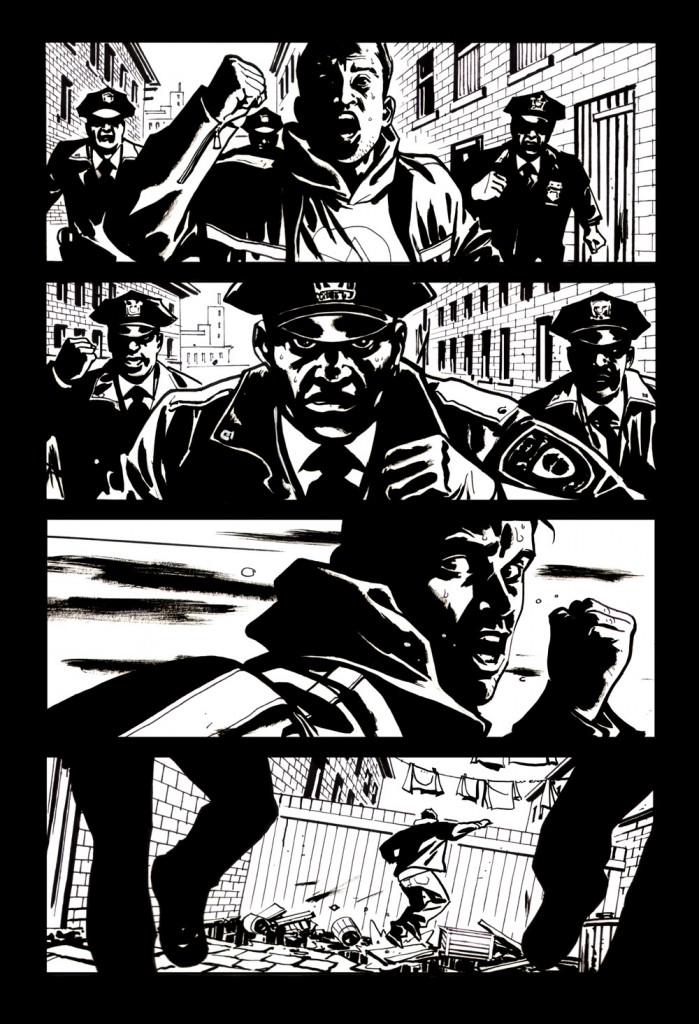 Dude knows how to lay out a scene.

“I love seeing how other artists solve the problem of telling a story and there are too many favorites to list. The great artist Alex Toth has always been a constant influence on my work. I grew up being inspired by Jack Kirby, Steve Ditko, John Buscema, Frank Miller, David Mazzucchelli, Walt Simonson, John Byrne and Mike Mignola just to name a few. Currently I’m really enjoying what Fiona Staples, Eduardo Risso, Goran Parlov, ChrisCross and Sean Murphy are turning out.”

Diggle noted: “I’ve been writing comics professionally for over a decade now, and I can honestly say that working with Shawn has been one of the most satisfying and enjoyable experiences of my career. He wrote the book on drawing crime comics – I mean literally and it shows.

“His sense of mood, pacing and composition are flawless, the characters live and breathe, the visual storytelling is crisp and clear… Really, as a comics writer, it’s all you could ever wish for. … I’ve found myself dialing back on the panel descriptions in Shawn’s scripts. I’ll sometimes suggest “camera angles” or ask him to open a scene with a wide establishing shot, but generally I’ve found that his sense of visual storytelling his way better than my own, so why would I try to direct him? It makes for a very easygoing working relationship and the results never fail to put a smile on my face. And I’m notoriously hard to please!” 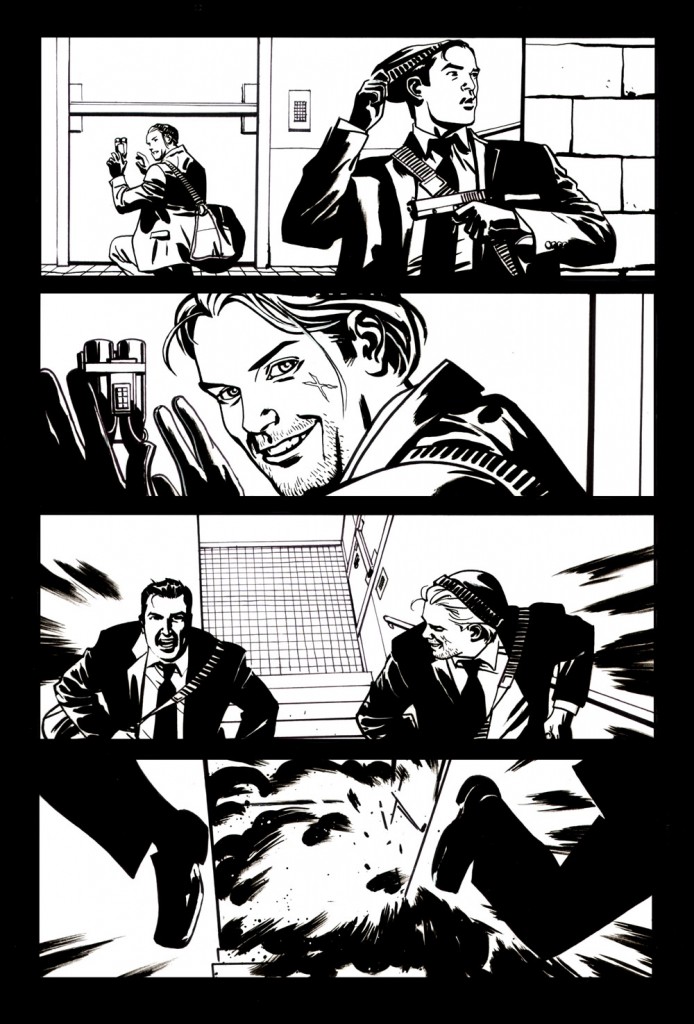 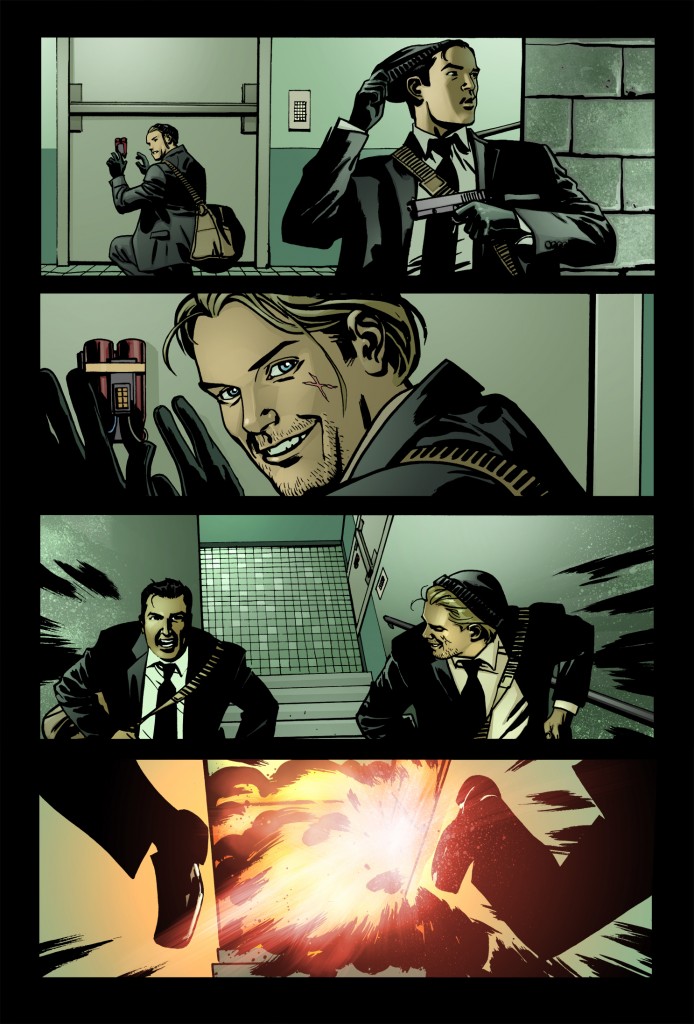 Before and after colors.

Martinbrough, a New Yorker transplanted in Washington, D.C., said he’s influenced by film and television and constantly absorbing content while at his art table.

“There are so many film directors that I feed off of,” he said. “A huge inspiration for me visually was the director Tony Scott. The lighting and composition in every frame of his films was simply gorgeous. I was really sad to hear that he passed. 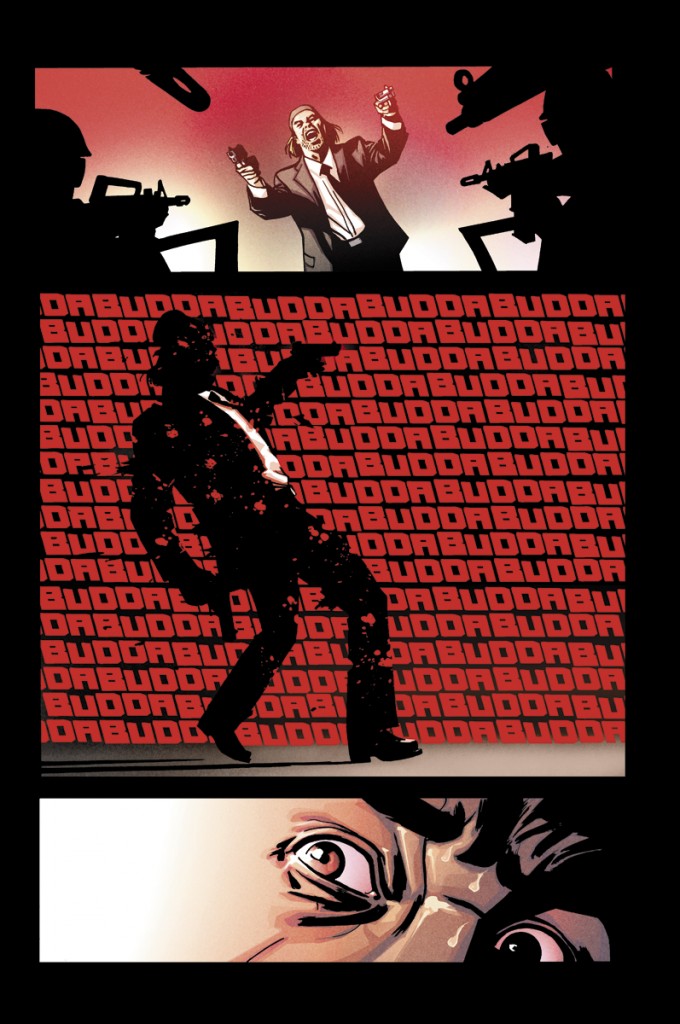 I love inventive use of sound effects.

“I try to visit galleries in SoHo and museums like the Metropolitan Museum of Art when I’m in New York or some of the great Smithsonian art museums in Washington for inspiration. Commercials, billboard advertisements, magazine covers and the like all feed my creativity as well,” he said. 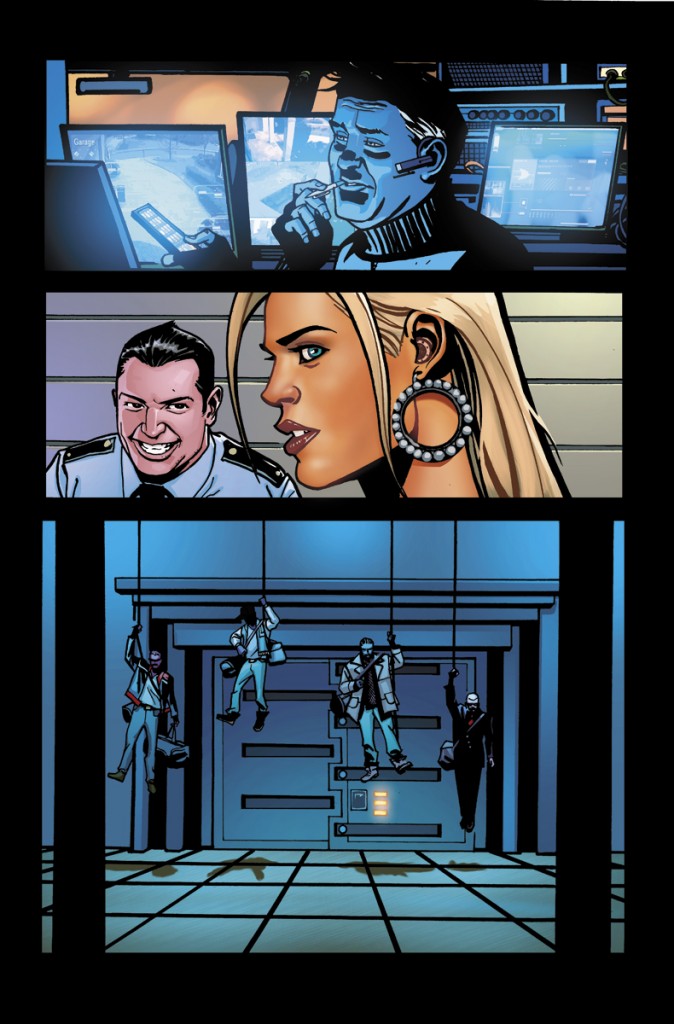