One of the all-time greats was born 94 years ago…

The late Joe Kubert was one of the all-time greats, no question. He left an indelible mark as a comics artist, writer and teacher and his influence will be felt for generations.

Kubert, who was born 94 years ago on Sept. 18, 1926, was best known for his work on DC’s war comics. That’s no slight to his other contributions, obviously, but the humanism and horror of armed conflict were a natural for someone of Kubert’s style and sensibility.

Recently, Chloe Maveal, the culture editor of the publishing start-up NeoText, wrote a piece looking back at Kubert’s war comics in light of the 75th anniversary of the end of World War II.

So instead of our usual 13 COVERS salute, we’re republishing the piece here, in slightly edited format. 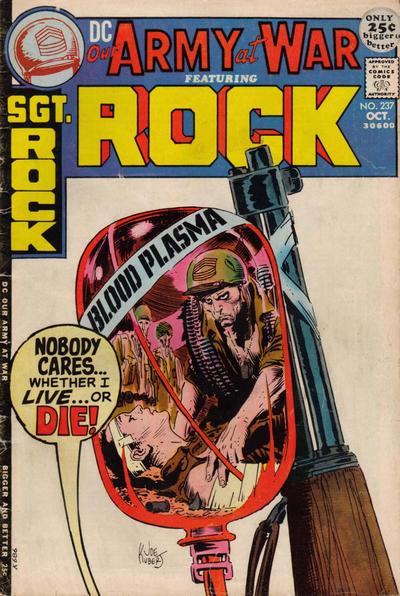 It’s undeniable that Joe Kubert left his mark on the comics world in more ways than one. You can’t throw a stone without hitting a portion of the industry that he had a direct impact on — including opening the Kubert School of Art, setting the aesthetic precedent for many superheroes through his incomparably fantastic pencils and inks, and serving as director of publications for DC Comics from 1967 to 1976, all while being a fantastic father and grandfather in the process. But with the 75th anniversary of the end of World War II, Kubert’s message of “Make War No More” seems more relevant than ever as we’re continually faced with the idea that violence is something to be glorified.

For those of you unfamiliar with DC’s iconic war comics, the publisher began printing a number of anthologies in the 1950s based on the war stories of its creators during World War I and World War II. Sitting between what would later be considered the superhero-dominated Golden and Silver Ages of comics, these titles were a way for DC to exploit the Next Big Genre while allowing creators to express their own personal experiences with life during wartime.

The popularity of series such as Our Fighting Forces and Men of War — some of which lasted until the mid-1980s — did, however, allow for some creators and editors to promote the idea that wars are something to be lauded, praised, and even anticipated with the hopes of producing stories of heroic behavior to share and publish.

Kubert, a Polish-American immigrant, however, took a very different approach to depicting war once he took over editing a number of DC’s titles in the late 1960s and ’70s, including Our Army at War (later retitled Sgt. Rock), Star Spangled War Stories, and the short-lived Blitzkrieg. Under his editorial eye — as the Vietnam War raged — the end of each story where characters were bloodied or fatigued from battle saw the inclusion of a round stamp with a four-word slogan: “Make War No More.” 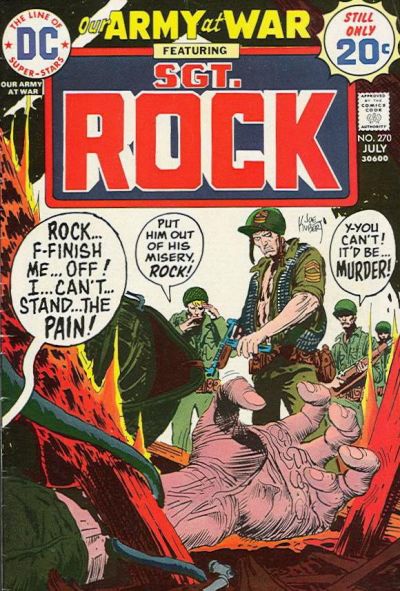 From 1968 to 1973, the fixture could be found at the bottom of the majority of DC’s war stories after first appearing in a Sgt. Rock tale. Despite his involvement in the creation of characters such as Rock, Easy Company and the Losers — not to mention his fantastic artwork adorning the covers of so many of DC’s war books — Kubert’s stamp was, perhaps, his primary contribution to an effort to encourage the young, impressionable and admiring readers to see the stories of war not as something to aspire to, but something to fear and fight against.