For almost as long as I can remember, Leonard Nimoy’s Mr. Spock has been one of the most endearing and enduring fictional characters of our culture.

I remember the first time I watched Star Trek back in 1967 — I was a mere 7 or 8 years old and we were at a business friend of my fathers one night, and they had a color TV. While the parents socialized in the living room, our host’s son, Ronny, and I watched something he called “Star Track”. A lot of people called it Star Track. Track or Trek, it was mesmerizing. I’d seen sci-fi B- movies on TV before, but this was so believable. Maybe it was the color — it was so saturated and bright; like the future. Through this new color television set, I could actually see into the future. And in that future was something called the “transporter”, which beamed the crew to the surface of far off worlds, a fearless captain, and a spaceman with a Beatle haircut and Martian ears. When I saw Mr. Spock, I was hooked, and I went home and the next day I drew him from memory for the next few weeks. 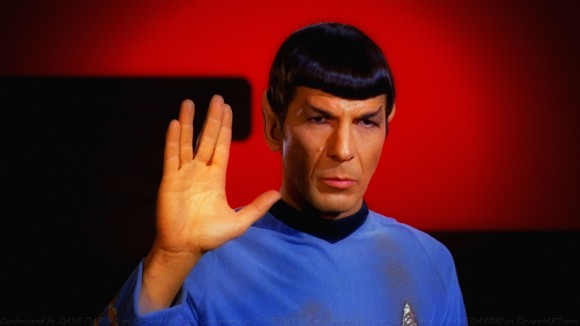 Back then, I wasn’t allowed to stay up and watch Star Trek, because my sister, Ginny and I were sent to bed at 9 PM every night. Only the rare occasion of a sympathetic babysitter interrupted my Star Trek blackout. It wasn’t until I was in my teens that I really got to watch Spock and friends on NYC’s WPIX channel 11. Like the Honeymooners and I Love Lucy, it seemed like it was on forever, and would always be there. As I got older, it was on in the background as I prepared to go out on Saturday night. It was on at my best friend Jack’s house when I’d go by to pick him up for our night out. We’d drink beer and watch Kirk and Spock save one planet after another, week after week.

There were a bunch of guys who worked for me in my screen printing business in the 1980s, and they were all into Star Trek. When the first Star Trek movie came out, about 10 or 12 of us went to see it together. Besides the music of the time, it was a great unifier — it was something we all loved. When I started making surf comics in the late 80s with some new friends in San Clemente, CA, they brought in a life-size black and white cardboard stand-up of Mr. Spock to inhabit our studio.

I never saw Spock or Star Trek as nerdy. In my world, punk rockers were into Spock, surfers were into Spock. He was the ultimate outsider, but he never seemed geeky — he was cool-headed, he knew what he knew. He was gonna lay down the logic. And he could kick ass when he had to.

Leonard Nimoy’s portrayal of Mr. Spock has been like a friend to millions of us who’ve followed Star Trek over the decades. And like the loss of any friend, we are deeply saddened. We know Nimoy wasn’t really Spock, and most of us have never met the man. But he touched us through the power of media, and I believe we are better for it. The character is an example of our higher selves.

When my co-workers/friends and I watched Wrath of Khan in the movie theater all those years ago, none of us could hold back our tears when Spock died. I sense the same feeling today. But we know Spock lives. Rest in peace, Leonard Nimoy.

Below is a poster I drew only two weeks ago to promote the East Coast Comicon‘s cosplay contest. 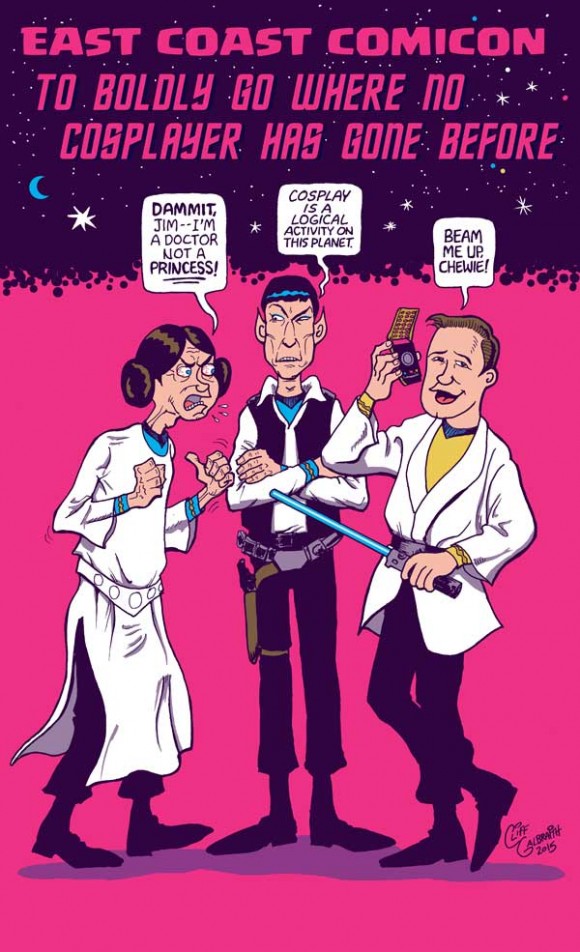