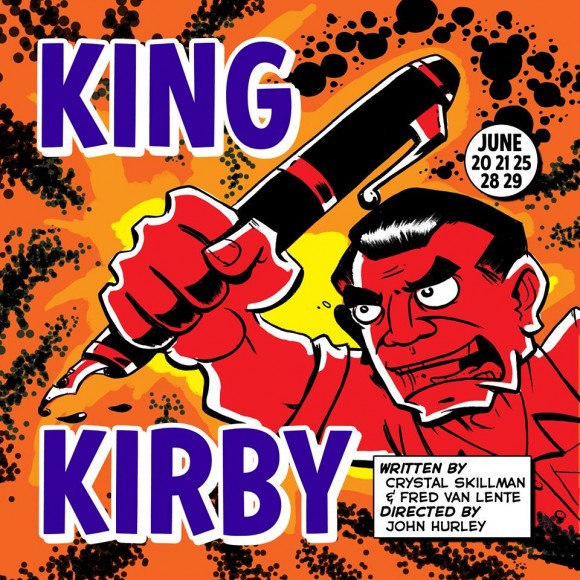 NEW YORK, NY — King Kirby, a play by the husband-and-wife team of NYIT-award winning playwright Crystal Skillman and New York Times bestselling comics writer Fred Van Lente about the life of legendary artist Jack Kirby, is set to premiere at the 2014 Comic Book Theater Festival in New York City — and the funds will be raised via a Kickstarter crowdfunding campaign that ends the moment the show hits the stage at 7pm EST, June 20.

King Kirby tells the hysterical and heartbreaking story of artist Jack Kirby, “The King of the Comics,” who created or co-created some of your favorite heroes on the page and screen, Captain America, the Avengers, Thor, Fantastic Four, the X-Men, Iron Man, Young Romance the New Gods, Darkseid, The Demon… the list goes on and on.

From the Jewish ghetto of New York’s Lower East Side to the battlefields of France to the Senate hearings of 1950s, King Kirby is a hysterical and heartbreaking story about a man who pours his quintessentially Twentieth Century life into his comics, only to make the fateful mistake that sends him into obscurity while his creations become known to every person on Earth.

A real-life “Adventures of Kavalier & Klay”, King Kirby asks what happens when an artist doesn’t own his own legacy? Can he ever get it back?

The show is set to premiere at this year’s 2014 Comic Book Theater Festival, starring Steven Rattazzi as Kirby, perhaps best known to comics fans as the voice of Dr. Orpheus from Cartoon Network’s The Venture Bros, and he’s joined by Amy Lee Pearsall, Joe Mathers, Nat Cassidy and Timothy McCown Reynolds. The director is John Hurley, who brought Van Lente and Ryan Dunlavey’s Action Philosophers comics to the stage for the first Comic Book Theater Festival.

“King Kirby has been a long-term passion project of mine,” said Van Lente. “With Crystal’s help, it’s down on paper. Now, with your help, we’ll bring this crucial piece of comics history to life on stage.”

King Kirby Kickstarter awards include a 60-page exclusive Evil Twin Comics Jack Kirby Comic Book Comic from their Comic Book History of Comics GN, a handsome book containing the script and production skills, an audio recording of the play, signed playbills, and a signed Simon & Kirby print created by Ryan Dunlavey for the show, signed by the artist.

The Kickstarter can be viewed here: https://www.kickstarter.com/projects/384572388/king-kirby-a-play-by-crystal-skillman-and-fred-van

King Kirby opens on 7pm EST on June 20 at the Brick Theater in Williamsburg, Brooklyn. For showtimes and purchasing tickets, go to http://bricktheater.com/index.php?type=show&id=966%22%3Ehere.%3C/a%3E