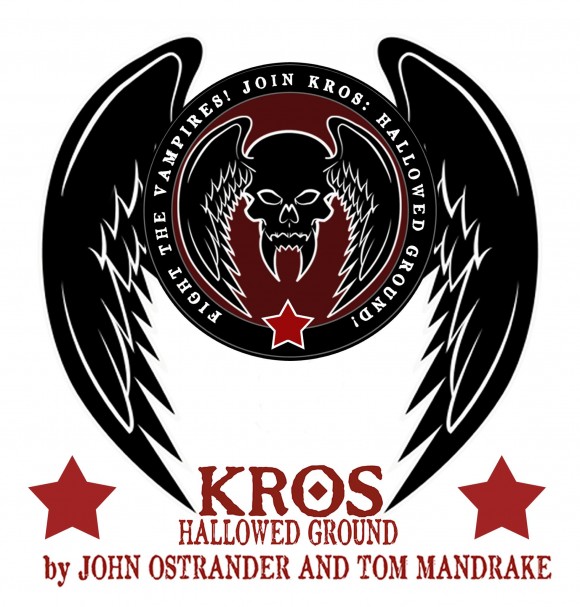 Kros: Hallowed Ground is set in the Battle of Gettysburg. Since it is down to the wire for backers — check out the link here — we asked Tom and John some questions about their beautiful and spooky Civil War comic. (The Kickstarter closes 7/30.)

John Ostrander: We’re juxtaposing the horror of the battlefield with the horror of vampires feeding on the wounded. Men fight each other during the day and the vampires come to feast at night on the wounded. Imagine that you were part of that battle; imagine you were wounded and no one has had a chance to take you away to the horrors of the surgeons and any hope for survival. You lie there in pain, unable to move, unable to call for help. You feel your life is ebbing away. It’s dark and you can’t see very well. And then a shape comes up, a shadow in the darkness. This shadow has fangs. It’s a vampire and it’s come to suck your life away.

Against these monsters we set a dampyr, a vampire hunter, named Kros. He is something of a monster himself; he doesn’t care about the war, who is winning, what the causes are. He doesn‘t even much care about the wounded. He cares only about destroying the undead. As a dampyr, he is a sort of cousin to the vampire and he has some of their abilities, but also a potentially fatal weakness. If he ever tastes human blood, Kros will become the thing he hates.

At Gettysburg, Kros will find the forces ranged against him greater than he conceived and he may well be overwhelmed. Even if he wins, will it be at the cost of his last vestiges of humanity? What will he then become? 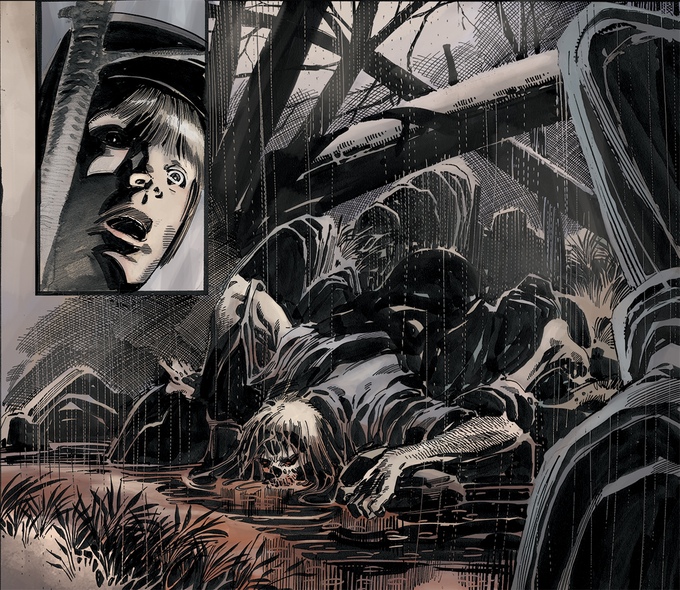 Do you think there may have been vampires and werewolves in the Civil War… or are there any out there now?

Ostrander: There is no historical record of them, only legends, but there wouldn’t be, would there? Assuming vampires DID exist, would they not have come down through history? People emigrated from Europe, from Asia, from all over and came to these shores bringing with them their culture and their practices. Many wonderful things came with them that have enriched our culture, but some bad things would also have come along and vampires would have been one of those. Great battles would have called to them; as we say, blood calls to blood. Like vultures, like carrion-eaters, they would have come to feed after the battle.

Do vampires exist today? There are all sorts of beings who feed upon others, destroying their lives. Alive or undead, are they not vampires?

Is this historical fiction based in reality?

Tom Mandrake: There was real horror at Gettysburg for certain—so in that respect the events which take place in Kros are based in reality. We’re bringing a supernatural element into the mix—vampires and a vampire hunter. The tale we’re going to tell is about a second battle that was never recorded for the history books. Let’s hope that the vampires don’t win. 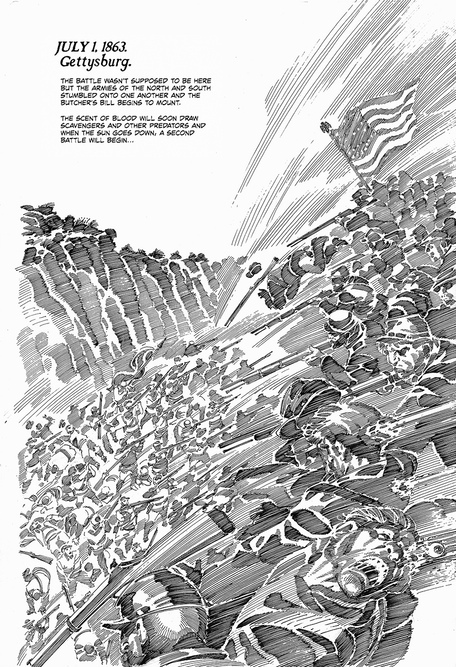 The art looks knock-out amazing! Is this all pen and ink?

Tom Mandrake: Thanks, I’m glad you like it! I am working traditionally, all pen, brush and ink. I really do love the feel of traditional tools and will always choose them first. I’d like Kros to feel like it’s a bridge to classic comic book horror as well as being something brand new.

Where does Sian Mandrake come in for the colors?

Mandrake: Well, for anyone who doesn’t already know this, Sian is my daughter. We’ve worked together on several projects, including John Carpenter’s Asylum, X-Files for IDW and Suicide Squad for DC Comics. Sian is an excellent traditional painter as well and understands what I want from the color, which is no surprise since I brought her up on a steady diet of horror movies and X-Files episodes! 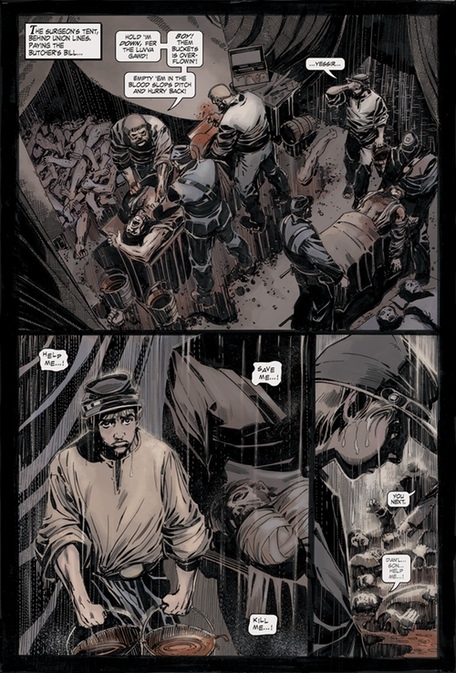 Is that digital? She seems to be going somber with the tonality to let the inks shine.

Mandrake: Sian is working digitally. We have had long discussions about the kind of look we wanted for Kros. We took influences from old sepia-toned, hand-colored photos from the era. We want some color, but we’re pushing the saturation way back to allow the ink line shine through. It was a bit complicated, a bit “I’ll know what I want when I see it” at first, but I think that Sian has really nailed it!

Is this the first Kickstarter for this all-star team? You’ve done many books together.

Ostrander: It is our first Kickstarter. We have a clear vision of what we want this story to be and how we want it presented and the only way to make certain of that, in our eyes, is with crowdfunding such as Kickstarter. The fact that we’ve done so many books together gives the reader and potential backer some idea of what the quality will be in Kros: Hallowed Ground. We know our stuff and we play well together. I think the fans will love it.

Mandrake: We’ve done monthly titles together that add up to roughly 14 years worth of work—so yes, that is a lot of books! This is our first Kickstarter. After all those projects we’ve done in other people’s universes we felt it was time to create a universe of our own! 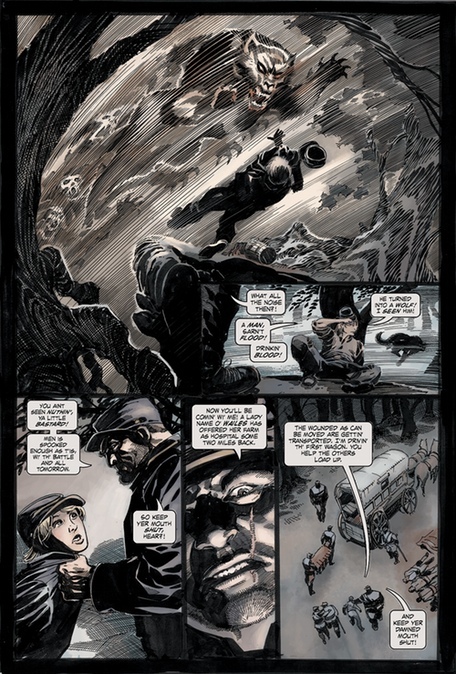 The Kros Kickstarter ends Thursday, 7/30 at 1:25 PM EDT. The link can be found here. There’s also a website that links to the Kickstarter here.