INSIDE LOOK: Dave Gibbons and Ryan Sook gave us a wonderful and wondrous adventure of the Last Boy on Earth… 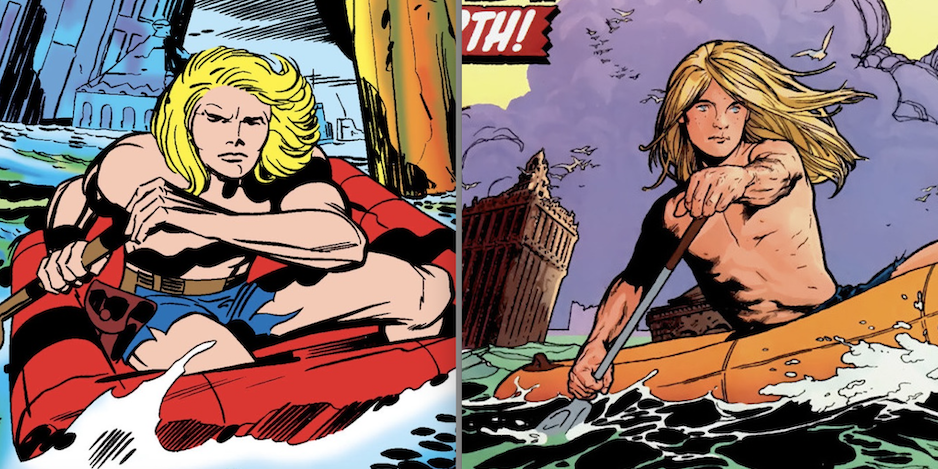 People just don’t talk enough about Wednesday Comics, DC’s 2009 experimental anthology that attempted to replicate the Sunday funnies experience with a miniseries that included stories told in 12 weekly parts, printed as a broadsheet on newspaper stock.

Naturally, you had the foundational Superman, Batman and Wonder Woman, but there were also strips that starred offbeat characters like Metamorpho, Deadman and Kamandi. 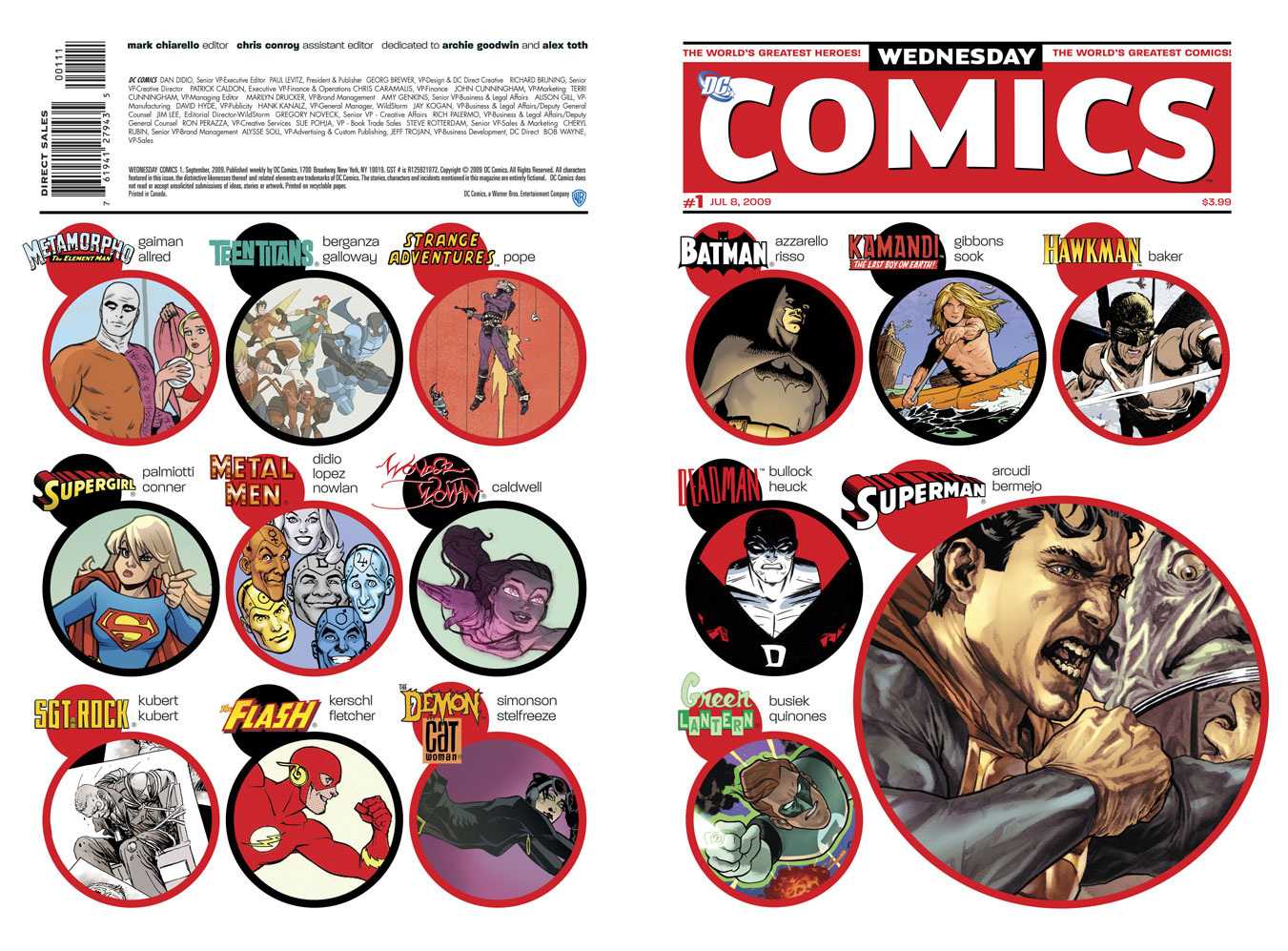 For me, Kamandi, written by Dave Gibbons with art by Ryan Sook, was easily the best — a gorgeous tribute not only to creator Jack Kirby but to the adventure strips of Hal Foster and Alex Raymond. It was glorious — a word I don’t choose lightly.

Wednesday Comics’ version of the Last Boy on Earth comes to mind because TwoMorrows’ Back Issue #131 is dedicated to Kirby’s post-Fourth World legacy at DC — an in-depth look at characters such as the Demon, OMAC and, of course, Kamandi — and how they’ve thrived in the hands of those who followed. (By the way 13th Dimension columnist and comics writer Fred Van Lente just gave us JACK KIRBY AT DC: THE TOP 13 POST-FOURTH WORLD STORIES – RANKED, as an August birthday tribute to the King. Click here to check it out. It’s excellent.)

Dig the cover and table of contents: 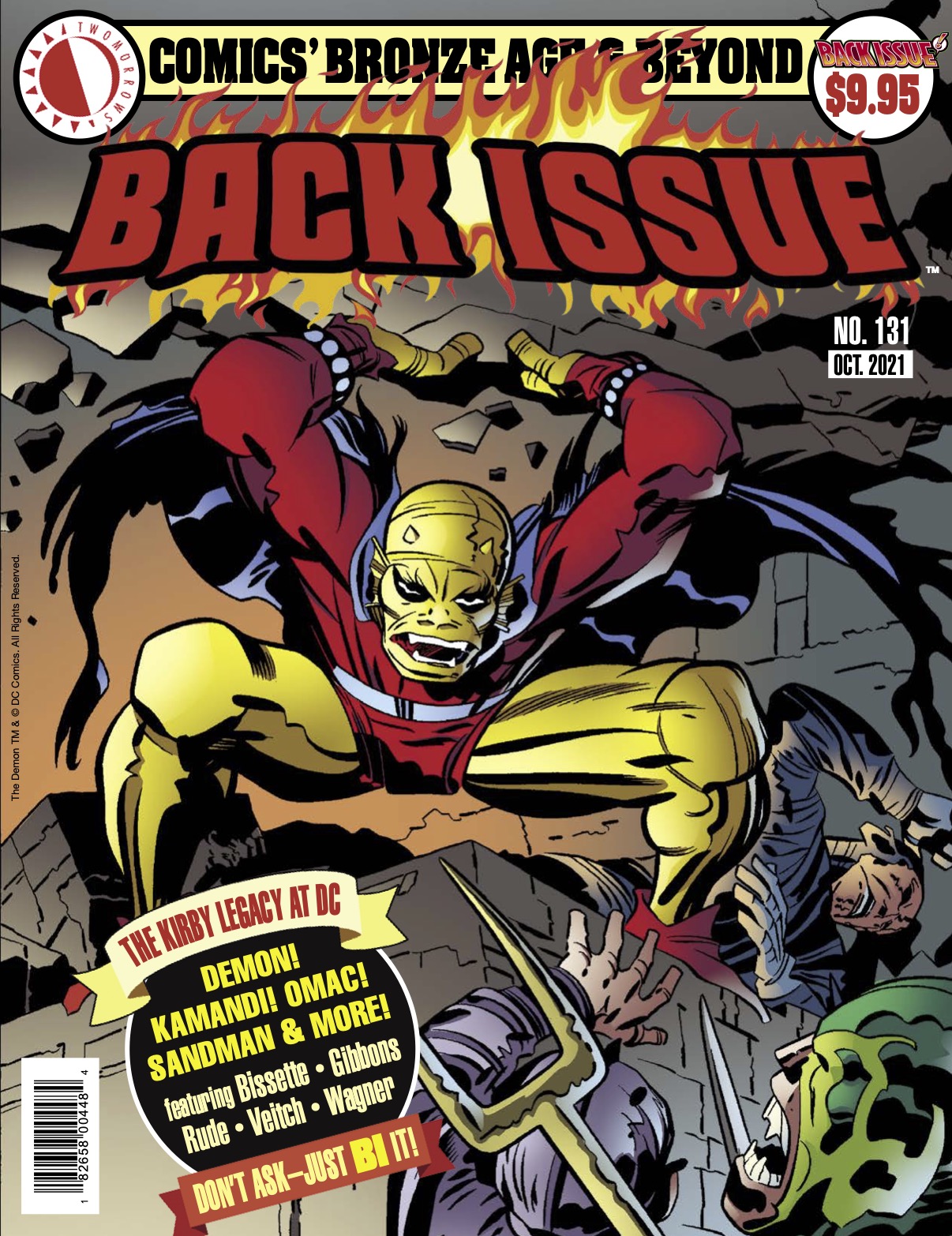 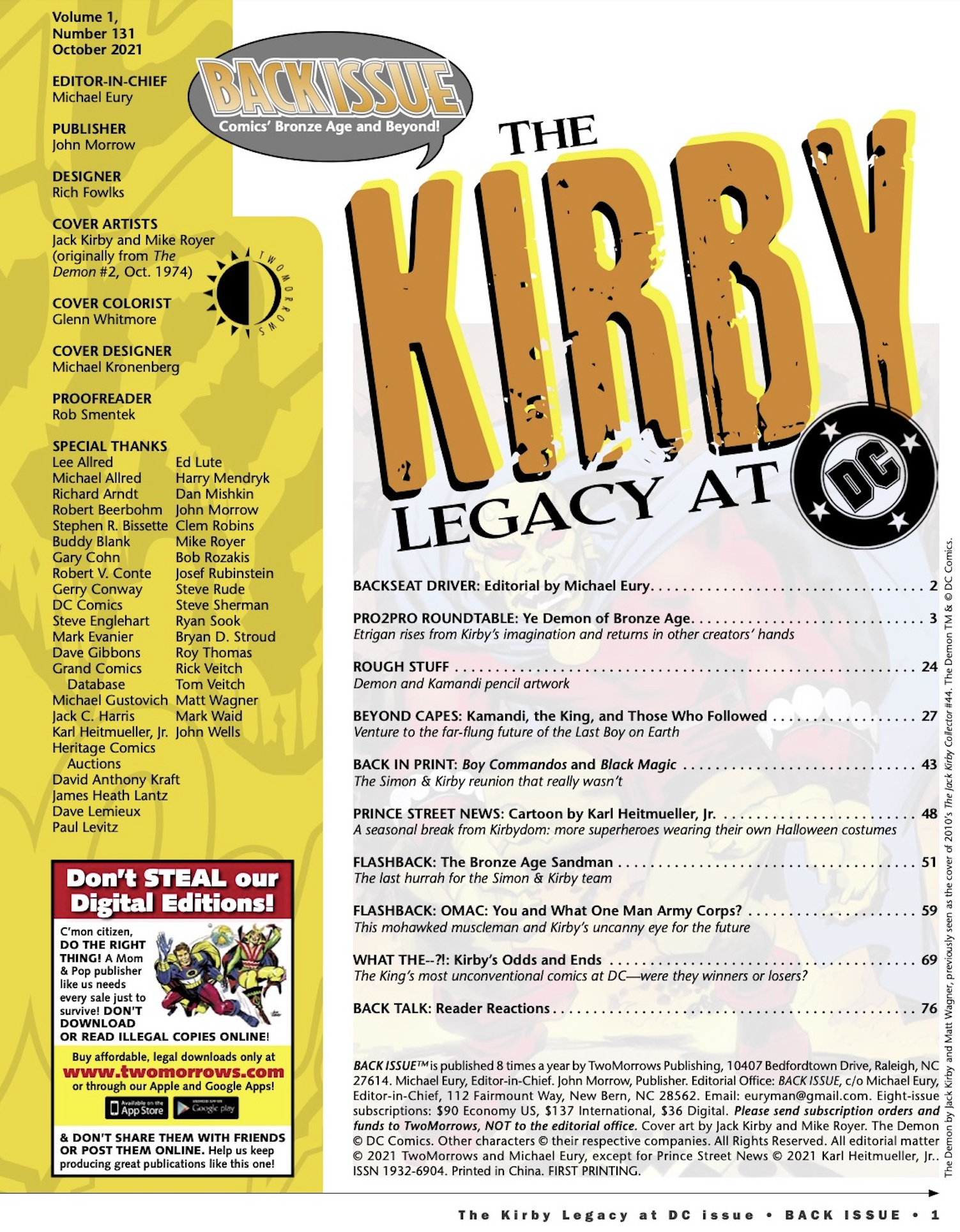 Anyway, the Kamandi piece — by Bryan D. Stroud — just happens to have a section on the Wednesday Comics strip and how it came together under Gibbons and Sook — and we bring it to you as this issue’s 13th Dimension EXCLUSIVE EXCERPT.

Check this out — and if you’ve never read Wednesday Comics, go track it down. You’ll be glad you did. 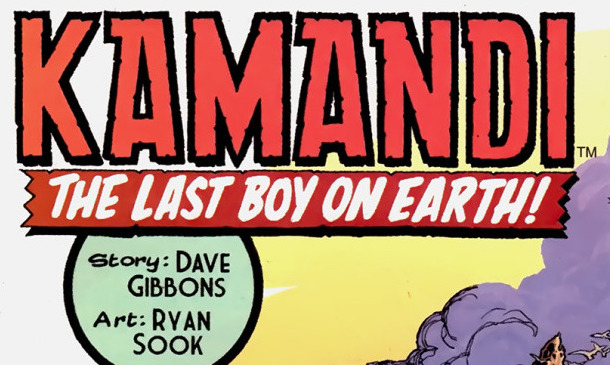 The next Kamandi resurrection occurred in the pages of the weekly series Wednesday Comics, a 2009 miniseries published in a newspaper format and featuring a variety of DC characters whose adventures comprised a single page, serialized each issue. In Wednesday Comics, Kamandi was expertly handled by writer Dave Gibbons and artist Ryan Sook.

Dave Gibbons’ involvement came about courtesy of Mark Chiarello, editor for the series.

“He phoned me up about this Wednesday Comics, which I thought was a great idea,” Gibbons discloses. “I’ve got childhood memories of reading those big, tabloid American comics and he asked me if I would like to do Kamandi. I sort of liked Kamandi. I’d always been a big fan of Jack Kirby. I thought Kamandi was rather a bold thing to do. You could see its roots in Planet of the Apes, but also in stuff that Kirby had done in the ’50s. Harvey Comics, like Alarming Tales, where, in fact, there was a story that featured anthropomorphic animals. Kirby was always really good at synthesizing influences and making something totally novel from them.” 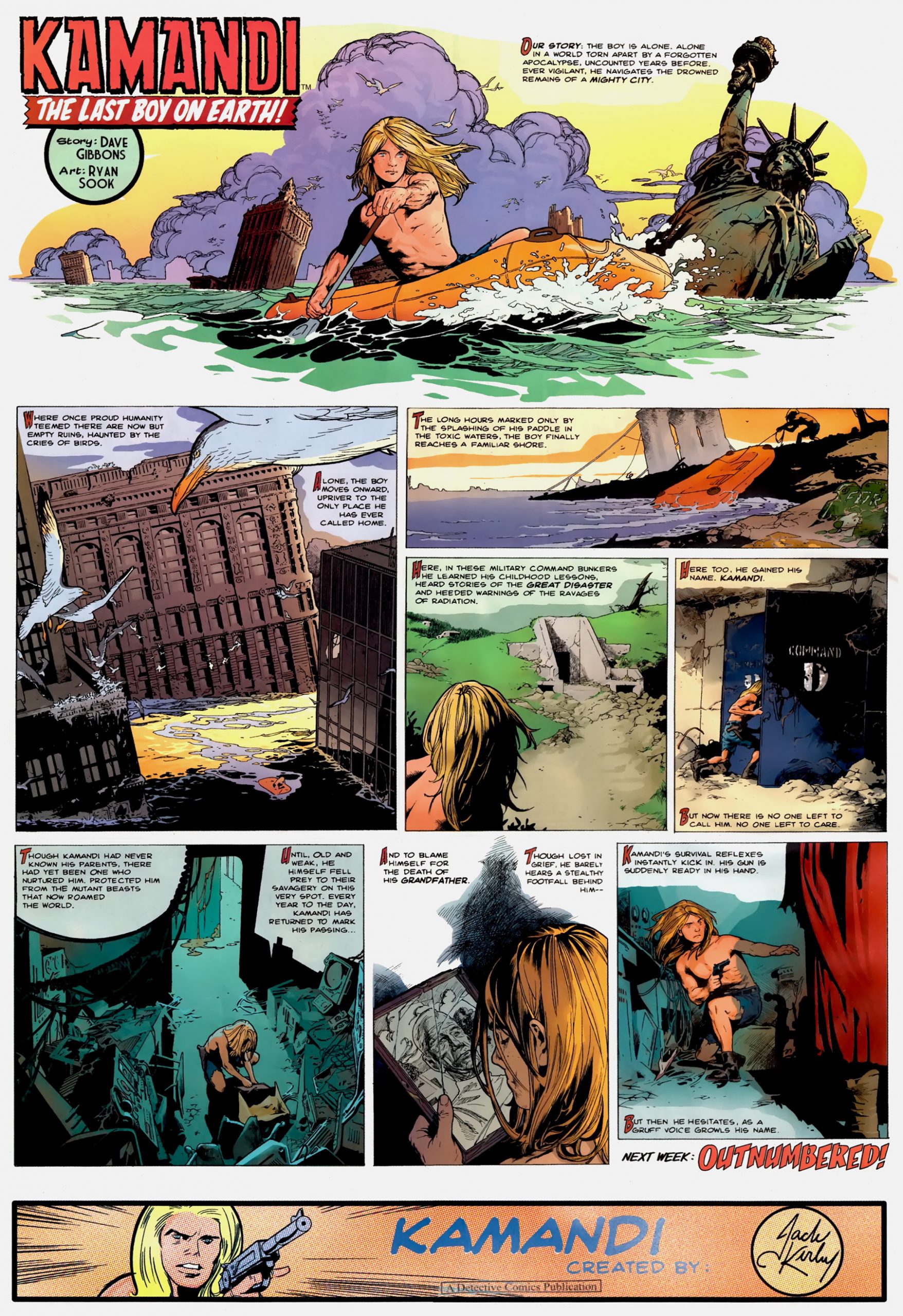 Ryan Sook was also on Mark Chiarello’s rolodex, and relays his recruitment to the project: “He called one afternoon and asked specifically if I’d be interested in drawing the Kamandi story, with [writer] Dave Gibbons. I was thrilled at the offer and immediately accepted! I think I started working on Kamandi sketches that day!”

Gibbons’ story kept classic elements of Kamandi intact, with the boy wandering in solitude through his badly damaged world. He meets up with a swashbuckler-styled Tuftan the Tiger and fights off a group of evolved rats with his friend’s help. They also manage to reunite with Doctor Canus, who pilots a massive blimp. Further hearkening back to the original series, Kamandi rescues a girl named Orora from the ape forces, a character very much in the mold of Kirby’s Kamandi character Flower and her sister Spirit.

The 12 installments, at a page each, move swiftly while still packing a storytelling punch. Apes, tigers, and lions meet for a titanic fight on the very spot where the battle of Gettysburg took place. In the end, though, Kamandi still finds himself very much alone as the Last Boy on Earth, but with a glimmer of hope that perhaps there are others where Orora came from.

The format of Wednesday Comics presented interesting challenges to the creative team. Dave Gibbons remembers, “It had to be 12 episodes and it had to be done in a page, albeit a large page, but actually having worked in British comics, which have a similar page size and a similar episodic structure, that was something that seemed fairly natural to me.”

It wasn’t quite as simple a fit for Ryan Sook: “The size and layout of the project presented interesting challenges. The size of the paper I drew them on was actually taller than the drafting board I used at the time, and so I had to bring in a piece of plywood to set on top of my table just to have enough room to draw it. Also, by Part Four of the series, I think, I had used up just about any lead time for deadlines. So laying out, drawing, inking, coloring, and lettering the full page in a week was a real challenge for me.”

The creative team worked well together on the project. When asked about his own artistic background and expectations, Gibbons offers that Sook was easily up to the task: “I was absolutely thrilled with what Ryan did. He’s a wonderful illustrator, great storyteller, and he gave it exactly the feeling that I wanted, which was to look like a 1930s or 1940s Prince Valiant or Flash Gordon page. He very much gave it that vibe and he colored it as well and it had all the grandeur and mythic quality that I’d hoped for.” 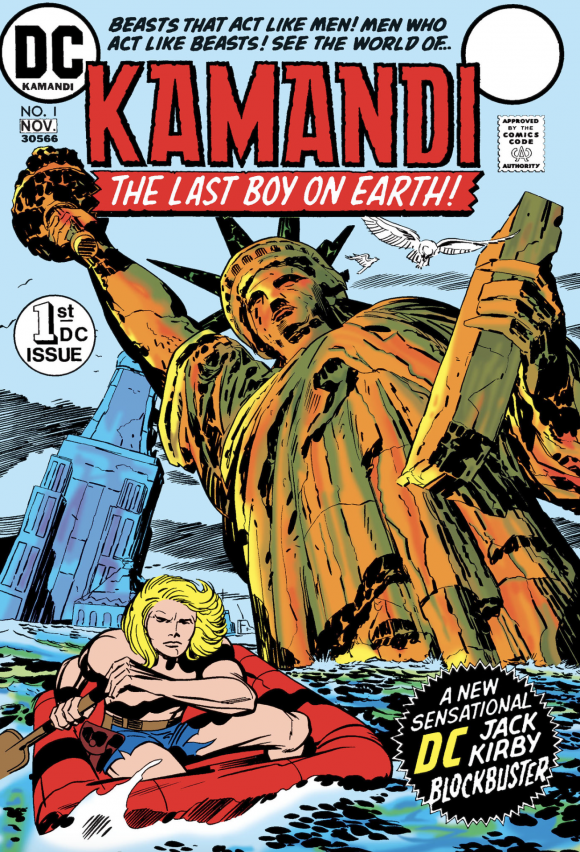 Sook was also happy with the partnership: “Dave is an amazing artist and writer. I imagine that as an artist, he is very adept at writing a script that allows an artist to really compose the pages in the best way. As I recall, his scripts were concise, clear, and allowed me to visualize the material with a lot of artistic liberty while still bringing across the story as clearly as possible. His scripts were a breeze to work from.”

Initially, another artist was being considered for the series: “Originally, Steve Rude was slated to draw Kamandi,” Gibbons reveals to Back Issue. “As you know, he’s a huge Jack Kirby fan, but for whatever reason it didn’t come about, but we did have a few early discussions and it was actually Steve who emphasized the essential loneliness of Kamandi, that he was the Last Boy on Earth. So, I suppose that pathos started to underline it for me and that’s why the payoff is that once again, after meeting another human, he was now back to being the Last Boy on Earth again, which I thought was a good note leave it on, so thanks to Steve for that.”

Steve Rude confirms his brief involvement with the series: “Dave Gibbons is indeed correct. I was vying for a New Gods strip in Wednesday Comics, but [DC executive] Dan DiDio couldn’t seem to make up his mind about things. Instead, I was offered a Kamandi strip as a replacement, but turned it down. The artist who ended up replacing me did a superlative job with it.” 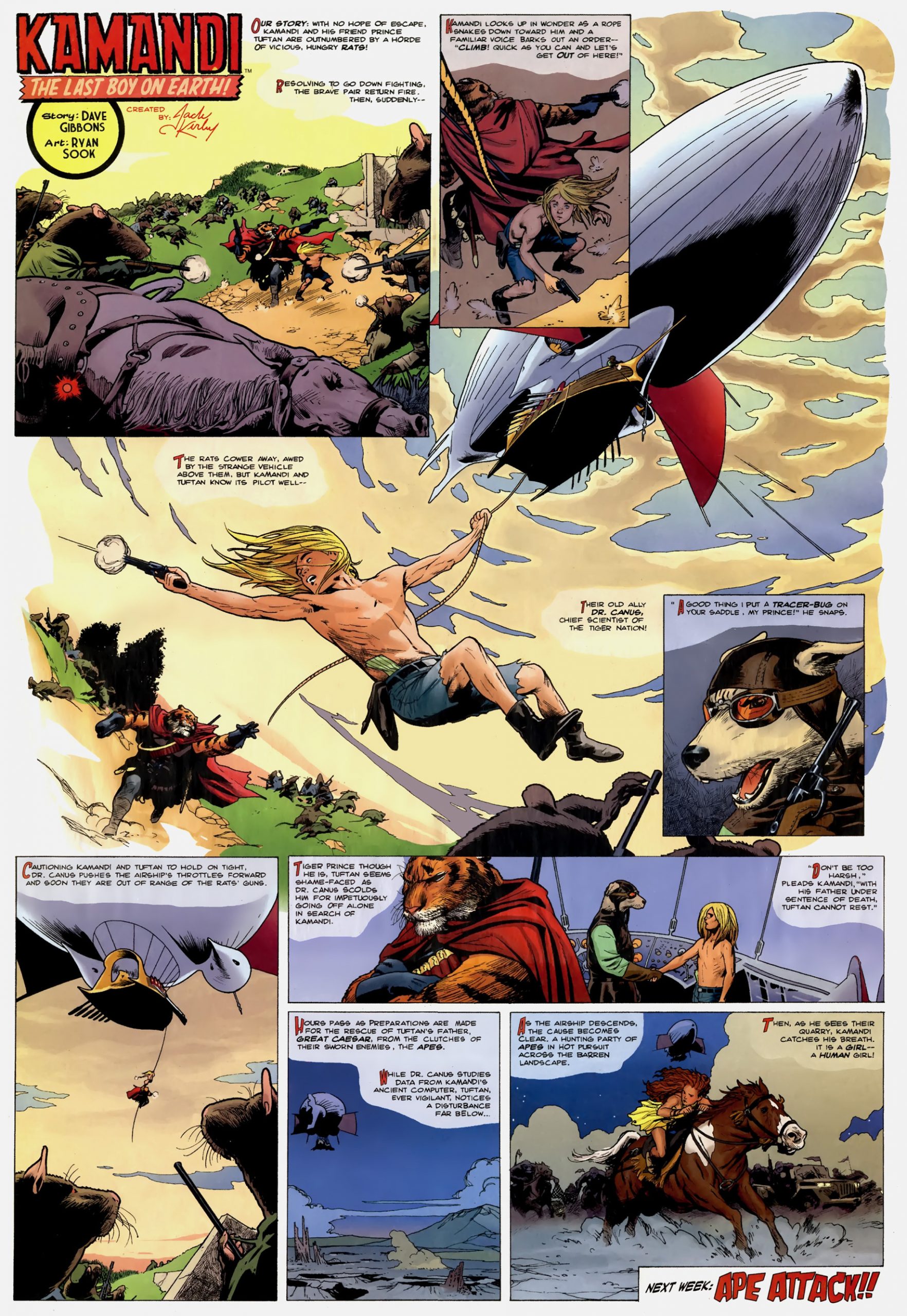 One unique treatment of Kamandi’s Wednesday Comics series was the exclusive use of captions. “That was a conscious decision,” Gibbons offers, “because that’s how the classics like Prince Valiant and Flash Gordon were done and it adds a different tone to it. It makes it more of a sense of having the story told to you rather than you witnessing the story. It gives it a certain classic feel, I think.”

From an artistic standpoint, Sook appreciated the captioning treatment: “It was a distinctly different approach to storytelling in comics, having no need for a lot of word balloons all over the page. Doing the lettering myself also allowed me to incorporate the captions directly onto the art and the composition of the pages, which is also a real benefit.” 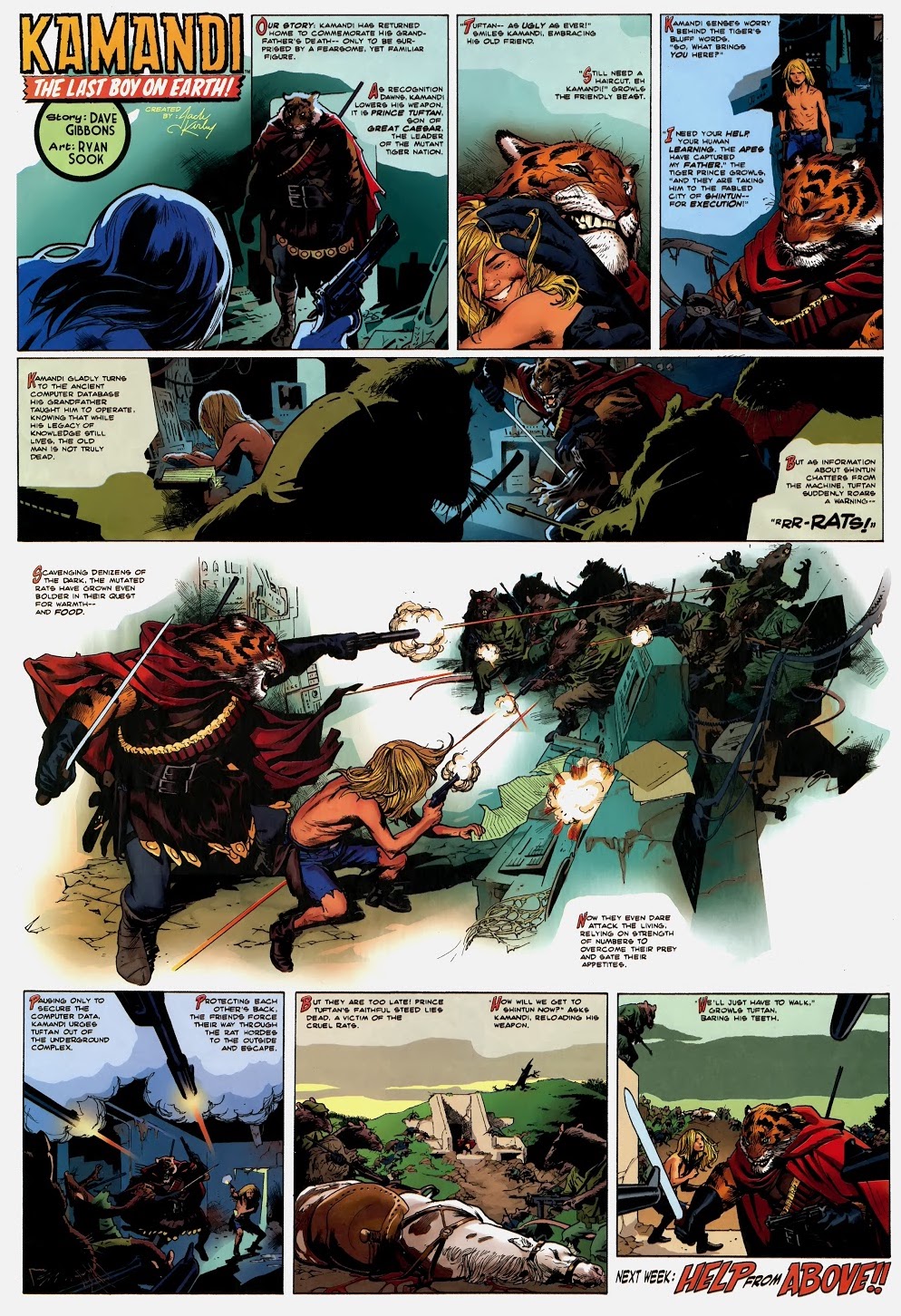 Gibbons’ opportunity to work with Jack Kirby’s creation is something he appreciates: “It was great and I think for a great many of us because he was so prolific and so creative. The number of ideas that the guy generated in his lifetime is absolutely astonishing. It’s that as much as his technical abilities to draw and tell stories that I think makes him truly the King.”

Sook is in full agreement: “Kirby’s characters and stories are still, decades later, so full of potential that most every artist that enjoys mainstream comics at all have a field day getting to dive into that world and draw out any of the numerous treasures still waiting to be unearthed. Myself included!”

Back Issue #131 is due Sept. 22. It will be available at comics shops and magazine sellers but you can also order it directly through TwoMorrows. (Click here.)