JULIE NEWMAR: The Day I Got the Call to Play CATWOMAN

Home » BATMAN'S HOT-LINE » JULIE NEWMAR: The Day I Got the Call to Play CATWOMAN 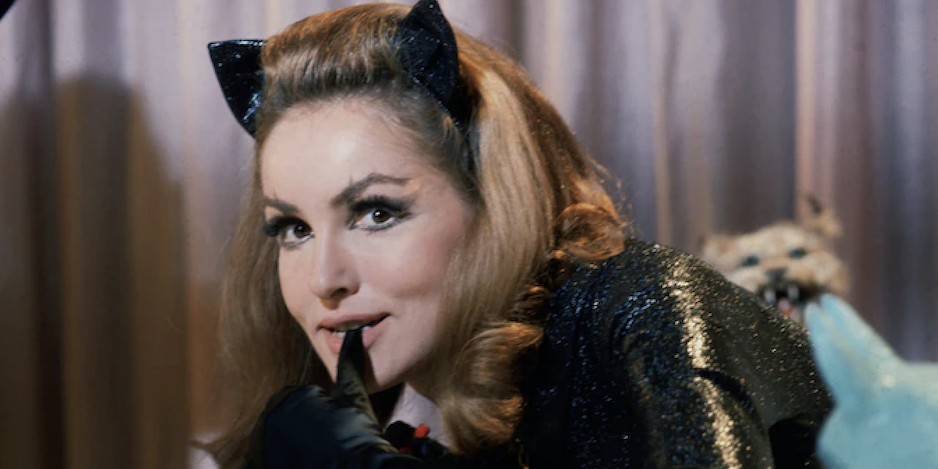 The great Julie Newmar, one of the wittiest and kindest people I’ve ever had the pleasure of interviewing, is the cover profile in the new RetroFan #21, due out June 29.

This time around, Mark Voger spoke to the Greatest Catwoman Ever – and we’re running a piece of that article as our EXCLUSIVE EXCERPT, below. 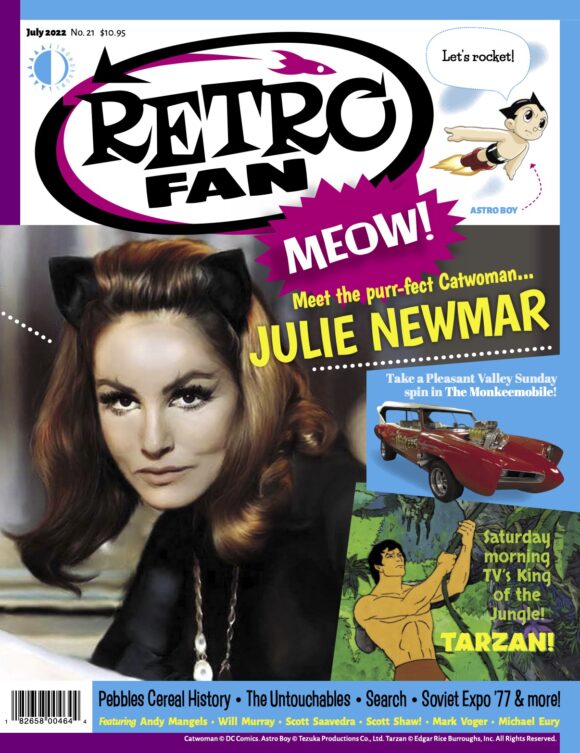 That said, the ish has a great overall line-up as usual. Just check out the table of contents: 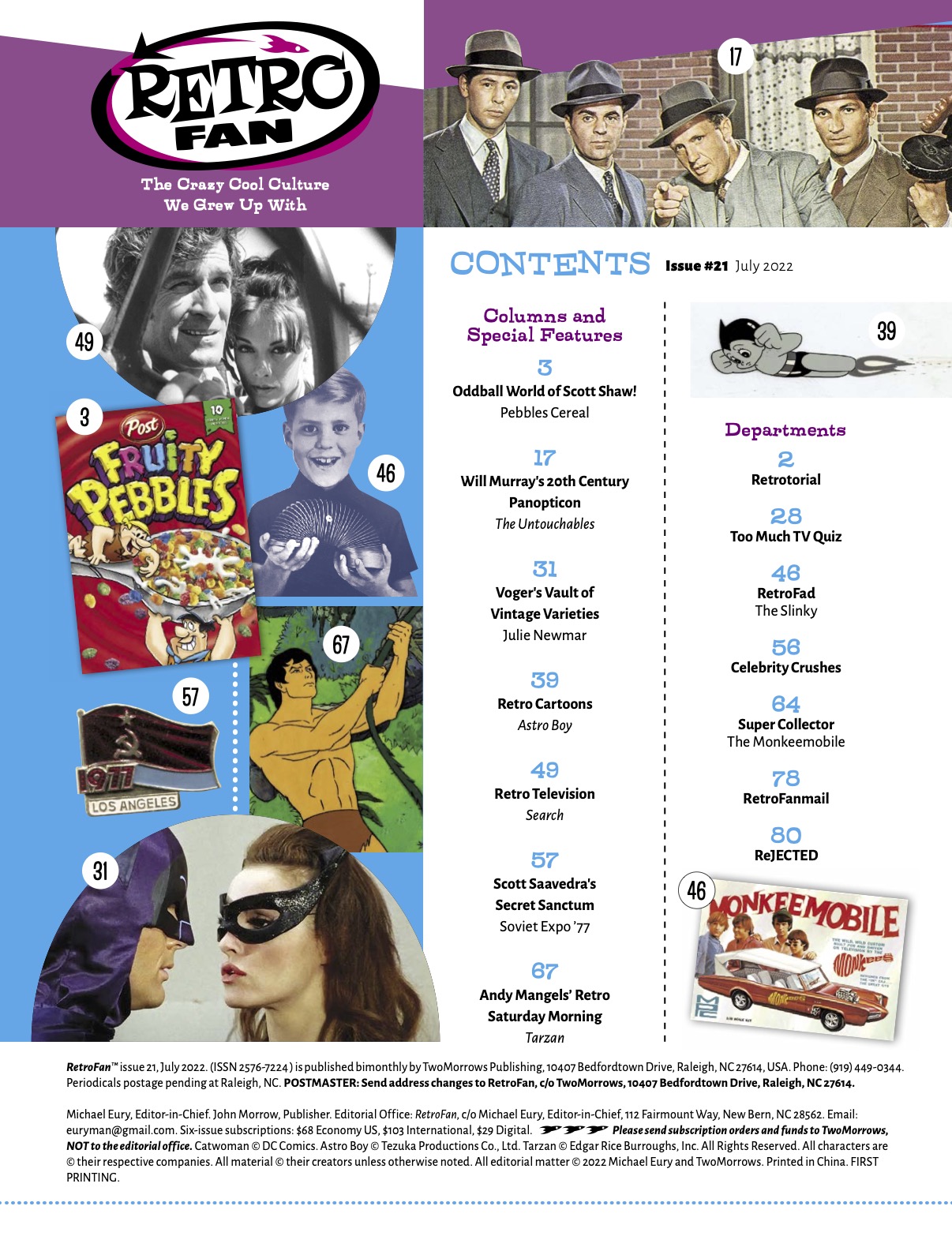 RetroFan #21 will be available at comics shops and magazine sellers but you can also order it directly from publisher TwoMorrows. (Click here.)

Now, dig this EXCLUSIVE EXCERPT in which Julie Newmar discusses the day she got the call to play the Feline Fatale on Batman ’66: 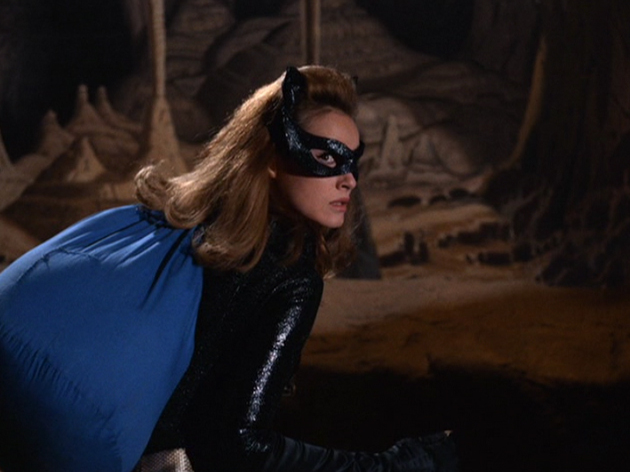 Julie Newmar was living in New York when the Batman people first contacted her. She might have turned down the Catwoman, if not for the urging of some visitors who were familiar with the hit comedy, and recognized its significance.

Recalled the actress: “One Saturday afternoon, I was sitting in my penthouse apartment with my brother, who’d just come down from Harvard where he was getting his Ph.D. in psychology or whatever degree he was getting; he has about seven. About five of his friends were there.”

A phone call came in and asked the question: “Could I? Would I? Catwoman? Batman?” I said, ‘Catman? Batman? What’s that?’ And as I said ‘Batman,’ my brother leapt off the sofa and said, ‘Oh! It’s our favorite show at Harvard! You’ve got to go do it! Leave tomorrow!’ So I was on a plane Sunday and in wardrobe Monday and on the set Tuesday.”

Newmar said she “had a hand” in designing her figure-hugging Catwoman costume. 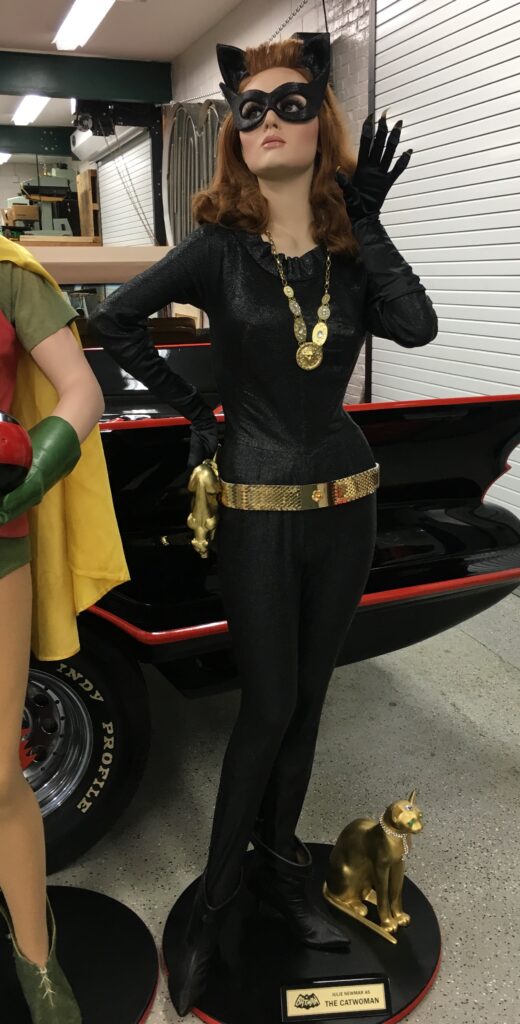 An original Catwoman costume. The jumpsuit and belt were used on screen. The rest are reproductions.

She recalled: “It was me. See, I have the secret of making zingy clothes, form-fitting clothes. It’s almost as if licorice was poured over the body, and then they zip you into it, see. It’s very easy to wear. Its secret is in the seams. The whole secret is in the seams, and I’m the only one who knows how to do it. Even Thierry Mugler, the French designer, fell in love with the Catwoman.”

Then there was Newmar’s interplay with Adam West.

“If it hadn’t been for his brilliant dialogue—all I had to do was just physicalize the words. When you have gorgeous dialogue like that, all you have to do is get in the right costume and show up. It’s true. There’s a lot of details in that, so that the end result is that everything looks easy. I owe my career to Stanley Ralph Ross.”

RetroFan #21 will be available at comics shops and magazine sellers but you can also order it directly from publisher TwoMorrows. (Click here.)