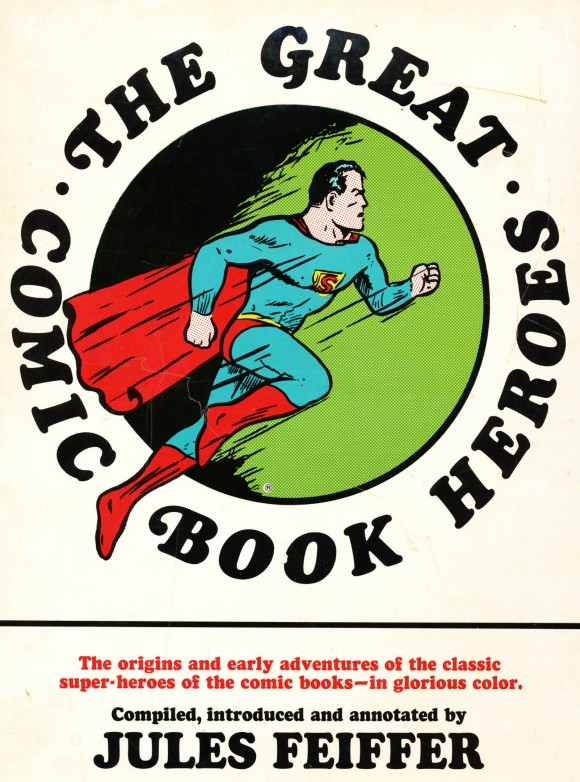 My first exposure to Jules Feiffer was through his book The Great Comic Book Heroes, which I borrowed from the Colonia Public Library about six or seven times when I was around seven or eight years old. The book exposed me to the early versions of characters I’d become very fond of.  Ten years later, I discovered Feiffer’s own comics in the Village Voice, which won him a Pulitzer prize in 1986. I remember the punch in the gut I felt in 1997 when I read that Jules Feiffer had been let go from the Voice. 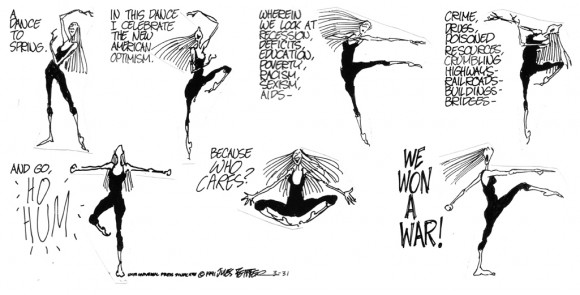 Feiffer strip from the Village Voice

Jules Feiffer began his career as an assistant to Will Eisner sometime  after World War II, and soon became a writer for the The Spirit comic that appeared in the Sunday newspapers all across America. He’s written screenplays for the films Carnal Knowledge and  Robert Altman’s Popeye. Feiffer has won an Academy Award for his animated short Munro, The Pulitzer Prize for political cartoons, The Achievement Award from the Writers Guild of America and National Cartoonists Society, the Obie and Out Circle awards for his plays, and many other awards.

I last ran into Jules Feiffer at SPX 2014, where I found myself alone with him in a hotel elevator after a long day. I thanked him for The Great Comic Book Heroes. I didn’t have to tell him it changed my life — after all, it was obvious; we were at a comics expo.

And that Neil Gaiman guy — he has a pretty impressive resumé, too.

If you’re anywhere near NYC on May 14th, go see Jules Feiffer in Conversation with Neil Gaiman. Tickets can be ordered here.