The Joker 80th Anniversary 100-Page Super Spectacular #1 is due out June 9 or 10 (depending on your shop), and one of the angles DC has been pushing is that the celebratory one-shot features the origin of Punchline — the Clown Prince of Crime’s new gal pal. 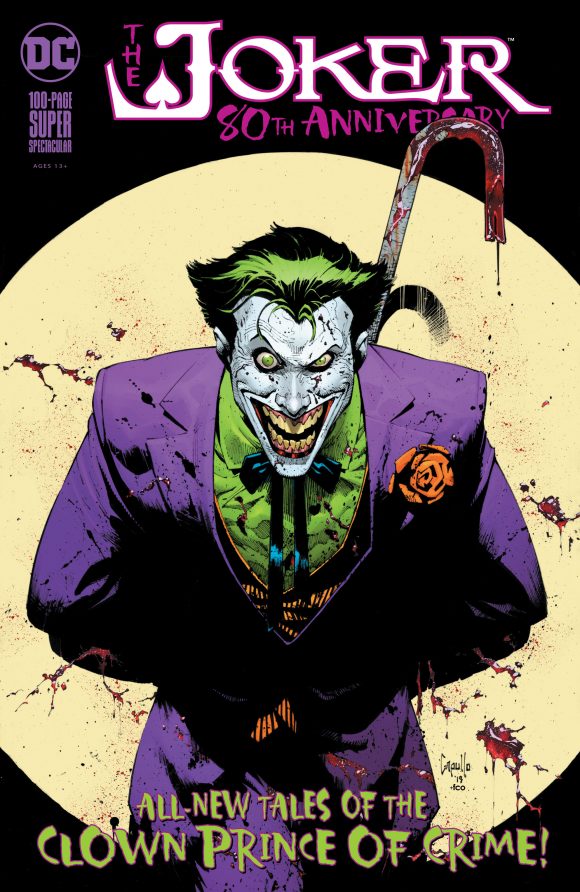 Punchline, if you haven’t been reading the headlines, is something of an enigma. She’s barely appeared in any comics and yet she’s been hyped as the Next Big Thing, with speculators snapping up her first appearances to a mystifying degree. We don’t know if she’ll become the next Harley Quinn — or the next, oh, say, Magpie — yet a lot of folks are spending a lot of cash betting on the former. 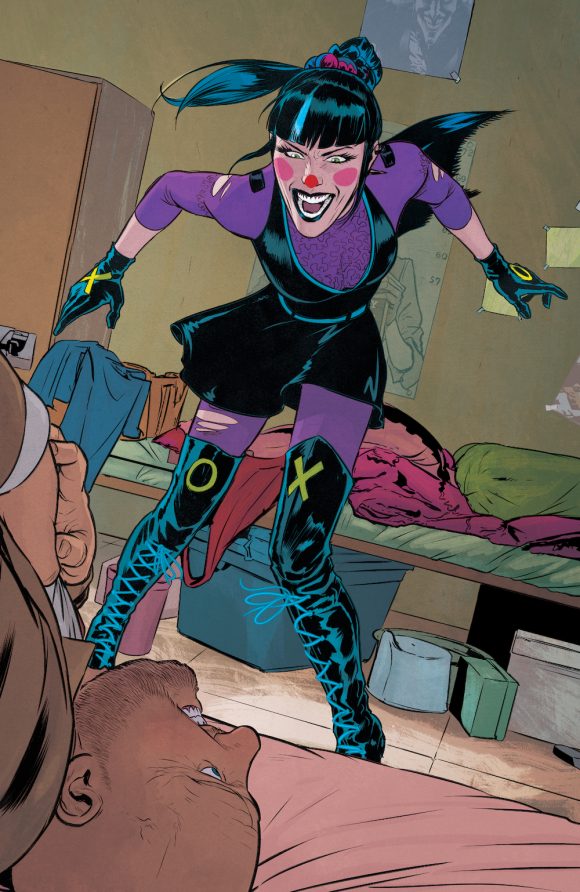 Of course between Harley and Punchline, I can’t help but remember the little guy who started it all — the Joker’s first costumed henchman: Gaggy the dwarf.

Gaggy first appeared in 1966’s Batman #186 — The Joker’s Original Robberies! by John Broome, Sheldon Moldoff and Joe Giella — near the apex of the Adam West TV show’s influence on the comics. Camp was the rage and there’s no question Gaggy would have made himself right at home in William Dozier’s Gotham City. 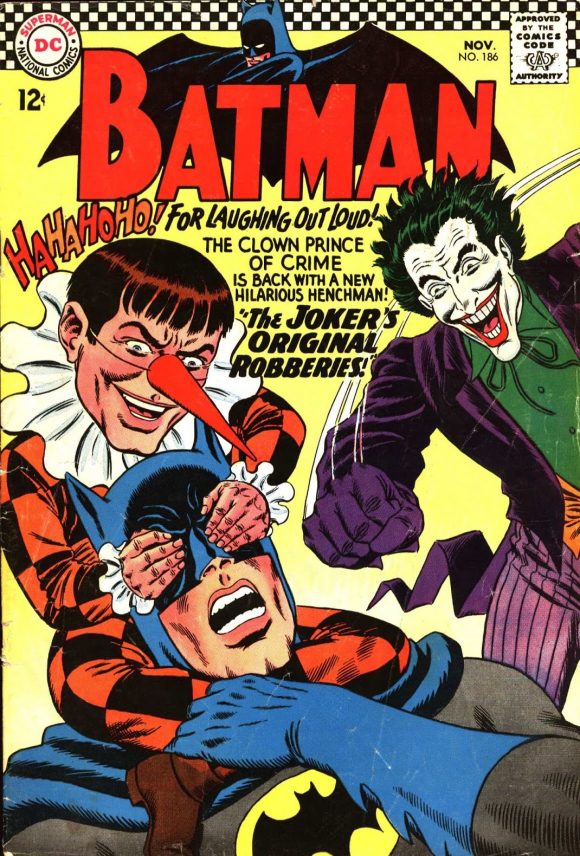 The little dude had potential. Basically his shtick was to act as the Joker’s court jester and make the Crime Clown laugh so hard that he’d become inspired to plan his next caper. Gaggy also sometimes wore a long fake nose, had an inexplicable ability to break glass by shrieking and was especially interested in kicking Robin’s ass. 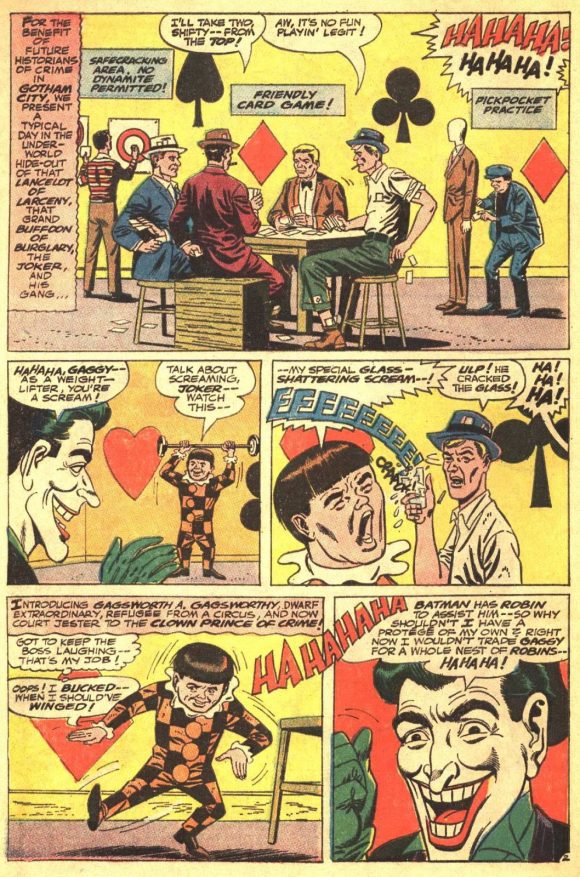 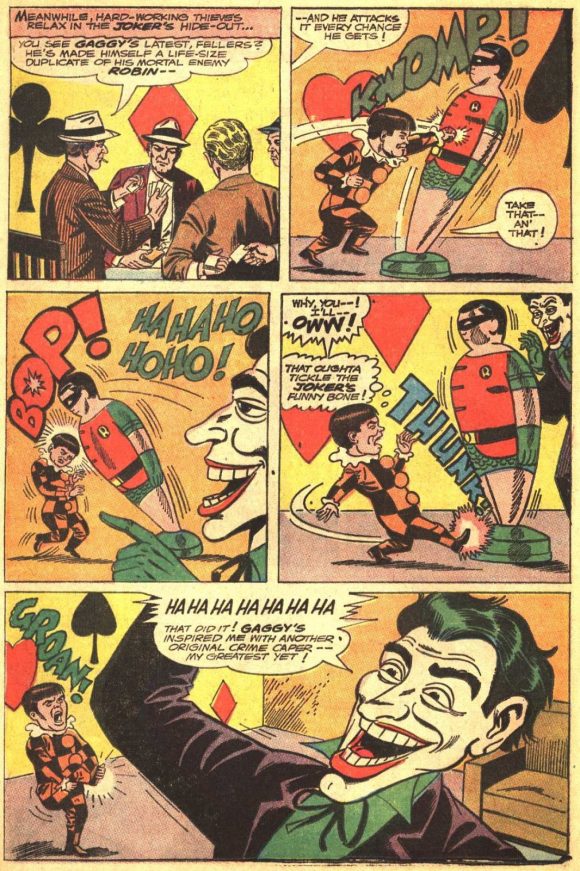 Thing is, Gaggy’s antics really didn’t inspire much: The best the Joker came up with was a series of robberies targeting collectibles, like the first electric typewriter. (Really.) And after a couple predictable scrapes, the Dynamic Duo dispensed with the Diabolical Duo (I just made that up) within a mere 13 and 2/3 pages. 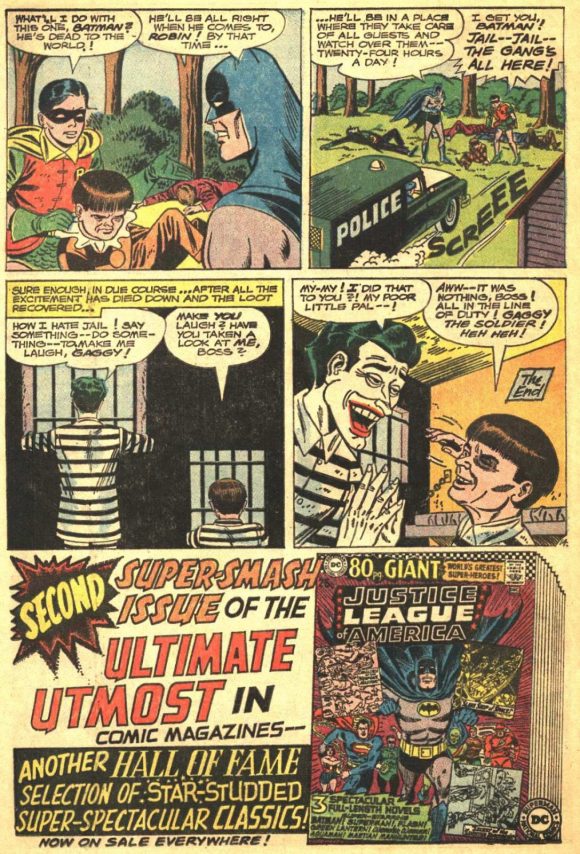 And then that was it. Gaggy hasn’t really seen again other than a couple of appearances here and there over the last 54 years. Which is just as well, I suppose, because if he were a regular these days his specialty probably wouldn’t be making stupid jokes, it’d be skinning hobos and wearing their flesh. Or something like that.

In any event, when you pick up your Joker 100-Pager this week, pause for a moment, raise a glass and toast Gaggy — the great henchman who might have been.