Last week saw the debut of JC De La Torre and Ray Dillon’s Star Mage from IDW. We caught up with JC for a MIGHTY Q&A about his influences, the Kickstarter process and merging a classic war-in-space tale with magic to give us an identifiable teenage hero! 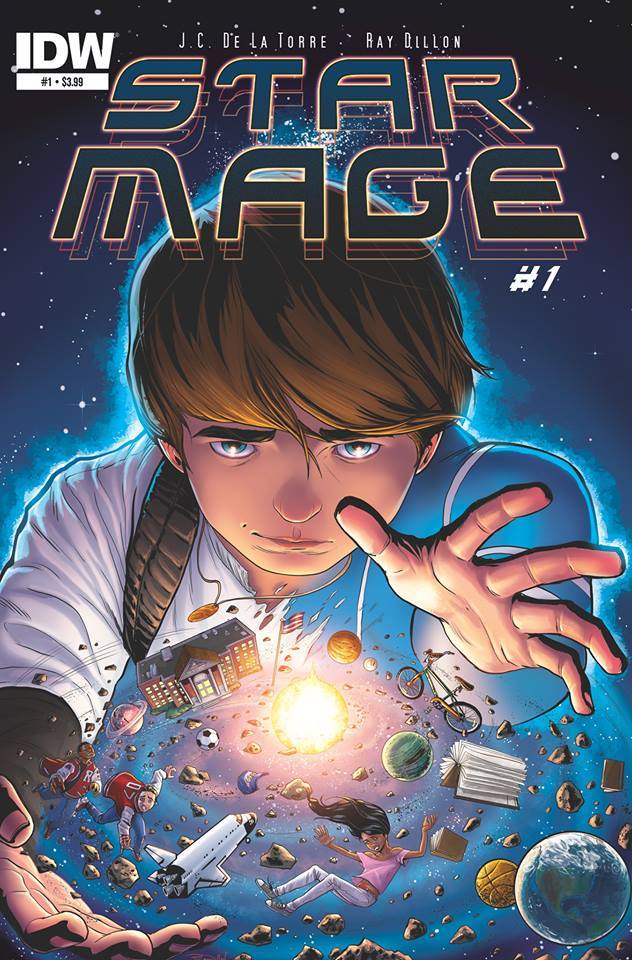 Clay N. Ferno: Thanks for joining us, JC! Care to tell us how you got from Kickstarter to IDW with Star Mage? It seems like the response so far is spectacular!

JC De La Torre: Thanks so much for having me. It was such an interesting process to get to where we are now. The story of Star Mage actually started out as a novella that I was dissatisfied with. It just didn’t feel like it was coming together as I hoped. I happened to be reading an IDW Doctor Who comic and that dim light bulb of mine had a momentary flicker and I realized that Darien’s story belonged in a visual medium — what better place than with comics?

I started doing research and whatnot. I knew I wanted high quality artwork and I can barely manage stick figures — so I needed to hire an artist. I went through several potentials before realizing that if I truly want the best art, I needed to pay for a pro. I found Ray Dillon and he was exactly what I was looking for. I paid for the first issue out of my own pocket but to continue the series we were going to need some help, so we turned to Kickstarter. If our Kickstarter failed, Star Mage would have been DOA. It was thanks to those supporters, my defenders of the realm as I like to call them, we kept the lights on and allowed us to continue to develop the series.

IDW knew of the project thanks to Ray, who had previously done work with them and got some of the artwork of Issue #1 in front of Chris Ryall of IDW. There were a ton of starts and stops in the first year and a half developing Issue #1. There were days where it truly seemed like we’d never finish — but IDW stood by us through and through. When we finished Issue #1 and realized due to his demanding schedule Ray wouldn’t be able to finish the series, they trusted me to find another artist of the same caliber. Franco Cespedes took over and once we got our first three issues in the can, the IDW machine began churning.

Response to Issue #1 has been overwhelming. We’re very close to a sell-out of our initial run and we just had a signing at Heroes’ Haven Comics in Tampa where the line was out the door, the store sold out of their copies and we actually had to dip into our convention stock to be able to support the masses. The reviews have been mostly positive so it appears to really be well liked. 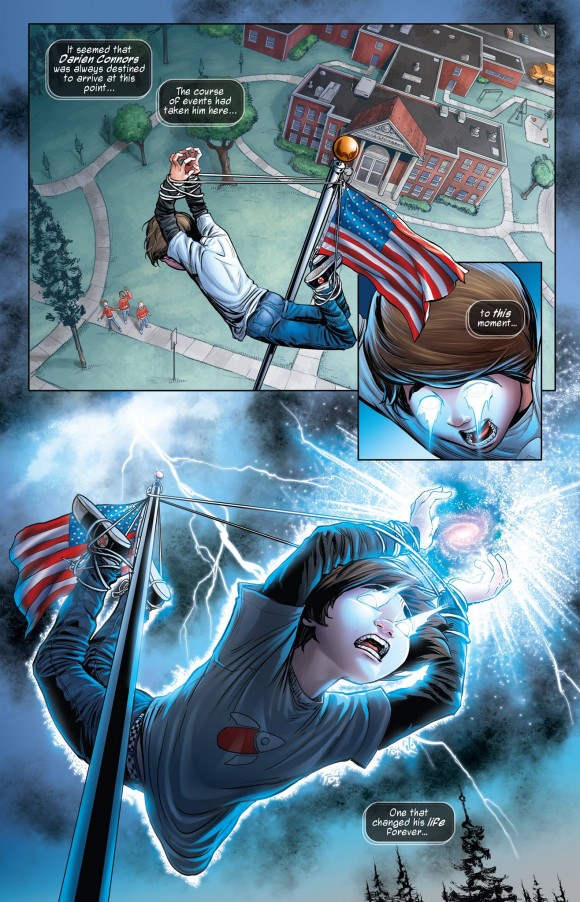 You get to blend teenage fantasy of space exploration, mystical worlds and magic into Star Mage. How long has the idea been percolating? Darien is 14 and has what can best be described as Parker Problems with bullies at school!

I really wanted to explore a fusion magic and science fiction. Star Wars did it some what to a lesser extent with the Force, but that was more of a telekinetic power (not that I have anything against the Force or Star Wars – I love them both). I wanted true magic and spells with a science-fiction backdrop. I thought it would be a fun universe to play in and it’s been that and more.

I grew up a huge Spider-Man fan so yes, there are definitely some Parker Problem elements in Darien’s origin story — but to be quite honest — those were just a catalyst to get him from point A to point B. Both Tristan and Gemma have very minor roles after Issue #1. 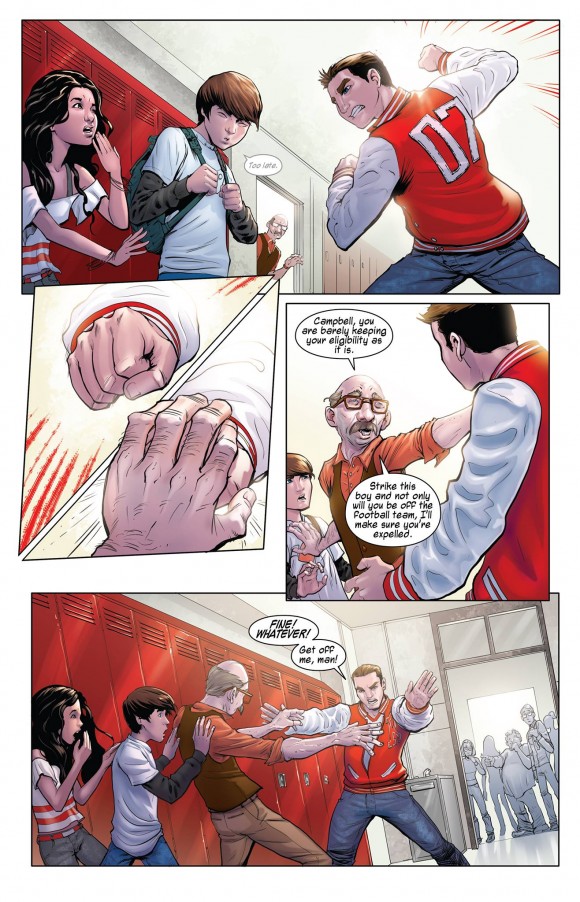 When I was a kid, I wanted to be an astronaut, my room looked similar to Darien’s. Have you always been looking to the stars as well?

Yes, I have always had a fascination with the cosmos. I would look at the stars and dream of traveling among them to strange, distant worlds. I wondered how different life was on other planets and would they be friendly? That’s why Star Trek and Star Wars, basically anything with “Star” in it, was huge for me. Those types of shows took me out there.

I think I knew early on my path wouldn’t be to NASA but if I could go there in my mind, that’s cool too. By the way, everyone should watch Seth McFarlane and Neil Degrasse Tyson’s reboot of Cosmos. It is just as good as the old Carl Sagan shows I grew up on. Fabulously done!

As a writer, is this your first foray into comic books?

Yes, indeed it is. I’ve loved comics all my life by I’ve stayed mostly in prose. I had two well-received novels, a short-story collection and a few eBook novellas to my credit. I’ve also done some audio theater with Dr. Geek’s Laboratory of Applied Geekdom and podcasting with my show, Transmissions From Atlantis. I’m also a sports geek, so I’ve written for Bucsnation — a site dedicated to the Tampa Bay Buccaneers, NFL.com’s Blog Blitz, Bleacher Report and a few others.

Comics, though, has always been a fascination of mine and I absolutely loved writing Star Mage. It’s really been a long time since that flame of excitement has ignited within my imagination. It truly has felt I’ve been in the wrong medium for a long time. I want to continue to write for comics going forward. I may have some other non-comic projects coming around — I’m developing an audio drama called Continuum Force (kind of a Stargate meets Doctor Who) — but I do have a plan for Star Mage after this six-issue limited. I’m hopeful it does well enough that IDW wants to continue the series. I’m also working on a project that isn’t all ages called White Chapel with a co-writer, Martin Dunn. It’s an Anne Rice-styled vampire yarn told from the vamps’ point of view and includes Jack the Ripper as a vampire (hence the name, White Chapel). I can guarantee you these vampires will not twinkle.

As our hero learns more of his powers in the coming issues, what challenging decisions is he going to face?

Oh there’s going to be a big decision for him. Is the empire that he is returning to good or evil? His brother Orasmas, leads the opposition — should he side with his family against the empire? Who is he … really? What happened to his father? Who is Arylos? There’s so many things we’re going to cover in these next five issues … it’s truly going to be fun to see everyone’s reactions. 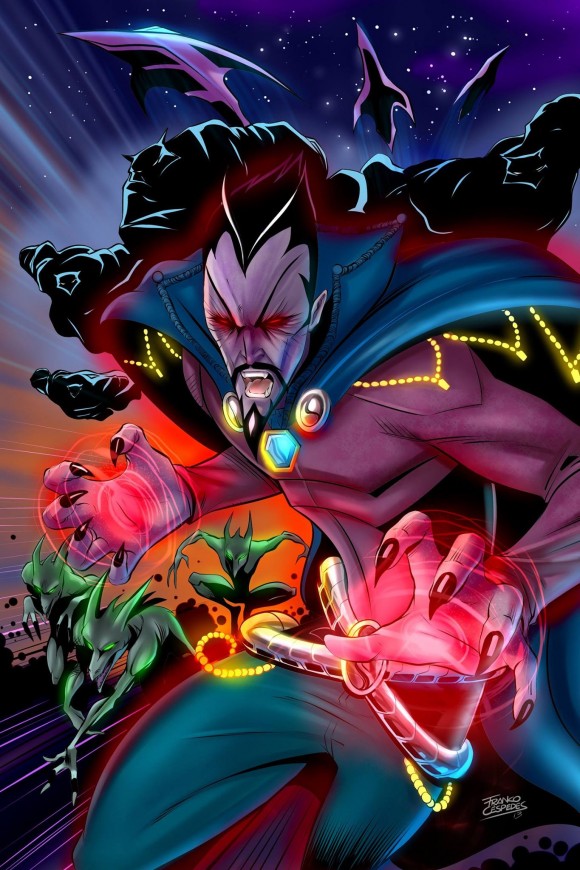 Story elements seem familiar yet fresh, from a Spider-Man and Dr. Strange influence, but also Green Lantern. What were your favorite comics when you were 14?

I mentioned a little earlier that Spider-Man was definitely my favorite super-hero comic. I also read Ghost Rider and X-Men, but it was always Spidey for me. That and horror comics, Tales From the Crypt-type stuff. It’s strange because as I grew older, I left superhero comics behind and moved to more darker stuff like 30 Days of Night, Spawn, O’Barr’s The Crow and Frank Miller’s stuff. Lately though, I’ve just been reading the licensed comics like Buffy, Doctor Who and Star Trek … and of course, The Walking Dead. Who doesn’t read that?

I can’t resist asking, Whovian! Who is your favorite Doctor and Companion pairing? And how excited are you for Capaldi?

Oh wow … that’s a tough one. So the wife is going to kill me because she loves Ten and Rose, but I’m old school. I’m going to go with Fourth Doctor and Sarah Jane Smith. Sarah Jane for me was one of the best of the classic Who companions and really one of the first who wasn’t typecast as the ditsy assistant. She lasted, too. The companion Liz Shaw was a little like that, but they got rid of her pretty quickly.

As for Peter, I am absolutely thrilled with his selection. I’ve seen a ton of his work in “The Thick of It” and some of his other shows. I think he’s a fabulous actor who is going to bring weight and an energy to the role. It’s also time we didn’t have a “young pretty boy” Doctor. Some of the best Doctors, Pertwee comes to mind, were older gents. BTW, Titan, if you need another comics writer for Doctor Who …

Thank you, sir … For the fans, what is the best way to follow you and the comic on social media?

Thanks again for the invitation to introduce your audience to Star Mage. They can follow me on Twitter @JCDeLaTorre and the comic @StarMageComic. We also have a Star Mage page on Facebook. Probably the best place is the website, starmagecomic.com — we often give you little previews of artwork for future issues.