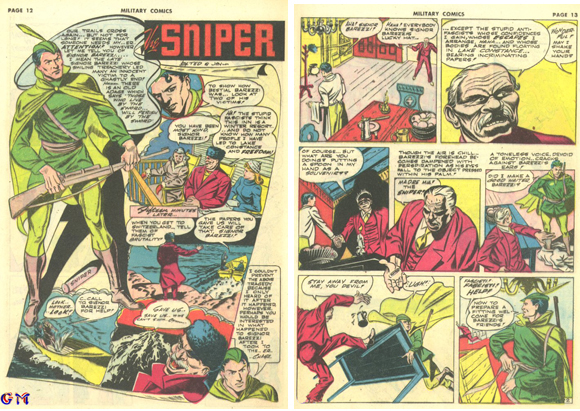 The forgotten Quality Comics hero THE SNIPER stands as a Golden Age feather in the cap of Jacob “Jay” Landau, in the decades before he became a noted educator, illustrator and fine art printmaker. A retrospective of Landau’s war-themed work is on display at NJ’s Monmouth University, April 10 through 24.

It rushes at you like a chaos of riderless horses. Lunges for your gut with fixed bayonet.  Flails a desperately groping hand that causes you to shrink back a step, even as you wonder if there’s anything you can do to ease the epic anguish of the twisted figures before you.

When encountered for the first time, the lithographs, woodcuts and drawings of the late artist Jacob Landau can be a jarring thing to behold — a stark and elegant/ugly plane of Holocaust tableaux; visions of Dante’s circles of Hell and the insomniac fables of E.T.A. Hoffmann. Scenes of displacement and despair that nonetheless pulse with the faint heartbeat of a stoic humanism — turning proud General Lee to a somber shadow, and Mark Twain to Edgar Allan Poe.

The artist’s passionately held, lifelong anti-war beliefs course through A Judgment of War: Selected Works by Jacob Landau, a retrospective exhibit of works hosted in the seminar room of the Monmouth University library, and opening with a 4:30 pm reception on Thursday, April 10. Curated by MU’s Scott Knauer and Susan Douglass, the installation covers several of the works that Landau (1917-2001), a longtime resident of the Monmouth County, NJ artist community in Roosevelt, is noted for among fine art experts. It also folds in some previously little-explored corners of the artist’s early career — from his stint as art director and editor of wartime military magazines, to the Hitler-punching exploits of America’s most super of soldiers, Captain America.

Young Landau’s involvement, in the creator-run shop overseen by Joe Simon and Jack Kirby for the first ten issues of Cap’s title, is among the topics that will be discussed (along with The Sniper, a rifle-toting Robin Hood appearing in Military Comics, the Quality title that introduced Blackhawk to the world) by Steven Brower, the award winning designer, author and former creative director of PRINT magazine. Brower — who wrote this vanguard study of Landau’s comix connection, and whose other writings on the topic have included this illuminating piece on Kirby’s photocollage background experiments, and this fond farewell interview with the great Joe Kubert — comes to Monmouth’s West Long Branch, NJ campus on April 17 for a first-ever talk about Jacob Landau’s mystery-shrouded career as a superhero comic book artist.

13th Dimension spoke to Steven Brower on Landau’s brief but fondly recalled romance with the comics business, and the ways in which sequential storytelling continued to impact the artist’s later work (and perhaps, vice versa). 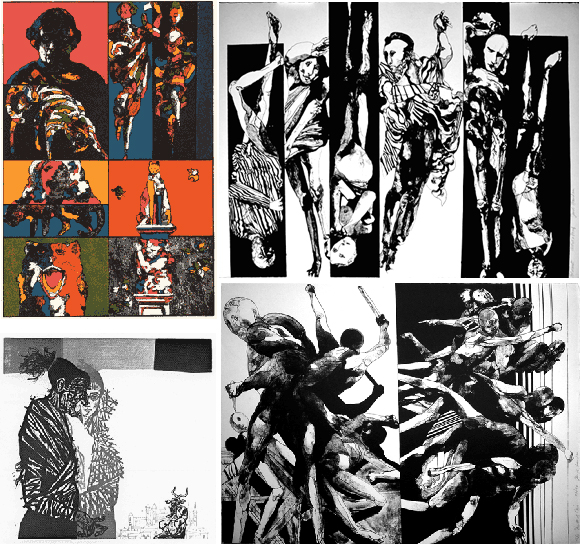 The 1960s drawings and woodcuts of Jacob Landau…including entries from his Holocaust series (right) and illustrated Tales of E.T.A. Hoffman (top left)…show a comics-trained artist whose storytelling skills were evolving concurrent with the most boundary-busting creators in comicdom.

13th DIMENSION: Jacob Landau is an artist whose work just blew me away the first time I encountered it…and even then it was some time before I found out, thanks to your writings, that he had this background in comic books. I’m especially interested in The Sniper, a Quality Comics character who didn’t make the trip over to DC with Plastic Man and Blackhawk. Did Landau have a hand in the creation of this character, and did he continue on for the run of what must have been a pretty brief series?

STEVEN BROWER: Landau was one of several artists, both before him and after, who worked on The Sniper, and out of the handful of Sniper stories that are known, the only one to be signed by Jay is the one that was scanned and used on my PRINT article…a printed copy of that issue of MILITARY COMICS was in his personal collection.

There’s not a lot out there that we can point to as his exclusively, and the fact that he would sign his work ‘Jay’ or just the letter ‘J’ makes researching his work that much more difficult. He told people he shortened his name because of anti-Semitism, which wasn’t unheard of certainly, although the majority of people in charge of the comics business in that era were Jewish. I never got to meet Landau before he died in 2001; I would have loved to talk to him about his comics experience, and try to clear up some of the questions that remain.

Did he tend to be tight-lipped about that interval of his life, having been hailed in his later years as a “serious” artist?

People who knew Landau and knew his work were aware of his background, and he’d talk about it with anyone who brought it up; he’d mention it in the classes that he taught at Pratt Institute. He clearly enjoyed the experience, and was quoted as saying it was ‘great fun’…the only reason it didn’t become more widely known was that the fine art people, the gallery owners and buyers, didn’t ask him about it and didn’t seem to know.

Well, what little we know is largely the result of your own thrilling detective work on the subject! What served to spark that interest in you, of chronicling the comics career of an artist who, ultimately, wasn’t much more than a footnote in the history of mainstream comics?

The exhibit that Monmouth University had in their library a few years ago was what started it for me, and also what inspired me to explore the comics connection with Landau. I was teaching an Art Appreciation class there at the time; I took my students over to have a look, and upon seeing his work in person I was struck by two things — one, the very definite influence of Pushpin Studios, and two, the influence of comics art. I wasn’t even aware at first that he had an actual history with the business.

What really made me want to write the article was the video that they had put together for the exhibit. In it they mentioned that he worked for Marvel Comics, and they mentioned him working on Captain Marvel — the old Fawcett Captain Marvel — which was just not correct. They also showed some comics from the 60s and 70s — Captain America, Avengers, Sgt. Fury — that were done by Jack Kirby, so I needed to set the record straight. It turns out the images they showed were comics that were found among Landau’s effects after he died…it was obvious that he never lost interest in comic books.

You’ve absolutely been the biggest proponent for the veracity of Landau’s claim, that he was part of the team of freelancers who assisted Kirby and Joe Simon on the first ten issues of their CAPTAIN AMERICA book. You’ve even pinpointed, I think, issue number 5 as one that really bears the fingerprints of Landau’s style. But Norris Burroughs, in his blog dedicated to “Kirby’s Golden Age Captain,” doesn’t commit to anything more than “perhaps we can entertain the notion” that Landau was one of Cap’s inkers.

I take Landau at his word, and I understand that Norris would just want to exercise caution, without a whole lot of details as to how Kirby and Simon worked on those early issues. What’s interesting is that I arrived at Landau’s involvement with Captain America while researching Mort Meskin‘s involvement (NOTE: Brower is the author and editor of two volumes from Fantagraphics on the life and career of Meskin; books that remain THE go-to works on the unjustly neglected artist behind Johnny Quick and other Golden Age greats). But it seems they both put in time with Simon and Kirby — as did half the comics industry — and oddly enough, there are elements in those stories that look like Landau’s work.

Landau said that he came to work on Cap through an agent, which seems unusual for the time, but I was able to confirm that there were agents for freelance artists back then, particularly for someone who also worked on the pulps like Landau did. The fact is that he was never at the head of the pack of comics artists; he might have gone on to do some major work in the years to come, but he was doing this right before he was drafted to serve in World War Two. 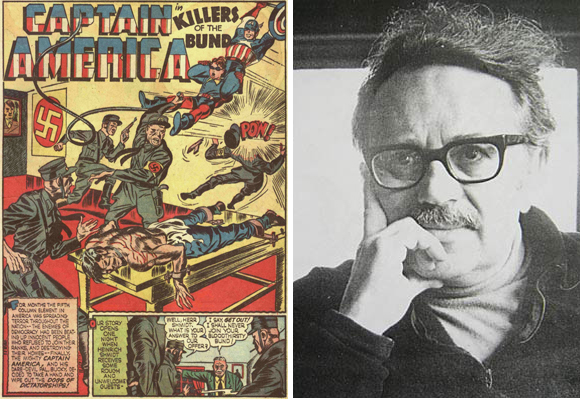 The late Jacob Landau is pictured with one of the Simon-Kirby studio CAPTAIN AMERICA stories that he likely worked upon.

Being in the army seemed to sharpen Landau’s passionately humanist, anti-war outlook, and as the new exhibit makes clear, those themes continue throughout his later work, particularly the “Holocaust Suite” of lithographs from 1968. But even though he continues to draw while serving in the Mediterranean Theater, he never returns to comics when he gets back Stateside, correct?

He never did, but he went on to work more in the pulps, and then did a lot of book covers and children’s books; a lot of interesting stuff, before concentrating on fine art.

As to whether he might have returned to comics, it’s hard to say as the industry hit some hard times in the 50s, and shed hundreds of artists around then. A lot of them would return when comics got big again, and a lot of them went into commercial art and advertising. I’m actually working on an article for Comics Journal right now, on all the artists who went into advertising.

The other side of the coin is that a lot of people, like Mort Meskin, were not treated well at all by the comics business. So I think that Landau managed to find his way as well as anyone — he moved logically from comics to pulps, to illustration and eventually to fine art.

He may have left comics, but did the comics necessarily leave him? I was amazed by how much his work from the 1960s, especially the color illustrations he did for the writings of Hoffmann, resemble paneled layouts and splash pages…they’ve got that proto-psychedelic, rock-poster thing going on, like something Steranko would have done for Marvel in 1968.

Right; the storytelling in those pieces, especially the series, was sequential. You couldn’t miss the influence, if you were familiar with what the new generation of comics artists was doing in the 60s. Landau was very much a man of his time, you know, the 60s and 70s. Scott Menchin, who studied with Landau when he taught at Pratt, told me he’d come right out and say that he ‘really missed the 1960s!’

Well, we look forward to your presentation on Landau and comics on April 17…you and the folks at Monmouth U have done an awful lot to introduce this artist to new audiences.

Monmouth University owns the pieces they’re showing, along with a wonderful collection of illustrated manuscripts and such; Landau’s estate donated everything to them when they dissolved the Jacob Landau Institute a few years ago, and the people at Monmouth have done a great job of promoting him.

I’m very happy to have been asked to talk about that aspect of Landau’s life, and I think that when you consider his career it really puts it all into focus. He obviously maintained a real interest in comics over the years, and in the end his work showed those influences.

Steven Brower visits Monmouth University to talk about Jacob Landau’s comic book connection on Thursday, April 17 at 4 pm. Take it here for details on the ongoing exhibit — and here to order either of Brower’s excellent explorations of Mort Meskin, from Fantagraphics Books.

Tom Chesek will MC the panels at the Asbury Park Comicon April 12 and 13 and moderate the Marvel in the 80’s panel on Sunday April 13th.