Greetings From Gotham City has a nice ring to it, doesn’t it? Jersey Shore pop culture maven Tom Chesek posits that Batman’s hometown is smack between Atlantic City and New York. And he’s got proof!

Tom Chesek offered this wonderful piece about Asbury Park and its connection to Batman. He knew he was pitching to the right guy. Not only am I a Batfan of the first order, but I was born in nearby Neptune, my mother is an Asbury Park High School grad, much of my family hails from the area — and my partner in all this is Cliff Galbraith, founder of the Asbury Park Comic Con. So while you and I know that Gotham is really New York — shhhhhh — Tom makes a really persuasive argument for a town where I spent many happy days as a kid at the beach. — Dan 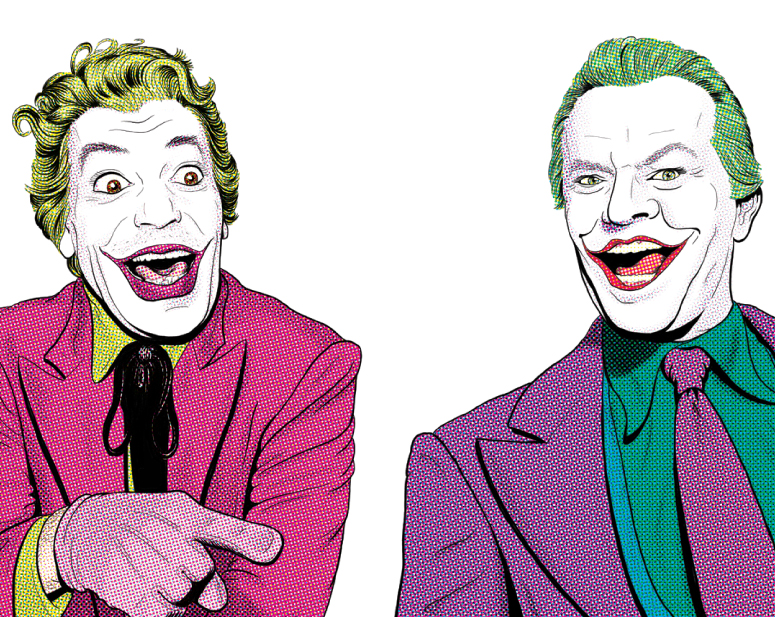 What a couple of Jokers! A superb illustration by Asbury-based Jason Robinson.

Although its exact GPS coordinates have been scrambled by ionic continuity-storms and various multiverse brainfarts, it’s been more or less accepted wisdom for the past quarter-century that Gotham City sits squarely within the state of New Jersey.

While scholars of the sequential arts have placed Batman’s bailiwick anywhere from Jersey City (where The Gotham apartment house “cuts a unique outline”) to Vineland in Cumberland County (where the infamous eugenicist Dr. Henry Goddard first coined the word “moron”), we submit that Gotham’s Earth-Prime sister lies somewhere in between, at a place Where the City Meets the Sea — a place called Asbury Park.

The connections and coincidences linking Old Gotham to Asbury are undeniable and irresistible — starting with their carefully mapped-out designs by Judge Solomon Wayne and founder James Bradley respectively. Each would have its heyday as a fast-growing center of commerce, and as a barely contained capital of crime, played out on dark and desolate streets. There would be times during which the cities would be held hostage by twisted visionaries — and times when it appeared as though the denizens of the local Asylum had assumed control. Each would ultimately, arguably, get the mansion-dwelling, backstreets-patrolling hero it deserved. 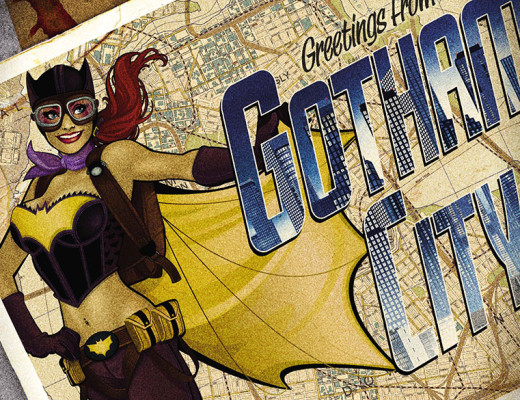 The realities began to converge in the late 1920s, when a young go-getter of Cuban and Italian descent secured one of his first jobs, as a clerk in Betty Ruben’s Sports Shop on Asbury’s Cookman Avenue. Though he’d make his first big splash in Hollywood as The Cisco Kid — and the studios would mold the lifelong “confirmed bachelor” into a Latin Lover of exotic pedigree (his mom was reportedly the daughter of legendary Cuban freedom fighter Jose Martí), Cesar Romero was a resident of nearby Bradley Beach, when he attended Asbury Park High School for two years (his sister Maria would later teach on the faculty there).

Years after his leading-guy luster had gone gray, Romero caught the fancy of an all-new generation when he donned the green wig and purple suit of the Joker in Bill Dozier’s game-changing Batman series and its ’66 feature film. Striking just the right campy tone for the occasion — and putting forth an infectiously cuckoo-for-Cocoa Puffs energy — the kid from APHS made an indelible impression that kept him working in films and TV well into his ninth decade. While many modern Bat-ficionados prefer their Jokers a bit more malevolent, the release of the Batman ’66 Blu-ray set has prompted a fond reassessment of Romero’s brand of candy-colored vaudeville villainy — and the digitally remastered images have made abundantly clear what wasn’t always apparent on the black-and-white Admiral back in the day: that he truly continued to sport his signature mustache beneath the Joker’s ghastly greasepaint. 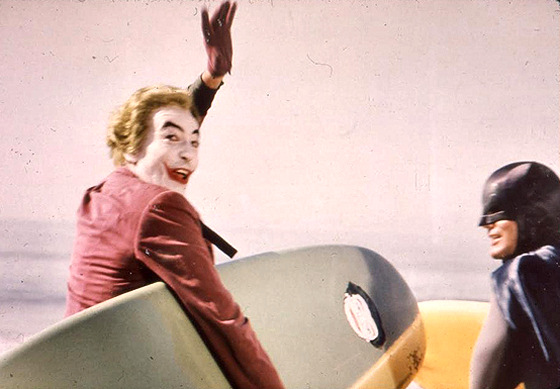 The Joker and friend hit the beach.

Even as Cesar Romero was appearing opposite Shirley Temple in 1937’s Wee Willie Winkie, an infant by the name of Jack Nicholson was born to a household in nearby Neptune City headed by a maternal figure named “Mud” — and intermittently featuring an older-sister figure named June. It wasn’t until 1974 that Jack, by then the celebrated prince of the New Hollywood, learned that “Mud” was actually his grandmother, and “sister” June the former showgirl who’d borne him out of wedlock.

As a young beauty in the chorus line, June Nicholson had done a tap act at Asbury’s Monterey Hotel, performed with Earl Carroll’s Vanities, and danced locally with Shore-area vaudevillians Donald Rose and Eddie King — both of whom were rumored at various times to have been the father of the Nicholson boy. It was King who was often seen running errands about Asbury Park accompanied by young Jack (whose comic book of choice, Batman, was in the words of biographer Patrick McGilligan “the house of his favorite villain … the Joker”). And it was Jack — operating with a malevolent leer that seemed to draw from both his own persona, and from Asbury’s iconic grinning gremlin Tillie — who defined the Joker for a new generation, when Tim Burton jumpstarted the latter-day superhero genre with a wink and a nudge in 1989. 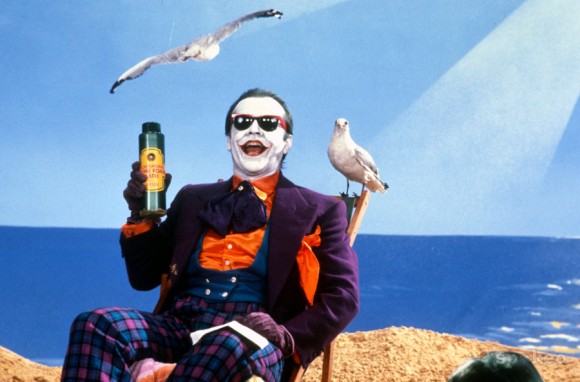 The Joker just can’t stay off the beach.

The serial Oscar-winning screen legend has returned for impromptu, low-profile visits in recent years — and when he accepted his third Academy Award before a worldwide audience in 1997, Nicholson thanked a laundry-list of recently deceased friends that included former Asbury Park Mayor Ray Kramer, for reasons that must remain clear only to Jack.

While it would be the late Heath Ledger who’d spirit away the Oscar gold as Gotham City’s Clown Prince of Crime, Asbury Park would stake further claim to another pantheon Batman baddie — the Penguin — when local guy Danny DeVito took on the role of the freakish fowl-deed doer in Burton’s 1992 Batman Returns. At just five foot solid from the boardwalk boards, the former sitcom supporting player seemed an unlikely movie star — but the diminutive dynamo had entered the ’90s as an A-list actor (Romancing the Stone, Tin Men) and an in-demand director whose first big assignment, 1987’s Throw Momma from the Train, had been given its major premiere party at Asbury’s downtrodden Paramount Theatre (he’d outfit the mildewed landmark with an all-new projection booth for the occasion). 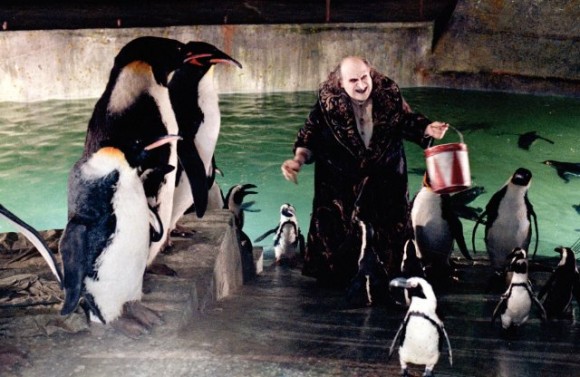 The Penguin prefers the pool, but that’s OK.

It was a fitting homecoming for the Springwood Avenue storekeep’s son who attended Our Lady of Mount Carmel Grammar School, then worked (as “Mr. Danny”) in his sister Angela’s hair salon after graduation from high school. A role in the Off Broadway production of One Flew Over the Cuckoo’s Nest (and a connection to his good friend and roommate Michael Douglas) landed him his first fllm role opposite none other than Jack Nicholson — who he’d go on to co-star with and direct in Hoffa.

Having creeped the bejeezus out of audiences with his surprisingly dark and un-Meredith-like interpretation of the Penguin, De Vito would continue to maintain a part-time residence in neighboring Interlaken — and would even take part in one of the all-star bocce tournaments organized by ex-cop and local legend Anthony “Putt Putt” Petillo. 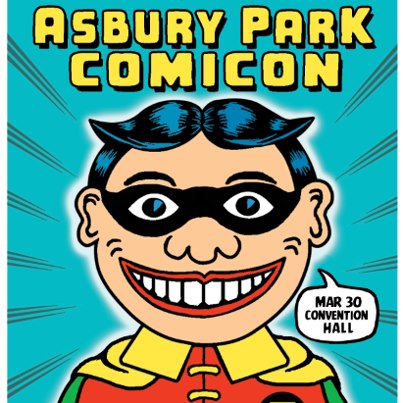 Tillie, the Boy Wonder: Mascot of the 2013 APCC

Of course none of these old Asbury habitues would be delineating the denizens of Gotham’s underworld were it not for the groundwork of Michael E. Uslan, executive producer of the latter-day Bat-franchise and a comics writer/scholar/collector who grew up just outside city limits in nearby Deal. The fanboy who’d be there for the very first comic conventions in the 1960s — and who’d go on to pen the memoir The Boy Who Loved Batman — made a homecoming of his own in 2011, when he chose the Asbury Park boardwalk and beachfront as the setting for a daylong Bat-fest of signing events, screenings and speeches.

And it was there, within the seedy-but-still-grand Convention Hall of a city that many had given up for dead at the end of the past century, that some next-gen keeper of the flame surely stood transfixed; scheming of future days, and myriad ways, in which the salty old seaside city will continue to advance the lore and legend of grim Gotham.

You can find more of Jason Robinson’s amazing portrait work online at wavemanstudio.com — and watch for Tom Chesek’s book Legendary Locals of Asbury Park, coming in spring 2015 from Arcadia Publishing.