“Gotham, that great cesspool into which all the loungers and idlers of the Empire are irresistibly drained…”

Every once in awhile something so colorfully offbeat comes over the transom, I just have to share.

In this case, it’s a series of photos sent over by David DeVenter (alias New Jersey BatDave) — master cosplayer and star of a million popular online videos touting his love of all things Bat. (He’s also a well-known connoisseur of old-school TV and New Jersey food joints.)

Dave’s been in these parts before (click here) but now he’s back with a clever Halloween idea that I think you’ll dig. 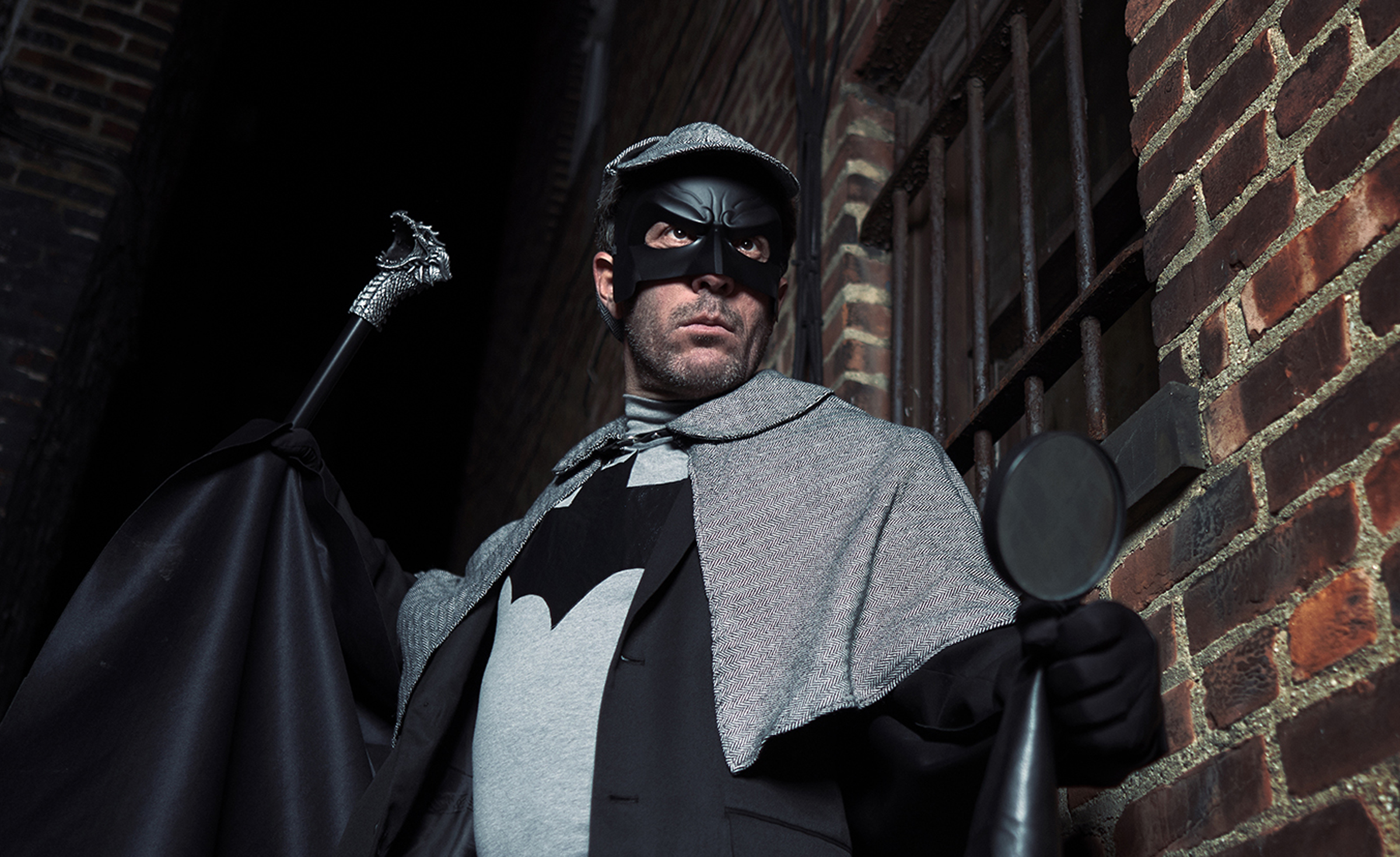 The concept of merging the best attributes of Sherlock Holmes with that of his spiritual descendant, the Batman, is nothing new in popular culture. Relentless and grim, shadowy figures of the night using their keen intellect and robust physicality to solve fascinating crimes deemed baffling to lesser men, the many comparisons between these two World’s Greatest Detectives from different centuries are quite obvious.

The visionary 1989 DC graphic novel Gotham By Gaslight, by Brian Augustyn, Mike Mignola and P. Craig Russell, gave us an intriguing hero who was two-thirds Caped Crusader and one-third Victorian Age sleuth. It was brilliant stuff but this swashbuckling version of the hero was disproportionately more Batman than Holmes. 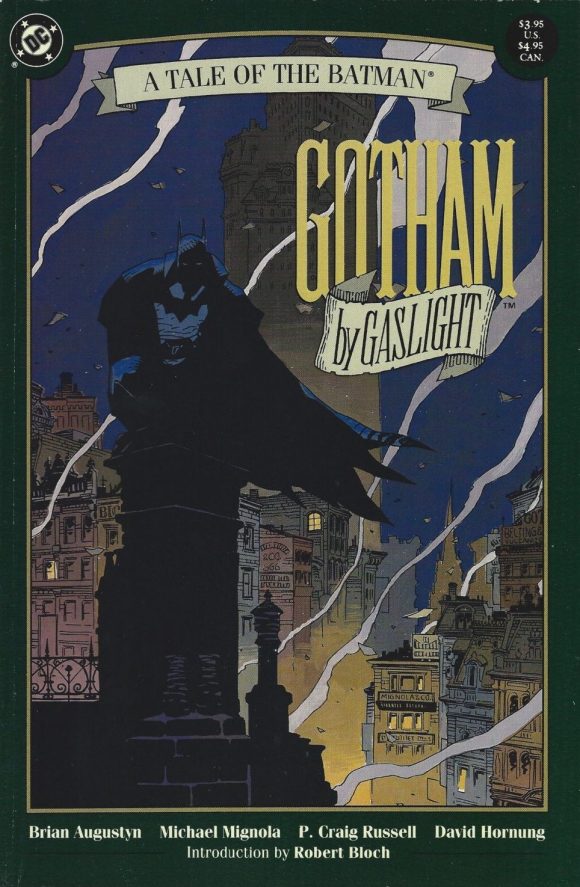 A few weeks ago, I was chatting with my 81-year-old father who enjoys retelling tales of his glorious youth. Tales of growing up poor but carefree in gritty Newark (the mini-NYC of northern New Jersey) when he casually recalled being 9 and bumping into actor Basil Rathbone on a train. He was struck by how dashing a fellow he was in real life as well as on the big screen.

A few days later I was enjoying a wonderful old 1940s Rathbone-powered Sherlock Holmes” movie on TV only to awaken in the middle of the night with a novel idea that would not leave me: What if I could create an alternate crimefighting hybrid of the two heroes? One who was clearly more visually attuned to somber Holmes than to colorful Batman; less flashy and more grounded in a procedural world of investigation, yet still populated by larger-than-life villains set against a grimy Victorian Era Gotham City backdrop? Thus was born BATLOCK HOLMES, THE DARK SLEUTH. 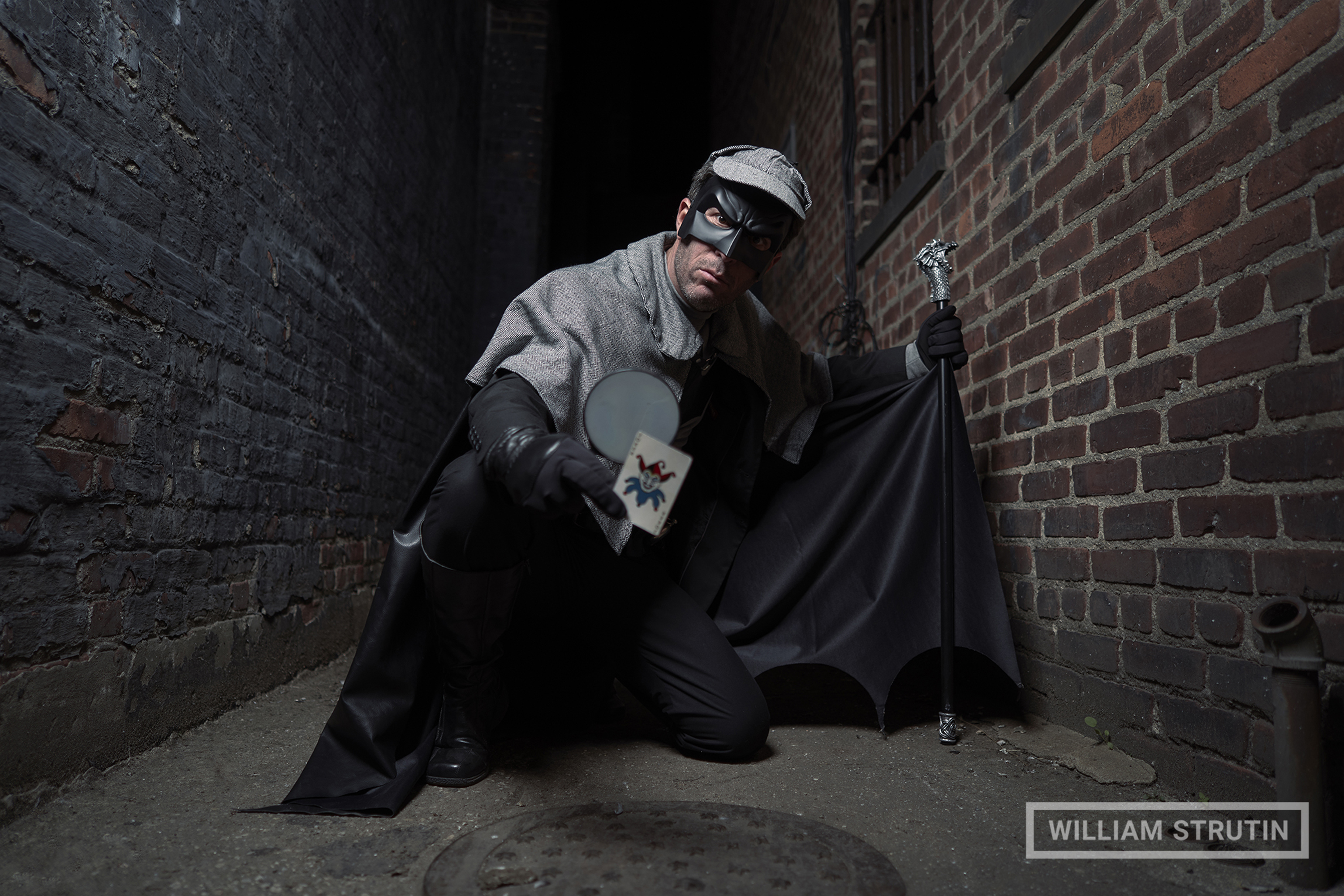 I have long felt that Warner Bros. needs to produce a motion picture of “The Bat-Man,” focusing on his lawless first two years, 1939 and 1940. No big-name actors, no silly CGI, no distracting crossovers. Just one intense man on a very specific mission: Clean up the city that he loves in a mysteriously anonymous fashion, or die trying. Something similar to what I’m attempting here.

These images are a mere rehearsal of sorts; a dry run for a six-part cliffhanger fan film that will most certainly never be made. But I have a small army of incredibly talented costumer friends ready and willing to bring Batlock Holmes’ supporting cast to life at upcoming comic conventions and photo shoots. The Laughing Ghoul, Robin Watson, Midnight Feline, Professor Hugo Moriarty, Split Skull… 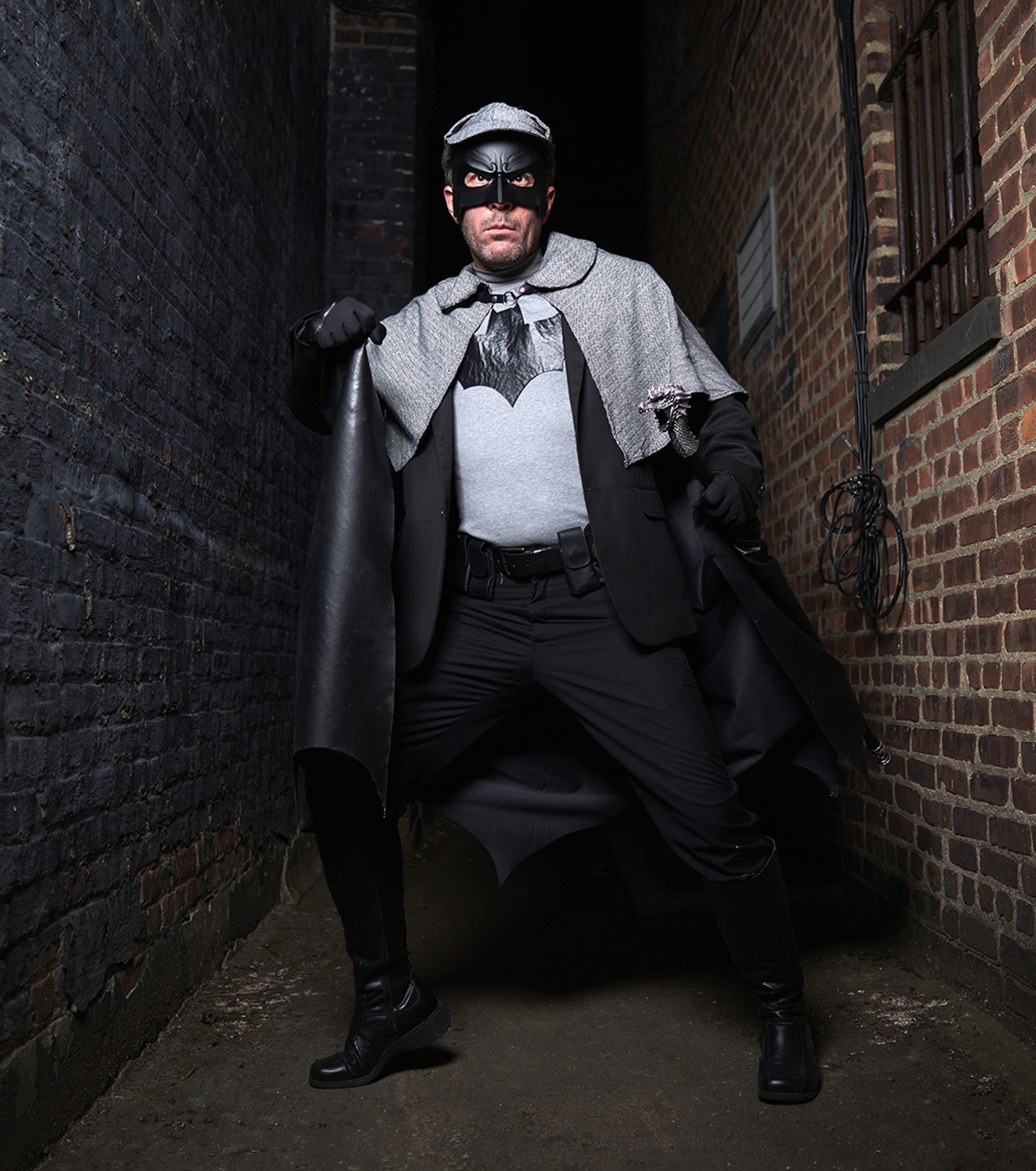 As an avid fan of both characters since before I could even read a book, a project like this is a true labor of love. So, once again, the game is afoot…  Batlock Holmes is the Dark Sleuth.

And everything else is elementary, old chap. 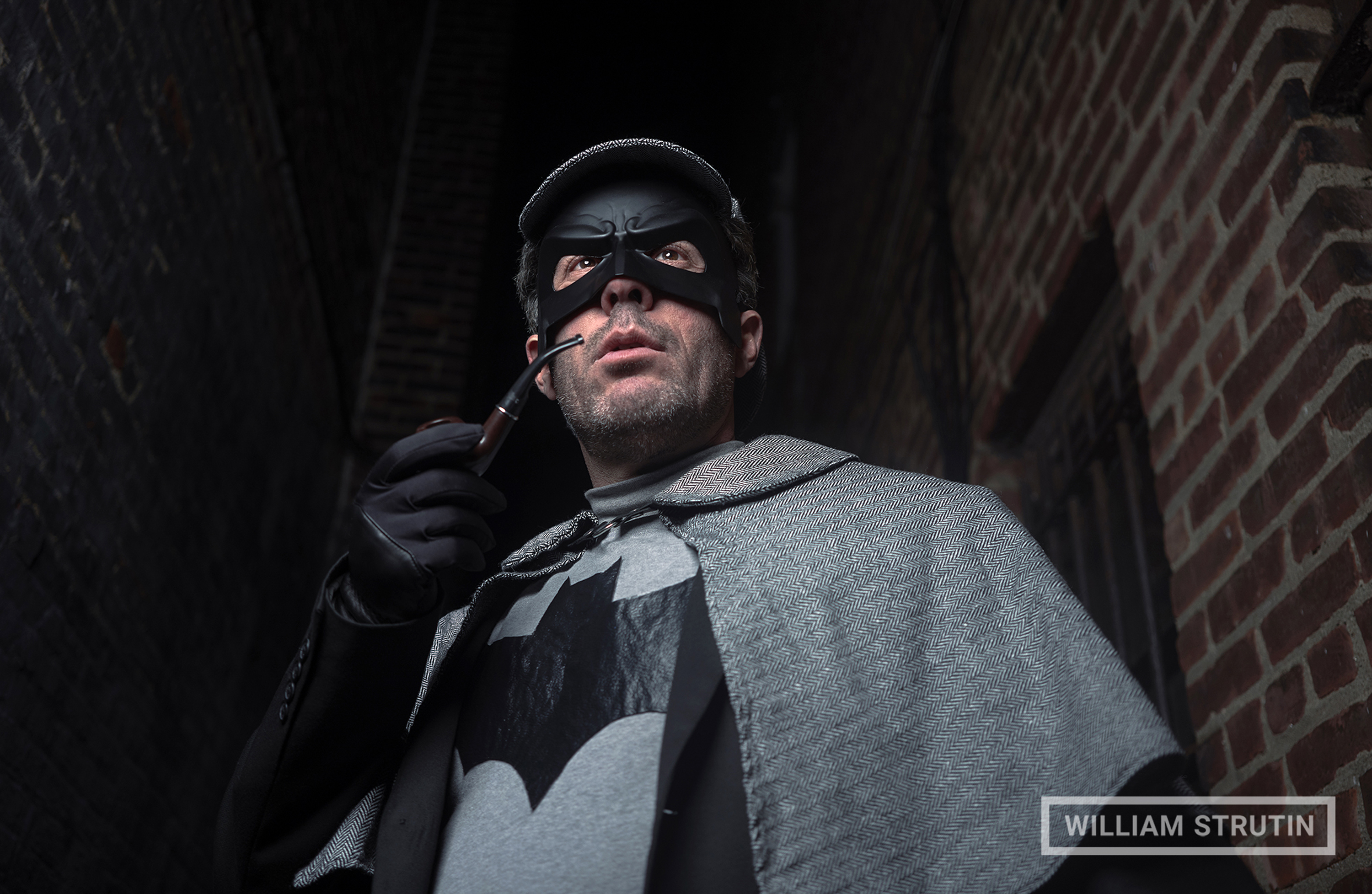 A sincere thank-you goes out to shopkeeper Steve Nemeckay at Amazing Heroes in Union, N.J. (click here) for providing our atmospheric tunnels and alleyways. And bravo to ace photographer William Strutin (click here) for capturing these stark images on a chilly October evening in northern New Jersey. — Dave 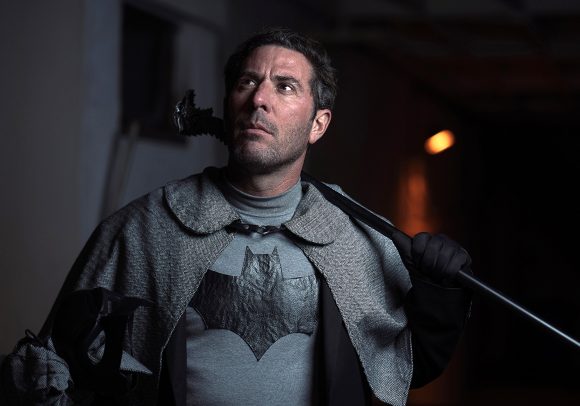 — New Jersey BatDave: A Fan Who Deserves His Own Batsignal. Click here.